General Rection on the rise

Today’s wrestling is full of swearing and sexual innuendo, a progression that mirrors the more liberal attitude of TV in general. 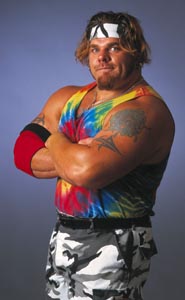 But what happens when a father has to explain to his daughters, aged seven and five, that the company he works for has changed his name from Hugh Morrus, “The Laughing Man,” to Hugh E. Rection?

“They weren’t smarted up to that at the pay-per-view I was going to change my name to Hugh E. Rection,” explained Bill DeMott, aka General Rection in WCW.

“My seven-year-old has come to terms with Rection. … She said, ‘I’ve got it Dad! I know your name!’ I sat there and swallowed my tongue. She said, ‘You’re Rection because you’re the director!’ I said, ‘You’re exactly right.'”

No one would blame The General if he was frustrated with his role in World Championship Wrestling (WCW). He was Hugh Morrus for five years, spinning his proverbial wheels, never getting the attention or the push that he felt that he deserved.

He started wrestling in Brooklyn, and went to Germany about four months into his training, then to Puerto Rico, Japan and Mexico. The General is much more talented that what is seen every week on WCW shows.

“My styles are actually a lot different than what I portray on TV,” he said from a WCW house show in Oklahoma. “They’ve actually asked me to tone it down. It’s been a rough transition.”

But things finally are starting to come around. The Misfits In Action are taking off, with DeMott at the forefront. He’s the leader of the WCW “cast-offs,” including Corporal Cajun, formerly Lash LeRoux, Private Loco, previously known as Chavo Guerrero Jr., and A-Wall, who used to be just The Wall. And the team is involved with a feud with the Lance Storm-led Team Canada.

DeMott has nothing but good things to say about Storm. “He’s tremendous. He’s a great athlete. He’s a professional 24 hours a day. I would never have anything negative, I would do anything for him.”

It’s been great for DeMott, who has had to bring some of his international experience to the ring to compete with the world traveler Storm. “He’s making me work to the way I used to work, which I appreciate.

“Now I’ll get back to my Japan roots, and Mexico, and hopefully get really going with Lance and have some knock-down, drag-’em-out matches.”

DeMott’s career really took off when he went to Puerto Rico for the first time. “It was supposed to be two weeks in opposition to Carlos Colon. I wound up working there for two and a half years straight.”

After that came Japan, where he worked for three years, going back and forth to Mexico. (Contrary to web reports, he never wrestled in Canada as Jason The Terrible.)

He credits two men for really helping him out on his road to becoming a successful professional wrestler. One is Rocco Rock of Public Enemy. “We’ve been up and down the road for years and years together. He’s really directed me as far as wrestling and dealing with the business and how to handle things.”

The other is Ricky Santana, whom DeMott has just reconnected with, as Santana was hired by WCW as a road agent. “Ricky was one of the guys in Japan who was teaching me different things, actually taught me more than he knew! So it’s worked out for me. It’s nice to see him back and now there’s someone else plugged my abilities to the office and say ‘Hey, we can have him do this stuff, whenever you guys are ready.'”

Overall, DeMott has no qualms about his training, and the fact that to succeed he had to travel the world. “I was learning as I was earning. I was one of the lucky guys,” DeMott said. “There’s a million guys in this business that want to get an opportunity. I’ve always had the opportunities and they’ve always fared real well for me. Things seemed to slow down for me when I got to World Championship Wrestling.”

In WCW, he was thrown into the Kevin Sullivan-led Dungeon of Doom as Hugh Morrus, and later into Jimmy Hart’s First Family. Yet it wasn’t until this year’s Slamboree, where he faced Scott Steiner for the U.S. title and changed his name to Hugh E. Rection that he had a high-profile match on a pay-per-view.

“I got used to being one of the 300-pound guys who just punched and kicked,” he said.

The promotion to General Rection came courtesy of Booker T, who temporarily had reverted to his old G.I. Bro persona.

“I think the General Rection thing was an attempt to try to change something that they thought wasn’t working,” DeMott said. “As far as Hugh Morrus and the direction of the company was going in, it’s pretty much the same character. I think the name change was almost a dig to the powers that be.”

He truly believes in the M.I.A., and his teammates. “The group is real strong and the guys are good, they’re young and talented.”

Many see the Misfits as WCW using a bunch of lost-in-the-pack mid-carders as a unit to create a stronger entity. “I don’t know if the guys were lost or maybe they just weren’t figured in. Yeah, it’s given everybody, at least all of our guys a direction where we’re going.

“Chavo Guerrero works the same as Lieutenant Loco, Cajun works the same as Lash, well the Wall is just the Wall. We’re all doing the things that we’ve always done, but now I think we’re in a better position to showcase a little more. Actually, we feel comfortable with the Misfits, and it’s a good group and we’re jelling well together.”

Clearly in the sights of the M.I.A. is Team Canada. With Hacksaw Jim Duggan joining the Canadians, it’s thrown the feud in a different direction.

“Now the focus after Fall Brawl, which the story is now, [is] I’ve lost the girl [Major Gunns], I didn’t bring the U.S. title home, it’s still the Canadian title and now I’ve lost my best friend. So the story’s gotten a little personal and it will be real interesting to see what happens from here on out.”