Cappetta reflects on the business 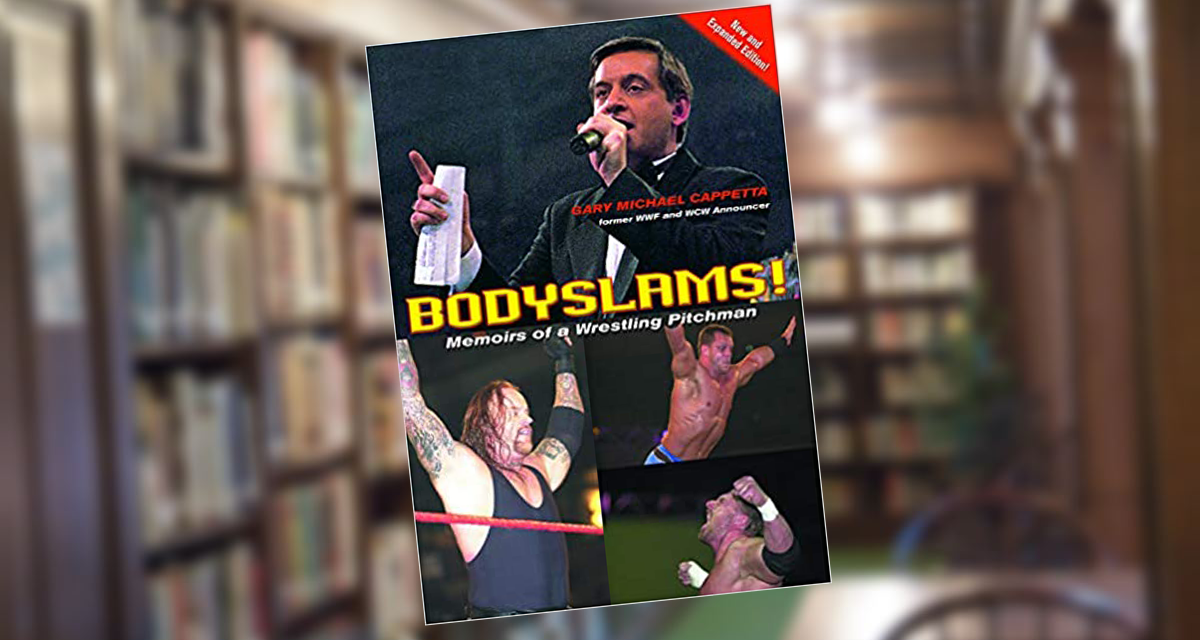 There likely isn’t a veterans armory, high school gymnasium, college auditorium, roller rink or decrepit hockey arena in the north eastern part of the United States that Gary Michael Cappetta hasn’t seen the inside of.

For 21 years, Cappetta travelled the highways and backroads of the U.S. as a ring announcer for promoters such as Vince McMahon Sr., Jim Crockett Jr., Verne Gagne and Vince McMahon Jr. Perched on a ringside seat at some of the biggest wrestling events of the past twenty years, Cappetta took in the sights, smells and sounds of professional wrestling from a very unique perspective.

Now, five years after leaving the business, Cappetta has written Bodyslams! – Memoirs of a Wrestling Pitchman, a book with his intimate, first-hand observations of the wrestling industry.

Cappetta admits that the book came to fruition almost by accident.

“When I first started to write, it wasn’t with the intention of writing a book. I had kept a diary through a lot of the years that I was announcing, mostly with WCW,” Cappetta told SLAM! Wrestling over the phone from his home in Monmouth County, New Jersey. “When I came off the road in May of ’95, my last show was the Slamboree pay-per-view, it was quite an adjustment after having traveled the way I had traveled and lived the way I had lived to settle back down. At first, writing was a therapeutic exercise. And then as I started to write, I just kept on writing. I kept out of the work force for two years and I sat at home and I kept on writing along and then it evolved into a book.”

Cappetta insists the book is as much an observation about himself as it is of the business.

“I portray myself as a real naive bumpkin, because I was for a long time,” admits Cappetta. “I was very controlled emotionally by the business and I was very afraid of things. Just by my voice that carries through the book, that’s revealing of myself. It’s an observation of the business and a report of my experiences.”

But it isn’t the observations about him that are creating a buzz. In the book, Cappetta writes frankly and honestly about the behaviour and indiscretions of wrestlers he worked with during his career as a ring announcer. Cappetta maintains that he wasn’t out to expose anybody and was mindful of not hurting anybody with what he wrote.

“People have different opinions as to whether or not what I’ve written is hurtful. I don’t think so. I had a couple of rules that I followed. One was that I didn’t say anything about anybody that didn’t say about myself. I was very honest about my foolishness, too. I also refrained from writing anything that I felt would injure someone today. For instance, if I knew that there was a wrestler on the road, who was cheating on his wife, and if he is married to that person today, there is no need to write about that. It’s a very honest book but I have no intention of hurting anybody.”

“When I do talk about that thing, their wives were very well aware of it and divorced their husbands because of it,” continued Cappetta. “As far as I’m concerned, if you’re a public figure, and you’re going to reap the benefits of that. You have a certain responsibility and if you don’t understand that or you’re if not a responsible kind of person then maybe you should find a different kind of job where you’re not out there in the public.”

Cappetta feels strongly that pro wrestlers, because they are public figures, should conduct themselves with a certain level of decorum at all times

“I have a great deal of respect for wrestlers and what they do. But in all industries, just like education in the classroom, there are jerks. When they’re out on the road, even if they’re not in the ring, they’re representing the company. If they’re going to appear in front of millions of people on a Monday night, we can’t separate what they do in a restaurant. So if they’re going to stand up and start turning over tables in a restaurant, and people know who that is, well you’re damaging the promoter you’re working for. And I think they have a responsibility to that. So, I did draw lines (in the book) and I was very aware of that. Now, there may be people who disagree with me as far as where I drew my line. People need to lighten up a little bit.”

Cappetta recounts stories and events in the book that have taken on legendary status in wrestling-lore. He was at ringside the night in 1994 when Mick Foley lost his ear in Germany and describes the event in great detail in his book.

“Mick had been doing the spot for a long time where he wrapped his head (in the ropes) and did the “hangman.” The ropes that night in Munich were extra tight and the referee we had was (from France). I was sitting on the other side of the ring. I saw Cactus flip though the ropes and I didn’t (think anything of it). The ref bent down, and he gingerly picked up something, he didn’t know what it was and he yelled something over at me in French and then he tossed it, and it flew through the air. And I had no idea what was flying at me and it flapped on the mat in front of me.”

“I looked at it and he came over and started pointing to the side of his head,” continued Cappetta. “And it looked like a piece of uncooked chicken fillet with some hair in it and a little piece of athletic tape. So I picked up the ear and started rushing to the back to find the doctor because we needed to put it on ice. When I went to the back (Ric) Flair was in charge. He asked me, ‘What are you doing here?’ And I said, ‘Ric, look at my hand. I’ve got Cactus’ ear.’ He said, ‘Are you okay? Is there something wrong with you?’ And I said, ‘Ric, look at my hand.’ And he started to study my hand. And all of a sudden all the boys started gathering around, some of them were grossed out.”

More than anything else, Cappetta remembers Foley’s reaction to having his ear severed from his head.

“Before I got back out onto the floor, Mick was walking towards me as I’m walking towards the exit to go onto the floor. He’s got blood streaming down his face, his hand is over the side of his head and with a glazed look and a little smirk he says to me ‘Bang, Bang… I lost my ear!’ Very bizarre.”

Cappetta was also present for the infamous stabbing incident between Arn Anderson and Sid Vicious during a tour of Europe and dedicates an entire chapter to it.

“In Bodyslams I take you to the background of what lead up to that day. That was just not an isolated day. We had been booked for a house show in Phoenix on Friday. We had a pay-per-view on the east coast two days later so everyone flew over. The morning after the pay-per-view we were flown to Atlanta, a few hours later flown to England, and the next morning we arrived and that was the morning of the first show that we were to do. Everybody was walking in their sleep. We did that show that night and then drove through the night to the town where the fight took place.”

“There was beer on the bus. And when we got to the hotel, we got there around 1 a.m. and they had the bar open,” recalled Cappetta. “And Sid and Arn were among other guys who hung out and started to drink. Well, they hadn’t had sleep since the Friday before, this was the Tuesday and that was a set-up with alcohol for guys to speak their mind. That really set the stage for anything to happen.”

“I and some other guys went to our rooms right away. We tried to get some sleep. Those guys stayed behind and got into their argument. Arn’s room was across the hall from mine. Actually, I was terrified. I was terrified. At first I thought the boys were just fooling around and I didn’t know which boys they were, I just heard guys bouncing up and down the hallway. And I just thought the guys were drunk and were having some fun. But then I realized the seriousness of it.”

Cappetta’s fear turned to sheer terror when he left his room to check out what had happened.

“When I went out to the hall, they were taking Sid away and Arn was flanked by Doug Dillinger and Vader and Arn was covered in blood, and his upper-body was all lacerated and he was saying to Vader, ‘Leon, you know me… I don’t carry a knife.’ He was in a daze. By that time, the police were there, the emergency medical team had come and the carpeting up and down the hallway was all bloodstained. The executives back in Atlanta were wondering what was going on, the media was all around, by the next morning it was a matter of hours and the papers picked it up.”

In addition to the book, which Pro Wrestling Illustrated will run excerpts of from the Sid-Arn chapter in an upcoming issue, Cappetta has also written a screenplay, Fall For The Dream, that he’s currently shopping around Hollywood.

“It’s a wrestling-based movie script that will be published and available when people call in to order the book. It’s a companion reader to the book. I have an agent and he’s in touch with different studios and production companies.”