Hollywood Hunks: Anatomy of a stable 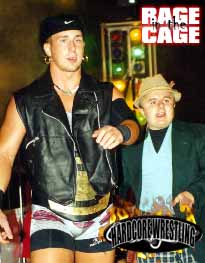 While WCW may have the New World Order and the WWF may have the Corporate Ministry, Ontario and area independent federations have the Hollywood Hunks to deal with as a major heel stable. This four-man and one-woman team has been raising hell in such promotions as the RWA and the Hardcore Wrestling Federation, where they agreed to be interviewed at a London, Ontario card recently.

“We were trying to think of an idea that would put us over as arrogant, cocky bastards, basically. So Mark (Mark Miller aka the Custom Made Man or Mr. Sunday Afternoon) and I were sitting there one day and he came up with the Hollywood Hunks, I came up with the name of the Box Office Smash being our finisher, which is a power bomb into a splash,” Stunning Sean (who admits his real name is Sean, but will reveal no more than that) remembers, adding “It’s the most devastating move in all of wrestling.”

The duo became a trio with the addition of the former Wildcat, now Sexy Baby Jamie Jackson, who had feuded with both Stunning Sean and the Custom Made Man as a babyface. Jackson stole the Hunks’ manager, the lovely Raquel away from Sean and Custom before Raquel led Jackson into the Hunks stable as a heel.

Outside the ring, the Hunks receive help from their manager, Raquel (real name: Rachel). “She plays an important role in the group. She does very good work,” Sean declares. “I can put in old tapes and chuckle and see what she used to do, but she’s got the confidence there. She’s right in your face.”

“There’s one thing we’ve got to stress with Raquel,” Miller deadpans. “And I’ve said this time and time again, but she is not the valet of the Hollywood Hunks, she is the manager. She’s been the manager for the last two, three years.”

“I’m obviously not as big as they are but I’m not afraid to get in there and get my hands dirty and say what’s got to be said and do what’s got to be done to get the job done,” Raquel says.

When asked about the changing role of women in wrestling managerial roles, Raquel notes that “I think it’s come a long way since the days of Elizabeth just standing on the side going ‘Oh my God, oh no’ and crying and stuff. You know, we’ve got Chyna and Nicole Bass and Asya. You know, they’re out there. They’re just as big as the guys are.”

Not content with just having a manager outside the ring, the Hunks recruited Otto Bahn (real name: Peter) to be their “Hollywood Agent.” Otto met up with the Hunks approximately a year and a half ago in the RWA. “Actually, Custom and I really got to know each other when we did a North Carolina tour for a week, which was a bit of a debacle.” Otto remembers, laughing. “But in the long run it was quite a good time. It was a good thing because it got us together, and it kinda brought me into the Hunks.” 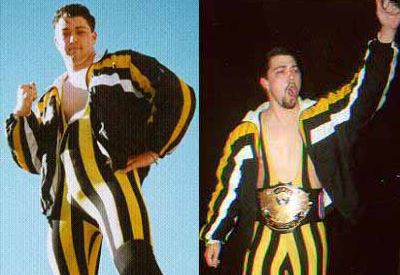 Certainly, Bahn is enjoying his time at ringside with the Hunks. “It’s great because these guys give me such a good time to do what I love best and that’s just working the crowd. I just love to make them hate me.”

But success in the ring didn’t come without a lot of training. “We had people from the (WCW) Power Plant train us and show us the ropes and stuff,” Sean says, acknowledging that much of the training came about because of Steve Buckley’s RWA organization. “He didn’t actually teach us. Like I said, we had people from the Power Plant. People we knew who went down to the Power Plant, they came down and they taught us what to do and show us the ropes. And people who were trained by the Hart Family came over, showed us the ropes.”

The Custom Made Man is also quick to give credit to another Ontario-based tag team. “Basically, it was the All-Knighters that helped us along down the road. They just introduced us to what it feels like to actually be hurt, doing tag matches with them, so they’re a big inspiration.” The Hollywood Hunks agree that the All-Knighters are their favourite tag team to wrestle.

The RWA may be gone, but Miller won’t say anything bad against the organization. “People like to knock the RWA and I thought it did a fantastic job,” Miller admits, adding, “Honestly, to this day, I believe it’s because of the RWA that the indies are really hot right now because the last three, four years, what was out there? It was just the RWA, and then other independents (are) coming in.

“The RWA did good with 500 fans to maybe 50 fans,” Miller says. “We once wrestled in front of nine people one night, but we still had the heart to go out and do it.”

“He did a good job, I’ll give Steve Buckley that. We did a really good job. We helped him out along the way. The reason why it shut down, I guess he’d just had enough,” Miller said. “And then the Hardcore Wrestling Federation was interested in us, and the AWF welcomed us in.”

As a group competing in independent organizations, the Hunks have had to battle to remain united as a team. “The AWF, they wanted me to break away from the team and be a face.” Miller says. “And they were calling Stunner the Hollywood Hunk, and I didn’t know what they wanted to do to Jamie but that upset me the most because I’d worked really for the team and I explained it to them ‘I do not want this team to be broken up.'”

AWF officials also had problems with Raquel and Otto Banz. “They didn’t even want me at first,” Raquel says, nor did they want Otto. 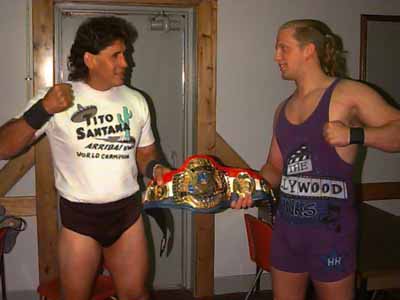 “Now they’re starting to realize that something good can come out of this, the five of us, because we bring a lot to a promotion.” Miller says. “We work hard for it. Like tonight, I think we did a good job.”

“We always do a good job,” Raquel interjects with a laugh.

“We just worked too hard on this team. We don’t want it broken up,” Miller says. “We can see this team just helping out. The promotions in general are helping us out, but we’re always returning it back, by always giving 110 per cent and whatever they want us to do, we’ll go out and do.”

“I think we’re all great on our own,” Stunning Sean says with pride in his teammates, “but when you’ve got the three of us together in the ring, plus the two – Raquel and Otto Bahn – outside. I mean, our energy level’s up.”

“It brings energy and it entertains the crowd,” Miller says. “That’s what we like to do is entertain.”

The members of the team all agree that being a part of the Hunks makes life outside the ring a lot easier.

“It is, definitely, because we always travel together. You know, you’ve got your car pool. All of us are going to one place together,” Jackson says. “We get along really well. We’re friends outside of the business side of it, so it’s great. I think it works out well for us.”

“And how much easier is it to travel with a buddy too? Somebody who’s always there for you?” Otto asks. “It’s a lot easier.”

For Miller, traveling is one of the best things about wrestling. “It was really good, a lot of traveling, meeting a lot of people on the road, just making friends all over North America.”

Miller also reveals that “we have our arguments now and then” but stresses that “I don’t think we’ve ever had a big argument, we just have little disputes now and then. We’ve never had an argument where we actually brought it in the ring to make us look sloppy. We know where it’s business and its professionalism.”

Sean says that’s to be expected though. “That’s like anything. You’re not going to agree 100 per cent.”

“We’re all really level-headed and listen to each other, that’s the big thing.” Jackson says.

While most stables historically have been heel (Four Horsemen, NWO, Corporate Ministry), Jackson and the rest of the Hunks believe that the two do not have to be mutually exclusive. “I think it all depends on the individuals because you can have good heel and face stables depending on how they work it.” Jackson also hints that the Hunks may not be heels too much longer. “We’ve had really a fun time doing the heel stable and it’d be interesting to try and switch it off, see what we can do as a face stable.”

“In this business, it’s easy to be a heel,” Sean reveals. “You walk out there, ‘shut up,’ people (think) ‘Aw, I don’t like this guy!’ It’s a challenge to become a face, so that’s the next challenge for us. Maybe later on, down the road, we might start liking some people. ‘I don’t mind this crowd. They’re cheering some of the stuff I’m doing so I’m starting to respect them now.’ If we can bring that crowd in, make them want to be interested in people who aren’t WWF status, or whatever, then you’ve done our job.”

“Otto and I, we have internet access so we’re trying to interact with the fans, over ICQ and email, like ‘What do you want to see from us?’ and then go out and do it,” Miller says. “And I think that’s what we’re trying to do with the team, get away from the old stuff and challenge yourself as faces. so eventually we can make our way towards face. It all depends on when it’s going to happen and with who and will it sound good.”

“The response has been pretty good already,” Otto notes. “It can only go up from there.”

The Hollywood Hunks have not gone unnoticed by “the Big Two.” During the WCW Monday Nitro broadcast from Toronto’s Air Canada Centre, Jackson teamed with fellow indy star L’Artiste to take on and defeat the Custom Made Man and Stunning Sean.

“We were that close with the WCW contracts, but it’s fallen through with our dark match,” Miller says.

They also netted themselves an interview with WWF Canadian President Carl De Marco.

“That was – WOW! – out of the blue. Just a phone call saying ‘I want to see the three of you in my office.’ That was probably the best Saturday I ever had,” Miller remembers.

Stunning Sean’s memories of the event are equally as animated. “Like I was actually nervous, just listening to the message on my machine. I’m thinking ‘Oh my God, is this really starting to happen?'”

“I thought it was a friend playing a prank on us at first,” Jackson admits. “Another (highlight of his career) would be, I’d also have to say also, The Jesse “the Body” Story, the movie that I was in. Definitely a high time for me, it was great, it was a great experience. I was so glad for the opportunity to do that.”

So, much like the movie stars that they patterned themselves after, the Hollywood Hunks are confident that fame, in the ring instead of the silver screen, will soon be theirs.

“One day it will happen.” Jackson vows. “It’s just a matter of where and when. Because the way I feel is that this team works so damned hard, it’s only a matter of time before it happens. Whether its the WWF, WCW, ECW, only time will tell.”