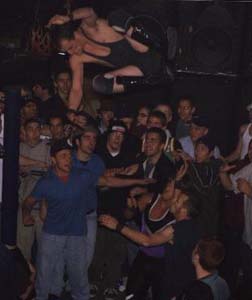 His opponent’s face is his canvas, barbed wire baseball bats are his brushes, and he only uses one colour — bloody red. Of course I’m speaking of L’artiste, the high-flying madman from Paris, Ontario. It’s been a while since SLAM! Wrestling last talked with the Indy sensation, but after seeing him dive off balconies and roll around in thumbtacks for the past year, we had to find out just what was going on in that head of his.

In all actuality he’s been up to a lot more then that, most notably starring in the Jesse Ventura movie along side WCW’s Kanyon, and wrestling a dark match in front of 15,000 people in Cleveland for Nitro. Between the two, it’s the Nitro match that sticks out most for him

“I wrestled in front of 15,000 people,” said L’artiste, pride very apparent his voice. “I had Hulk Hogan, Randy Savage, Kevin Nash, everyone that wrestled for WCW, I had them in my locker room. I was changing beside these guys — guys that I grew up with — and nothing, nothing, nothing will ever replace the way I felt at that moment, and nothing will replace the way I felt when I walked through the curtain and there was 15,000 people there.”

From there, however, times got hard. Contract negations started with WCW and L’artiste gave up everything to devote his time to the talks. After a while the negotiations went stale leaving him in a rough spot.

“I gave up everything I had for WCW when that whole opportunity came around. I was broke. I gave up my life to jump at the chance, and that’s what you have to do. Obviously I didn’t come through, but the chances of it happening are still there. I mean, I could be there sometime soon you never know, but right now I’m just trying to get my life together and just wrestling pretty much in Ontario now.”

Since then, he’s gotten back on track and has become one of the best-known wrestlers on the Canadian Indy scene. A lot of that has to do with his new harder image, although he’ll be the first to say he’s not a hardcore wrestler.

“I don’t classify myself a hardcore wrestler at all, I’m more of a cruiserweight, high-flying guy. I mean I did (the insane match between him and Bill Skullion at Ring n Ears 4) to prove that I can go hardcore, that I’m not this prissy, preppy, only can high-fly, can’t wrestle, cant go hardcore guy. That’s that’s why I did it.”

Well, about two hours after saying that very sentence he went in to a match where thumbtacks, barbed wire, mouse traps and a variety of other weapons were used in order to punish his opponent, so it’s very doubtful that wrestling in these types of matches is just a fad for him. In fact, it wouldn’t be surprising if a part of him actually enjoyed the pain.

And as long as he continues his reckless insanity in the ring, the fans will continue to follow him around chanting “He’s hardcore” for years to come.