Nicole Bass, the bodybuilder who performed in ECW and WWE, and later found fame as a regular on Howard Stern broadcasts, has died, according to her Facebook page. She was 52.

Her friend, Kristen Marrone, posted a detailed description of Bass’ last days on Bass’ Facebook page: “A few days ago Nicole got very sick. She was brought into the hospital and they did everything they could to help her. I have been sitting here with her in the room 24/7 since she got here making sure she was being given the best possible care. Today we learned that there is nothing else that can be done.”

Dave Meltzer of the Wrestling Observer has reported that Bass suffered a major stroke earlier in the week. 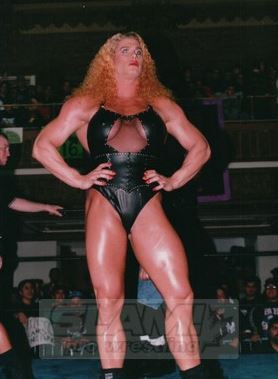 Nicole Bass during her brief time in ECW. Photo by George Tahinos

In the late 1980s and into the 1990s, she competed as a bodybuilder, the highlight being a win in the 1997 NPC National Bodybuilding Championship.

With professional wrestling booming, and Chyna a rising star in WWE, she arrived in the off-beat Extreme Championship Wrestling promotion in early 1998, and aligned herself with Justin Credible.

Her training in pro wrestling, abbreviated though it may have been, came under Dory Funk Jr., and others in the class included Rico Costantino, Russ McCullogh, Mark Henry, Joey Abs, and Latin Dragon.

She jumped to WWE, debuting at WrestleMania XV, helping out Women’s champion Sable; from there, she served as a bodyguard for Sable, beating up many of the other women in the division. Next up, she acted as a second to Val Venis.

Bass left WWE abruptly and her absence was never explained. Years later, she filed a sexual harassment lawsuit against backstage WWE employee Steve Lombardi (who wrestled as The Brooklyn Brawler, among other names), that went into the courts in 2003, but was dismissed.

It was not her only brush with the law. In 2005, Bass was involved in a domestic violence case with her husband, Robert Fuchs, who died in 2013; the couple married in 1985. Bass lovingly served as a nurse/caretaker for Fuchs in his final years, as she was many years her senior.

In September 2000, she spent a night in prison after biting a New York police officer who was trying to break up a fight that Bass was involved in. And in June 2015, she was arrested for shoplifting in a Queens, NY, supermarket.

While her bodybuilding and pro wrestling appearances brought her into the spotlight, it was Howard Stern’s fascination and friendship with her that kept Bass there. He challenged her femininity and she took a test to prove to him that she was indeed a female.

Bass and her life were so odd that she became a Stern regular, a part of his Stern Wack Pack. Fred Norris would imitate Herman Munster when doing impressions of her when she called or appeared in studio. Her segments usually exposed her chaotic private life.

Some members of the wrestling community posted their thoughts on Bass as news of her passing on February 16th spread. “Her heart was as big as she was. A wonderful & loyal friend,” wrote Tommy Dreamer on Twitter.

“She was a strange and I think very troubled woman, but she was always very kind and she had a good heart,” wrote Lance Storm. “I had not seen or spoken with her since we worked together in ECW (likely 18+ years) which is why I’m surprised at how sad this news makes me.”