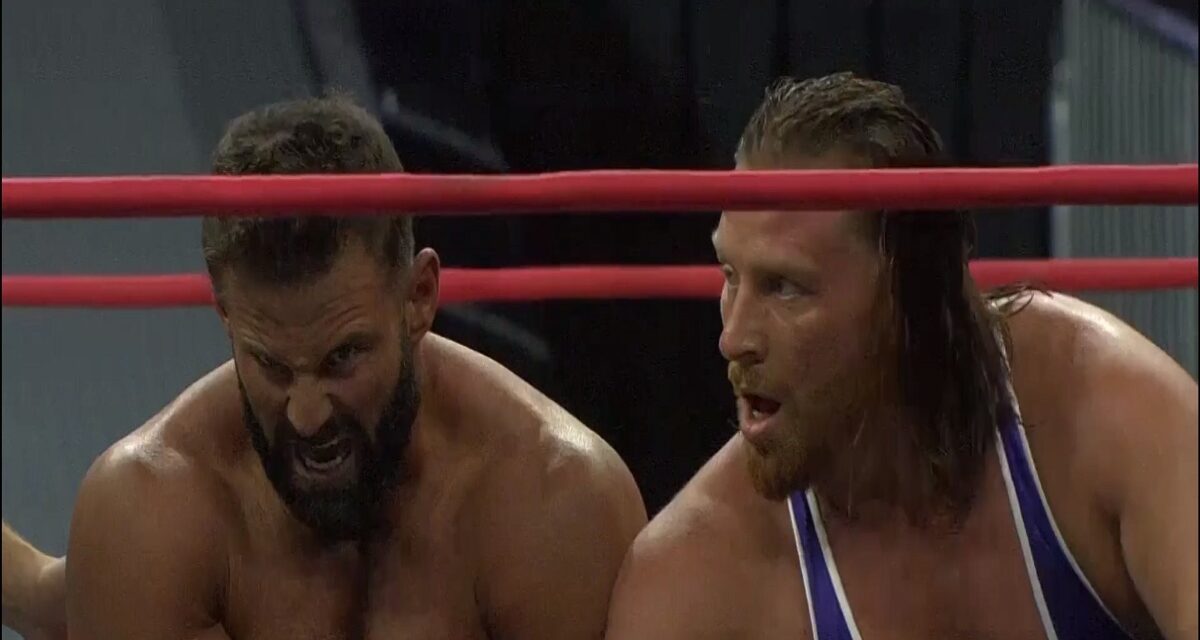 Greetings and Salutations! I am back with the IMPACT TV report this week. We are coming off an epic Josh Alexander and Mike Bailey match. This week we have a tag team title match as the Motor City Machine Guns are hoping to capture the belts from Heath and Rhino. Bully Ray’s true colors seem to be showing but is his best friend Tommy Dreamer still has faith in his friend. Without further ado, let’s get to it!

We get right into the action…

Edwards and Delirious showed they knew each other well as they exchanged hold for a lot of the start of the match. Edwards hit a few hard chops but Delirious fired up and hit a suplex. Delirious then went on the offense and hit a flying clothesline and tried to lock a cobra clutch, but Edwards rolled him out and connected with a big boot. Edwards hit a superkick on Delierious then tried to hit a tiger driver, but Delirious turned this into an armbar and then rolled over Edwards’ body to get a cobra stretch. While being stretched, Edwards rolls out and went for a pin on Delerious and got the win!

Edwards went to shake Delirious’ hand, but then he turned on him and hit the Die Hard Driver before continuing to beat on Delirious. Yuya Uemura ran down to make the save, but Edwards took him out also. Edwards turns his attention back to Delirious as he tried to take off his mask until Jonathan Gresham came out for the save!

Scott D’Amore didn’t like Josh’s plan last week, but it turned out better than he thought.  Josh says Mike Bailey is the real deal. If you thought last week was unwise, he won’t like it this week when he calls out Bully Ray. D’Amore says not to lose focus since he has Bully Ray in a few weeks.

Tommy Dreamer came into the locker room and apologized to Alexander for what happened with Bully Ray. Alexander refused, but D’Amore did insist that Dreamer was honest, but Alexander thought Dreamer was in on it.

After an extensive stare-down, the two locked up before Ray hit three body slams and a spike piledriver on Skyler for the quick & decisive pinfall win.

After the match, Tommy Dreamer came down to confront Bully Ray. Dreamer said that he was the only one to trust Bully Ray over the last several months but he has made him look like a fool. Dreamer said their friendship was over. Ray grabbed a mic and started to taunt Tommy Dreamer. Ray said that Dreamer was a coward and even went onto admit that he in fact was the one who took out Ace Austin a few weeks ago and that he used Dreamer to go to bat for him so people wouldn’t suspect him.

Dreamer was getting upset and angry and was now in full blown man tears. He said that he’s going to be the innovator of violence again right now, and that while he didn’t want to fight, he was going to. Ray mockingly left the ring as Dreamer fired up and smiled knowing that he played Dreamer like a fiddle.

The Major Players were backstage complaining to Crazzy Steve about how they were banned from ringside in the tag team title match later. Steve let them know them that they had something much bigger to worry about, and both Myers and Cardona looked down and said, “The bull is behind us, isn’t he?” Taurus then scared both of them off.

Before the match and even before The Decay could get to the ring, Trey Miguel knocked Maclin down with a spray paint can and as the kids say, tagged Maclin. Steve pleaded with the ref that he could still wrestle, but Taurus came into the ring first to give Steve time to rest.

Taurus hits a combo of moves on Myers and Cardona before tagging to Maclin again who was ready to take out his frustration with Miguel on the Major Payers. Maclin was biting them and attacking with all his might. Cardona, hit Maclin in the back of the head, causing him to stumble, and then the Major Players hit a combo Samoan drop and neckbreaker for the win.

Mickie James and Jordynne Grace signed their contract for the Impact World Women’s Championship at Impact Hard to Kill. James said that Grace was presumptuous to think she could beat Mickie. James went to sign the contract and Tasha Steelz came in to say that James never even beat her yet so she wants a shot at her. Mickie said she would take the challenge before the match with Grace, but Grace said that she needed Mickie to 100%. Scott D’Amore intervened and booked a match for next week as Jordynne Grace & Mickie James will face off against Savanah Evans & Tasha Steelz.

Some days I really feel like I should just stay in bed…#IMPACTonAXSTV https://t.co/7niIqau0nX

In the back, Gia Miller is interviewing Mike Bailey. Miller asked Bailey about Kenny King spitting water into his face after his match with Alexander last week. Bailey said that if King wanted to play games, he wasn’t going to play along, but if he wanted to fight, they could.

Angels attacked Callihan to start the match but Callihan came righ back with a suplex into the corner. Callihan went for the Cactus driver ’97, but Angels fought out. Callihan rolled to the floor and chopped Angels before getting face to face with Deaner. Callihan went for the Cactus driver yet again but this time on the apron of the ring but started his “Thumbs up, thumbs down” stick which caused him to lose control of the match. Kon distracted Callihan which let Angels drop Callihan to the floor.

Angels hit a PK in the ring but missed a top rope dive. Angels then slammed Callihan and went for the LaBell lock. Callihan fought out biting the hand of Angels and hit a brainbuster. Angels kicked out and Callihan and Angels exchanged chops in the ring until Angels hit a frog splash on Callihan for a 2-count. Angels went for yet another frog splash but Callihan moved when they were up, hit a package piledriver for pinfall.

Kon attacked Callihan and then Deaner called him off and was a creep over  Callihan. Deaner then ordered Kon to hold Callihan up and Angels hit a spin kick on him. Deaner then sat on the back of Callihan to lay him out to end the segment.

Gisele Shaw would like to reunite with Deonna Purrazzo. Purrazzo tells Shaw that she broke up the band for good. Deonna says she should apologize for ruining her best friend’s career. Shaw then said she would like a fresh start, but Purrazzo says they already failed. Shaw then mentions that Purrazzo is owned a tag title rematch, but with Chelsea Green gone, they should in fact team up. A very reluctant Purrazzo agrees, and they start talking strategy.

Taylor Wilde was playing with tarot cards as she is now the wild witch.

Hendry grabbed the mic and said that he was greatly disturbed by Swinger’s Dungeon and that Hendry’s Dungeon was a place full of people believing in him. The match started as Hendry hit a stalling vertical suplex and kicked up. Gujjar tagged in but as this was happening, Moose ran in and attacked Hendry, but Hendry dodged the attack to fend of Moose. Hendry grabbed a mic and called Moose unprofessional before Moose came right back and chased Hendry backstage. Oh, the match was still officially on so Gujjar hit the gargoyle spear on Swinger for the pin and the win!

Jason Hotch and John Skylar were backstage and they are np longer wanting to be disrespected. They have a common goal so they agree to form a team.

Steve Maclin was backstage and cut a promo about how Rich Swann is in his way  while he tries to capture the Impact World Championship. He then said he was going to crush Rich Swann next week.

Rhino and Alex Shelley started the match and Rhino was using all of his strength to take the early lead. He threw Shelley across the ring. Shelley was being outright assaulted by Rhino who eventually tagged out to Heath. Shelley is now able to get some offense in the match as he drove Heath to the corner and made the tag to Sabin.  Sabin hit a bulldog on Heath and now Shelley and Sabin double teamed their opponent as they hit a combo surfboard stretch and cutter. Shelley went for sliced bread on Heath, but he countered and hit Shelley with a powerslam.

After sometime, Rhino tagged in and worked Shelley’s back. Heath continues this attack as he put Shelley in a tree of woe and kept hitting him but Heath went to adjust his kneepad and Sabin rushed over to the corer and and freed Shelley. Shelley now hit a flatliner into the corner. Al this was wasted as Rhino hit a bearhug on Shelley but Shelley fought out and tagged Sabin back in the match.

Sabin hit a DDT on Heath and then Sabin launched Shelley into a tornado DDT on Heath for a two-count. MCMG continued with their double team as they hit a double superkick on Rhino before hitting a double team kick in the corner on Heath. Rhino hit Sabin with a gore as he turned around, but Sabin kicked out on a very close two-pin. With Sabin back up, Rhino went for another gore, but Sabin jumped over with a sunset flip and got a pin…1….2….3! WE HAVE NEW CHAMPIONS!!!!!

Overall this was not the strongest episode of Impact. The in-ring was mediocre at best and had many short matches with too many backstage segments but they did at the least forward some stories. Overall, the main event was fun and MCMG are your new champs! Bully Ray is….well, I’m not sure. Josh Alexander’s attitude is very interesting as I think they are planting seeds for something. All in all, a very mid episode of IMPACT TV.