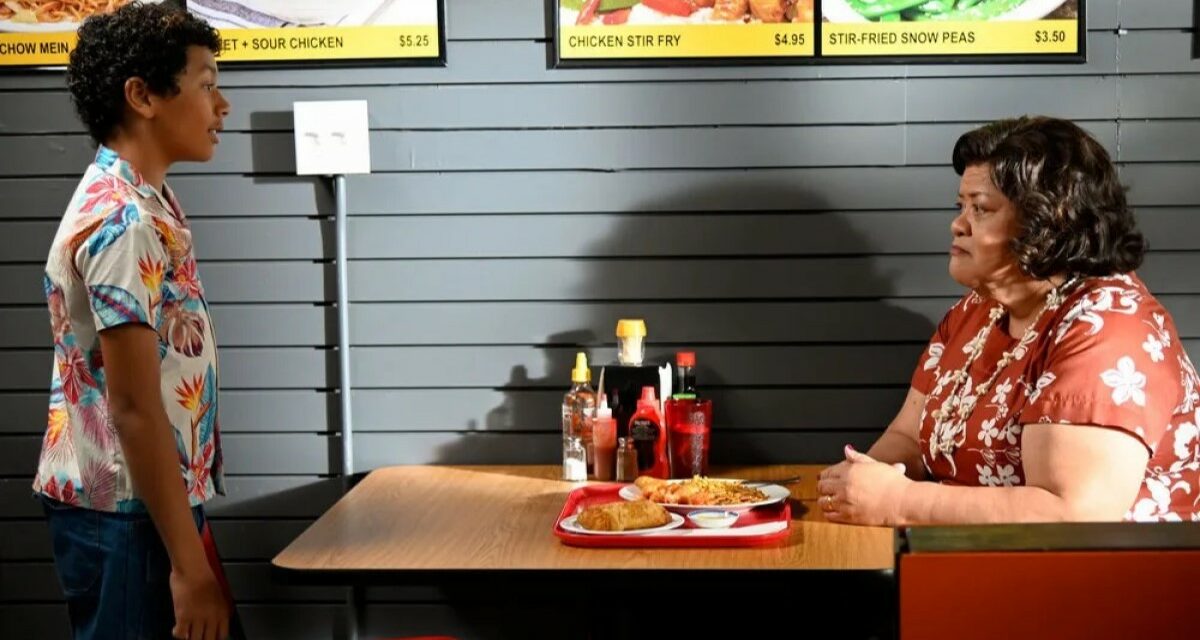 This week, we’re going back to the 80s with the youngest Young Rock (played by Adrian Groulx — who is quite honestly looking more and more like a young Dwayne Johnson as he grows) watching his father Rocky Johnson (Joseph Lee Anderson) lose his job and dye his hair, all while Dewey seeks the stamp of being cool by getting his hands on a Nintendo Entertainment System.

Opening in 2032, former presidential candidate Johnson explains why he turned down an offer from President Taft last week — one that would have seen Dwayne help out the country in a state of coffee shortage — because he simply doesn’t want to work with his former political rival. Ever-present companion Randall Park asks Johnson if he’s never had to suck it up and work with someone he didn’t get along with before, which naturally reminds Dwayne of a story or two from his youth.

So, back to 1985 we go, as Rocky is still dealing with the fall-out from his decision to double-book himself in Saudi Arabia (which raised the ire of Vince McMahon), and Ata Johnson (Stacey Leilua) is having her own problems getting along with head booker Lars Anderson in Polynesian Pro Wrestling.

The first big domino to fall for Rocky after Saudi Arabia is The Soul Patrol losing the WWF tag team titles to Adrian Adonis and Dick Murdoch (not identified by name in the show); a loss that Tony Atlas puts squarely on Rocky’s bad business decision. Ata’s tough spot is that while she, and supposedly many in the locker room, are having a hard time getting along with Anderson, Lia likes him and trusts him.

The writing is on the wall for Rocky when he receives what he presumes to be a bonus cheque, only being told later by Pat Patterson that it was, in fact, his severance cheque. Naturally, he’s already spent some of the money on frivolities before he learned this, and is forced to pawn off his new, rhinestone-encrusted, “Black Elvis” sunglasses to try and keep his unemployment a secret from Ata until he can set up another job.

Meanwhile, at Dewey’s school, he finds that he can’t impress people as much as he’d like by talking about his former champion of a father, and all everybody’s talking about is Nintendo (which he doesn’t know anything about). After 2032 Johnson and Park reminisce about the ending of Metroid on the NES, Dewey rather presumptuously asks for a Nintendo, a request that his secretly-unemployed father rebuffs and tells him to get a job.

Dewey heads to the Golden Wok looking for work, but Lia is there and invites him to work for her instead.  At the Johnson home, Ata returns to see their living room table is gone — also pawned off by Rocky — and that, more shockingly, his hair is dyed blonde in a sort of tribute to Sweet Daddy Siki. Maybe a little Butch Reed, too? Rocky has to own up to being fired, but his fears that Ata will be mad at him are set at ease and they make a plan to get him back into the Hawai’ian wrestling scene.

They make the pitch to Lia, who’s all for it to help the family, but Lars is in on the meeting and warns Lia that Rocky might be just about finished as a draw. Later on in the show, Ata and Rocky pit themselves against Lars, but Lia sticks with her booker. Ata says she and Rocky are leaving to start their own promotion, to which Lia simply puts on a smile and wishes them luck.

Finally, Dewey makes his money, but instead of buying a Nintendo he gets his dad’s glasses back for him. Dang, that was sweet.

Speaking of “Finally”: the eyebrow has come back to 2032! Dwayne Johnson raises a decent one when prompted by Park to put aside his differences with Taft and help America. And if he does, Park promises to buy him a Nintendo. Here’s hoping next week features a Kings of the Beach showdown.

As always, stay tuned to SlamWrestling.net for coverage of all things Young Rock!