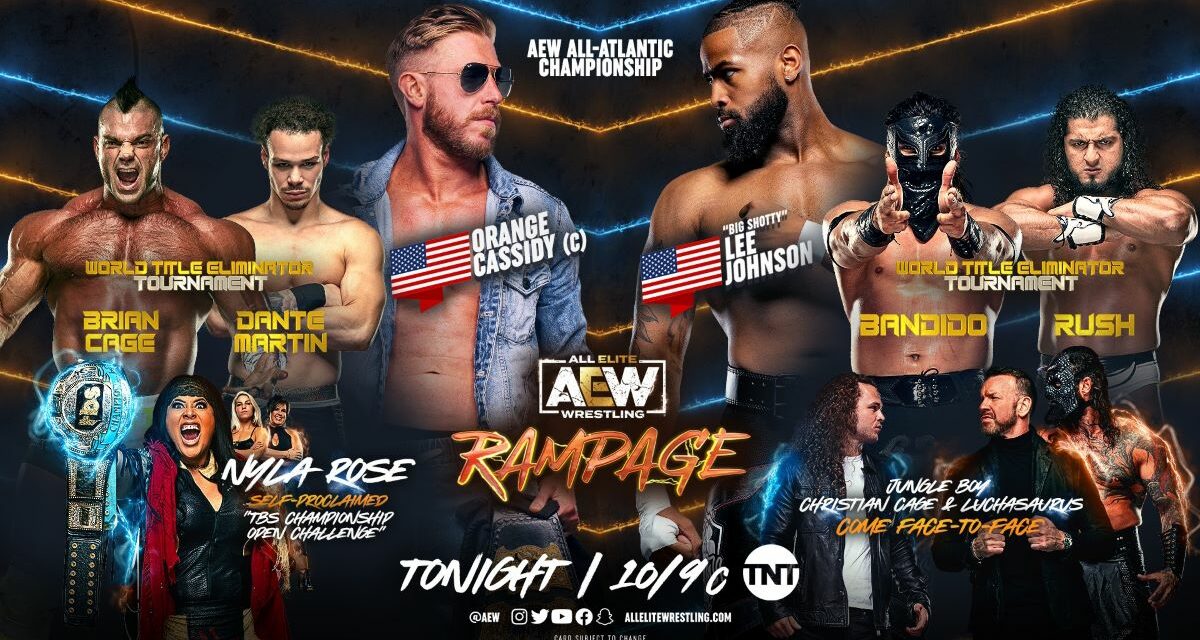 It’s Friday night, and you know what that means?

No, not to create parody Twitter accounts or pay for verification (ever). It’s AEW Rampage, and we got contests coming up for the AEW World Championship Eliminator tournament, and Orange Cassidy will defend his All-Atlantic belt against…Lee Johnson?!

Maybe it’s because of the work hours between my regular job and Slamwrestling.net, or maybe I just don’t have the energy to recap a glorified AEW DARK: Elevation show, or maybe the Guinness just hit differently tonight. Either way, this show just does not blow up my skirt. In hindsight, I shoulda passed on this recap, but I’m here now. Therefore, I will do an all-Haiku in Review™ recap of the matches.  For everything else, I’ll just enter like normal.

(Note to Self:  If this happens again, consider doing an epic poem. )

From the Agganis Arena in Boston, MA. Excalibur, Tony Schiavone, and Jim Ross have the call, and first up are Christian Cage and Luchasaurus. 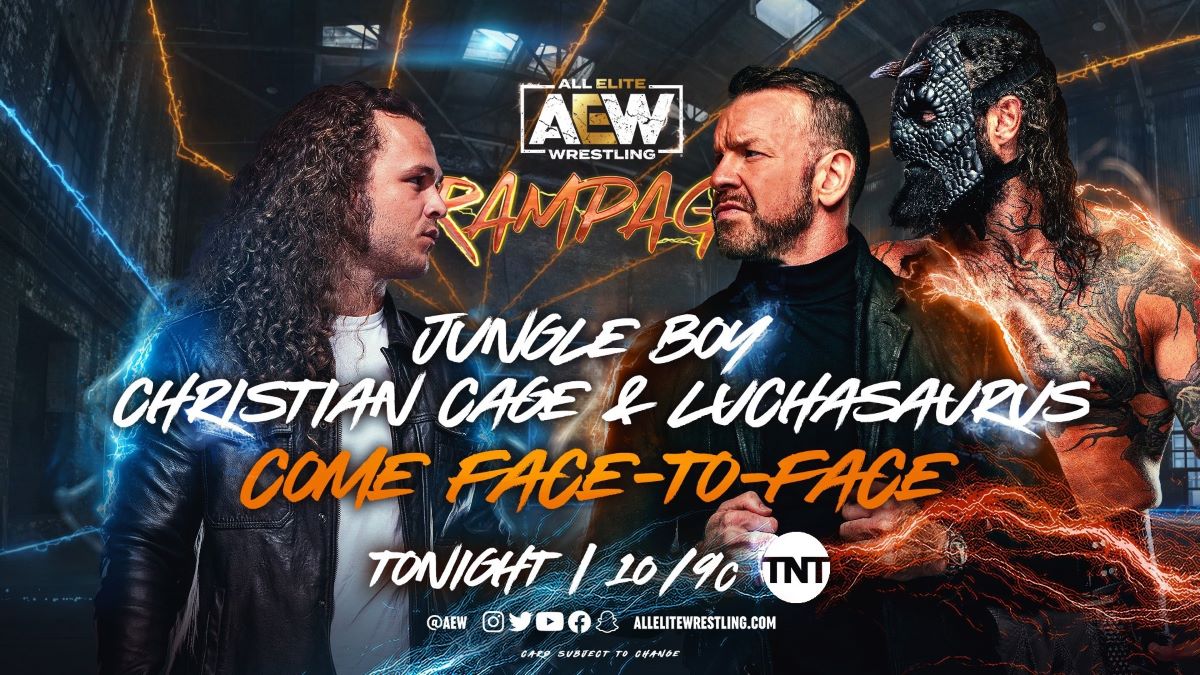 They call out “Jungle Boy” Jack Perry, and they respond to his request for a steel cage match at Full Gear, and Cage answers in the affirmative.  But before leaving, insults are thrown, and Perry attacks, but Luchasaurus is able to overpower and slams him back first on a steel chair.

Ok but the way the chair bent 🥴 #AEWRampage pic.twitter.com/DGe7ZWbzip

Lexy Nair is backstage with Death Triangle. PAC says their team needs to start thinking about winning by any means necessary.  It’s why Rey Fenix did not get the All-Atlantic championship, and why Penta is not an AEW Heavyweight champion.  PACX taps the timekeeper bell hammer on the Trios belts they’re carrying and says they need to do everything to stay on top.  The Lucha Bros, aren’t feeling it, and walk off in the opposite direction of PAC.

Do we sense some controversy among the Trios Champions? #AEWRampage pic.twitter.com/EWnBD3jJup

But let’s head to the First Match of the Night: 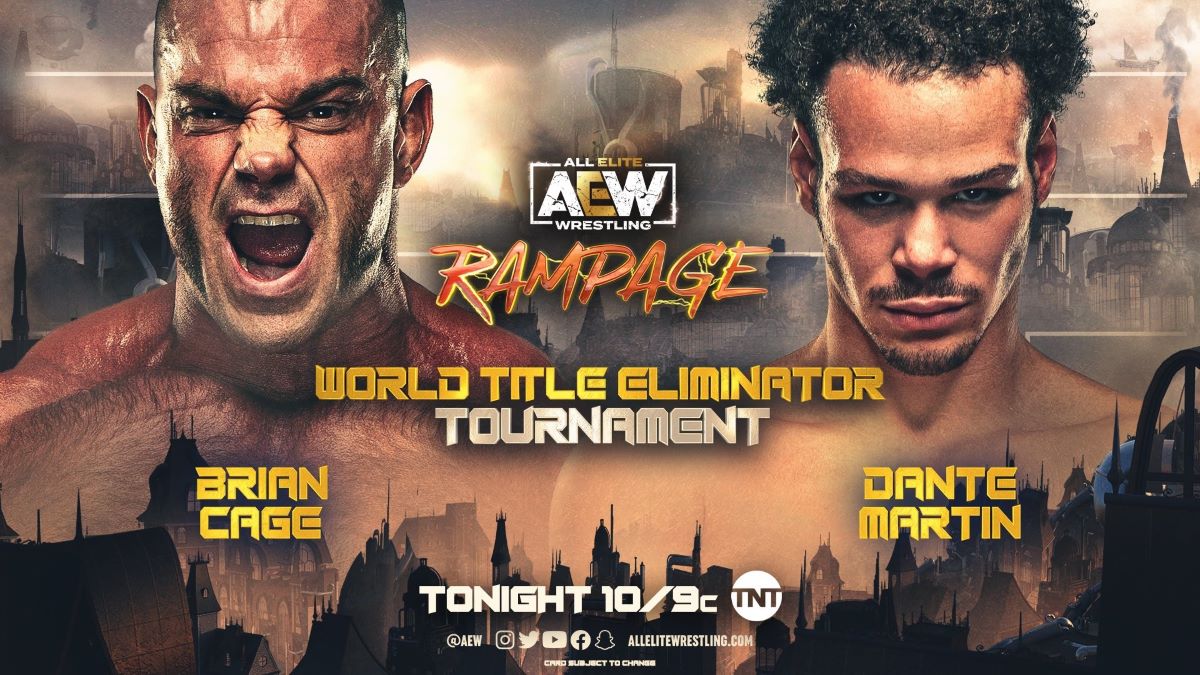 So here’s the first Haiku in Review™:

Who Bettah than Brian Cage?

Not Dante Martin. One Weapon X

Your Winner, and Advancing in the Tournament:  Brian Cage

Lee Moriarty and Stokely Hathaway are talking with Lexy Nair backstage, and Taiga Style wants to challenge anyone for a title opportunity. Hook wanders in the shot, looks at them, and walks away.

Now this match is something we'd love to see 👀 #AEWRampage pic.twitter.com/TJnhyQEyhJ

Oh, and we get another video promo of the fate of the House of Black.  What could it all mean (other than whatever conditional release was done away with)?

Let’s head to the next match of the night, and it’s another… 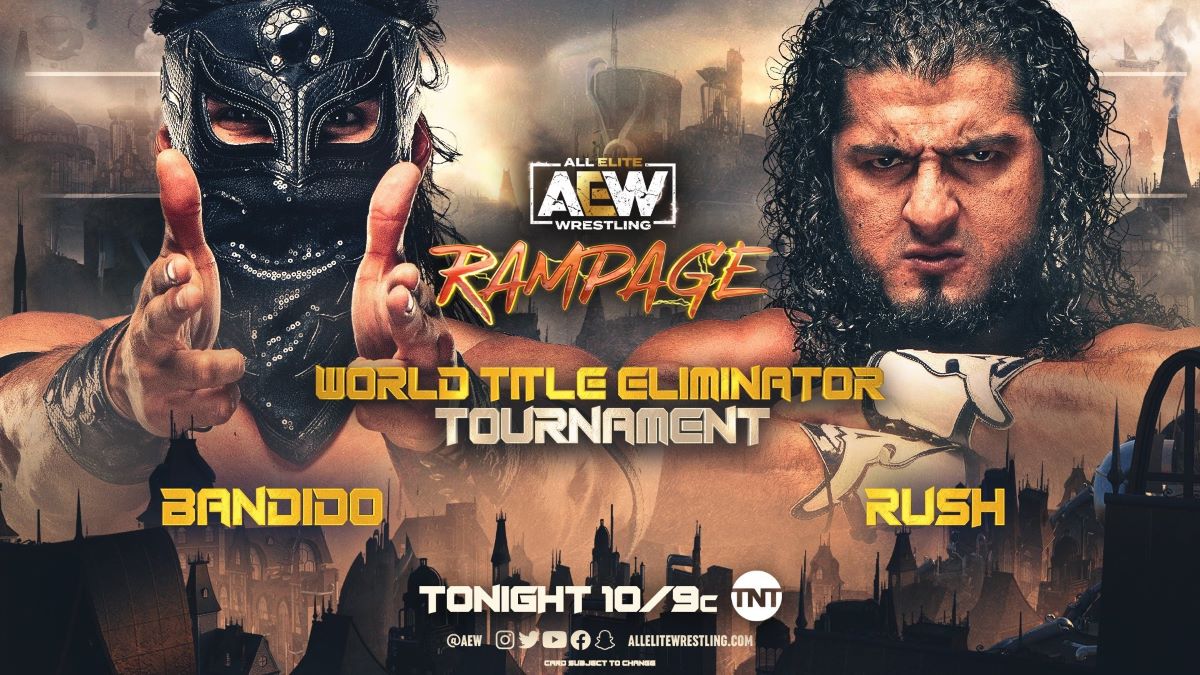 I normally like lucha matches like this, but something about this feels kinda “meh” to me, so here’s your second haiku in Review™:

Your Winner, and Advancing in the Tournament:  Bandido

Jake Hager interrupted Claudio Castagloni’s interview with Renee Young earlier in the show, and Hager mentions they were a great tag team, and he’s a much better “Sports Entertainer” than a wrestler.  Hager tries to lure him to the Entertainment Side of the Sports, and The Swiss Superman just shakes his head in disbelief.  I guess we can expect a feud with those two in the near future.

Now for something different (I guess?), here’s…

And extinguishes any Sparks

Your Winner via Pinfall:  Nyla Rose

After the match, Jade Cargill arrives with her Baddies in tow and she starts to decimate Rose.  The native Beast made a hasty retreat and still absconded with the TBS belt.  Cargill is ready to tear her limb from limb but gets held back by security.

Mark Henry is in back with Lee Johnson, who’s backed by The Factory.  Cassidy is hanging with his Best Friends and Danhausen.  Johnson states he’s the “Hot Shotty” who starts the party. Danhausen is ready to rip his teeth out, but Cassidy is all “whatever” and grabs a mic inside his denim jack and says, “Well, that’s been enough talk,” but Henry isn’t having him steal his catchphrase.

We were not expecting the microphone 😂 #AEWRampage pic.twitter.com/miazMhHoQt

Because it’s time for The Main Event for the…

Are you feeling the excitement here?

Yeah, that’s what I thought, so here’s your final Haiku in Review™:

Johnson is just no

The Factory tried to interfere during the match and afterward, but The Best Friends stopped that, and Cole Carter not only gets a group hug because you Got to Give The People What They Want (which wasn’t, apparently, a higher caliber main event).  Then they Triple powerbomb Carter in the center of the ring and poses all around as the show fades to black.

First of all, whoever books matches for AEW DARK:  If this was your doing, stay in your lane.  This added nothing to the product, and it’s no wonder WWE Smackdown kills them in the ratings.

Was that harsh?  Perhaps.  Are there stats to back it up?  Definitely.

I understand one match where someone has to do the job on the card, but all of them?!  That’s what gives this show a “0” from me.  If you’re wondering why I gave it a “1”, that was for my Haikus (I’m my own worst critic).  Oh, and no I don’t need a Snickers.  I need some wrestling to care about instead of doing Haikus all recap long.

Anyway, see you in seven!