Rocky Maivia develops an attitude on this week’s ‘Young Rock’ 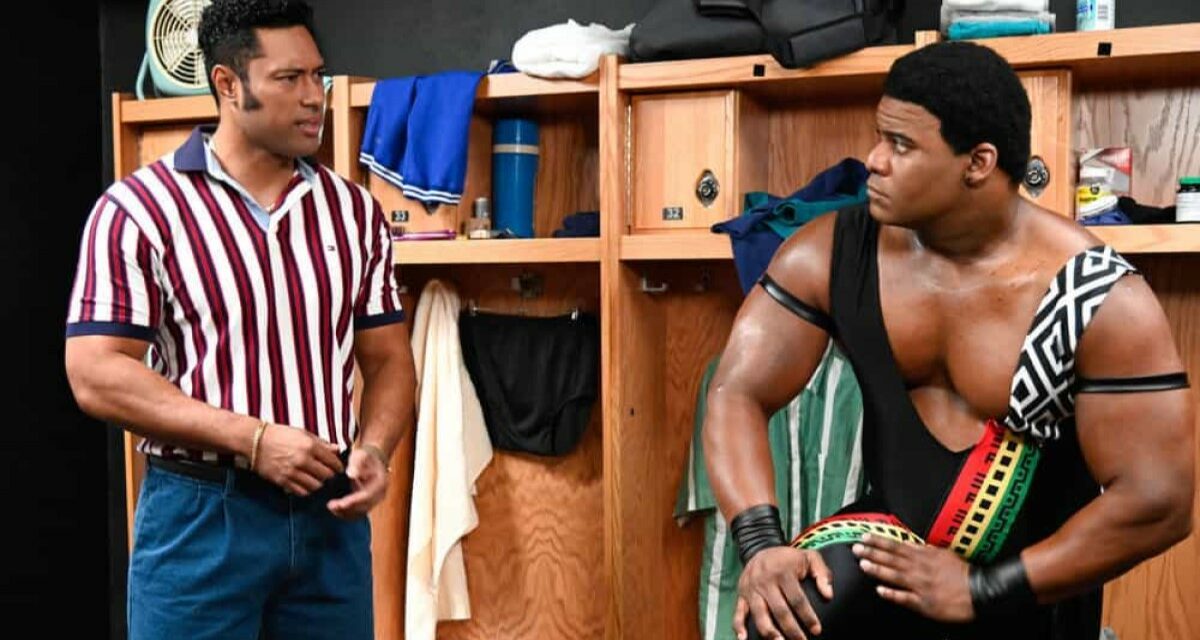 It’s safe to say that this is an episode the wrestling fans who watch Young Rock have been waiting for. Most readers know this story: young Rocky Maivia seemed like a sure thing; he had the lineage, he had the athleticism, and he had the charm. For whatever reason, the fans turned on him and thus began “Rocky Sucks”. That was the chant that followed him around as he tried to push through the jeers and it became the focal point of his heel turn.

But hold on, I’ve gotten ahead of myself.

Tonight’s episode begins, as always, in 2032. President Taft is delivering the news to Dwayne Johnson that the United States is facing a national emergency. It’s, um, a coffee shortage. Played for laughs, the president wants Johnson to broker a coffee bean deal with the Prime Minister of a fictitious nation as she’s a big fan of The Rock. Taft is feeling the pressure of the presidency, feeling like he can’t please the people no matter how hard he tries.

Hey, you know who knows something about that? Dwayne Johnson, who tells the president that, well, sometimes you just can’t please the people now matter how hard you try. This, naturally, leads to Johnson looking back on his younger days — specifically to 1997 when he, as played by Uli Latukefu in this timeline, was simply unable to get over with the fans.

First, we see Latukefu as Maivia slugging it out in 1997 WWF. Except it doesn’t look like 1997 WWF. The “darkened arena” vibe, which has suited the TV show’s wrestling scenes in Hawai’i and Memphis just fine, now looks out of place as they re-create the WWF in the late 90s. With Latukefu showing up on Monday Night Raw not that long ago, maybe they could have worked something out even earlier to film some of the wrestling scenes with a big crowd for the background?

Dwayne hurts his knee in a match with Mankind and convalesces at home with the family. He receives word that there will be no surgery, but his dad Rocky says the writing might be on the wall to lose his spot with Vince. Either way, Dwayne is not looking forward to going back to the chants — you know, those chants.

While Dwayne sweats it out professionally, things are looking rosy for him personally as he and Dany (Arlyn Broche) are married. A wedding reception seems like a good time to utilize some of the show’s cast of wrestling characters, and so we hear from The Wild Samoans (John Tui and Fasitua Amosa), Bruno Lauer (Ryan Pinkston), and Hollywood Hulk Hogan (Brock O’Hurn) with the black beard and all, giving Dwayne advice about showing the fans who he really is. “Macho Man” Randy Savage (Kevin Makely) is there too, and he continues his running gag from last season by revealing more surprising interests — this time he waxes about investment portfolio risk management.

With Dwayne and Dany just about to head away for their honeymoon, Johnson receives the call from Vince McMahon (Adam Ray) he’s been waiting for. McMahon heard that Dwayne is ready and wants him back as a heel in a week.

So, wearing his striped polo shirt and jean shorts, Maivia helps out Faarooq (Marcus Lewis), introduces the Rock Bottom, and turns his back on the fans. He still doesn’t feel like he got a pop for his actions, and neither Faarooq nor Pat Patterson do much to build his confidence backstage. Ron Simmons tells him bluntly: “You’re the fourth man in a four man crew,” while Patterson says they won’t know how it went over until the next time Rocky is in front of the fans.

Desperate to make his mark and make it count, Dwayne gets two minutes from Vince for a promo the following week and, with his family watching anxiously from home, he pulls it off. It’s an almost verbatim recreation of Maivia’s promo which sought to justify his turn and his joining of the Nation of Domination. Backstage again and looking for some confirmation, Patterson says it was “interesting” and Vince says … nothing.  Still, Dwayne knows that it felt right to him, and more in line with what the WWF was offering at the time (exemplified in this episode by Luke Hawx doing his thing as “Stone Cold” Steve Austin beating on Vince McMahon).

Back to 2032, Johnson brings it all together and reminds President Taft that he needs to control his own narrative. Inspired, Taft asks Dwayne to step up for his country, but Johnson turns him down. Without the drive to the presidential election that fuelled the 2032 storyline in the first two seasons, that part of the show is meandering a bit and hopefully it picks a clearer direction next week.

While Young Rock has always played fast and loose with specific details of the who, what, and where in re-telling Dwayne Johnson’s life, this week it went for a more spot-on recreation of Maivia’s in-ring moments. Maybe it’s because the events they’re re-telling from 1997 are so easily cued up on WWE’s YouTube channel, allowing you, if you wish, to play the show and the real-life events side-by-side.

With that in mind, expect most of Dwayne Johnson’s greatest hits from The Attitude Era and beyond to fill the screen this season. Well, at least the PG stuff — maybe PG-13 at the most. As always, stay tuned to SlamWrestling.net for stories, reviews, and interviews!