Shibata and Cassidy steal the show on this AEW Rampage 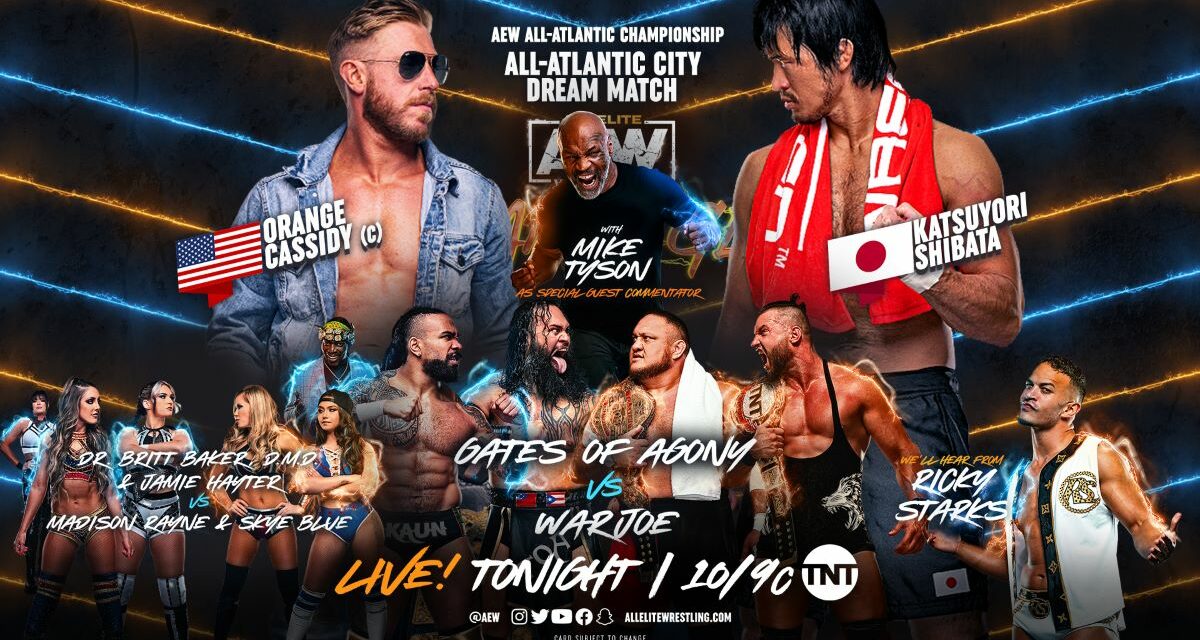 It’s Friday night, and you know what that means? No, not to consider garbage people like Logan Paul a Crown Jewel (don’t ever joke about stuff like that). It’s AEW Rampage, and we have two great matches with Orange Cassidy defending the AEW All-Atlantic Championship against Katsuyori Shibata of New Japan Pro Wrestling fame. Plus, recently signed is a tag team match between WarJoe and The Gates of Agony in the next level of their feud with The Embassy.

We also have Mike Tyson return to the Jim Whelan Boardwalk Hall in Atlantic City, NJ for special guest commentary alongside Excalibur, Tony Schiavone, and Jim Ross, and it’s time to head to ringside for the First Match of the Night… 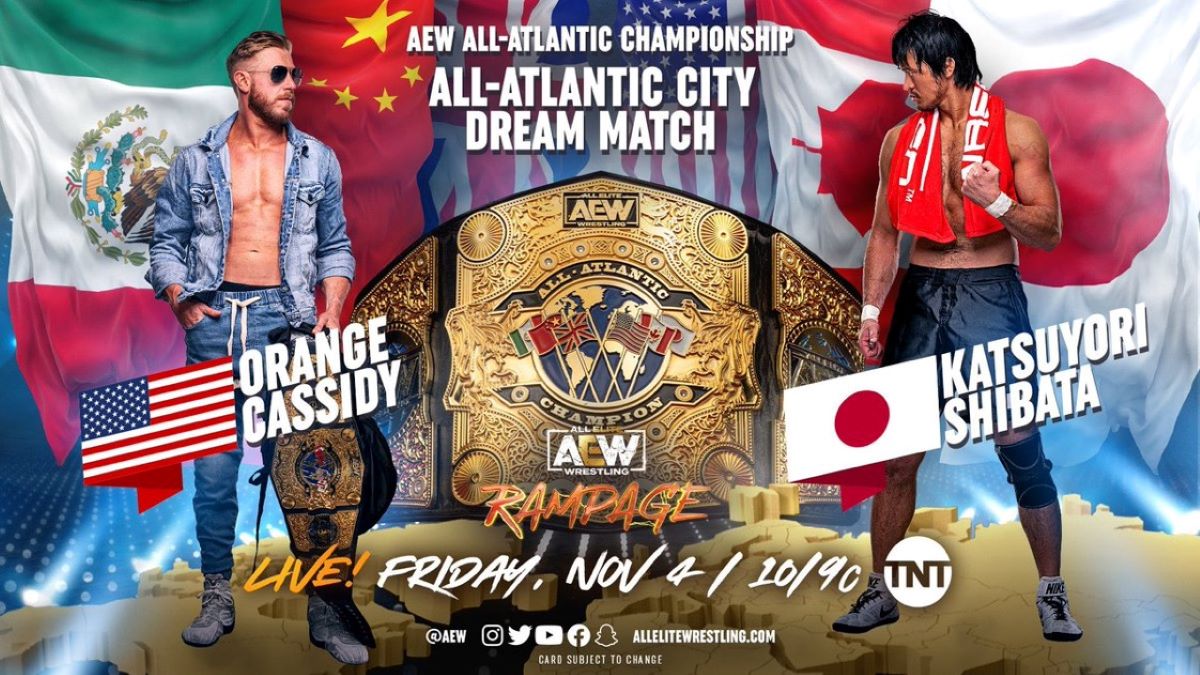 Tyson’s a little hard to hear at commentary so his gravelly voice adds very little to commentary other than to create a pop for the fans at ringside.  However, the big buzz that Excalibur and company keep hammering home is on Shibata and his recovery from a subdural hematoma, which was so severe it was feared he would never wrestle again.  He had been in a handful of matches, the first being when he did an exhibition match and now this will be the true test of his skills.

It’s Strong Style versus Sloth Style, and Shibata wastes no time taking down Cassidy, who has his hands in his pockets (naturally).  Shibata is outside the ring, and Cassidy launches for a tope suicida (still with hands in his pockets) and then throws him into the barricades.  Shibata returns in kind by throwing the All-Atlantic champ to all corners of the barricades at ringside.  They go at it with striking blows from their forearms, and then quickly reenter the ring before the ref counts them out.  During Picture in Picture, each man tries to goad the other, but neither plays into their trap.  Cassidy steps up to him with his hands in his pockets for a kick, and Shibata cinches in a leg vine with a heel hook.  Cassidy manages to escape the hold and gets Shibata with a leaping DDT from the top turnbuckle, then a diving dropkick in the corner, followed by his “kicks of doom” but he gets blocked.

An STO by Shibata sends Cassidy crashing to the mat, and then he levels him with his own “kicks of doom.”  Cassidy is…dare I say…angry(?), but then he sits crossed-legged in the middle of the mat taunting Shibata (and not that other wrestler that does the same thing.  You know…ol’ what’s-his-name.  I forget who it was, but he was some kinda punk or something).  In any case, Shibata sits down at his eye level and they exchange “chops.”  Shibata ends this farce with a stiff chop to his chest and then sends Cassidy to the corner and nails his signature dropkick.  Both men then take turns with dueling backdrop suplexes and then a chop lays both men out.  Cassidy gets up first and his punt kick is good, but Shibata stands still.  He dares Cassidy to kick him again, and he unleashes a flurry of kicks until Shibata strikes him with a leaping punch, and then he goes to an Octopus Stretch but Cassidy manages to get in position to place a foot on the bottom rope to break the hold.  He goes to a suplex but it’s reversed to a Stun Dog Millionaire, and he goes for Kawada-style kicks to his head, but now Shibata reverses to a DVD.  Cassidy comes back with the signature Beach Break to cover for a two count, and the elbow pad comes off and delivers the Orange Punch and Shibata shrugs it off like it was a tickle.  He gets Cassidy in a sleeper and then transitions into a backdrop suplex. Shibata sends him to the ropes and the second Orange Punch by Cassidy finds the mark and he covers for the pin and the win.

Your Winner via Pinfall, and Still All-Atlantic Champion:  Orange Cassidy

After the match, Shibata extends his hand and they shake in a mutual show of respect after the match, with Cassidy placing his shades on him for a pose down.  Fighting Spirit?  Eh, whatever.  But it was a damn good match!

Lexy Nair is backstage with Toni Storm about facing Jaime Hayter at Full Gear for the AEW Interim Women’s Championship. Storm lays it out that she doesn’t know what happened to their friendship, other than to place the blame on listening to sycophants like Baker and Rebel.  She says that Hayter needs to take responsibility for her actions like Storm will when she injures her at the PPV.

#AEW Interim Women’s World Champion Toni Storm is sending a message to @jmehytr ahead of their match at #FullGear.
It’s #AEWRampage LIVE on TNT! pic.twitter.com/MKVjLEkFSK

Now the Blackpool Combat Club is with Nair as they go into their issues with Chris Jericho. Claudio Castagnoli draws the line at hurting non-wrestlers like Bobby Cruise and Ian Ricabonni. Castagnoli wants a rematch for the ROH World title since Jericho is keen on facing former Ring of Honor champions.  Bryan Danielson is more direct in stating he will stomp his face in when he gets the chance, and he, too, wants a rematch with Jericho for the belt he once held with honor. William Regal puts the exclamation point on the segment by saying, “Balls in your court, sunshine!”

Now for the next match between… 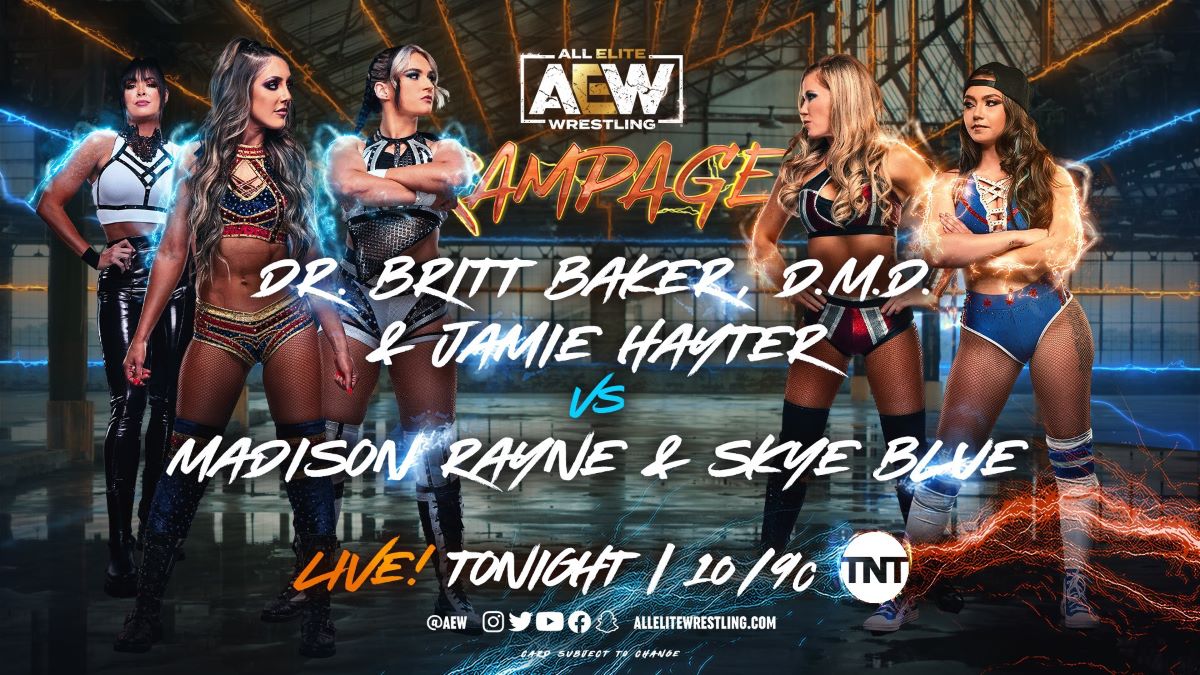 I espoused a theory last week at this time that Rampage is becoming more of a Donut Show (lots of tasty stuff to go around, but a big hole in the middle), and this is no different.  But I feel that it is time for a Haiku In Review™:

As they job in a loss by

As if on cue, Storm comes down with purpose, lays out Rebel, and then slugs it out with Hayter in the ring until Baker gets her from behind and they mock the champ.

Oh, and as for the Neil Diamond earworm in the Haiku:  You’re welcome.

There is a recap of Jericho calling out Lamar Jackson, and apparently, the Baltimore Raven wasn’t expecting it.

Lamar Jackson reacts to being called out by Chris Jericho in the ring last night. 🤣

Tony Schiavone is backstage with Sammy Guevara and Chris Jericho and he pleads with The Ocho to stop assaulting commentators. He agrees, but notes backstage interviewers are fair game, and Schiavone takes the hint. Jericho agrees to take both Danielson and Castagnoli and goes so far as to suggest a four-way match with them and Guevara.  He’s happy about it, right until Jericho mentions, “you’ll do the right thing, huh, buddy?”  As Jericho walks off camera, The Spanish God is perplexed with a look that is, as the kids would say, “WTF?”

Not the answer we expected from @IAmJericho, but we're here for it #AEWRampage pic.twitter.com/ADnV4hZXcb

Ricky Starks comes out on the mic, and the gist of it is he’s entered the World Eliminator tournament for the AEW World Championship, and he feels confident that he will be in the number one spot to face either Jon Moxley or MJF for the title.  I do hope he gets a chance to shine further

Guevara and Schiavone are still backstage, and as he probes The Spanish God’s mindset, Guevara shrugs it off and says the ROH World Title will stay with JAS. He does call out Danielson, and they have unfinished business.  Guevara wants a two out of three falls match to show everyone beyond a shadow of a doubt who is the best.

.@sammyguevara challenges @bryandanielson to a 2 out of 3 falls match at #AEWDynamite THIS WEDNESDAY. #AEWRampage is LIVE on TNT! pic.twitter.com/kDbeNaK0Gs

Mark Henry is now in the back with The Gates of Agony and WarJoe.  He asks Prince Nana if they are ready, and he confidently states that The Embassy is always ready, but wonders about WarJoe’s readiness. Wardlow talks over Samoa Joe (!) and dares Powerhouse Hobbs to attack him from behind again, and then they walk off camera.

Well, that’s been enough talks, says Henry, because “It’s time for the Main Event!”, and it’s…

The Gates of Agony (Toa Liona and Bishop Kaun, with Prince Nana) vs. WarJoe (Samoa Joe and Wardlow)

Wardlow just rushes at Kaun and puts the hurt on him, and he doesn’t have much of an answer for The Conductor of the Powerbomb Symphony.  Joe tags in, and he and Liona go toe to toe as The Embassy member becomes the focus of Joe’s trademark offense.  Liona takes a bite out of Joe’s head and then the dirty tricks catch up to him from the Gates of Agony, and during Picture in Picture, the numbers game catches up and he is a Samoan in Peril.

Liona wears him down, and as he rushes into the corner, for a splash, well…Silly Agony.  STJoe stops that nonsense right quick.  A hot tag to Wardlow, and he cleans house in a hurry.  He uses the ropes to get Liona for a slingshot German suplex and then spikes Kaun with a modified spinebuster for a pin cover but Liona breaks the count.  Joe grabs Liona for the Coquina Clutch, and that leaves Kaun alone with Wardlow.  Nana attempts to distract the big man and he sends him tumbling to the floor. Kaun tries to take advantage, but it’s all for naught as he strikes up the band for the Powerbomb Symphony as Liona is still locked in the Clutch on the outside of the ring unable to save his partner and Wardlow covers for the one, two, and three.

Your Winners via Pinfall:  WarJoe

As Joe and Wardlow celebrate their victory in the ring, out comes Powerhouse Hobbs to taunt the TNT champion, and then Wardlow pushes aside Joe(!!) to yell back at Hobbs.  This keeps going on, with Joe giving a very distinct “Are you serious right now?” look to his tag partner as the show fades to black.

I know what I said earlier about this being a Donut Show, but WarJoe/Gates and Shibata/Cassidy were the best parts of the show.  The only gripe I have is that the tag match should have been first, and then the All-Atlantic championship be the main event because that stole the show for this Rampage.  But that’s what happens when you become an armchair bookerman.