AEW Rampage: Taven and The Kingdom cometh for Wardlow 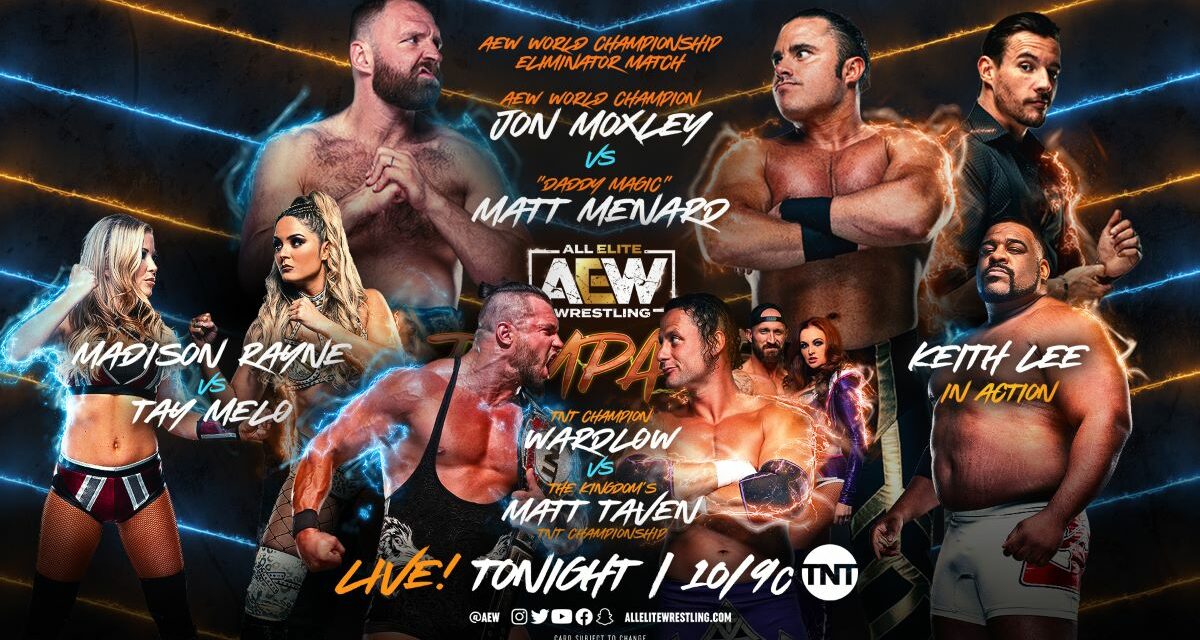 It’s Friday night, and you know what that means? No, not to bid farewell to The Killer with Great Balls of Fire, or hail the new Chief Twit, Elon Musk. It’s time for AEW Rampage, where Matt Taven wants to start a Trend of getting the TNT title at Wardlow’s expense.

But let’s head to the Mohegan Sun Arena in Uncasville, CT. Excalibur, Jim Ross, and Tony Schiavone have the call and our first match is … 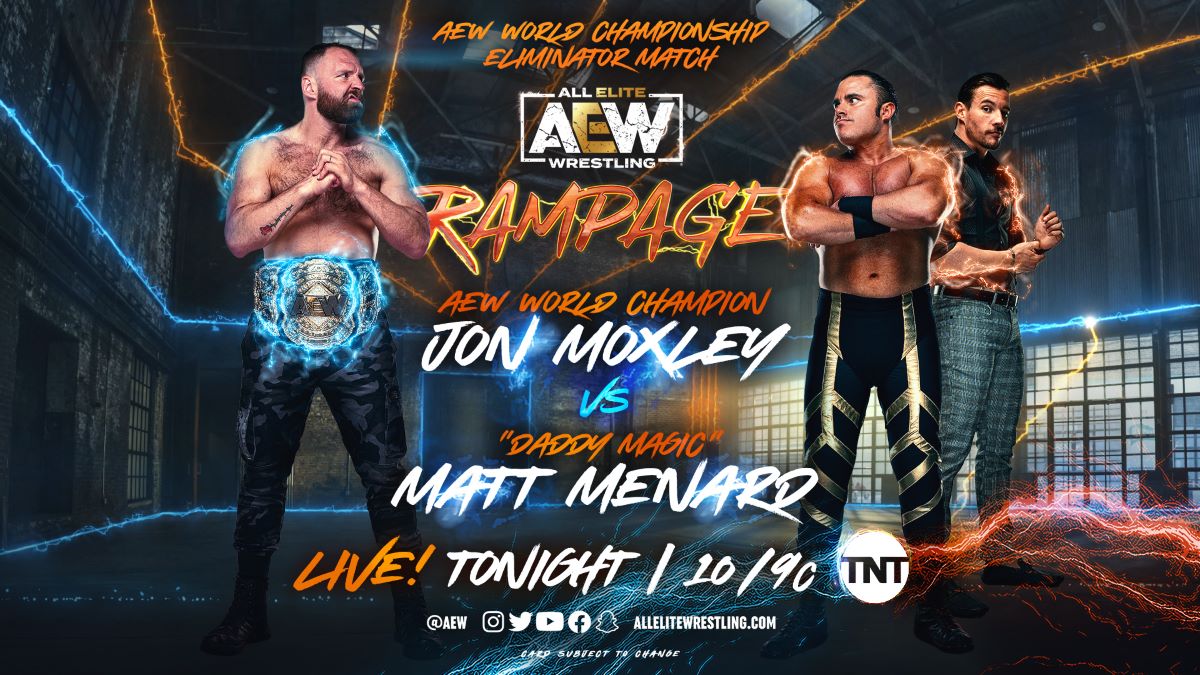 Menard is already in the ring, and Parker tries to distract the AEW World champion, but it’s time for unscripted violence by Moxley and he knocks Menard silly and sends him outside with punches and rakes his back.  Moxley gets a hammer throw to the corner but Menard comes out swinging, and that sends Mox outside, where Parker blindsides him and Menard adds by crotching him into the ring post.  During Picture in Picture, liberties are taken with Mox by Menard but soon he gets Daddy Magic up top with punches, but another distraction by Parker allows Menard to get a powerbomb.  He transitions into a Boston crab but Mox crawls to the bottom ropes to break the submission hold, and then he nails a desperation cutter and then fires back with a King Kong clothesline to Menard and follows with a suplex and then an ankle lock.  He goes for the Blackpool Stomp, but Menard reverses to use the same move.  However, Mox pushes up on his torso to reverse him into a rear naked choke and Menard quickly taps out.

After the match, Stokely Hathaway cuts his music and tells Moxley that next week on AEW Dynamite he’s going to fight “Taiga Style” Lee Moriarty. After a quick video package on the ‘Tron, Moxley is nonplussed by this, and promises Moriarty that he’ll “see his ass in Baltimore next week.”  Nice knowing ya, Moriarty.

Jade Cargill is doing pull-ups and she still harps on how Nyla Rose took her TBS title belt.  She wants it back and will prove to Rose once and for all that she is That B****.

Say what you will:  cutting a promo while doing pull-ups is damn hard.  I can barely do one and talk, let alone *a* pull-up.

But let’s get to the next match, and it’s…

As I prepared to do a Haiku in Review™, Lee just powerbombed Serpentico to hell, so in honor of this match, enjoy this squash recipe in a minute, which is the same time it took Lee to beat him.

Your Winner via Pinfall:  Keith Lee

As Schiavone tries to interview Lee, The Acclaimed comes out and starts asking about Swerve and what happened to Billy Gunn.  Suddenly, on the ‘Tron, Swerve appears with Gunn in an undisclosed location, and he wants a title match next week.  And to prove how serious he was, he takes a pair of pliers to Gunn’s fingers to insure there will be no scissoring. Castor and Bowens rush to the back to help their Daddy Ass mentor, and Lee is beside himself by the behavior of his tag partner.  Schiavone asked off-mic what the hell is going on, and even Lee gestured broadly he don’t even know.

Earlier last Wednesday, as the Jericho Appreciation Society was soundly beaten by The Blackpool Combat Club, everyone is beside themselves over the loss. but that lights a fire under Chris Jericho and he vows to battle any ROH Champion from the past and The Ocho himself promises a scorched earth policy. Melo also challenged Rayne because sports entertainers beat wrestlers every time, or something like that.

And that leads to the next match… 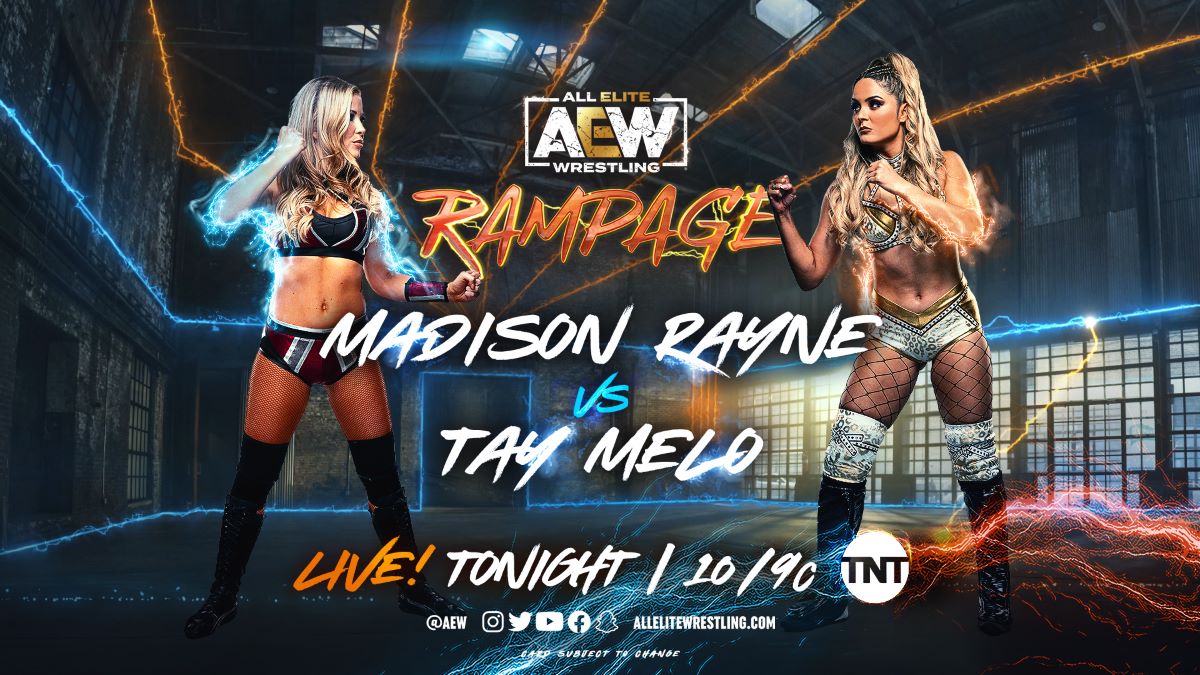 Something about this match struck me as familiar, since I did the same coverage almost three weeks ago, albeit it was a tag match, which leads me to this point:

I like Madison Rayne and have truly appreciated her work during her time in TNA/IMPACT Wrestling.  It’s also awesome that she is a coach for AEW and she obviously enjoys her role and the work she’s doing.  Kudos to her, I say.

That said, it does feel like she is currently in glorified jobber roles, and this match would be more appropriate on AEW DARK or DARK: ELEVATION.  That’s not me having a go; that’s me wondering why this match had to take place at all.  There’s no feud, nor any titles on the line.  It’s just…there.  If I missed something, I’ll be happy to entertain anyone who can explain what I need to get.  But honestly, I am not spending any more time than necessary on this match, other than to say in the time it took me to type this weird screed, Melo connected the Tay-KO to Rayne for the pin and the win.

Your Winner via Pinfall:  Tay Melo

Lexy Nair is backstage with Ethan Page about The Firm turning on MJF on AEW Dynamite. Page lays it out and says Friedman changed, even though it was The Firm that helped him get to the top spot. Once he changed, The Firm, by his rationale, was no longer obligated to help him.  Page also announces that he is entered in the AEW World Title Eliminator tournament, and promises he will beat Moxley for the belt.

Also of note, Dante Martin is entered in the same tournament, and while we’ve yet to hear all the players’ names, whoever is the finalist will challenge for the belt at the Winter is Coming event on December 14th.  Oh, and Mike Tyson will be on Rampage next week for commentary.  I can’t wait.

Mark Henry with Taven and Wardlow. Taven states his credentials, noting he won the ROH Television title when he first signed with the company and has been an ROH World Champion as well.  He states we’re living in the Time of Taven©, and the Trend (see what he did just there?  Huh!) is he will win the TNT title.  Wardlow likes the catchphrases, and just for that, he will add extra powerbombs to introduce him to his latest symphony.

Well, that’s been Enough Talk, says Henry, because it’s time for the Main Event for the… 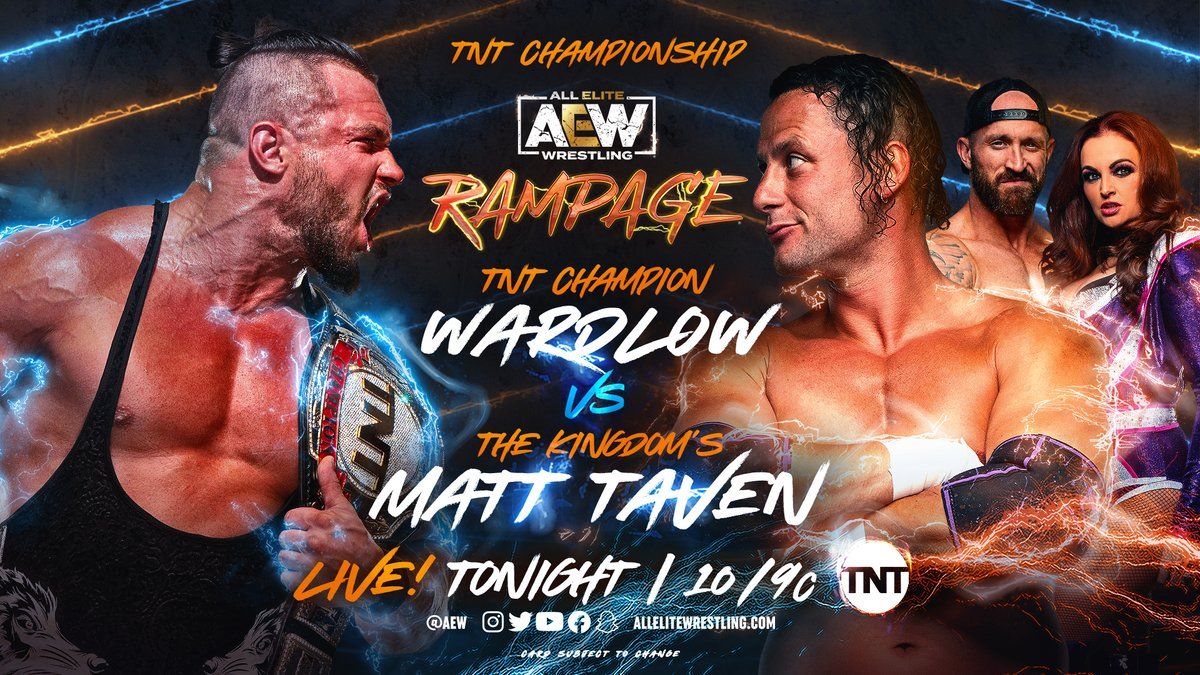 Chants of “Ward-low” echo throughout the arena, and as Taven hits his moves, Wardlow has too much power and he sends the upstart out of the ring with force.  Wardlow follows him and bounces his head off the guardrails.  Bennett attacks Wardlow to assist his Kingdom partner, and Wardlow is barely fazed.  As he turns his attention to Bennett, Kanellis gets in front of her husband and they provide a distraction long enough for Taven to hit a dive over the top rope to take the big man off his feet, and Bennett uses the opportunity to shove Wardlow into the steel steps.  Now the match favors Taven, as he lands a splash to Wardlow’s legs to take away his vertical base when setting up the Powerbomb Symphony, and during Picture in Picture Taven starts a Trend of picking apart the big man.

The TNT champ fights back, and Taven keeps his down with a running punt kick and follows with a stomp.  Wardlow sends him through an F10, but he’s still hobbled on his bad leg.  He continues to fight through and nails a clothesline to Taven, and follows up with a belly-to-belly suplex and a spinebuster, and now he strikes up the band.  Kanellis tries to distract Wardlow, and Taven rolls him up but Wardlow reverses to one, two, three, four Powerbombs of Symphony for cover for the one, two, and three.

After the match, Bennett chop blocks Wardlow and lay in a beat down until Samoa Joe runs out and takes out The Kingdom on behalf of his WarJoe tag partner.  But that also brings out Powerhouse Hobbs to face Warjoe, but they end up getting blindsided by The Embassy. Apparently, Hobbs is with the faction, and after they thoroughly beat down joe and Wardlow, Brian Cage and Hobbs pick up the ROH Television and TNT belts as the show fades to black.

The First Match and the Main Event are solid, but AEW Rampage is starting to become a Donut Show:  a lot of tasty stuff to go around, but a big hole in the middle.

I am curious about the next development between Warjoe and The Embassy and how it pans out, but for now, we’ll see you in seven.