NWA USA is dedicated to The Fixers 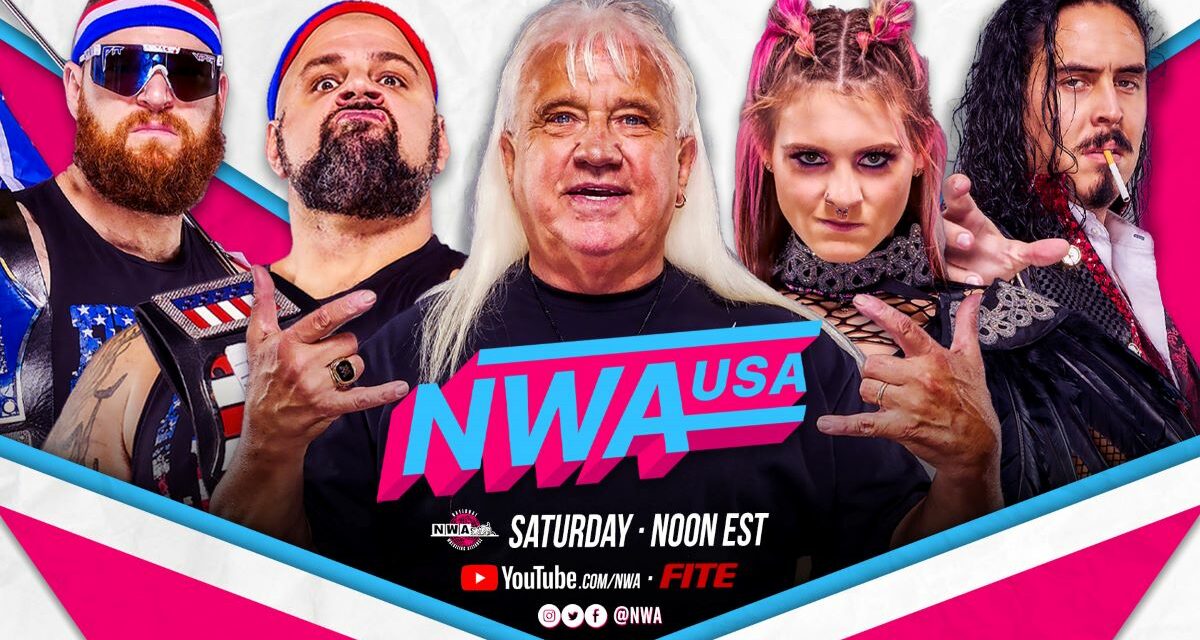 It’s a  new episode of NWA USA dedicated to the current NWA US Tag Team Champions, the Fixers. Why have this show?

(Say it with me, kids). Because Fixers Rule, and this is wrestling as it’s meant to be in the National Wrestling Alliance.

So let’s go to the Skyways Studios, in Nashville, TN.  Joe Galli and Velvet Sky have the call and your First Match is a… 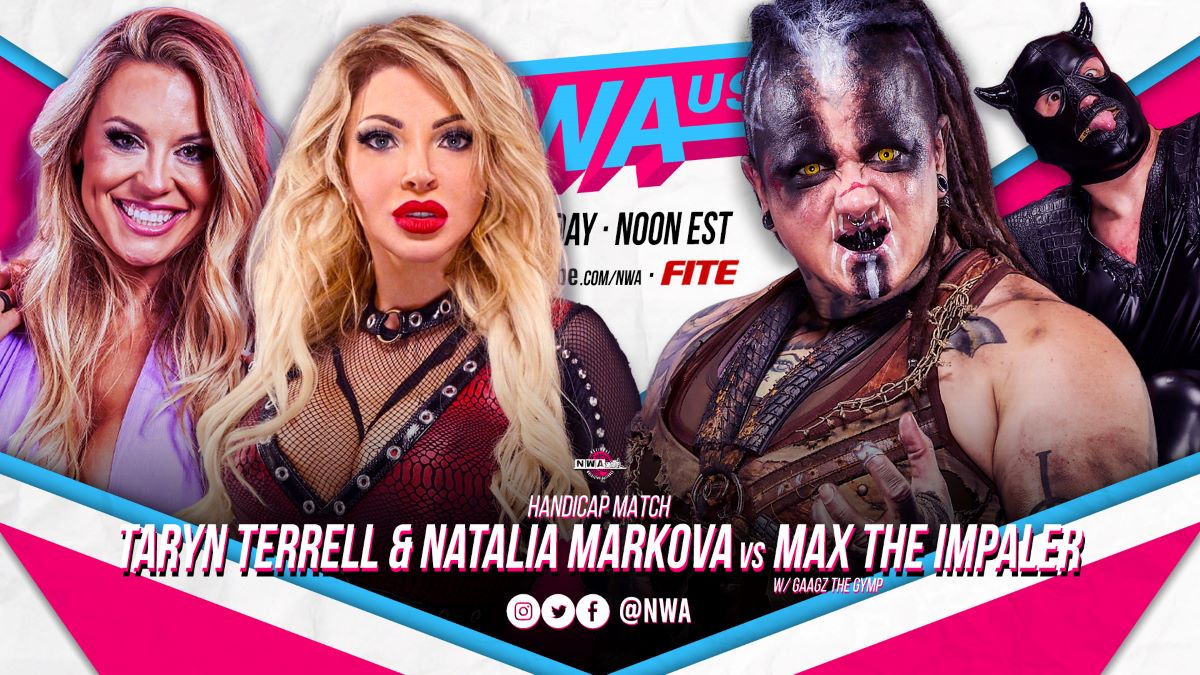 Gaagz has the broken Queen Bee tiara Max absconded way back when, taunting Markova.  Now neither Markova nor Terrell wants to start the match, so Max chooses for them and runs roughshod through both women.  Markova tries to stand up and she fails miserably against The Impaler.  She tries a sunset flip but Max turns it into a sit-out Splash for a two count.  Terrell tries to choke Max, but The Impaler has too much brute force as she back up into the corner to break the hold, and then she tackles Markova out of the gate.  Markova gets a jawbreaker and kicks at the monster, but Max stops her in her tracks. Terrell slinks out of the ring, while Markova gets a tornado DDT.  She tags to Terrell to set up Max for a High-risk maneuver, but she hesitates, and Max goes back to the beatdown.  Max sends Markova sent out of the ring, and Terrell tries to reaches out to her partner.  Max drags her back, and each time Terrell kicks her away, but the last time Max pins her with a boot with her head stuck out of the ring, and the Gymp unzips the tongue and delivers with the wettest of willies.

As I often explain to friends, fans, family, and my therapist:  I can’t make up any of this.  Anyway, one Welcome to the Wasteland later by Max, and Terrell is done.

Your Winner via Pinfall:  Max the Impaler

At The Podium with Kyle Davis is Jamie Stanley.  As the Chief Branding Officer of Colby Corino, he says his client is a big-time player.  Thus, by booking Corino to face Davey Richards at Hard Times 3 will prove that he is a top talent and that Stanely is the best agent in the biz.  Deal with it.

May Valentine is backstage with a Kerry Morton addressing the feud his family has with The Fixers. In so many words, Kerry sums it up as just another case of wrestlers looking to make a name for themselves at their expense, and he points out that he and his dad have scored wins already with each member of The Fixers, so his dad will get the win again in the main event tonight.

But let’s go to ringside for a… 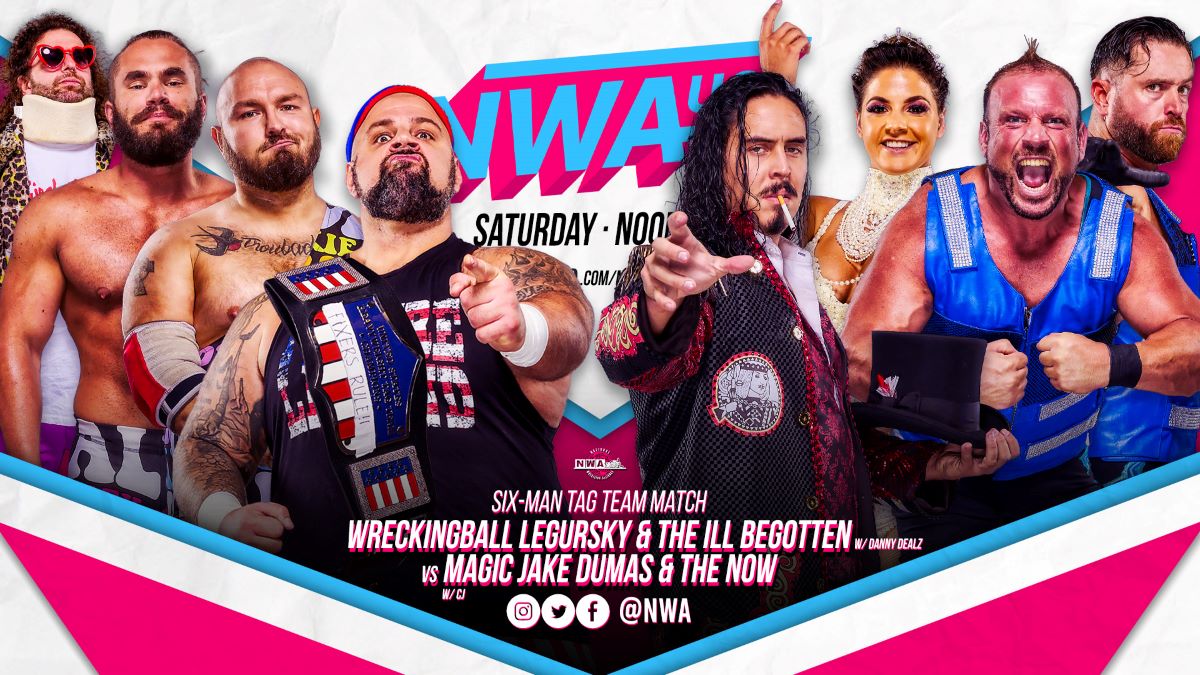 Dumas and Legursky start, and he offers a magic trick connecting his fingers like a chain.  Then he steals Legursky’s thumb. Witchcraft, I tells ya; it’s the unholy dark arts (sometimes called “Catholic school,” but I digress). Legursky has a trick up his sleeve in a punch to Dumas’ face (ta-da!).

Tag to Plunkett and he and Taylor double-team Dalishus and keep him isolated in the corner, and he is Now In Peril.  The Ill-Begotten score a double legsweep to pin for a two count, and they do quick tags keeping Dalishus off-balance. Taylor is sent out by a low bridge by Collins who works him over on the outside of the ring. Dalishus pins him, but Taylor has a leg on the bottom rope.  Collins is in and gets a scoop slam for another near fall. Kicking combos to a leg drop by Collins gets him another two count.  Now we have triple team action, as Dumas nails an axehandle smash to Taylor with an assist from The Now, and the Magic Bastard follows with a ripcord neckbreaker for a cocky cover that gets a two count.  He attempts a tombstone piledriver, and Taylor reverses to a Victory Roll for a near fall. Dumas tries again but Taylor manages a desperation backstabber.  he crawls to his corner and tags in Plunkett who gets some offense going, but The Now comes back with a double suplex for a two count. Collins gets a body slam and follows with an elbow drop that misses.  Plunkett gets the hot tag to Legursky and he is a Fixer en Fuego.  The end comes as Dalishus goes for a crossbody and Legursky catches him and transitions into a powerslam for the three count.

Your Winners via Pinfall:  The Ill-Begotten and “Wrecking Ball” Legursky

May Valentine is now with Flip Gordon, and she asks his mindset on his match with Colby Corino on next week’s NWA Powerrr. Gordon says he needs a win, and a big victory Tuesday night will show he is a must-see product.

Now it’s time for Stanley’s Drill with the Milk Made Girl, and she only says “Ja!” or “no!” to Stanley’s questions.  Even Stanley is wondering who booked her. Seriously?

But let’s go back to the ring for… 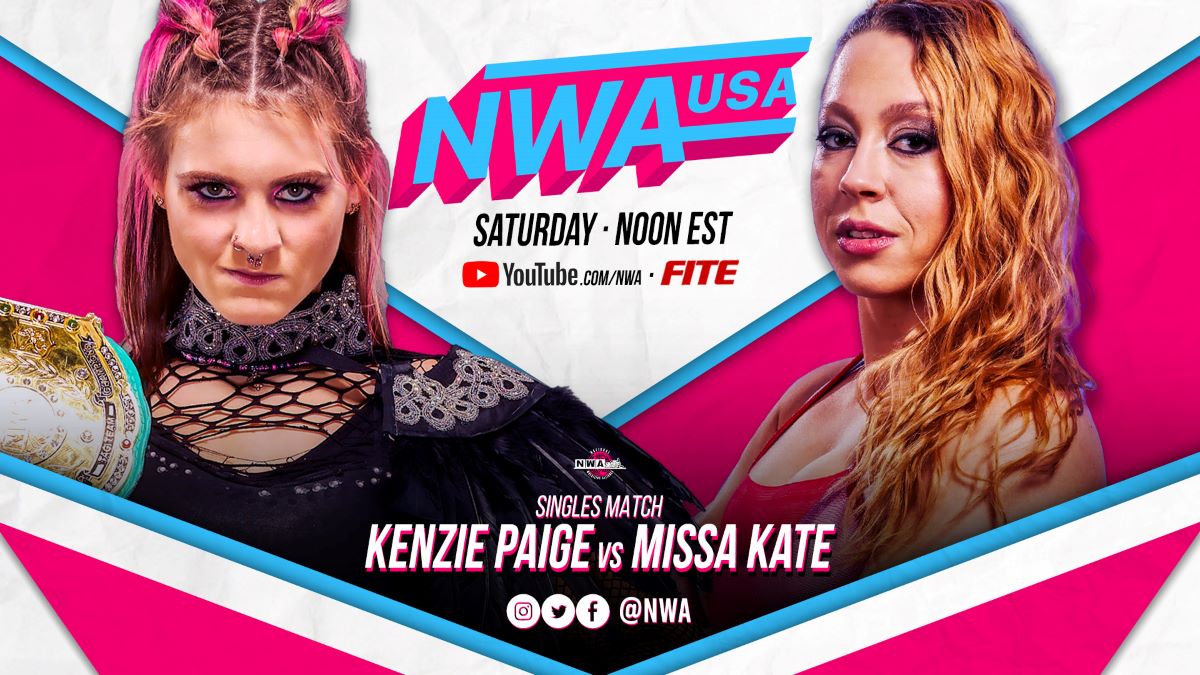 Galli and Sky bill this as a preview of what’s to come for the upcoming women’s tag team title match at Hard Times 3.  Both women are aggressive at the start, and Kate is in control over Paige.  Kate slides out and high-fives the crowd, with Paige following in hot pursuit.  Kate chops away at one half of Pretty Empowered on the outside of the ring.  As she send her back in the ring, Kate slides back in but Paige catches her with a unique backbreaker that stops her momentum and slows the pace of the match.  Paige goes to work and picks apart the upstart Kate, but it isn’t long before both women start throwing heavy bombs, as Galli says, and then they double clothesline each other to the mat.  They slowly get back up to a vertical base, but Kate gets Paige with a full Nelson and throws her head right into the middle turnbuckles to cover for a two count.  Paige goes for her Kenzie Cutter, but it’s blocked, and Kate nails with a spinning fisherman’s suplex for a close two count.  Kate goes for a roundhouse kick that whiffs and Paige gets her with a cravat and sends her to the mat and drapes a leg on her midsection while still having the cravat locked into a submission hold.  Kate has no choice but to tap out.

Your Winner via Submission:  Kenzie Paige

Valentine is now with “The Boss” Jay Bradley.  She asks The Fixer about how The Mortons have rebuked him and Legursky at every turn. Even Bradley is confused, as he tries to be a champion and take the high road. He doesn’t know why The Mortons won’t shake hands (or maybe he forgot that he and Legursky had Pearl Harbored them at every turn and sometimes at the behest of Colby Corino.  But hey…who focuses on details like that, right?). As for Spectaculars facing them at Hard Times 3 for the NWA USA Tag Team straps, he’s giving us a spoiler of how that match will go.  They’ll snap their bow ties in their faces and retain the belts, because Fixers Rule. Call the dirt sheets!

There’s a recap of Tyrus dealing with smack talk of Rolando Freeman from a couple of weeks ago, but read it here if you missed it last Tuesday

Kyle Davis is in the NWA Control Center with more match announcements. Hawx Aerie and Dirty Sexy Boys will fight on this upcoming NWA Powerrr to see who will face Le Rebelion for the tag team gold, and we’ll also have Team War with The Cardonas going up against The Spectaculars, and Rolando Freeman still holds two pinfall victories against Matt Cardona himself.

NWA President William Patrick Corgan and “Wrecking Ball” Legursky are at The Podium with Kyle Davis, and Corgan unveils the NEW NWA US Tag Team Belt design. The Fixers have a temporary design, but the new NWA USA tag belts according to Corgan are based off the belt The Original Sheik held in the Detroit days. Corgan tries to swap the belts, but Legursky says no and thinks Corgan is challenging him to a match.

(Author’s Note:  I like The Fixers’ antics, and comedy has its place in wrestling.  But this segment felt a bit forced and the joke went on way longer than it should have.  It’s like watching an open mic at a comedy club, and that one person is taking much longer onstage than they should have, even after his time was up.)

So let’s (finally) go to The Main Event, which is… 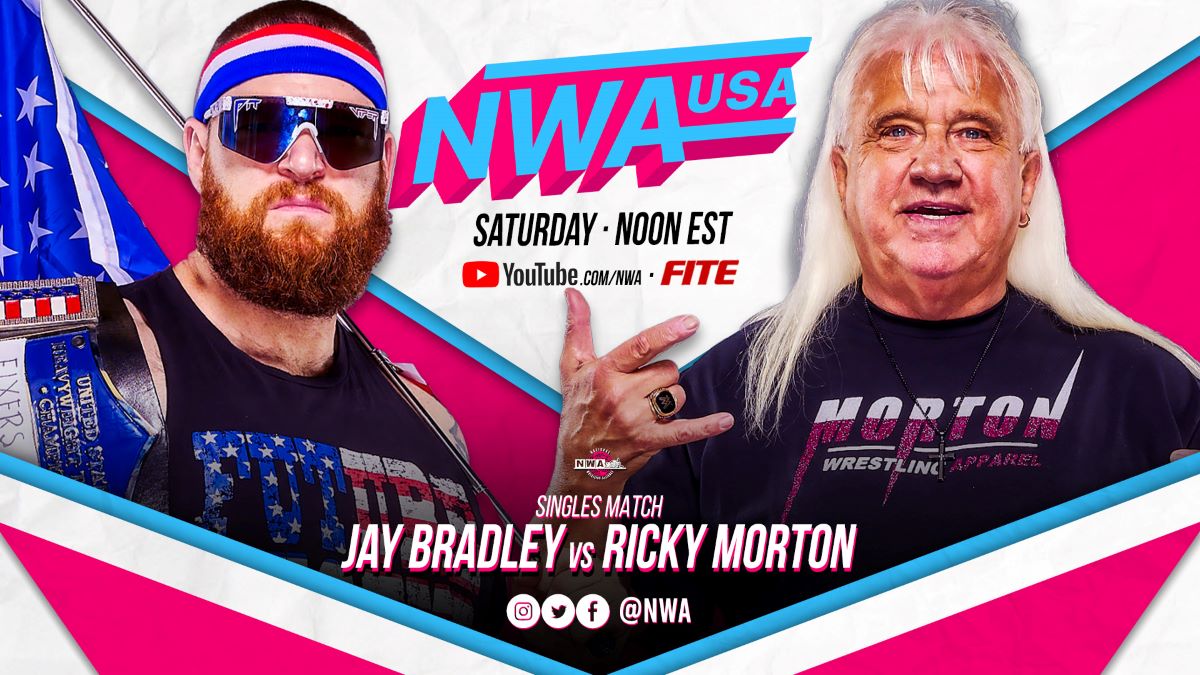 Bradley tries to get a “U-S-A” chant going, but the fans are all “Rock-And-Roll.”  Bradley offers his hand, and Morton ain’t trusting it one bit, so he gets a boot to his midsection, but The Boss is too powerful.  He sends Morton into the corner and rushes to tackle, but the Rock and Roller goes for a schoolboy rollup for a near fall.  This is a classic power versus wily veteran match, and Morton plays to perfection as he picks at the leg of Bradley.  He attempts a figure four, but Bradley gets a rollup for a  two count.  Bradley pounds at the NWA Legend, and then gets him in an abdominal stretch, but Morton reverses with a hip toss and goes back to work on the leg again.  But, it’s too much power as Bradley clubs away at his chest, and then delivers a powerslam to Morton for the pin as he covers for the one, two, and three.

The Fans are booing hard for this match result.  Bradley tries to silence the crowd, and once again offers his hand in sportsmanship, but Morton rolls away dejected by the loss.  Bradley is still flummoxed by this as the show goes to the credits.

The Strange Bedfellows match was good, and Kenzie Paige/Missa Kate had a fantastic match.  Paige continues to improve every time she is in the ring.  Max the Impaler is another impressive wrestler to keep an eye out for as well.

As for the show dedicated to The Fixers, Bradley was good, but the segment with Legursky was just too forced.  Hey, can’t win ’em all.

For now see ya next Saturday!