AEW Dynamite: MJF beaten down after firing the Firm 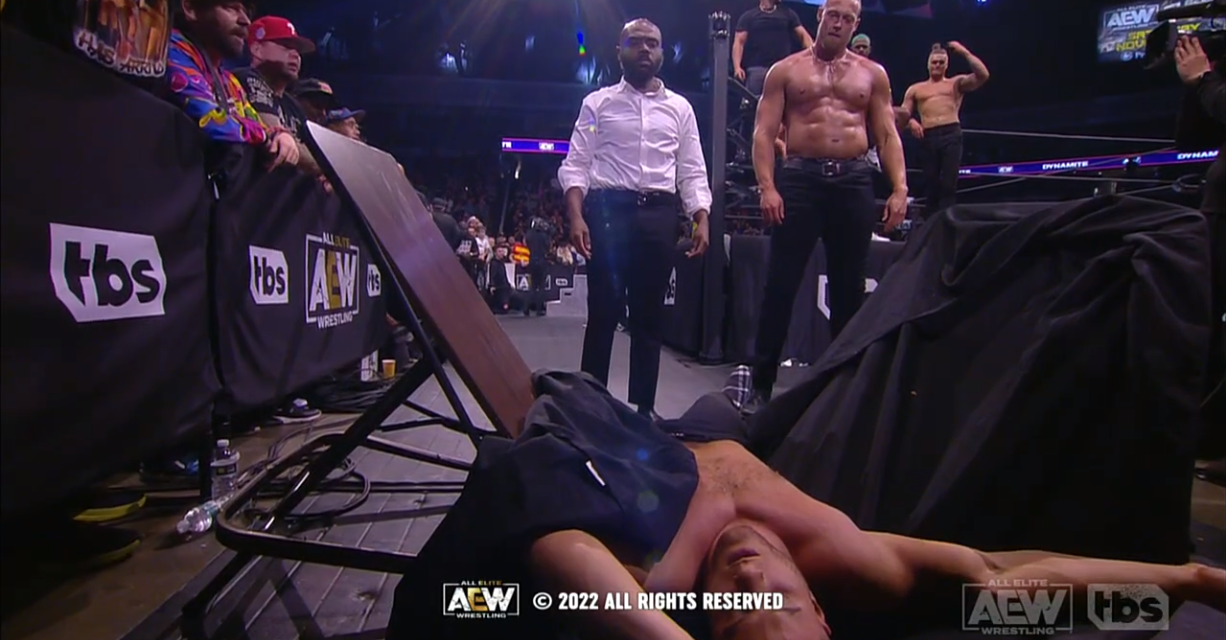 Dynamite returns to Wednesday night and they are bringing quite a show. The AEW World Championship is on the line, again. You can’t say Jon Moxley isn’t a fighting champ. He’s out here almost every week defending the belt. A number one contender will be determined for the AEW Tag Team titles, so let’s get to the action.

William Regal joins commentary. Garcia is shot off the ropes into a double boot from Claudio and Wheeler.  Garcia and Jericho get caught by Castagnoli and Yuta, who are looking to deliver hammer and anvil elbow strikes, but Jake Hagar and the JAS pull them out of  the ring. The Blackpool boys give chase and get them back in the ring. Garcia floats over on suplex attempt and then has to escape the giant swing. Jericho tags in. Hagar distracts Castagnoli, allowing Jericho to drop kick him off the apron.

After a commercial break, Garcia is trying to put Claudio to sleep, but Castagnoli powers to him feet and breaks the hold with a slam. Jericho tags in, knocking Yuta off the apron. Claudio blocks a Code Breaker and hits a pop up uppercut. Wheeler gets the hot tag, coming in with a diving splash. Wheeler escorts Garcia out of the ring and hits Jericho with a Samoan drop. Jericho kicks out at two. Jericho with a chop to the throat. Claudio makes a blind tag. Jericho hits a Code Breaker as Castagnoli sprung off the ropes. Wheeler takes out the JAS on the floor. With the ref distracted, Jericho grabs a bat. Claudio counters with a power bomb. Garcia tries to stop Jericho from going for a ride, so Claudio gives Garcia a ride on his shoulders as Jericho rides the swing. Claudio takes out the JAS on the floor. He hits a flying uppercut on Jericho and follows with the Neutralizer. Castagnoli covers and gets the three count.

Bryan Danielson tells Renee Paquette that he is a little frustrated that he lost to Jericho and that Daniel Garcia turned on him. He’s also frustrated that Wheeler Yuta talked back to him. He is going to take out all that frustration on Sammy Guevara. Yuta is glad Bryan is angry. Claudio has to step in between the two of them. After Bryan’s match though the Combat Club is going to sit down and have a talk.

We see a video package where the Elite are erased from AEW. Hmmmm…..

The Jericho Appreciation Society is not happy they last that match. Jericho is upset that a bat, a bat that he brought, was in the ring when he lost. Jericho issues an open challenge to any former Ring of Honor champion. Guevara vows to beat Danielson, tonight.

The Gunns are in the front row in FTR costumes. The champs, the Acclaimed, make their way out on stage to watch the match. Swerve and Cash lock up and trade holds. Dax tags in, hitting a snap suplex and a lag drop. Keith Lee makes a blind tag. Wheeler makes the tag for the Big Rig, but Lee blocks it. He leapfrogs both men and takes them both out with a pounce.

After the commercial break, Harwood gets driven into the corner. Lee misses the splash, but Swerve tags himself in. A back body drop sends Cash into is own corner and Dax tags in. Harwood chops away at Lee and sends him to the floor. Swerve and Dax trade near falls. Harwood with a suplex. Cash tags in. Harwood with a powerbomb and Wheeler hits a dragon suplex. Swerve kicks out. Lee makes the tag and Cash is all alone in the ring. Swerve kicks Dax to the floor. Lee with the powerbomb, but Wheeler kicks out at the very last moment. Wheeler with a hurricanrana to Lee. Dax saves his partner from a stomp, catch Swerve in the air. Harwood hits the slingshot power bomb, only to get pounced by Lee. Wheeler and Lee fight atop the turnbuckle. Dax tags himself in. Cash tags in. Dax hits the superplex on Lee, and CAsh splashes him, but lands on Lee’s back. Wheeler only gets a two count. Swerve breaks up the Big Rig. Cash with a thrust kick Swerve. FTR hits the Big Rig on Lee, but Swerve is able to break the pin. Wheeler is taken out on the floor and restrained by the Gunns. Swerve with a low blow to Dax. Lee with the Spirit Bomb. He covers to get the win.

Winners via pinfall: Swerve in our Glory

After the bell, the Gunns attack FTR only to get run off by the Acclaimed.

Britt Baker crashes Saraya interview. Renee Paquette breaks up the spat, saying they will talk about this properly.

Paquette gets a word with MJF on stage. He mocks Moxley with a bad impression. MJF thinks Moxley is mid, with all due respect. Max isn’t happy that William Regal implied he can’t beat Moxley with out Dynamite Diamond Ring. MJF promises he won’t use his ring at Full Gear. All he needs is a grudge and he is chock full of them. MJF is going to fight everyone who told him he wasn’t good enough, metaphorically. Stokely Hathaway interrupts, telling MJF that they won’t lay a hand on Mox. MJF slaps the microphone out of Stokely’s hand. He wants Moxley at 100% so he has no excuses. If anyone touches Mox, Hathaway is fired.

Guevara swing around the ropes, delivering a kick to the back of Bryan’s head. He follows with a springboard moonsault. Bryan answers with knees to the head. Danielson chops Sammy in the corner. Guevara fires back, but Danielson just absorbs the blows to deliver a headbutt. Bryan with a stomp to the elbow. Sammy rolls out of the ring to avoids getting his head stomped into the mat. Guevara counters the suicide dive with a rising knee and hits a springboard moonsault.

After a commercial break, Sammy kicks away with round kicks. Bryan catches one and slaps Guevara to the mat. Bryan alternated kicks and chops in the corner. An elbow strike takes Sammy to the mat. A back body drop sends Sammy to the floor and Bryan with a flying elbow strike. Danielson hits a shot gun drop kick. Sammy hits a standing Spanish Fly. Guevara goes up top, but Bryan chops him down. Danielson with a throw off the top, but Sammy lands on his feet. Guevara gets caught and Danielson applies the Lebell lock. Sammy is able to get to the ropes.

Danielson goes back up top and Sammy leaps to meet him there. Guevara hits the Spanish Fly, but only gets a two count. Danielson counters out of the GTH and hits a reverse hurricanrana. Danielson hits the Psycho knee. He then stomps away at Sammy and locks in the Triangle choke. The ref calls for the bell as Sammy passes out.

Rey Fenix is looking forward to his brother becoming a double double champion. Christian Cage interrupts and wants Luchasaurus to get a shot at the All Atlantic Championship. Orange Cassidy saunters in and is cool with that.

Hayter rag dolls Riho and just runs her over. Riho bridges up, avoids contact and hits a hurricanrana. She low bridges Jamie and takes her out with a splash on the floor. In the ring, Hayter hits a snap suplex. Riho with a stomp. Rebel jumps to the apron and Riho takes her out. Hayter kicks out of a pin after a northern lights suplex. Riho with a cross body, but Hayter rolls through and hits a brain buster. Riho kicks out. Riho with another hurricanrana. Baker grabs Riho from floor. Hayter catches Riho on a sunset flip, but Riho hits a Code Red. Hayter kicks out of the pin. She goes up top, but Hayter avoids the stomp. Jamie hits a back breaker, but Riho counters the Rip Cord with a dragon suplex. Hayter dodges a charging Riho. Hayter hits the Rip Cord. She covers Riho and gets the three count.

Eddie Kingston tells Renee Paquette that he is great. He doesn’t seem great.

Darby Allin told Sting that he wasn’t happy and wanted to prove himself by himself. Allin knows his biggest weakness is himself.

Jay Lethal tells Allin that he is in for a rude awakening.

The two tee off on each other to start the match. Moxley is sent to the floor and Penta flies over the ropes to take him out. Back in the ring, Penta runs into a high boot. Mox with a belly to belly suplex, sending Penta into the turnbuckle. Mox rains down fists in the corner. A thrust kick stops Mox in his tracks. Penta hits a sling blade. Moxley counters a slam with a cutter and follows with a piledriver. Mox drops the hammer and anvil elbows and transitions into a bulldog headlock. Penta escapes. Mox stomps on Penta’s head. Penta snaps Moxley’s arm.

The two fight on the apron. Penta staggers the champ with an enzuguri. Mox counters a destroyer on the ring steps with a DDT. Mox hits the King Kong lariat in the ring. Penta kicks out. Mox sets him up on the turnbuckle. Penta drops down, gets Mox hung up in the ropes and hits the diving foot stomp. Penta with the Fear Factor, but Mox kicks out of the pin. Mox hits the Paradigm Shift and follows with the Death Rider. Mox covers Penta and gets the three count.

At the bell, Mox is attacked my W Morrisey and the Firm. Stokely Hathaway walks to the ring. AEW security gets beaten down. The Blackpool Combat Club has been locked in their room, as Mox is taken apart. Austin Gunn with  chair, but Mox fights back. Colton Gunn knocks Mox back down.

MJF walks out on stage, conflicted. He runs in, pushing the Firm away. He fires Hathaway. Ethan Page clocks MJF, and the rest of the Firm beat MJF down. Page hits Max with the Ego’s Edge. Morrisey dumps MJF out of the ring. Morrisey choke slams MJF through a ringside table.

Another night of solid wrestling from AEW tonight.  The first two tag team matches were excellent. As much as I want to see FTR take on the Acclaimed for the titles, running it back with Swerve in our Glory isn’t bad, especially when Swerve is using underhanded tactics to win. This should sow even more division between him and Keith Lee. In the main event, we all knew that Penta wasn’t beating Mox. But it was interesting to see the Firm beat down Mox after being told by MJF not to touch him. MJF then getting bet down by the men he had just fired adds an nice wrinkle to that story.