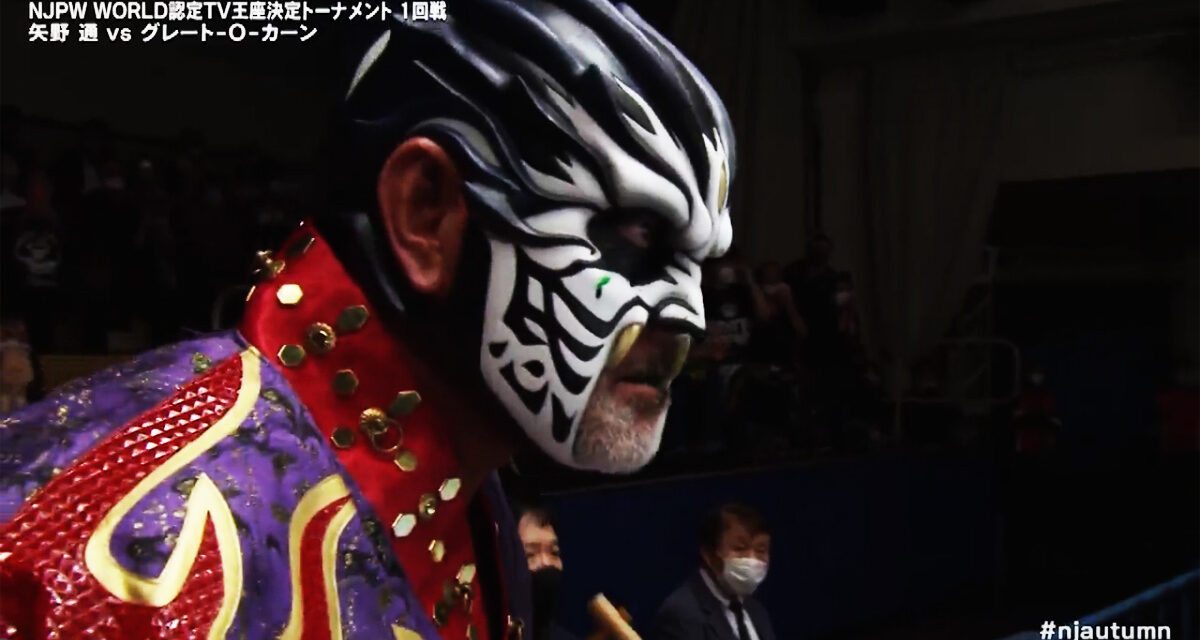 The Great Muta has made his presence felt in NJPW once again. The wrestling legend who will be retiring from the business next year interfered in The Great-O-Khan’s NJPW TV Championship Tournament match against Toru Yano. This could be NJPW setting up a Wrestle Kingdom match between Khan and Muta.

In the match, Yano tapes Kahn to a ringside barrier by his ponytail. Gideon Grey frees Khan. When Khan gets back into the ring he chokes Yano with his ponytail.

As Khan is about to put the finishing touches on Yano, the lights in the arena go off. When they come back on The Great Muta is standing at ringside. Khan turns around to see him and is stunned. Khan starts berating Muta. When he sticks his head through the ropes, Muta sprays the green mist in his face. Yano rolls up Khan and gets the win.

In NJPW, Muta has been an IWGP Heavyweight Champion four times and an IWGP Tag Team Champion six times. 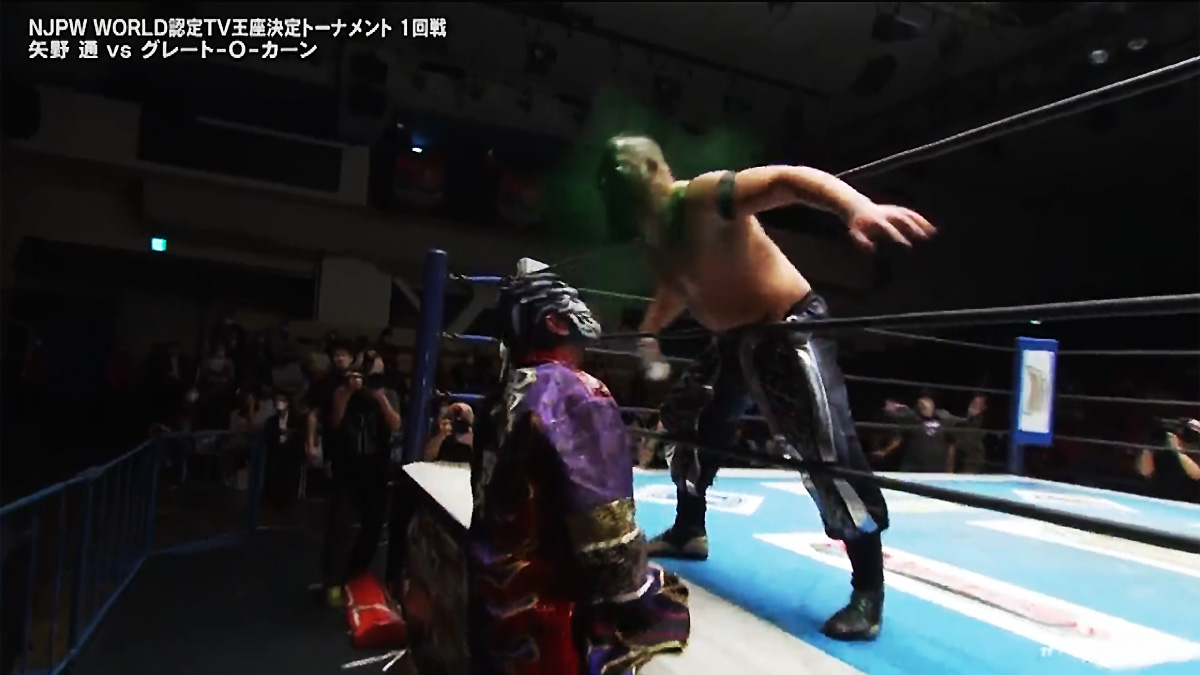 The Great Muta has a message for Khan. Courtesy: NJPW.

The next NJPW TV Championship Tournament match saw a shocking upset. Ren Narita defeated veteran Tomohiro Ishii after returning to NJPW from excursion only this month. With the crowd solidly behind him Narita kicked out of Ishii’s sliding lariat, escaped his Brain Buster with a knee to the head and pinned him with a snap suplex off the ropes. It marks the biggest, most important win in Narita’s career. 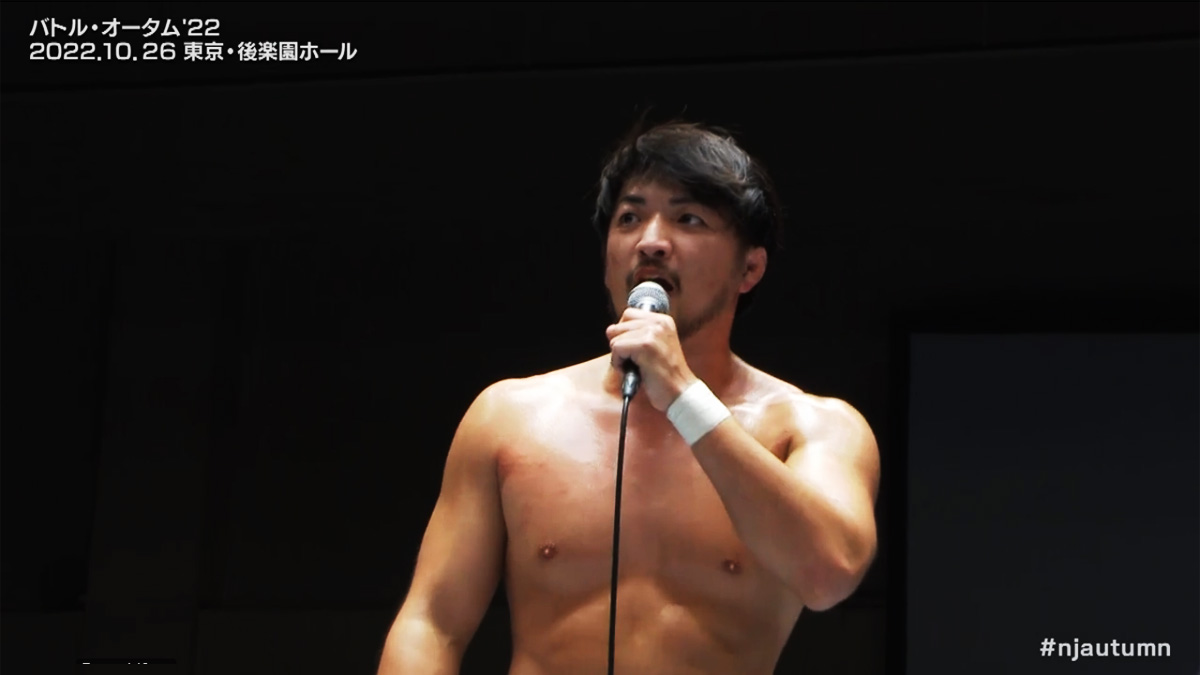 It seems like Ren is the real deal. Courtesy: NJPW.

Only a few short hours after NJPW gave NEVER Openweight Champion Karl Anderson an ultimatum, Hikuleo issued a challenge of his own at Battle Autumn. 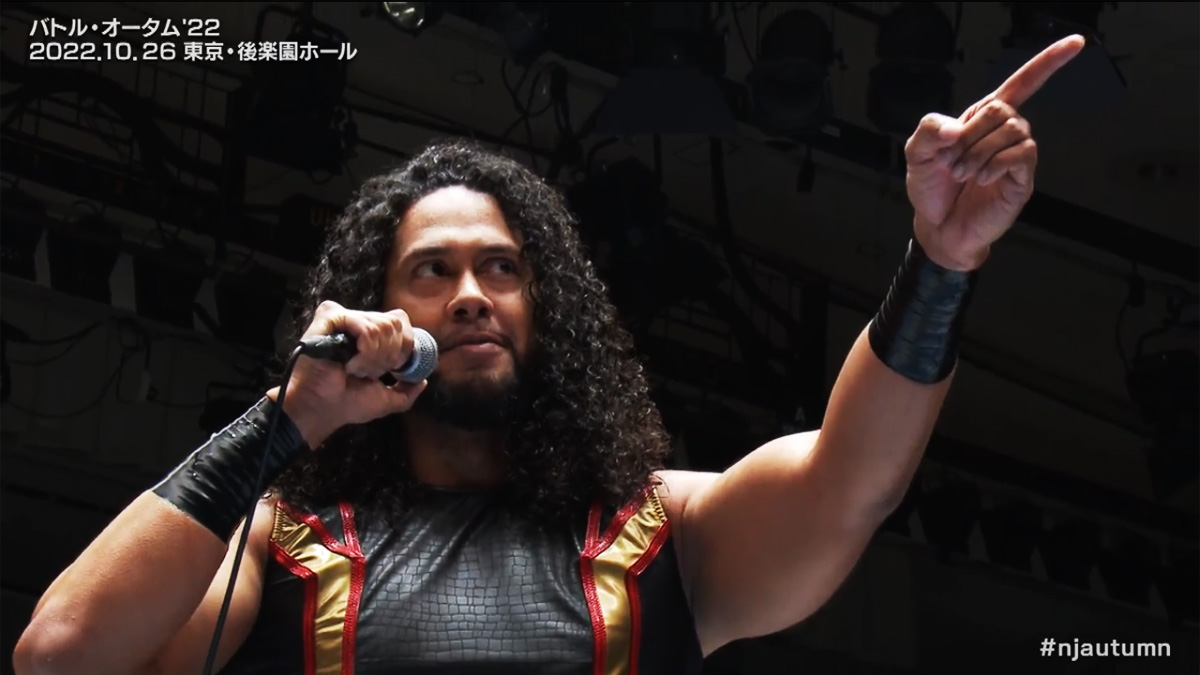 “Karl Anderson! Look what you did! New Japan wants to take the belt off of you. No. No. No. No. New Japan, don’t take the belt off of him. I will fight Karl Anderson! Anderson, when you are ready, when you are done running, come back to NJPW! I will be waiting. We will be waiting. Bring the NEVER Openweight Championship with you and fight me!” he said as the crowd cheering and he slammed down the microphone.

The quarter-final round of the NJPW TV Championship Tournament is as follows:

The first ever NJPW TV Champion will be crowned at Wrestle Kingdom in January.

Henare spears his opponent through the mat for the win. He then beats the snot out of the other Young Lion.

Alex Zayne puts Taka away with his Cinnamon Twist. Finlay and Sabre Jr. brawl after the match until they are separated.

Hikuleo pins Togo with a powerslam and a chokeslam. The crowd was really into Hikuleo.

As Ishimori distracts the official, Kenta rips off Taichi’s snap-off pants, punches him in the “lower abdomen” rolling him up for the win.

Makabe misses his Lariat. Sanada rolls him up and pins him.

Akira and TJP double drop kick Titan out of the air. Akira pins Bush after he and TJP hit him with double running knee smashes.