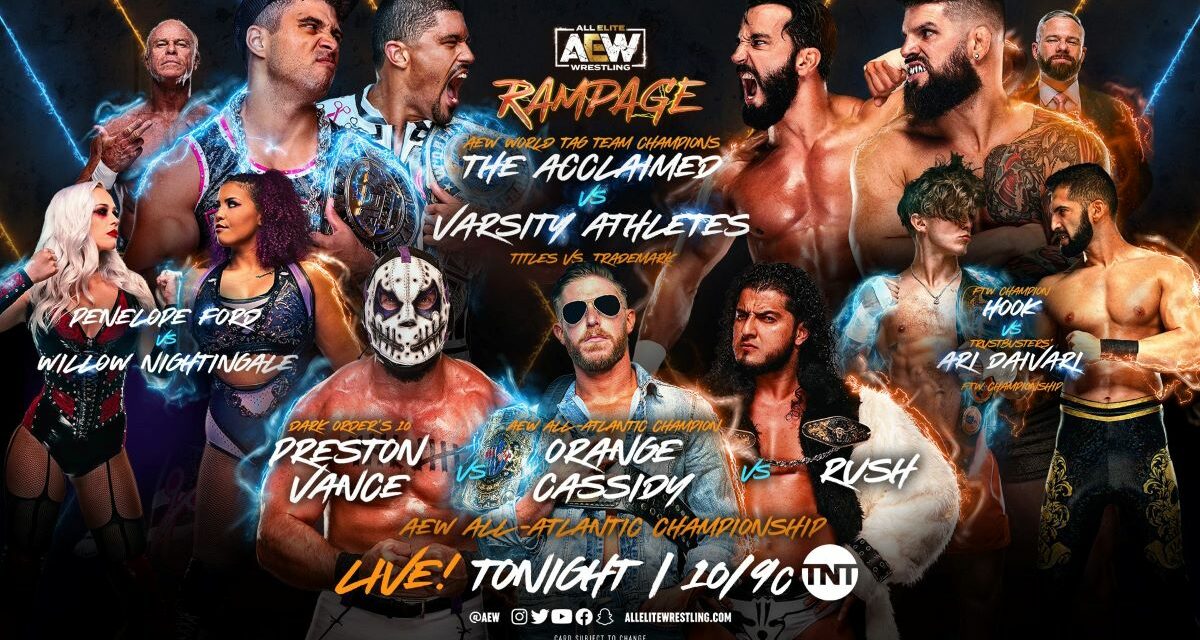 It’s Friday night, and you know what that means? No, not to see a broody DC film, or plan a buyout. It’s AEW Rampage, and not only is there a triple-threat match for the AEW All-Atlantic championship later tonight, but the AEW tag belts are on the line. Sterling trademarked “Scissor Me” from The Acclaimed, and now Castor and Bowens will put their titles on the line so that they can reclaim their catchphrase from The Varsity Athletes.

Yeah, that hurt my head, too, when I thought about it.  But as a wise man taught me; you buy the bit, you buy the premise.

But let’s head to Daily’s Place as we are live (!) in Jacksonville, FL. Excalibur, Tony Schiavone, and Jim Ross have the call, and let’s get into the First Match of the night for the… 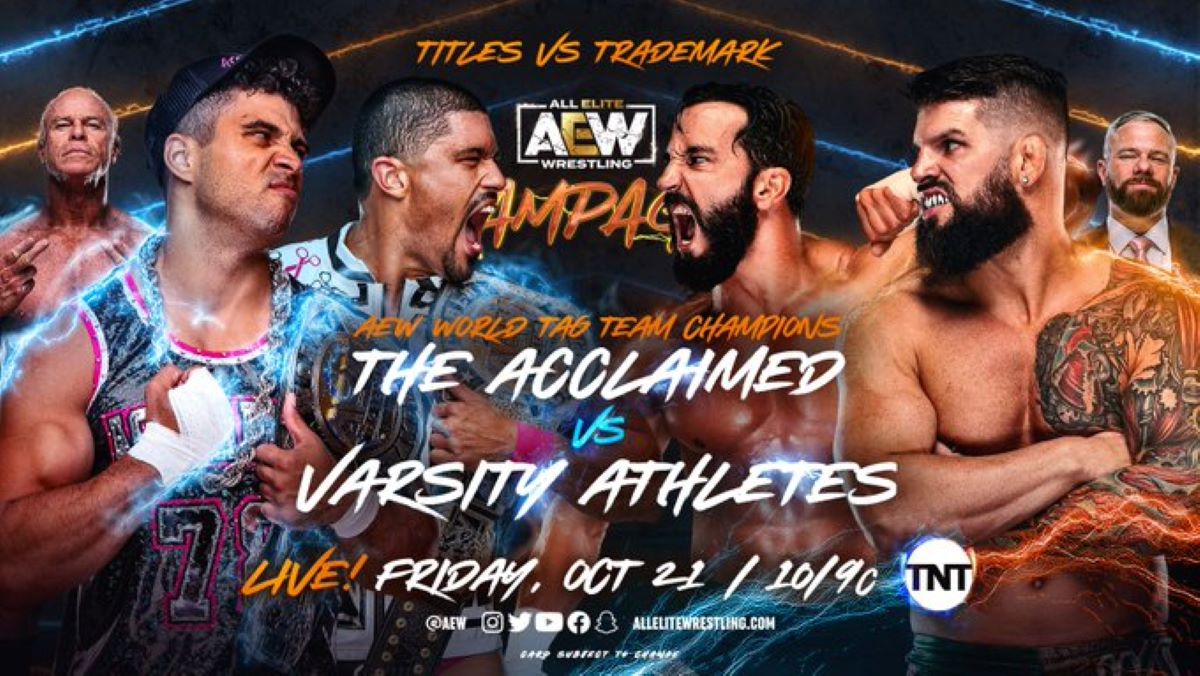 Sterling tries to exploit the trademark of “Scissor Me”, but The Acclaimed are not having it and it’s a Pier Four Brawl right from the start.  The Acclaimed look good from the start, but soon Woods goads Gunn and as “Daddy Ass” chases him into the ring, the ref is not having it and he gets ejected.  As Castor and Bowens try to plead his case to no avail, the Varsity Athletes take advantage of Castor and during Picture in Picture, he is In Peril at a Platinum Level.  Castor takes the fight to Woods and hits a flying crossbody on Nese.  Dazed, he crawls to his corner and gets the hot tag to Bowens, and he is an Acclaimed En Fuego.  Woods managed to put an end to that offense with a running knee strike to Bowens and dumps Castor on the mat.  The Athletes double team on Bowens to a spinning neckbreaker that was badly mistimed, but Nese covers and Castor makes the save at the last second.  The end comes as The Acclaimed isolate Nese, and Bownes nails The Arrival, followed by Castor’s Mic Drop and they secure the pin and the win.

Your Winners via Pinfall:  The Acclaimed

But before that can celebrate further, Sterling claims he still owns the trademark and isn’t giving it up.  Gunn comes back out to end this nonsense and throws him in the ring. The Acclaimed give Sterling his just desserts and split the difference in the middle…by stomping him on the crotch.   One Scissor Me Timbers to Sterling, and once again The Acclaimed can now proudly (and legally) say:

Earlier, Schiavone spoke to Jade Cargill, and she is not a happy camper since Nyla Rose absconded with her TBS title. Her Baddie, Leila Gray will face Willow Nightingale later tonight, and she tells Schiavone to “cut the s***,” because she wants to get her damn belt back.  She’ll hold up the show if she doesn’t get it in her hands.

Due to a preshow injury, @thePenelopeFord will not be able to compete later tonight against @willowwrestles, taking her place is @TBSNetwork Champion @Jade_Cargill’s Baddie @Miss_LeilaGrey! #AEWRampage is LIVE on TNT!jjjjjjj pic.twitter.com/RbitbzeVV9

Alex Marvez is backstage with Ortiz, Penta 0M, Rey Fenix, and Abraham Abrahantes all have a “Come to Jesus” meeting for Eddie Kingston.  They love him, but his temper is starting to get the better of him, and they need him to focus. Even PAC comes out and tells him to listen to his friends because they’re Trios champions, and he reminds Kingston that his temper made him lose a match to Guevara at Grand Slam in his own backyard of Queens.

Now for a match *somebody* wanted on Rampage, this is for the… 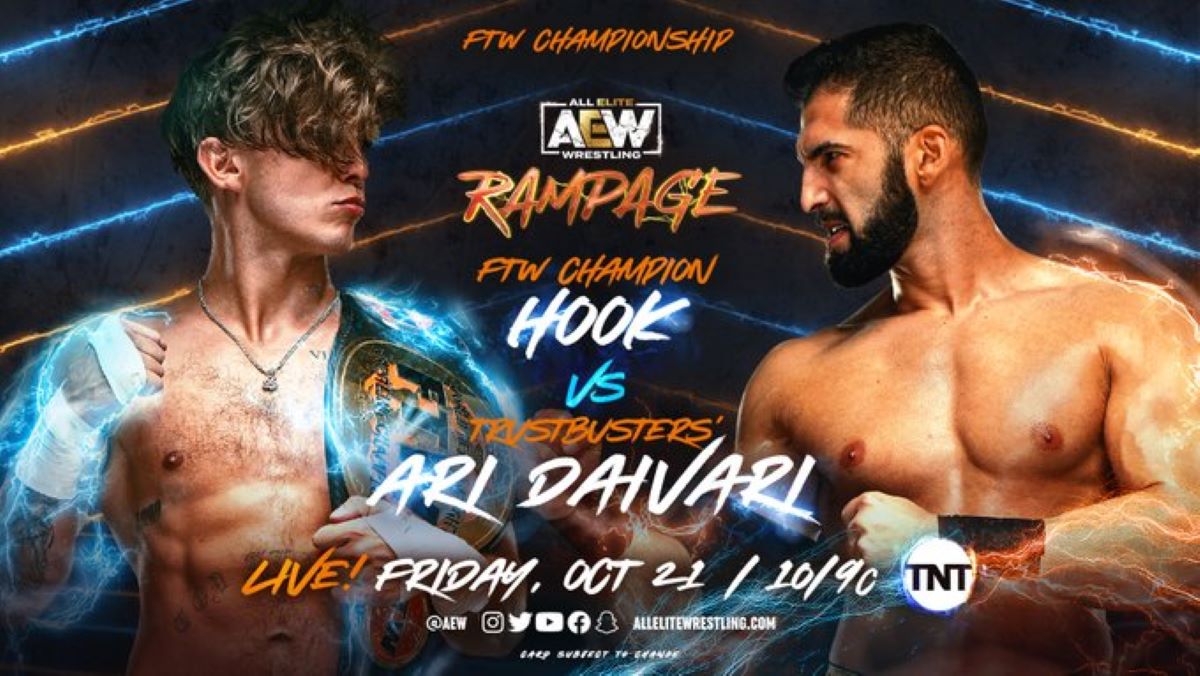 The chyron during the ring introductions said Hook snubbed the Truthbusters’ $50k offer to sell the belt.  Well, Davairi is here and he’s willing to offer cold hard cash for the belt.  Hooks slaps it out of his hands, and this is where I deliver to you all a Haiku in Review™:

Your Winner via Pinfall (and How ‘Bout Dat?):  Hook

Lexy Nair is backstage with members of The Firm Stokely Hathaway and Ethan Page, who now own the contracts of Private Party and Matt Hardy.  Speaking of which, Hardy wonders why he is here and where’s Private Party.  Hathaway says the Party is training at the Stokely Hathaway Wrestling Academy (SHWA) to get Hardy’s teaching out of them, but they wanted to let him know he has a match next week…on AEW DARK.  Hardy then raps…something, and I can’t tell if Hathaway and Page walk away thinking that was corny, or that he has some skills.

(Author’s Note:  Hardy did good spitting rhymes.  Hey, maybe he could team with The Acclaimed?  He can rhyme and their good at busting up B.S. lawsuits and contracts.  Just a thought.)

But let’s head ringside for…

Grey tries to evade the tie-up until Nightingale gets a waist lock on her for a takedown, and then it’s all about the Babe with the Power, as she gets a shoulder tackle and then a short arm lariat to a slam to Grey.  Grey rolls out for a breather, and Nightingale gives chase. As Grey ducks back in the ring and Nightingale climbs between the ropes in pursuit, Hogan pulls her boot.  As she confronts the other Baddie, Hogan superkicks her, and Grey definitely appreciates the assist.  During Picture in Picture Grey takes advantage and keeps up the hurting.  Nightingale tries to get back on offense but Grey keeps her grounded, and then…

We come back and now Willow apparently laid out Grey for a comeback and….excuse me for a second, folks…

(Author’s Rant:  What in the name of Full Sail University made some insipid troglodyte reject from film school decide to cut out at the point when Nightingale was making a comeback?!  I should find that mush-mouthed director, lash him to a swivel chair, and only make him cut out jobber matches on RAMPAGE instead of decent matches like this, with the full threat of a Doberman attack on their nether regions that would make Scissor Me Timbers look like a tickle party!!)

*ahem*  Yes, well…time to cut down on the pure mezcal.

Anyway, a roundhouse kick by Nightingale leads to her delivering the Doctor Bomb to end it for Grey.

Your Winner via Pinfall:  Willow Nightingale

Tony Schiavone comes out and announces to Daily’s Place that she is All Elite. As awesome as that sight is, Cargill breaks up the party, sets up a chair to hold up the show, and gives Nyla Rose ten seconds to bring her belt back. As she counts down, Rose is on the jumbotron, and shows off not only the TBS Belt, but her own call, and then proceeds to joyride. Cargill is still not moving.  and that brings out security to, hilariously, escort her out, and the Head Baddie lays them out.

Apparently, the main event came about last week, when “10” and Rush had a staredown, and Orange Cassidy came from behind a bar and offered beers.  Since neither man wanted a drink, Cassidy offered them both a shot at the All-Atlantic belt.

Coming up next on #AEWRampage LIVE on TNT! pic.twitter.com/F09pmaXQDP

Now Mark Henry has “10” and  Negative 1, and Rush is with Jose the Assistant.  But where’s Cassidy?  Oh, wait, he’s in the shot with Mark Henry.  Why did Cassidy make the match, asks Henry?  Cassidy responds, “Umm…I dunno.  I did because I felt like it.”  “10” and Rush each offer their side of what they’ll do to claim the All-Atlantic championship, but Cassidy is all…whatever.

It's TIME for the MAIN EVENT!#AEW All-Atlantic Champion @orangecassidy puts the title on the line against @rushtoroblanco and #DarkOrder's @Pres10Vance!

Looks like there’s been enough talk, says Cassidy.  Henry says (before Cassidy took his catchphrase), “It’s time for the Main Event!” and it is for the… 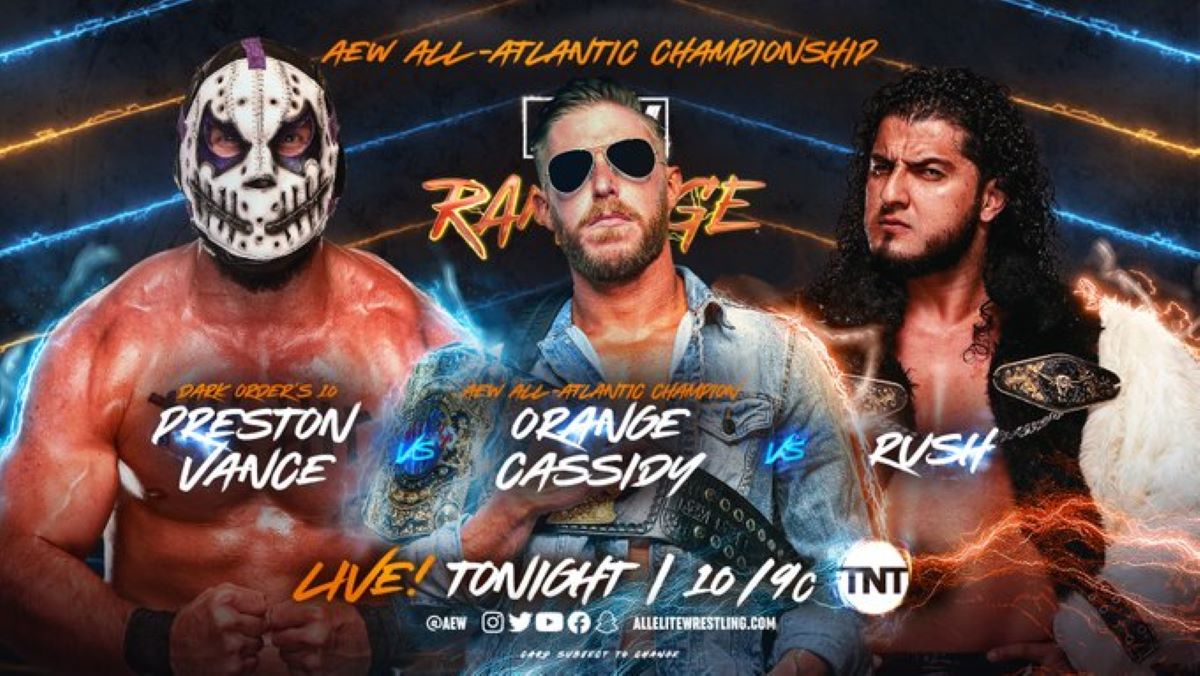 AEW All-Atlantic Championship: Orange Cassidy(c) vs. “10” vs. RUSH (with Jose The Assistant)

RUSH and “10” slug it out at the start and Cassidy watches.  He then puts his hands in his pockets as he lays in the “stiff kicks.”  RUSH belts 10 out of the ring and then turns to Cassidy, as he shoots the ropes and dropkicks El Toro Blanco, and then hits a tope suicida.  Cassidy goes up the top turnbuckle for a high-risk move, but RUSH catches him with a head butt. Cassidy lays in the corner and RUSH runs and…psyche.  Just a Mafia kick to his head, and now the La Faccion Ingobernable member is feeling tranquilo.

RUSH goes out of the ring and brawls with “10” as Daily’s Place boos heartily.  He then whips “10” with TV cables, and then does the same to Cassidy, trying to choke him out.  “10” comes back with clotheslines and then chops atRUSH’s chest.  Back to brawling on the outside of the ring, and Cassidy attempts another tope, but they catch him mid-air, and powerbomb him onto a table that doesn’t break (ouch!).  During Picture in Picture, RUSH is fully in the driver’s seat, drags “10” in the ring, chops him in the corner, and then dropkicks him to the back of his head to cover with a single boot for just a one count.  “10″ fights back, but RUSH and Jose’s interference is too much for the Dark Order member to overcome.

There’s a desperation slingshot spear by “10” that cuts RUSH in half, and then he attempts his full nelson submission on Cassidy, but he reverses and nails Stundog Millionaire, and then gets RUSH in his signature tornado DDT.  Cassidy goes for the Orange Punch, but it’s countered by a pump kick from “10”.   He goes for the discus lariat, but Cassidy reverses into the Beach Break for a cover and José pulls him off. Cassidy stares him down, and that allows Danhausen to come up from behind and curse the Assistant, before hitting him right in the breadbasket.  RUSH shoves Cassidy and gets him in a belly-to-belly suplex.  But “10” is back in the fight with clotheslines to RUSH and a spinebuster, then he gets Cassidy in a slingshot wheelbarrow suplex and a discus lariat to cover for a two count.  RUSH grabs “10”, unlaces and turns around his mask, and stomps on him, as he flails blindly. Cassidy comes from behind and delivers the Orange Punch to RUSH to knock him out of the ring.  “10” goes after Cassidy, and he goes for Beach Break again, but it gets turned into a roll-up as “10” fumbles with his mask and the All-Atlantic champion has him pinned for the one, two, and three.

I’m channeling my inner Orange Cassidy and say this show was, “eh…whatever.”  It was solid, but nothing out of the ordinary.  Maybe I expected more since they were in Jacksonville, but…meh.