SmackDown: Bloodline and Logan Paul cap off above grade episode 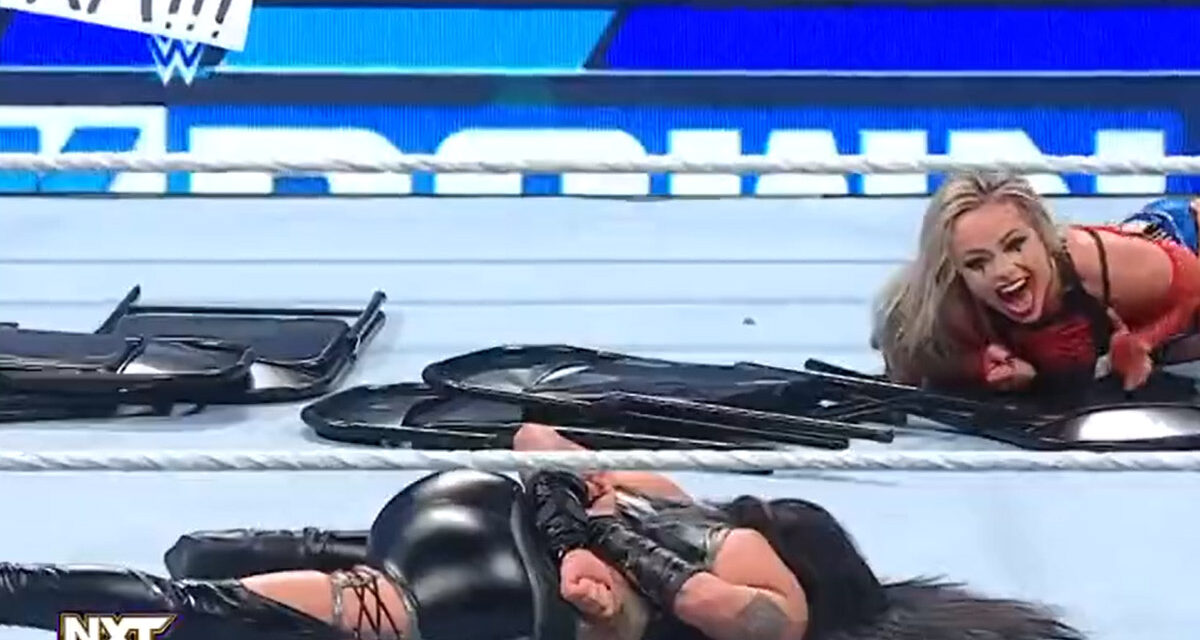 It’s a rare Friday night run for me, so this should be fun.

Cold open as the Brawling Brutes accompany Sheamus to the ring off the hop.

We get some Bray Wyatt distortion before the match gets going.

Sikoa gets a decent pop coming out, or at least the crew does.

Sheamus’ body is quickly looking like Picasso painting with all the different colors it’s turning. Sikoa’s blonde mullet isn’t as yellow as the bruises on Sheamo’s body, which says something.

This is, what a few podcasts would refer to, as an old-school HOSS fight and damned it if wasn’t good, despite the… oh what’s that thing I like to point out on Mondays… commercial break.

Sheamus at one point has quite the… um… leak from his nose. Colds aren’t something to take lightly. Trust me, I’m a parent.

Samoan Drop from the second rope doesn’t get the duke.

Sami gets up on the apron to distract from a pinfall before hell breaks loose outside the ring. Sheamus soon after hits a double Uce clothesline from the top rope to the outside. There’s a ginger on ginger violence spot before Solo hits the Revolving Rock Bottom and gets the V.

After the bell, the brutality continues. Sheamus is mangled before a chair party breaks out. Con-chair-tos a plenty to Sheamus’ left arm before this mafia-style beatdown ends.

Back from break, Giovanni Vinci and Ludwig Kaiser confront Rey Jr. back stage. Everyone’s wearing the wrestling fan’s favourite tee shirt colour – black. Despite the commonality, the two sides don’t agree. The end result is Kaiser vs. Mysterio for tonight.

Somewhere in the bowels of the arena, Bray Wyatt continues his monologue from last week. He confesses that there will be some brutality in his journey back through WWE. It’s certainly not the emotional Bray we got last week, and there’s definitely a more defined direction now.

Back at Chez Uce, it’s celebration time for Sikoa’s big win before conversation turns to Logan Paul, with debate on what the Bloodline will do.

Liv’s descent into Harley Quinn is continuing magnificently. Sonya, meanwhile, is really directionless and could really use to have a true extended time in NXT.

Deville’s offence only brings out smiles from Morgan, as we head into… say it with me now… a commercial break. PACING!

Back from the break, Morgan gets the advantage with a sweet strike run. Deville reverses but can’t get the duke. Morgan continues the crazy and it’s going brilliantly well, particularly with help from Michael Cole and Wade Barrett on commentary. The crazy leads to a double count out, which doesn’t get a favourable reaction from the assembled masses.

After the bell, Morgan finds unused chairs and piles them up in the ring. The crowd calls for tables, but nuh uh, Liv’s not having it. Superplex onto the chairs looks beautiful, unlike the dude cosplaying as Randy Savage ringside.

We get a great compilation of L.A. Knight going into break. YEAH!

Back from break, we get a video of Erik and Sarah Logan suiting up.

Face-to-face time between monsters. First, though, MVP reps Omos before the big guy comes out to meet Braun Strowman. The end result is the two meeting at Crown Jewel. Omos gets the first big shot as he pushes Strowman straight out of the ring.

Backstage, Drew McIntyre talks with Kayla Braxton. We find out McIntyre will face Karrion Kross inside a steel cage at Crown Jewel.

Outside the arena, Logan Paul arrives.

The match has very strong action, but, guess what happens…

If you said, “commercial break!” give yourself a gold star. That’s three of four matches so far tonight.

Rodriguez gets the hot tag and looks impressive, but she needs a heel turn in the worst way. Sky and Kai look incredible.

Tandem Sliced Bread No. 2 should’ve given the faces the duke, but Kai slipped out of a powerbomb attempt and broke up the cover in a VERY smooth spot. Kai takes Rodriguez out of the ring, allowing for Sky to finish the match.

Backstage, Braxton chats with Ronda Rousey. Rousey goes full-out heel in this promo and says there will be an open-challenge opportunity next week on SmackDown.

An Uncle Howdy distortion breaks up some commentary.

A Legado Del Fantasma promo airs next, promising the all-out destruction of Hit Row. HR was watching, however, and B-Fab alludes to having something up her sleeve… despite wearing a top with no sleeves…

Kaiser is a lot better than he gets credit for. These two work extremely well together and the match works quite well despite Imperium’s presence overall.

And guess what we get mid-match? Yep… commercial break. That’s four!

Mysterio and Kaiser continue to have a strong match, which is broken up by Mysterio going for the cheap heat “homage” to Eddy Guerrero. Seriously. It’s enough.

And… just for kicks, Mysterio goes full-0ut Cheat 2 Win with a feigned chair attack, resulting in GUNTHER and Vinci getting tossed. Kaiser nearly gets the duke soon after though.

Logan Paul is out to close the show and delivers a decent promo until Jey Uso attacks. Sami runs out and tries to talk Uce to Uce. Jey feigns getting out and ends up eating a KO punch from Paul.

Overall, this edition of SmackDown was above grade, but the pacing of the matches still needs work. hopefully this will improve in the coming weeks.