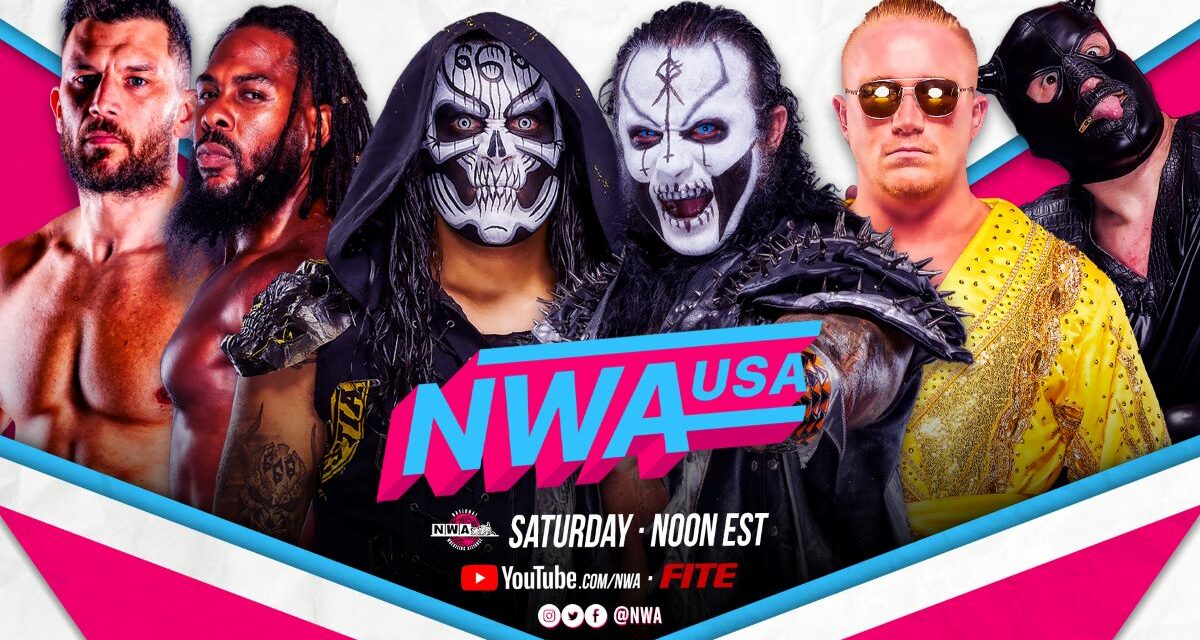 Ever since Tyrus cashed in the NWA Television title for a shot at the Ten Pounds of Gold, that left a vacancy. In the main event of NWA USA, AJ Cazana and Jordan Clearwater will battle it out to earn the belt. Will it be The Legacy of The Country Gentleman that gets the gold, or is it destined to be The Golden Boy of IdolMania Sports Entertainment?

We’ll find out as we head to the Skyways Studio in Nashville, TN. Joe Galli, Tim Storm, and Velvet Sky have the call as we go to a non-title matchup between… 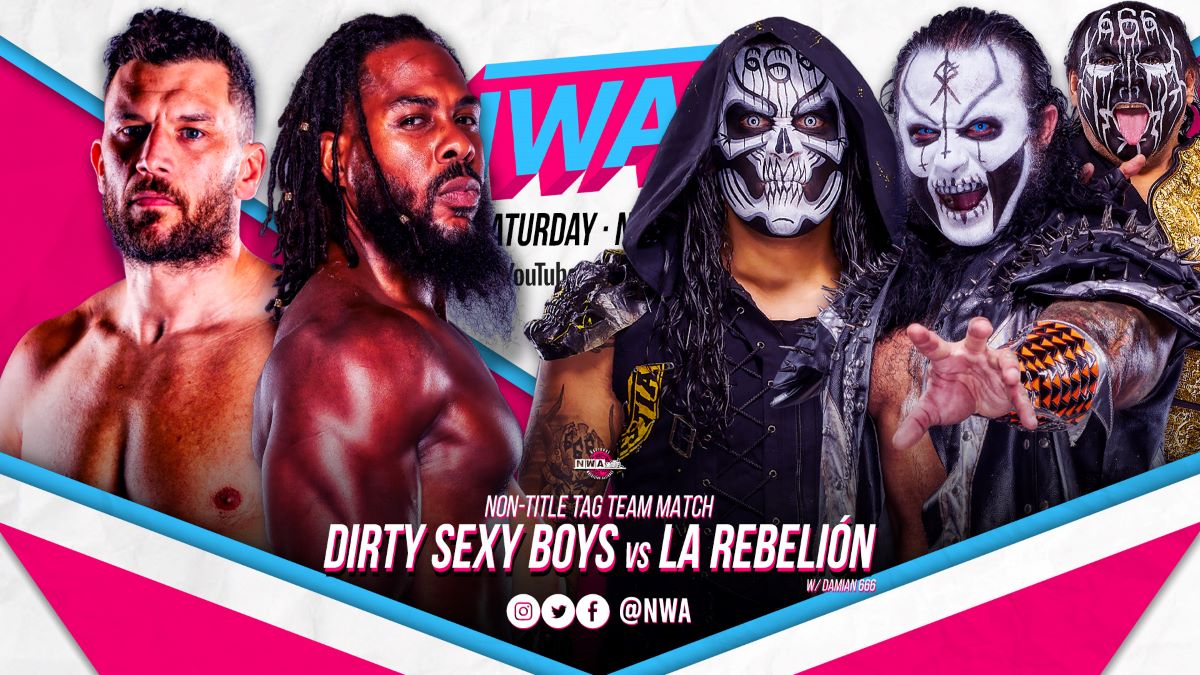 Dango and ‘Wolf start howling away, but then The Dirty One gets momentum early on.  The Dirty Sexy Boys are able to double-team Bestia once he tags in, and then JTG picks up the pace with a knee strike into a neckbreaker.  As he climbs up the top turnbuckle, Damian distracts JTG long enough for Bestia to kick him off the ropes.  ‘Wolf and Damian work him over on the outside, and as they send JTG’s body back in the ring, Bestia covers for a near fall.  From there, it’s all La Rebelión and JTG is a Sexy Boy in Peril.  ‘Wolf throws shade at Dango, and JTG uses the time to fight out of La Rebelion’s corner to crawl to his side for the hot tag and this results in a Dango en Fuego.  He sends ‘Wolf out of the ring, and Bestia attempts with a backslide but Dango reverses to a falcon arrow.  He goes up top for a leg drop, but Damian hits the mist on both Dirty Sexy Boys to blind them, and Bestia gets a muscle buster for the three count.

Your Winners via Pinfall:  La Rebelion

The Skyways Studios rains down chants of “You guys cheated!” as La Rebelion looks pleased with their efforts.

Earlier today, Galli had a closed-set interview with Tyrus. He notes that he elevated the NWA Television title and inquired about his thoughts on the tournament to crown a new TV champ. Tyrus says it’s a difficult kind of joy with Clearwater is going for the belt, but notes that through working with him he’s learning from Tyrus’ mistakes and expects nothing but “golden expectations.” Galli goes back to NWA 74 when he lost the match against Trevor Murdoch, and notes that a member of his audience, Ming (or “Grampa” as Tyrus’ kids call him) said something to Tyrus.  He recounted that Ming said, “Sometimes, you have to remember where you came from.”  Tyrus says nine times out of ten, he can beat Trevor Murdoch, and that night he concedes he got his one time.  This time at Hard Times 3, he won’t breathe after he’s done.

May Valentine is backstage with Marshe Rockett and BLK Jeez. Rockett is excited for his tag partner in the finals of the NWA Television title tournament, and says it’s “pure gold, all day.” Jeez says Tyrus will walk out as NWA World champ and will hold the Ten Pounds of Gold. 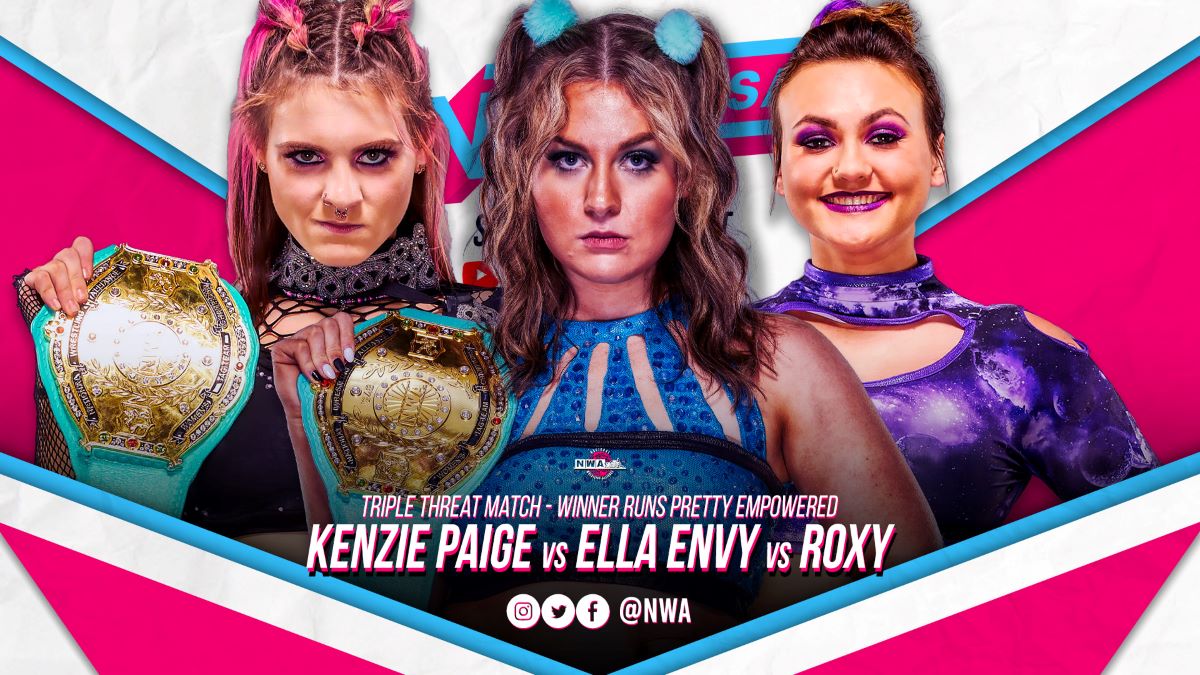 This match is to decide who will be the leader of Pretty Empowered going into Hard Times 3.  Again, I say, “Show me what you got.”

Envy and Paige circle Roxy and tell her to lie down, and they just go full Mean Girl on Roxy.  They both pin her, and they make the count to three and tell the ref to raise their hands, but he says it counts when he starts the match, and not before.  From there, it’s just slapstick comedy, as Paige accidentally slaps Envy while trying to pick up Roxy, and it’s just Empowered Going Wild™ in the ring.

(Author’s Note: Ever seen a girl fight so bad that it resembles two raccoons going to battle in a trash can fighting for that last stale bagel?  I have, but enough about Provo, UT.)

Fast forward here, Paige throws Envy out of the ring and makes Roxy lie down for the pin.

Your Winner via Pinfall:  Kenzie Paige

Your Losers by Confusion:  Everyone Watching (me, included)

If nothing else, I’m using this for my friends when they’re at a loss for why their daughters behave the way they do, just to prove that it’s not their bad parenting skills.

Valentine is with the NWA World Heavyweight Champion Trevor Murdoch on his thoughts on the upcoming three-way at Hard Times 3.   Murdoch says it’s his job to take on the biggest and baddest the NWA offers, and he is aware he could lose his belt without being pinned.  But Murdoch assures us that they can throw a whole army at him and it won’t matter because he will still hold theTen Pounds of Gold, and promises both Tyrus and Matt Cardona they will go to war.

There is a clip of the match between Matt Taven and Trevor Murdoch from this last NWA Powerrr but read it here if you missed it.

Kyle Davis at the NWA Control Center, and announces that since Chelsea Green won a title shot from Angelina Love on this past Powerrr, she will be facing both Kamille and KiLynn King in a triple threat match for The Burke at Hard Times 3. Also, MLW Openweight champion Davey Richards will return to the PPV to face Colby Corino. Finally, Velvet After Dark will be coming up as a PowerrrSurge episode.

Speaking of things getting kinky here’s… 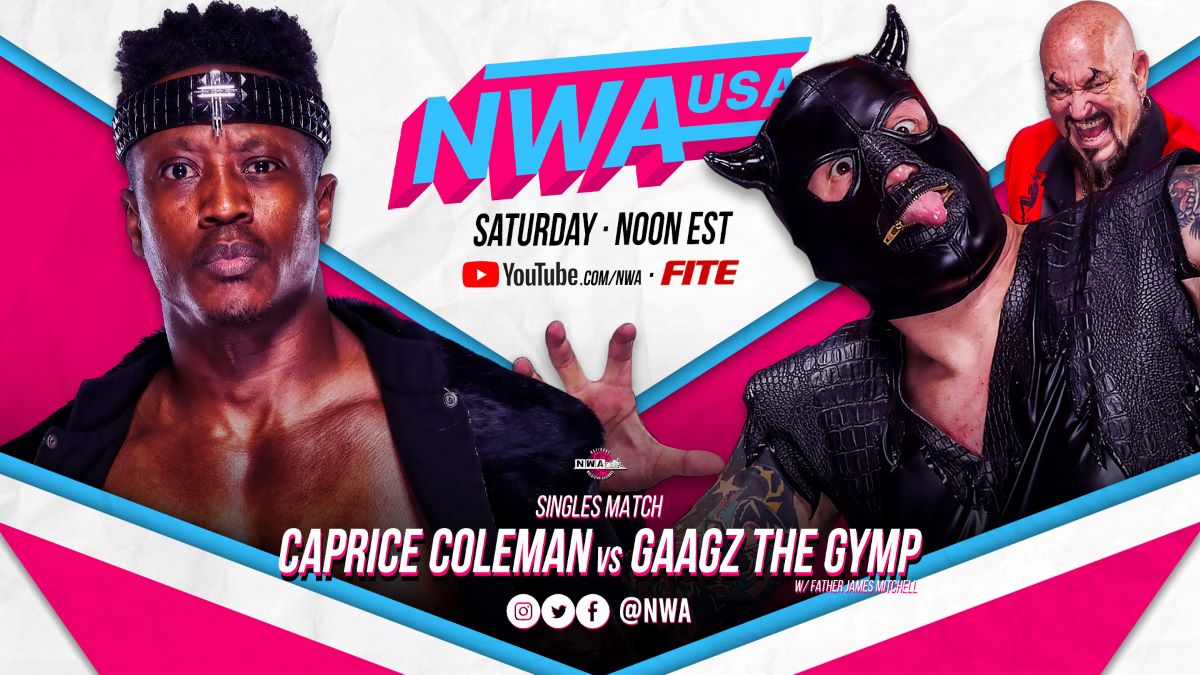 Gymp is really acting weird at the start of the match (and that’s saying a lot) trying to get in Coleman’s head (think old school “Goldust” antics) but The Ageless One manages to get past and overpower him.  A scoop slam to Gymp, and Coleman hits the ropes but the Minister grabs boots to trip him up.  As Coleman takes his eyes off the ball, that’s enough for Gymp to take advantage and Gymp-A-Mania™ is running wild.  Coleman attempts a comeback with chops and another slam to the mat, and then attempts a leg drop but misses the mark.  Gymp tries an elbow drop, then a leg drop of his own, and then a diving head butt, but he whiffs it all three times.   Coleman whips him to the corner, and as he rushes at him, Gymp unzips the mask to stick out his tongue to distract him, but Coleman still manages to fight back and nail two-thirds of The Trinity.  But Gymp takes a shortcut and uses the horn of his mask to jab Coleman in the eye, and gets a Gymp Drop for the win.

Valentine with Billy Corgan, who announces he changed the card of Hard Times 3 because he’s tired of the politicking by Tyrus and Matt Cardona.  So, instead of the three-way for the Ten Pounds of Gold, he will grant Rolando Freeman a title shot versus Trevor Murdoch.

Nah, he’s just kidding (and don’t tell me none of you had a collective heart attack just now)!

But seriously, he sells the main event for the PPV as the biggest thing to go down for the NWA, and he’s probably right.  Although, I am curious how much Rolando Freeman will play into this.

But let’s head ringside for the Main Event for the… 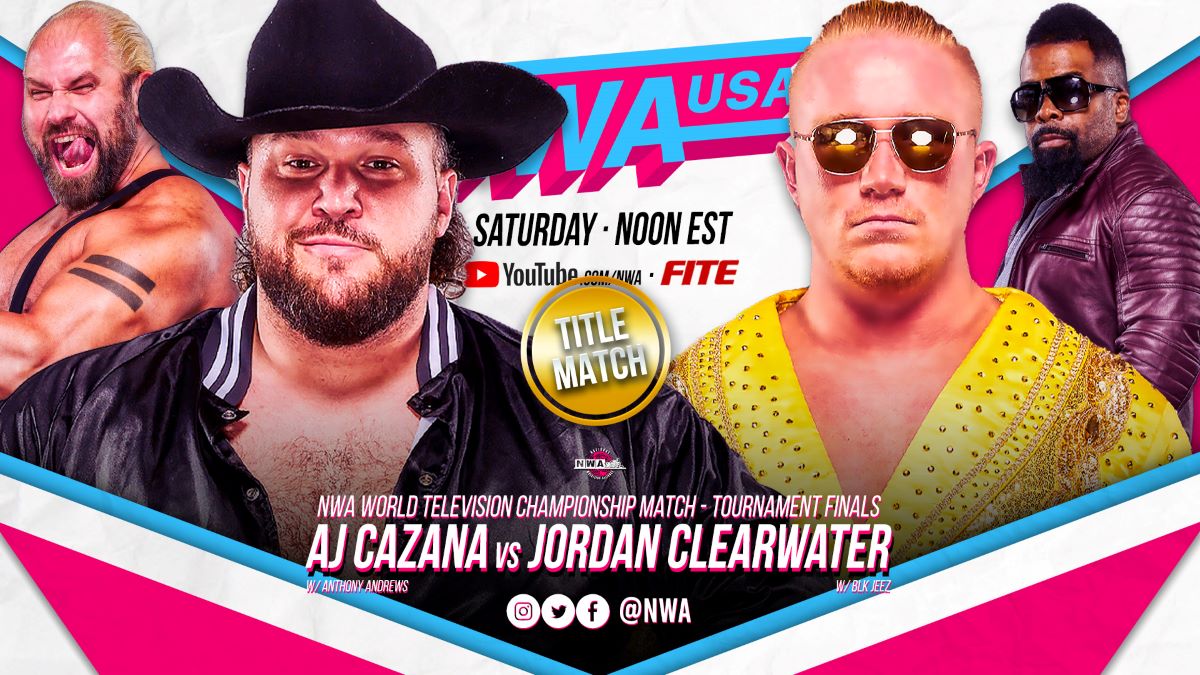 Clearwater jaw-jacks at Cazana, who looks at him bemusedly.  He then spits on Cazana, and he just knocks him out before the match starts, and Jeez tries to check on his man.  Cazana is hot and wants another piece of the Golden Boy, but Jeez tries to block, and the ref calls the bell to declare a no-contest.

The fans and Cazana are up in arms over the decision, but then Kyle Davis gets on the mic and announces the match will continue for five minutes more, and I’m all up for a redo.  As the bell rings, Cazana runs roughshod through a still-dazed Clearwater.  He gets him in a fireman’s carry, but Clearwater gets out and shoves Cazana hard into the top turnbuckle, hurting Cazana’s shoulder.  Now, Clearwater is vicious in his attacks as he focuses on his bad shoulder, and then he rakes his eyes and gets an elbow to Cazana’s face to cover for a two count.  Clearwater chokes him in the corner with the boot, and covers for another two count.  As Davis announces one minute left in the match, both men slug it out. Clearwater winds up for his Midas Touch finisher, but Cazana reverses to a German suplex.  They go back to blows and then drop to the mat with each man draping an arm on the other, but the bell rings and the time expires. so, officially, this  can be declared a…

Clearwater raises his hands in victory like he won, but Cazana shouts, “This ain’t over!” as the show goes to the credits.

I am not a big fan of no-contest finishes for the main event.  But, for the NWA Television title, this is keeping with the belt’s lineage and history, so it works for me.  Also, Cazana and Clearwater have stepped up their respective games, and I would love to see when their rematch takes place.