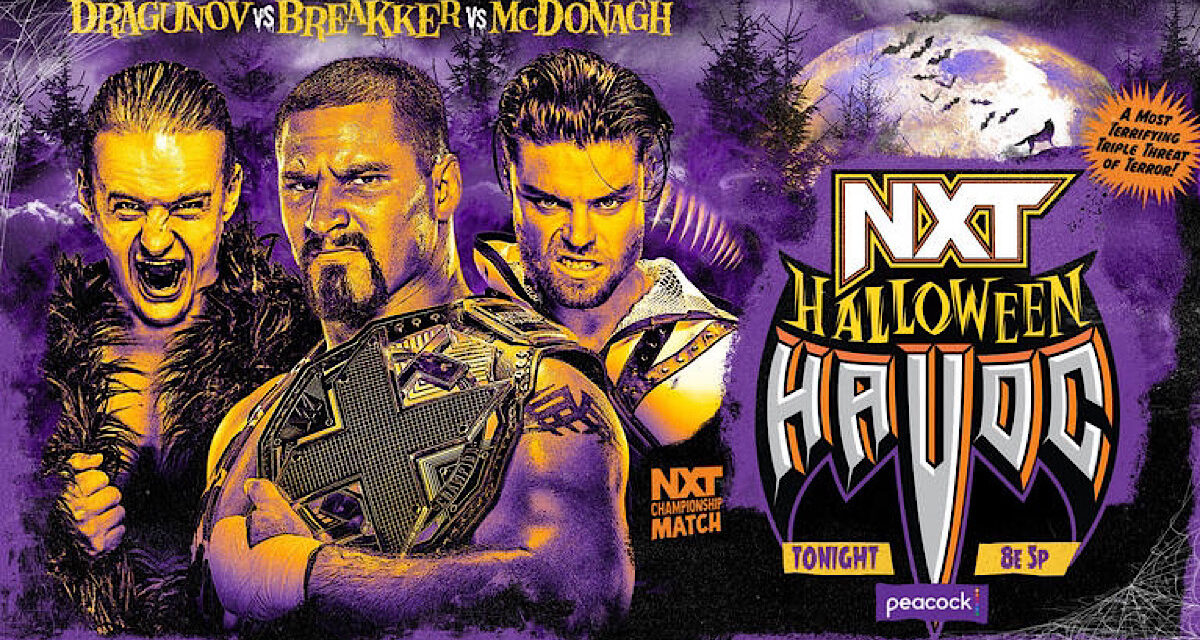 Chucky is featured in the opening video package for some festive corporate synergy, but Shotzi and Quincy Elliot are the official co-hosts for tonight’s Halloween Havoc. Full of stipulation matches, bitter rivalries, and holiday spirit, NXT continues its yearly tradition – again, spearheading a new era for the white-and-gold brand.

Trick Williams introduces the star of the five in another special entrance – former champion Hayes, but it’s anybody’s game as Booker T aptly comments, “You know what unpredictable means: not able to be predicted.” Ladders are introduced early in a demolition derby with equal moments for each competitor to shine. Frazer incites a “holy sh-” chant with a reverse Spanish Fly on Hayes to the steel, but Mensah capitalizes with everybody down. Williams tips the ladder, sending Mensah into the mass, but Mr. Stone attempts to grab the strap for Wagner before getting dumped as well. Wagner almost takes out a fan when constructing a ladder bridge, but karma strikes when Frazer Frog Splashes him through the rungs. He recuperates and tosses Lee from the ring to the announce desk in an insane bump, and Mensah and Frazer battle atop the rungs thereafter.

Hayes removes the opposition and scales the ladder alone until Lee is revived for the halt. The latter delivers a Meteora onto a bridged ladder, climbs to the top, and unlatches the belt to a great reaction. “You deserve it chants” are directed towards Lee, the new North American Champion in an awesome opener. NXT multi-man ladder matches are guaranteed to deliver, especially in front of a hot crowd like tonight’s.

Alba Fyre goads NXT Women’s Champion Mandy Rose into a cemetery, and cinematic cameras follow Toxic Attraction like a lowbrow movie rather than a match. The three banter inside a haunted house before splitting up, where Jacy Jayne gets kidnapped by the challenger. Fyre brawls with Gigi Dolin and stuffs her away, finally meeting with the champion thereafter. She strikes Toxic Attraction with her baseball bat and drops a cliche one-liner before driving victoriously into the night with Rose inside.

Druids carry a casket ringside as a result of “spin the wheel, make the deal,” climaxing a rivalry containing superhero visions and bloody eyeballs. Commentary notes Crews’ motivation for returning to NXT as “unfinished business,” but it’s instead been a weird character change that involves aforementioned powers and sinister vignettes. Booker T accuses Vic Joseph of being an accomplice when Waller gains the upper hand by weaponizing the latter’s pen. He continues attacking his opponent’s eyeballs, sending Crews through the wooden casket before the lights go out.

Petty technicalities let the match ensue as druids follow a revived Crews with another casket. He eventually pushes Waller in, unable to close the lid before exchanging strikes atop the bed of velvet. Waller hits his beautiful rolling stunner and attempts the second, but Crews reverses with a slam into the casket, closing the lid for the victory.

Perez uses a skateboard to swat away weapons and push Jade to the floor before introducing a table. The latter turns the tide with a spray bottle, but Perez comes back with rope whips and a big stick. They brawl atop the ringside podium – “what the hell?” says Booker T, and Perez hesitates to knock her former friend off. They simultaneously drop through two tables, and Perez hits Pop Rox onto a mass of chairs for the three-count victory.

Co-host Shotzi enters the ring, and “Super Diva” Quincy Elliot follows as a giant banana. But out comes Lash Legend to complain about not fulfilling the host position, and a DDT from Shotzi is thrown her way. “Worldstar!” shouts Elliot.

The Schism cuts a spooky promo about unveiling the mask of society, revealing that the hooded figure they’ve been mentoring will unmask on Tuesday.

A brief history of Diamond Mine precedes the match, highlighting one of the few success stories of NXT 2.0. The ambulance is stationed by the garage opening, and Kemp saves himself by jamming a crutch between the doors. Creed flushes his opponent out with a fire extinguisher, where if the former loses, brother Brutus Creed is forced out of the promotion. He fights out of the ambulance but is driven into the steel steps by Kemp with a Uranage, although Creed traps the latter into a wheelchair for battering purposes. They throw objects at one another and migrate to the ambulance once again, where Creed sacrifices his hands to avoid defeat. He poetically uses the same chair that Kemp used weeks before and powerbombs him through a gurney before finally carrying him into the ambulance for victory.

The ambulance exits and an SUV enters with Fyre and Rose inside. They enter the ring and the bell officially rings, where Rose takes over the majority of the match. Fyre comes back with a Swanton but Jacy Jayne and Gigi Dolin of Toxic Attraction pull the referee out. The challenger hits the Gory Bomb without a conscious referee, but the numbers are too strong, allowing Rose to connect with a running knee for three. Therefore, Rose approaches a year as NXT Women’s Champion, which is mainly a statement of how shallow this roster is for a viable replacement.

Nikkita Lyons and Zoey Stark are interviewed about their match for the NXT Women’s Tag Team Championships, and fellow challengers Edris Enofe and Malik Blade cheer them on.

Franchise player Breakker is the obvious favorite, but Dragunov is definitely a sleeper pick. “Mc-Don’t-google-me,” who was verbally obliterated by Kevin Owens on the go-home show, takes early control as the understandably overlooked challenger. Breakker briskly throws the opposition around, but Dragunov fights back with intense strikes and a big Coast-to-Coast. McDonagh applauds Breakker and Dragunov’s striking exchange but is inevitably caught in the middle until being thrown over the ropes. All three men are floored with “NXT” chants in the background, and afterwards, Breakker Frankensteiners McDonagh into a powerbomb from Dragunov.

The competitors continue to exchange offensive maneuvers as McDonagh is bestowed the highest honor of entering Booker T’s “fave five.” But he’s unable to capitalize off of Breakker’s finishing slam on Dragunov, and the latter connects with a senton and Torpedo Moskau on the champion. McDonagh catches the referee’s hand before the three-count but receives a Torpedo Moskau ringside to be knocked from the equation. Dragunov attempts one more finishing maneuver, but Breakker reverses with a brutal spear to retain his championship in an extremely well put together main-event match.

I was initially sour on this event because of the corny dark elements like the casket match and haunted house segment, but the main event was so amazing that it turned it right around. The ladder match and ambulance match were great as well, but most matches could’ve benefited from being cut a little shorter. Otherwise, the young wrestlers of NXT continue to prove that they’re worth putting stock into.