The Territories anthology is ‘wild, unruly, and a little unhinged’ 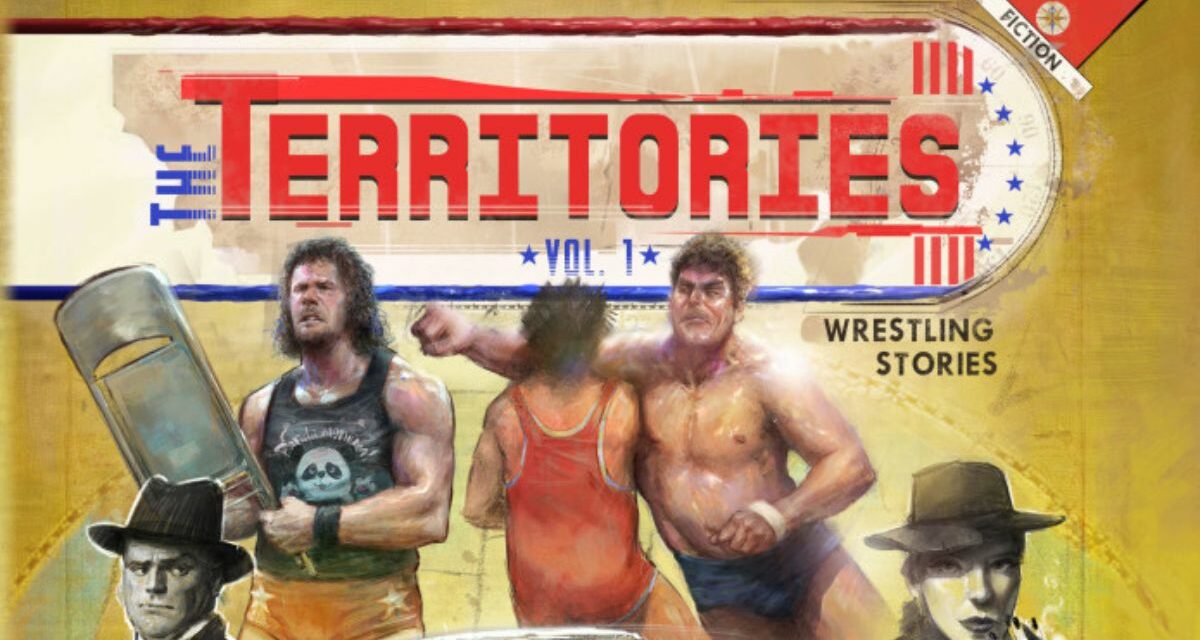 The Territories: Volume One, co-edited by Chad Dundas and Jonathan Snowden is a shared world anthology set within the “recognizable yet fictional” territorial era of 1980s professional wrestling. The book contains ten works of fiction, written by ten different authors, including contributions by Dundas and Snowden, with each author grappling with a fictional wrestling territory, and the various wrestlers, promoters, and fans within.

The story of the book getting to press is interesting too. It’s published by Hybrid Shoot, which also did of Way of the Blade and Shamrock: The World’s Most Dangerous Man (written by Snowden). Funding for the book was made possible via Indiegogo, and readers can still visit Indiegogo to purchase The Territories as an ebook or hardcover. According to the publisher description of The Territories, “Set in a funhouse mirror of our own world, The Territories leaps into the madness of 1980s professional wrestling, presenting the business the way we liked it—wild, unruly and a little unhinged.” 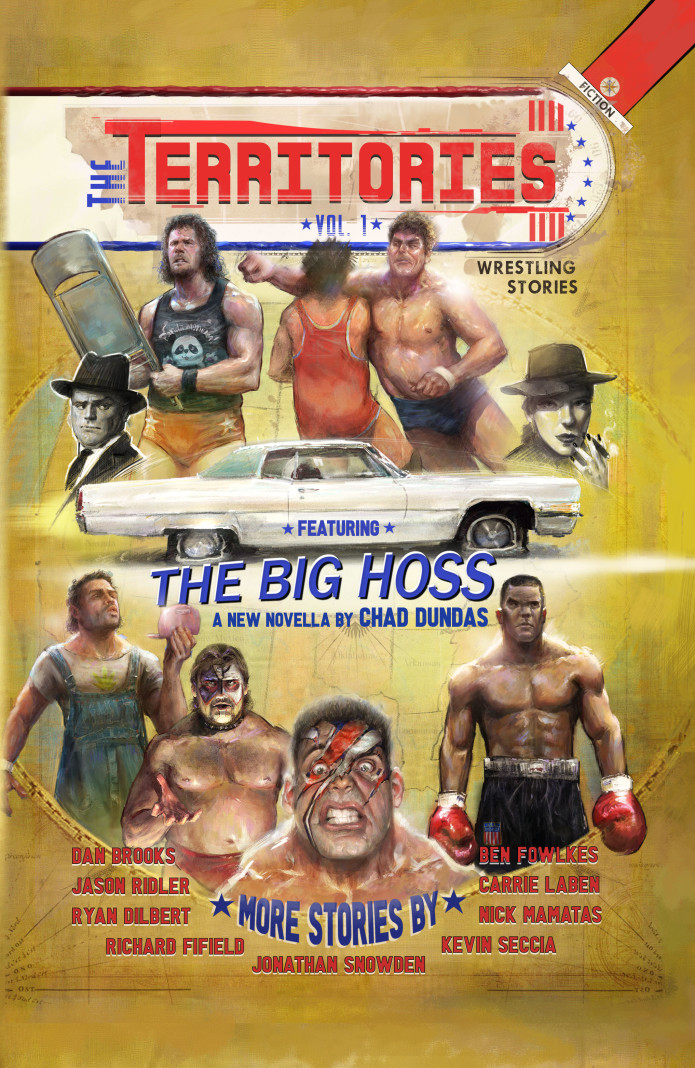 The cornerstone of The Territories is “The Big Hoss,” a novella by Chad Dundas, a 44 year-old podcaster, journalist, novelist, husband, and father of three from Missoula, Montana. Dundas wrote “The Big Hoss” before he and Snowden began collaborating on The Territories. Initially, Dundas thought “The Big Hoss” would just live on his computer for the rest of his life, and then he casually mentioned his story to Snowden, who told him about his idea for a shared universe set within the territories of wrestling, “like planets in a solar system,” and Dundas revised “The Big Hoss” to better fit within The Territories. But “The Big Hoss” isn’t Dundas’ first foray into writing about wrestling. Dundas previously wrote a short story titled “The Rightful King of Wrestling,” published in 2013 by Thuglit, a crime fiction magazine, which lead to the eventual publication of his first novel, Champion of the World, a work of historical fiction set in the world of 1920s professional wrestling, and which happens to be connected to The Territories. 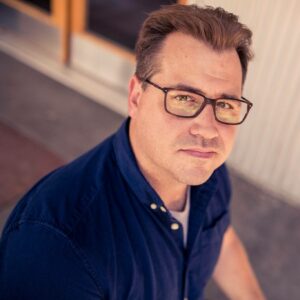 Chad Dundas, co-editor of The Territories

“The Big Hoss,” by Chad Dundas, fills the first third of this anthology, and serves as an excellent introduction to The Territories. In “The Big Hoss,” readers are introduced to our protagonist and narrator, “Real Deal” Dallas Hostettler, a six-foot-six, 275 pound “ox,” who’s been chosen to drive around, and tag with, “Maniac” Mack Savage, the heavyweight champion of Frontier States Wrestling. Hostettler is missing “experience and a better body,” while Savage is a “broken-down old mule,” so it’s a classic odd couple pairing, on steroids (literally). “The Big Hoss” is narrated from the perspective of an older, wiser Hostettler, nearly 40 years older, in fact, and the world that he describes feels fleshed out and lived in. Frontier States Wrestling, comprised of Alberta, Saskatchewan, Montana, Wyoming, and East Washington, is the first of 16 fictional territories written about in The Territories, and it is full of new characters, but Dundas does a great job introducing a cast of characters who, presumably, Hostettler’s fictional fans may already be familiar with, so he doesn’t patronize readers by providing too much information about every wrestler and promoter introduced.

After all, a wrestler who may only be a footnote in “The Big Hoss” may receive his or her own full treatment later on, either in volume one of The Territories, or collections yet to come. This anthology rewards close readers who pay attention to seemingly minor details and characters (hint: a belly scar described in “The Big Hoss” returns in another story), and really works to validate the quote by seminal Russian acting teacher Konstantin Stanislavski: “There are no small parts, only small actors.”

Every story in The Territories is enjoyable in its own way, and there’s enough variety that each reader will have their favorites, but in addition to Dundas’ novella, some personal favorites are “Iblis, Come To Me,” Nick Mamatas’ story of Satanic Panic fueled fanaticism; “Take Notes, Meatloaf,” by Richard Fifield, which focuses on a wrestler-turn-actor living and rehearsing in pre-riot 1992 Los Angeles; “The Job” by Jason S. Ridler, a concise story about an idiosyncratic vagrant/jobber with an unnatural tolerance for injury; and Ben Fowlkes’ “Doomsday, Destroyer of Worlds,” which sufficiently concludes volume one of The Territories by telling the tale of the short-lived Memphis tenure of Doomsday, a face-painted, “six and a half-foot steroid monster” who’s more famous for nonsensical promos and injuring in-ring opponents than his “work rate.”

With multiple authors working within a shared literary world, Dundas stated that continuity was the biggest obstacle he and Snowden faced in creating The Territories, so they created a “story bible” which described the “luminaries” of this world and outlined the history of all 16 territories. After contributors expressed interest in writing for The Territories, Dundas and Snowden shared “the bible” with their authors, so they could use it for inspiration or reference while writing their stories, and if readers are interested and want to read “71 pages of background material breathing life into this strange new world,” they can download The Territories: The Bible for free on Gumroad.

For volume one, Dundas and Snowden contacted writers with whom they had established relationships and were close to their hearts, including former graduate school colleagues,  but for volume two, Dundas said they “spread their wings” to invite new contributors. One of the many great things about The Territories is that co-editors Dundas and Snowden have merely scratched the surface of this shared universe, so as long as they keep finding qualified authors who want to write about fictional territorial wrestling, we can hope that readers will be rewarded with many more volumes of The Territories.

Finally, I think it’s important to acknowledge the artist for The Territories: Volume One. Marco Bucci fills the cover with vivid illustrations of some of the wrestlers who make their anthology debut, such as “Maniac” Mack Savage, the face-painted Doomsday, “Dungeon Master” Demian Rex, and Ronnie “Brick Wall” Brooks. Additional art is viewable online, where you can see renderings of trading card versions of Doomsday, Rex, and Brooks. One can hope that Bucci will continue to be the artist for subsequent volumes, and I can’t help but speculate that actual printed trading cards of these and other wrestlers from The Territories would be a fun and collectible bonus. 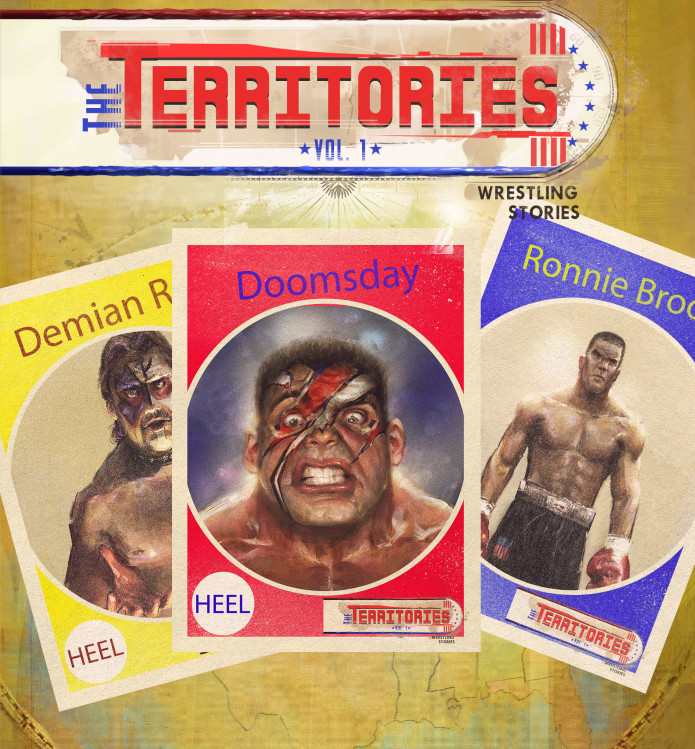 Dundas has confirmed that he and Snowden are hard at work on volume two of The Territories, which should be available to purchase by the end of 2022, and that Hybrid Shoot will publish this second collection, as well. Dundas is wrapping-up his story for The Territories: Volume Two, as well as the draft for his third novel, and he currently co-hosts the podcasts Death in the West and Co-Main Event.

The Territories: Volume One (Hybrid Shoot), edited by Chad Dundas and Jonathan Snowden, is available as an ebook or hardcover on Indiegogo, Gumroad, and Amazon. For more details, visit the website for the book.