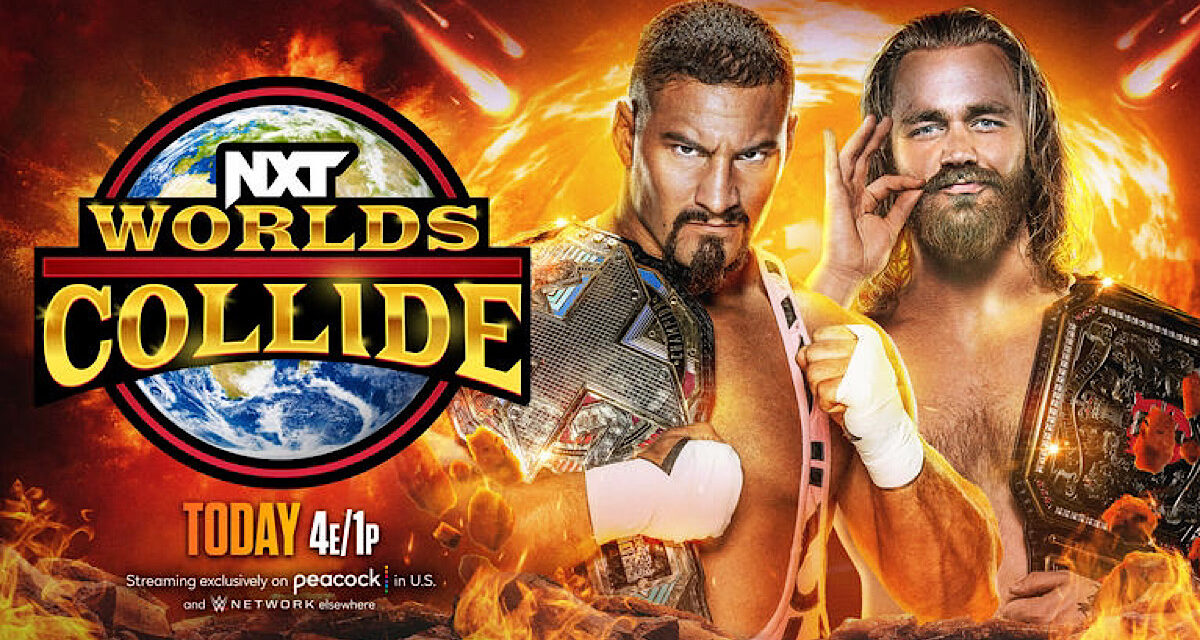 Young wrestling standouts Bron Breakker, 24, and Tyler Bate, 25, main-evented tonight’s NXT special to unify the NXT and NXT UK Championships. A storied brand’s fate resting on the shoulders of Bate, worlds collided at the Performance Center in Orlando, Florida, but only one survived.

Hayes’ titantron features every challenger that he’s “put on a t-shirt,” and a defense against Ricochet will solidify him as the lineage’s best. Orlando is hot for the anticipatedly athletic reversals and crisp maneuvers, and everybody rises when the competitors collide in midair. Trick Williams interferes with a count at ringside but receives a slick boot from Ricochet before Hayes capitalizes with agile offense. The champion scales the ropes, but Ricochet recuperates with an impactful superplex preceding an exchange of flashy strikes. Ricochet takes out Williams once more and attempts a Shooting Star Press, but Hayes rolls him up for the sneaky pinfall victory in an exciting opener. Both brought the intensity, and the catchphrase “Melo don’t miss” continues to ring true.

The NXT parking lot strikes again as Roderick Strong is found bloody on the concrete. He’s sent away in an ambulance as Diamond Mine watches on.

A brawl starts before the bell, and NXT UK Tag Team Champion Briggs and NXT Tag Team Champion Julius Creed begin the match. Corner women Fallon Henley and Lash Legend get into a scuffle, and a series of outside dives commence thereafter until Wolfgang of Gallus gives Brutus Creed a superplex. Wolfgang and Mark Coffey connect with a double team on Jensen, officially eliminating the NXT UK Tag Team Champions from the match and turning their attention to Pretty Deadly. The Creed Brothers tag in with an assisted cannonball to eliminate Gallus as commentator Wade Barrett insinuates that it was Julius that attacked Strong. But nevertheless, Kit Wilson and Elton Prince take control over Brutus until Julius makes the comeback as the eliminated teams continue brawling ringside – taking out the referee in the process. Attempting a chair shot, Wilson is tackled by Diamond Mine’s Damon Kemp, who then shockingly strikes Julius with the steel. In a definite upset victory, Pretty Deadly claim both straps after a chaotic yet intriguing collision course of a match. As for Diamond Mine, diamonds evidently aren’t forever.

Tony D’Angelo and Channing “Stacks” Lorenzo discuss losing Legado del Fantasma when Cameron Grimes walks in. D’Angelo offers his biscotti, but Grimes is “not hungry.” That was an offer that Grimes probably should not have refused.

NXT UK Women’s Champion Satomura gets a traditional welcome of streamers, but NXT Womens’ Champion Rose gets the hero’s one. The competitors trade early pinfalls, and Davenport wrestles in-ring with Rose until Satomura swaps in for the latter. The monotonous pattern continues, and the third superplex of the night leads to Satormura’s string of dominant offense. Davenport separates a pin and connects with a knee strike for two, but Satomura recuperates with a unique break-up. Rose capitalizes and hits both opponents with a finishing knee, pinning Davenport to win the match. Rose’s reign of terror continues, but Wade Barrett and the other lovestruck fans of Orlando get their wish.

Wes Lee is interviewed backstage about Tuesday’s match against JD McDonagh. Lee describes his opponent as weird and uncomfortable, but he’s more so just weird.

The main roster challengers in Doudrop and A.S.H come across like charisma vacuums in comparison to the party-going champions, whose tandem agility outclasses their seniors. Commentary says “the winds have been taken out of their sails” when describing the quietness of the crowd during the challengers’ offense, but Carter finally makes the comeback. Her momentum is stifled too before Jacy Jayne and Gigi Dolin of Toxic Attraction interfere, but the match continues anyway. Carter and Chance hit their double-team finisher for a convoluted win as if Doudrop and A.S.H were too significant to take a clean loss.

Grayson Waller rejects the outreach of The Dyad before being interviewed about Apollo Crews’ injured eyeball. Meanwhile, a hooded figure accepts a smiley pin of the background cult as Waller runs his mouth, which nobody in NXT does better.

Bate’s cinematic entrance highlights a wall of former NXT UK Champions: Pete Dunne, GUNTHER, and Ilja Dragunov, a lineage of classic matches and moments. Despite the outcome of tonight’s main event, which realistically doesn’t favor Bate, the short-lived yet storied brand comes to an end. Breakker boasts a size advantage, but the competitors are actually even in strength and agility as Bate wins the opening chain-wrestling sequence. Breakker eventually takes control with a hurricanrana and standing moonsault, but Bate recuperates with an outside dive. The NXT Champion halts another superplex attempt and powers out of two near falls – which include a smooth midair powerbomb reversal from Bate. The former hits a top-rope bulldog and Falcon Arrow for two before the competitors exchange blows, and “Big Strong Boi” gets ahead with an Airplane Spin and rebound clothesline. Bate’s insane strength is on display for the Tyler Driver 97, and Breakker kicks out to a huge reaction. The latter hits his finishing slam, but Bate reaches the ropes with Orlando by his side. A close near-fall later, Bate attempts another rebound clothesline but is obliterated by Breakker’s finishing spear to conclude the bout.

Bate grabs both belts and places them onto Breakker before embracing in a show of respect. Commentary closes the show with this line: “Weeks ago it was decided that there should be only one champion to represent NXT and this brand moving forward. That superstar is none other than Bron Breakker.”

Bron Breakker was clearly the right choice to carry the NXT flag, because alongside another shining young wrestler, he continues to improve as a main-event player. The brand showcased their outstanding talents in people like Hayes and the Creed Brothers, and when given the opportunity, NXT can still be a platform for great wrestling.