AEW Rampage: Daivari wants Cassidy to be a Trustbuster 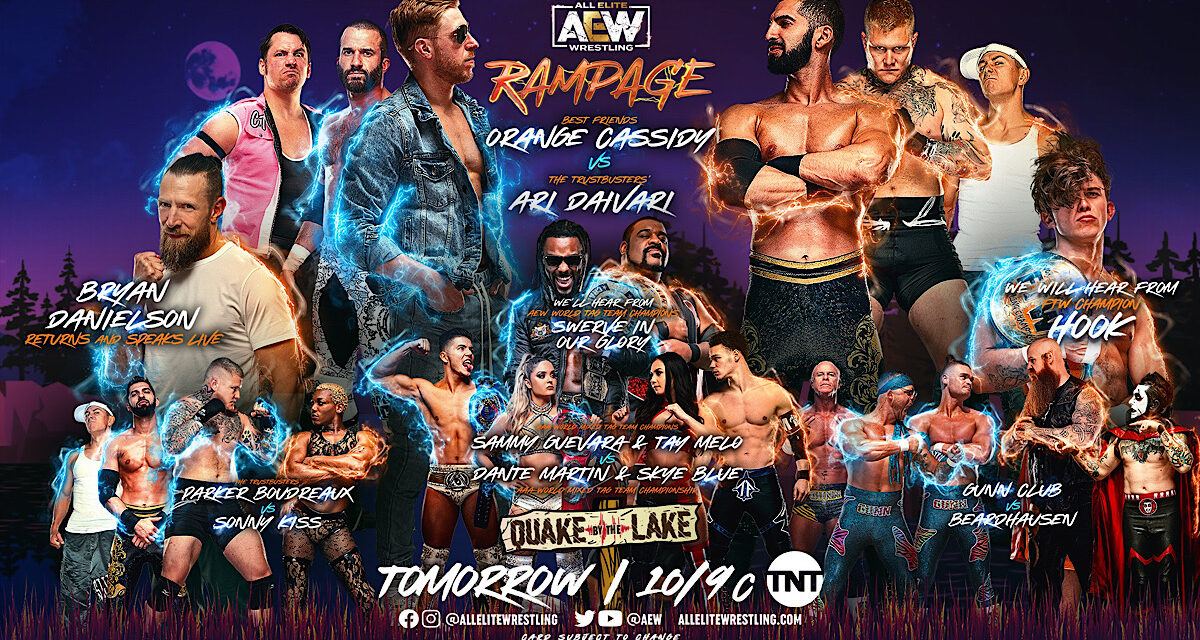 It’s Friday night, and You know what that means?  No, not to store nuclear plans in your basement (clean up, ya hoarder!), or to declare the Fifth 440 times (Pfft!  Big deal!  My record was 500…but enough about Catholic School).  It’s time for AEW Rampage, and tonight in the main event, Ari Daivari wants Orange Cassidy to either join him with The Truthbusters or gets his ass handed to him.  The Best Friends may have some thoughts on that before the Trios tournament, and we’ll find out later tonight.

We continue to Quake by the Lake from the Target Center in Minneapolis, MN. Excalibur, Tony Schiavone, and “Good Old JR” Jim Ross have the call, and we start with Schiavone in the ring with Bryan Danielson. He addresses the loss to Daniel Garcia on the last Rampage, where he proclaimed himself a Dragon Slayer.  The American Dragon replied to those words:

Daniel Garcia said when I get in the ring with him, he wants to slay the dragon and my career. Do you know what?  Somebody’s gonna have to damn end my career because I will not leave this room on my own! But my career will not end this Wednesday!”

García comes out from the back and claims Danielson was his hero, but he comes up with excuses for leaving and then coming back. It hurts him, and it makes Garcia want to hurt him too. Danielson replies that what annoys him is this sports entertainment bulls*** (Amen and Hallelujah!). He makes Garcia look him in the eye and asks if he wants to be the best technical sports entertainer or the best wrestler in the world, before walking off.  Garcia is stunned as Danielson leaves the ring, and you There areonder if his words reached him

There’s some recaps from this Wednesday’s AEW Dynamite (which you can read here if ya missed it), but let’s go to the First Match of the night and it’s for the…. 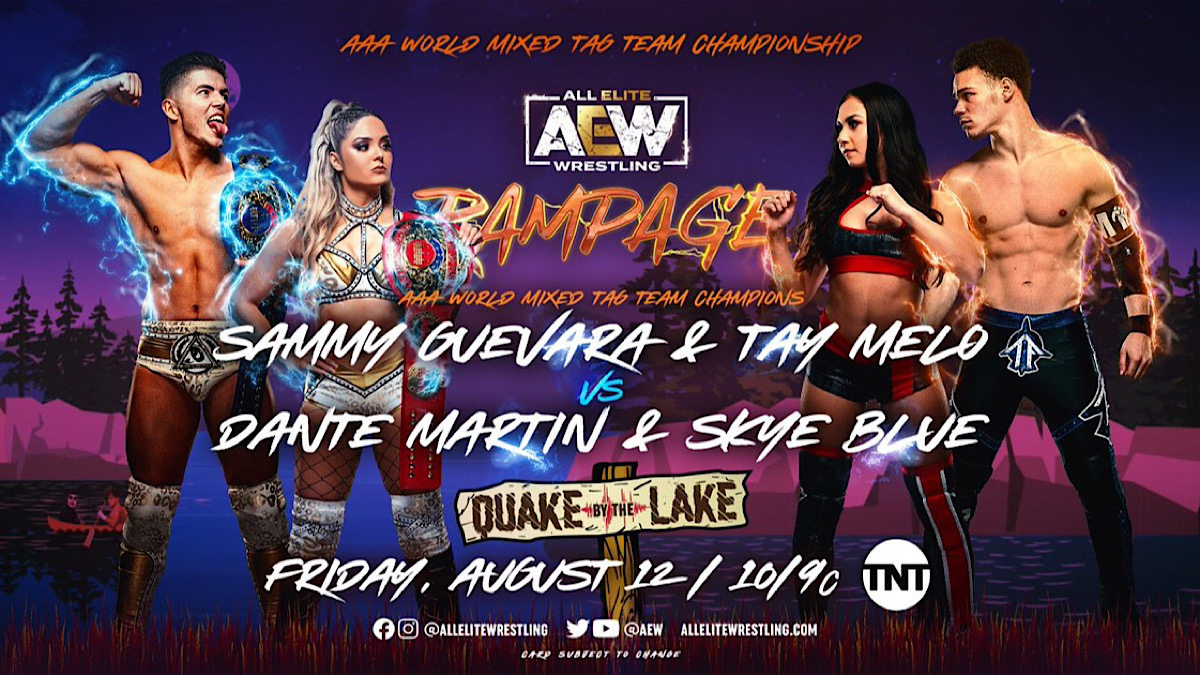 There’s a mention of Guevara and Conti’s recent nuptials, so good for them.  Lord knows the fans don’t care.  Guevara shoves off Martin, but Blue tees off on Melo and we’re off to the races with a Pier Four brawl.  Once the dust settles, Guevara tags to Melo so Martin leaves because only the same gender can face the other in the ring (Honestly, it’s like AAA cribbed WWE’s playbook).  Blue is in and she is twisted up into a submission but Blue gets out.  Guevara trips up Blue by ringside and with the distraction, Melo gets a big boot.  Melo is in control during Picture in Picture, and she goes for a big boot that Blue evades.  She rolls up Melo with a bridge to get a two count.  She gets the hot tag to Martin and he is a Top Flight with a dropkick that makes The Spanish God roll out.  Melo goes on the attack and he channels the Matrix and leaps away from her charge and she tackles her hubby on the outside,  Martin lands a tope suicida to Guevara on the outside, and then Martin steps on Melo’s back to land a Canadian destroyer on Guevara for a two count.  Blue tags herself in and gets a huracanrana to Guevara, but Melo gets a superkick and follows with a Tay-KO for the pin.

Your Winners via Pinfall:  Tay Melo and Sammy Guevara

The Lucha Bros talk about La Facción Ingobernables.  But once PAC joins them again, they will be unstoppable when they go for the AEW Trios chaBoudreaux belts.

You heard 'em they're coming back for gold #AEWRampage pic.twitter.com/w6dNQrdJH2

This is the first time we’ve seen Kiss on AEW TV Programming in a while.  However, this screams dark match, so it’s time for a Haiku Review as Kiss faces one half of The Trustbusters.

Your Winner via Pinfall:  Parker Boudreaux

Backstage with Lexy Nair with La Facción and Andrade and Rush address Private Party and The Butcher and the Blade.  Andrade gets in Private Party’s head to step up their game against Swerve in Our Glory, and to get to tag belts.  Kassidy gets in El Idolo’s face and says they’re up to the challenge.  I’m curious how the tag champs will respond.

Now for something different, it’s… 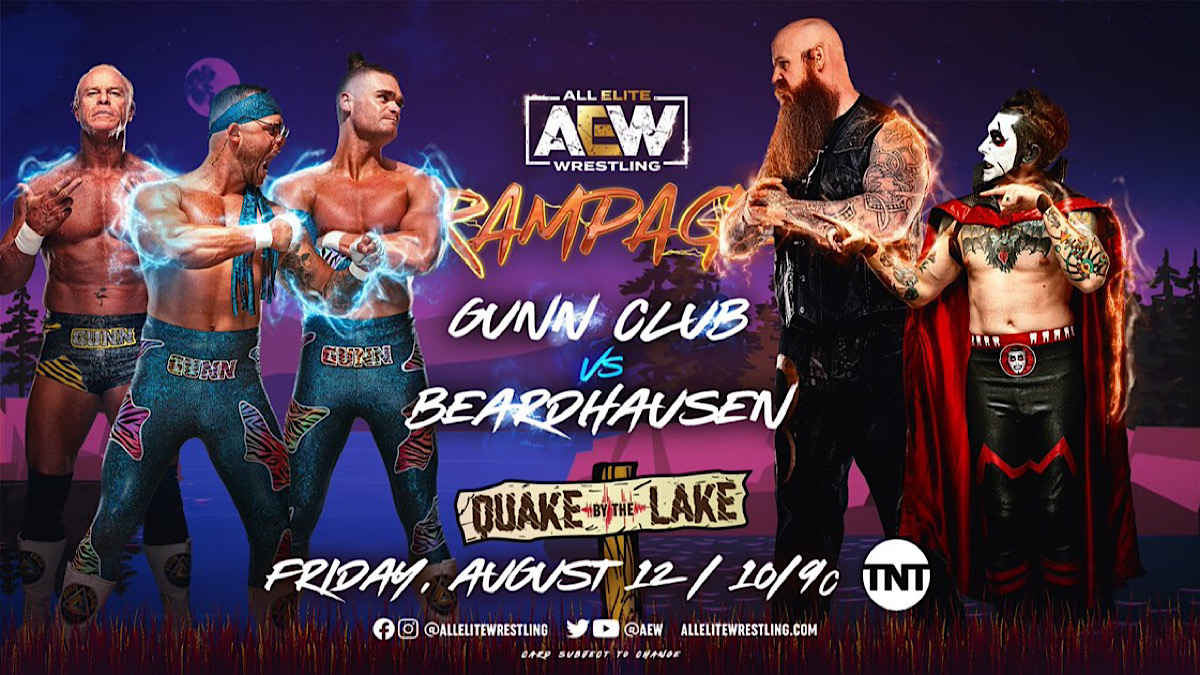 The Gunn Club vs. Erik Redbeard and Danhausen

Before you ask, “What in the name of the Wyatt Family is going on?!”, the fans immediately start in with chants of “A$$boys!” to taunt Austin and Colton further, Redbeard stands tall against the Club.  Once Danhausen is tagged in, he attempts to curse Austin, but he takes a stop to that and The Gunn Club take control and isolate the Very Nice, Very Evil wrestler in the corner.  Danhausen tries to fight out and get past Gunn control, (see what I did there?), and that leads to…

Ads (I should be annoyed by this.  I usually would be in I was invested in the match.  This is not that time.)

We come back fro  the break, and Danhausen gets the hot tag to the corner, and we gets a Redbeard En Fuego who cleans house.  The Guns are outside the ring, and he lands a running crossbody.  He throws Austin back in the ring and then gets a Brodie Lee-esque slingshot senton with a roundhouse kick for a two count.  The Gunn Club stun the big mand and a double suplex, but Readbeard reverses the move.  Now Danhausen gets the tag in to the ring and sets up a double-team move.  Redbeard hits the ropes, but Daddy Billy pulls them down to make the big man go tumbling to the outside.  Austin delivers a Fameasser to Danhausen to cover for the win.

Your Winners Via Pinfall:  The Gunn Club

As the Gunn Club celebrates, Billy is in the ring and berates his sons, saying they should have done better.  He also wishes that he didn’t turn on The Acclaimed (ouch!) but they have a chance to prove themselves next week on AEW Dynamite. As the Gunn Club head to the back, Stokely Hathaway is ringside to pass his card along. Another acquisition, perhaps?

Lexi Nair is with the tag team champions Swerve in our Glory.  She inquires about the challenge from Private Party, and Lee laughs and says they can’t match up.  Swerve cannot add up how they’re in the top five 9since he’s bad at math, by his own admission) but it doesn’t matter since next week they will enter (whose house?) Swerve’s house. 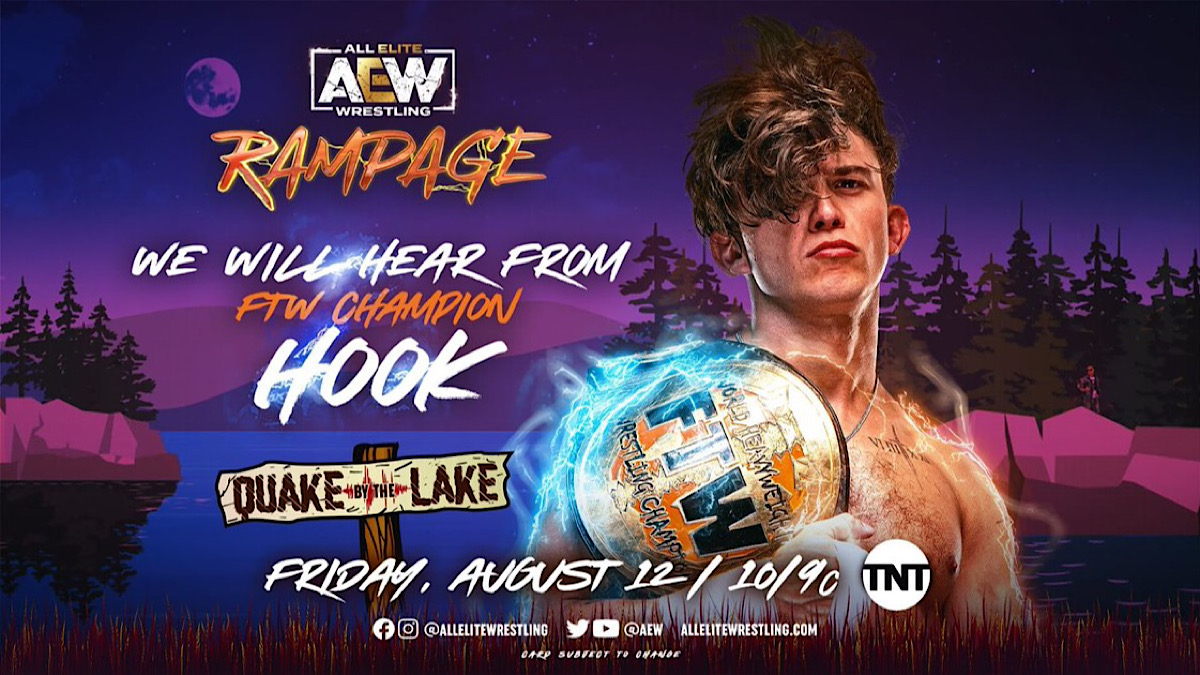 Hook comes out to the ring and Tony Schiavone tries to get that all elusive interview but they are interrupted by “reality star” Zack Clayton.

(Author’s Rant:  You’re probably wondering, like me, who is Zack Clayton.  Turns out he is the fiancee of Jenni “JWoWW” Farley of Jersey Shore “fame.”  Now if you will excuse me, I need to douse my keyboard in white whiskey and flood my remaining neural synapses in high octane mescal.

Sweet Jeebus Marimba!  I expect the low standards by WWE to employ the enfeebled and useless hacks that pass as “Hollywood stars”, but this…?!)

Ye gods, I went off on a tangent.  Anyway Long story short, Clayton challenges Hook for the FTW belt. Not now, though, since hisboots are getting made but he’ll want a fight next week on Rampage.

That was…meh.  Oh, and I swear before God and sunny Jeebus, if there is a “Gym, Tan, and Laundry” match, I will throw the nearest bottle at the TV.

Mark Henry is with Cassidy and Daivari for their final words before the match. Daivari says for Cassidy to join The Trustbusters.  He can see the value in Cassidy, so why’s he with the Best Friends? If he does join him, then he’ll beat him in right here in his “dumpster of a home town” in Minnesota. 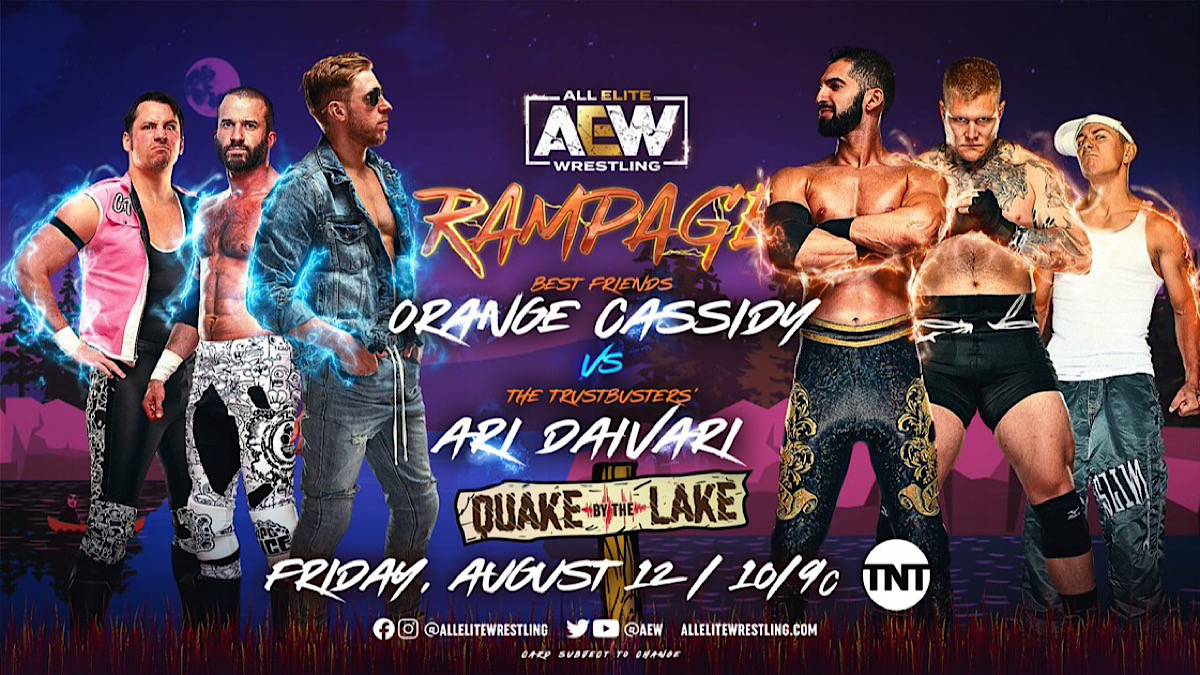 Orange Cassidy (with Best Freinds) vs. Ari Daivari (with The Truthbusters)

Cassidy attempts to start with the trademark Hands in the Pockets, but Daivari gets the mic to give him one more chance to join his crew.  Daivari tells Cassidy to just lay down for the pin, and then can get outta this jerkwater town. Cassidy obliges, and as Daivari goes for a pin, he rolls away. He then rolls to the other side for The Best Friends group hug (because you gotta give the people what they want).

Back in the ring, Daivari lands with a rope-assisted neckbreaker and then the beating continues during Picture in Picture.  The Trustbusters try to insert themselves to add more pain to Cassidy, but The Best Friends dissuades any thoughts.  Daivari comes outside and tries to put away The King of Sloth Style as he rams Cassidy into the ring apron.  Back in the ring, Daivari tried to choke out Cassidy, but he’s still in it and as he gets free they hit the ropes, and both men nails double clotheslines that knock them down.  Cassidy goes up the top turnbuckle and Cassidy lands with a crossbody. He tries to ram him into the top turnbuckle, but Daivari counters with a kick to Cassidy’s midsection. He tries a suplex but Cassidy reverses to a tornado DDT.  While dazed, Cassidy “kicks” Daivari’s back and then reels back for a “real” superkick. His Orange Punch is blocked and Daivari delivers a uranage for a two count.  He picks up Cassidy, who nails another DDT and then follows with a diving DDT for a two count.  Now the elbow pad is off and as Slim J gets on the ring apron, Best Friends get involved to minimize Trustbusters’ interference.  Cassidy launches himself with a tope suicida.  As he goes back up the top turnbuckle, Daivari blocks and sends Cassidy crashing down with a straightjacket superplex for a two count.  But Cassidy finally nails the Orange Punch and covers Daivari for the one, two, and three

Your Winner via Pinfall:  Orange Cassidy

The Trustbusters get more involved, and Best Friends attempt to take them out.  Now it’s just Cassidy and Daivari, but all of a sudden Sonny Kiss gets into the ring on Cassidy’s side.  As Kiss tells Daivari to back up, he turns and punts Cassidy right in his…err, tangerines.  Kiss now looks to be part of the growing Trustbusters faction as the show goes to credits.

This was a so-so show.  The only interesting things were Danielson’s promo on Daniel Garcia and Sonny Kiss’ heel turn.  Beyond that, there was nothing for me to get invested in (and do not get me started on Clayton asking for a match with Hook for the FTW title).

The important thing is that it happened, and this Rampage is over.

For now, see you in seven, and pray for no more reality stars in wrestling in our lifetime.