AEW Dynamite: The Best in the World returns 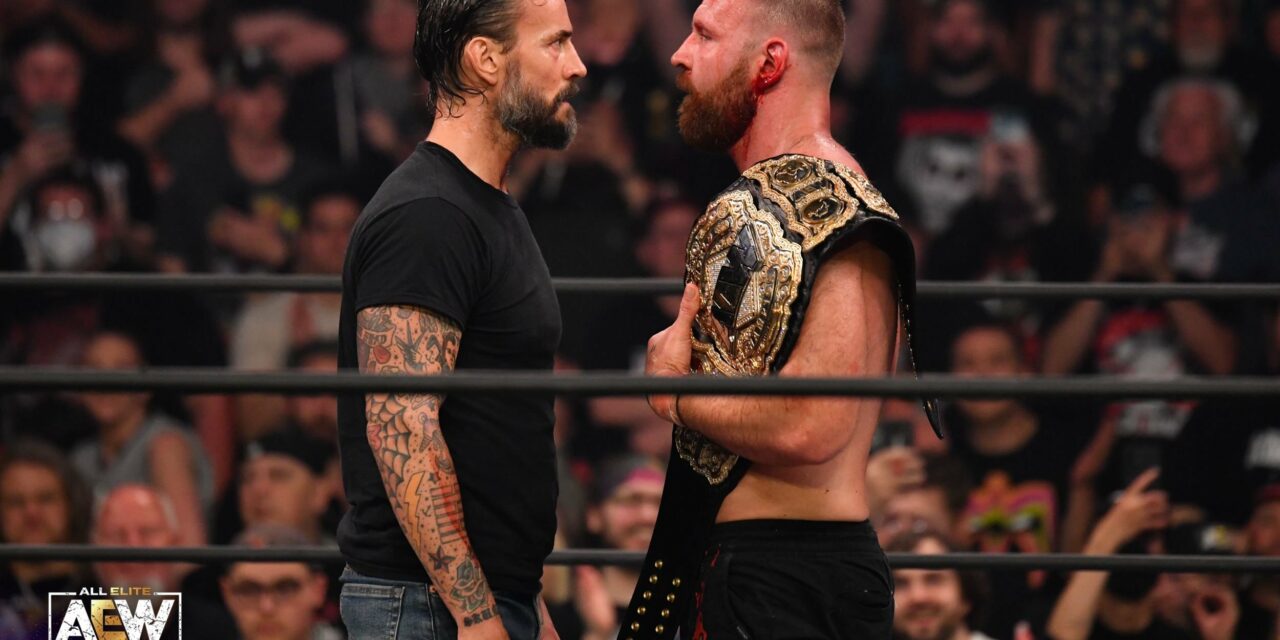 Welcome to “Quake by the Lake” on AEW Dynamite this evening. It only makes sense, seeing as they are in the land of a thousand lakes. There’s still work to be done with All Out four weeks away, so let’s get right to the action.

Allin jumps Kin before the bell, wanting payback for the incident at San Diego Comic-Con. Darby kicks a charging King in the face and hits him over the back with a tack studded skateboard. He rakes the board over King’s face, busting him wide open. Darby swings the board widely on the floor. King ducks and Allin hits the ring post. King breaks the board, but gets smashed into the ring steps. King catches Darby on the top turnbuckle. Allin with an eye gouge and hits an avalanche Code Red. Allin pushed King to the floor trying to drag him to the coffin. King stops Darby with a low blow. Brody sets up a table, laying Allin on it. King goes for a splash, but Allin rolls off the table. King crashes to the floor. The lights go out. When they come up the House of Black is protecting King. Darby shoots off the ropes, only to have his leg grabbed by Julia Hart. Buddy Matthews hits Allin with a chop block. Malakai stands over Allin. He picks him up and holding him in front of a table. King destroys him with a cannonball. King is slow to get up, but Buddy gets the coffin. He opens it to find Sting! Sting works Matthews over with a bat. Sting hits King in the gut and tosses the bat at Black. Malakai gets to his feet but can’t bring himself to strike Sting. Black walks out of the ring. He says something to King before walking off. Sting gives chase.

Moxley suggest we call the Interim Title the FYI belt. It’s about pain and how much you can endure. Tonight he is going to push Jericho to his breaking point. He will break Jericho’s spirit or body.

Chris Jericho is ready to take back the AEW Title. Moxley is going to get his wish and face the last survivor of the Hart Dungeon. Jericho never wanted to think about that pain again, but here we are.

So all four men are in the ring at the same time. Good luck trying to recap this one. You should probably search it out on YouTube. Rush decks Penta. The two face off, with Rush going to the floor. Andrade stops Penta in his tracks, grabbing a leg on the apron. Fenix takes out Andrade with a suicide dive. Andrade kicks Fenix out of mid-air. Andrade and Rush fly over the top rope to take out the brothers on the floor.

After a commercial, Penta with a DDT after getting catapulted into Andrade. Penta follow with a backstabber. Fenix hits a splash, but they can’t get the pin. Rush is hit with a double thrust kick. Fenix with an assisted splash on Rush. Andrade gets his knees up on the frog splash from Fenix. Andrade accidently superkicks his partner, but Rush bounces back with a drop kick to Penta. Andrade with the double knees to Fenix. Rush hits Fenix with a powerbomb, but Penta catches him with a cutter. Penta hits Andrade with a Canadian Destroyer on the apron. He sets up Rush for Fear Factor on the apron. Fenix gets knocked off the ropes by Andrade. Fenix eats a head but. Rush ties Penta to the ropes with his mask. Fenix with a kick to Rush but gets hit with a shotgun drop kick. Penta breaks up the pin after taking his mask off. Andrade grabs the mask and tosses it. Rush with the Bulls Horn kick. Andrade hits him with the hammerlock DDT and covers to get the win.

The Young Bucks enter the Dark Order’s locker room. They thank Hangman Adam Page for saving them and they apologize for how they have treated him over the past year or so. They tell Page that he brings out the good in them and asks him to be their Trios partner. Page has to decline because the Dark Order has been there for him and he needs to be there for them. Page is going to be in the Dark Order’s corner.

Jungle Boy Jack Perry joins commentary for the match. Perry mentions he won’t be here long and he is right. Luchasaurus dominates Henry and gets the win.

After the match, Christian Cage applauds from the big screen. Jungle Boy runs to the back and finds Cage, but AEW security holds him back. They can’t contain Luchasaurus, though.

Julia Hart tells Miro to embrace the gift. Miro tells her she isn’t the one that can touch him, but to tell Black he will accept the gift.

QT Marshall interrupts an interview with Powerhosue Hobbs. Marshall tells him that the Factory will take care of Ricky Starks.

Jay Lethal isn’t done with Wardlow, so Wardlow walks out to confront him. He tells Lethal he can have another match, but he’s going to woop them now. FTR joins Wardlow on stage. Lethal, Dutt and Singh exit the ring. Lethal tries to attack, but gets hit with the Big Rig.

Tony Schiavone is in the back with the JAS. Matt Menard feels that history will be made tonight when Chris Jericho wins the AEW title. Daniel Garcia calls out Bryan Danielson again.

Starks and Solo throw hands to start the match. Starks with a sling blade. Starks gets tripped up and Kole Carter  is kick out from ringside. Ricky with a jaw breaker and follows with a DDT. Ricky ducks a kick and hits the spear. He covers and gets the win.

After the match, Starks has to fight off Nick Comorotto and has to escape through the crowd. Backstage, Hobbs is not happy.

Lexi Nair tries to find out what is going on with the Gunn Club. Billy isn’t happy with his boys. Stokely Hathaway steps in, but Billy tells him to hit the road. Danhausen shows up for some reason.

Ari Davari wants to represent Orange Cassidy but he has to dump Trent and Chuck. Orange tells him no. Davari isn’t pleased.

Madison takes Jade off her feet, sending her to the floor. Rayne with a hurricanrana on the floor. Hogan provides a distraction, allowing Jade to hit a spear.  Cargill with a vertical suplex, but only gets a two count. Rayne counters with a jawbreaker and follows with a neck breaker. Rayne goes up top and hits a flipping neck breaker. Jade counters a guillotine, but Rayne counters back into a DDT. Jade kicks out at two. Cargill misses a pump kick and nearly hits Hogan. Jade blocks the Cross Rayne and hits Jaded. She covers Rayne to get the win.

After the match, Athena jumps Cargill in the ring. Hogan pulls the champ to safety.

Tony Schiavone informs Toni Storm that she is the number one contender for Thunder Rosa’s title.

The two flip each other off to start the match.  The two lock up and Jericho takes Mox down with a side headlock. The champ gets to his feet. Jericho with a shoulder block that does nothing. He slaps Mox, setting him off. Jericho locks in a stretch. The two trade chops. Jericho with snapmare and a kick to the back. He rips the earing out of Mox’s ear. Jericho drops kicks Mox off the apron.

After a commercial break, Mox is a bloody mess. The champ unloads with kicks. Jericho with a back breaker and follows with the lionsault. Mox kicks out and locks in an arm bar. Jericho punches his way free. Moxley with an ankle lock and then a German suplex. Jericho answers with a German suplex of his own. Lionheart hits a hurricanrana off the turnbuckle, but only gets a two count. The champ is in trouble, as Jericho slams his legs into the ring post. Jericho locks in the figure four on the ring post. Jericho breaks the hold at the four count. In the ring, Mox locks in a cross face. Jericho breaks free and locks in the Lion Tamer. The champ makes it to the ropes to break free.

Mox tosses Jericho off the apron and goes up top. Moxley with a diving sledgehammer. The champ pounds on Jericho on the floor. Mox goes up top again, but leaps right into the Codebreaker. Jericho only gets a two count. Jericho exposes multiple turnbuckles. As the ref tries to fix the turnbuckles, Sammy Guevara tosses a bat into the ring from the crowd. Jericho nails Mox with the bat, but still can’t get the three count. Mox with an inside cradle and then applies a rear choke. Mox is pushed into the exposed turnbuckle and Jericho hits the Judas Effect. Moxley kicks out again. Jericho grabs the belt, but misses Mox and is smashed into the exposed turnbuckle. The champ locks in the bulldog choke. Jericho escapes and locks in the Lion Tamer. Mox breaks free and unleashes a flurry of elbows. The champ locks in another bulldog choke. Jericho taps out.

After the match, the Jake Hagar and Sammy attack Mox. Claudio Castagnoli, Eddie Kingston, Wheeler Yuta and Ortiz make the same. The rest of the JAS hit the ring, outnumbering the Blackpool Combat Club. Jericho looks to take out Mox with the belt, when “Cult of Personality” hits. CM Punk is back. He cleans house, taking out the JAS.

Punk and Moxley face each other. Mox flips him the bird and walks off. That’s the show, see you in seven!

Another solid wrestling show. Check out the tornado tag team match. The coffin match was a hardcore showcase. Jericho and Mox put it all on the line in the main event, but more importantly, CM PUNK IS BACK!