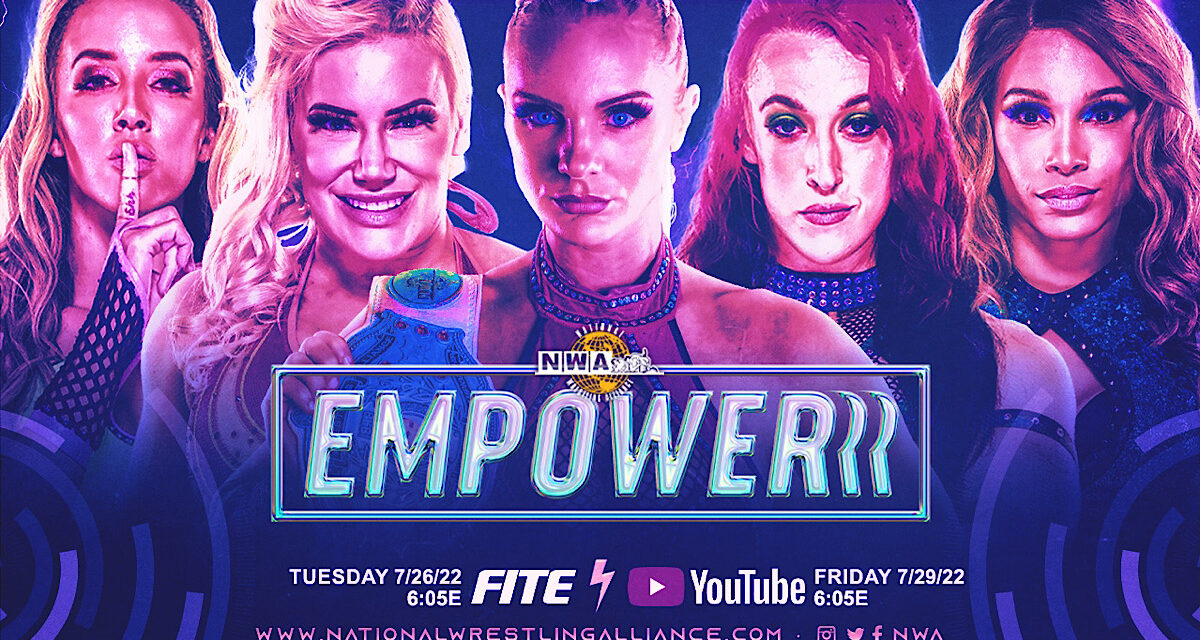 Welcome a special NWA POWERRR, where the women get the spotlight to show wrestling fans why they feel Empowerrred in the National Wrestling Alliance.  Not only is there a number one contender match between KiLynn King and Taya Valkyrie, but there is a title match as Kamille puts The Burke on the line against the female member of The Cardona Family, Chelsea Green.

That will be later in the show, as we go to a cold open, and Marti Belle, Paola Blaze, and Da Pope are at the Podium to discuss what EmPowerrred means to them. Belle and Blaze offer their thoughts in Spanish,addst Pope adds the emphasis that it gives the women the ability to be empowered in the ring, and that’s why the NWA is the place to be if you are a woman wanting to feel empowered in the ring.

The action comes to you from the Skyway Studios in Nashville, TN. Joe Galli, Tim Storm, and Velvet Sky have the call, and we go to the First Match of the night… 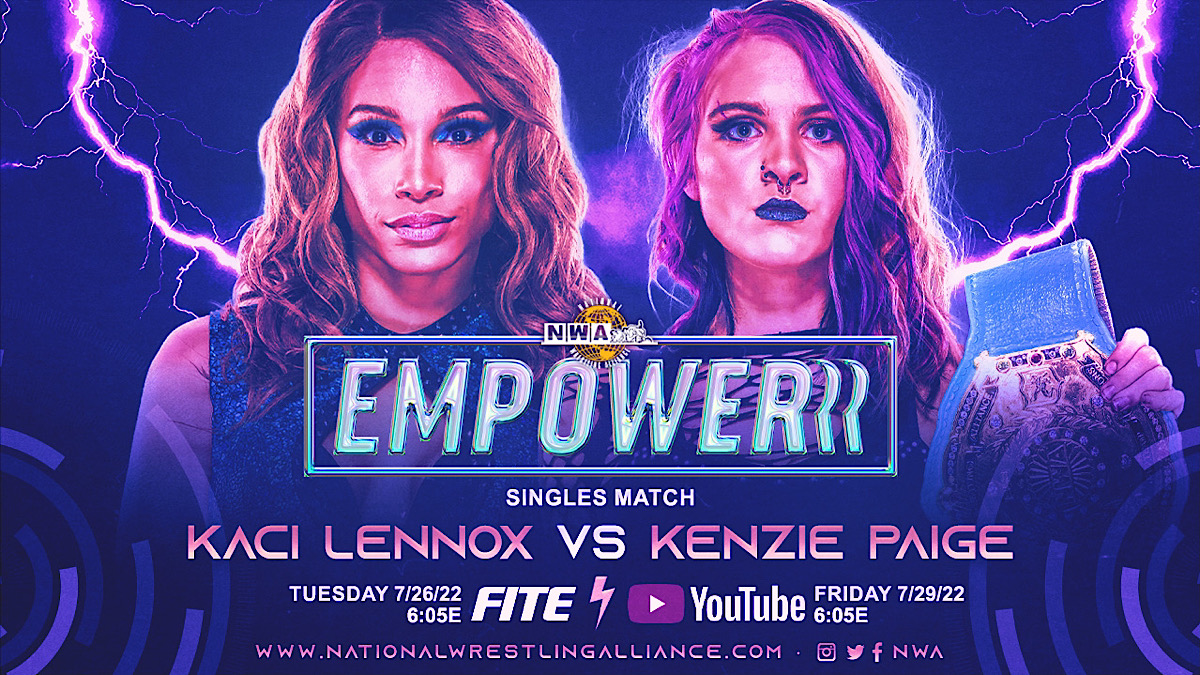 This is the debut match of Lennox against one-half of the NWA Women’s tag team champions.  Lennox has mostly wrestled in tbefores before this show, and as the match begins Paige is firmly in control until Lennox pulls her off the top turnbuckle to cover for a two count.  Paige is hurt from the forced landing, and Lennox takes advantage with double knees to Paige’s back.  Lennox gets aggressive, but Paige fights back and sends her head to the turnbuckle and then a missile dropkick for a two count.  Paige attempts a full nelson but Lennox reverses to a flatliner for a two count, and she screams like a banshee in frustration (it was seriously that ear-piercing).  Paige refocuses with a version of the Skull Crushing Finale (which I heretofore dub the Paige Buster ™) to get the win

Your Winner via Pinfall:  Kenzie Paige

And now for the… 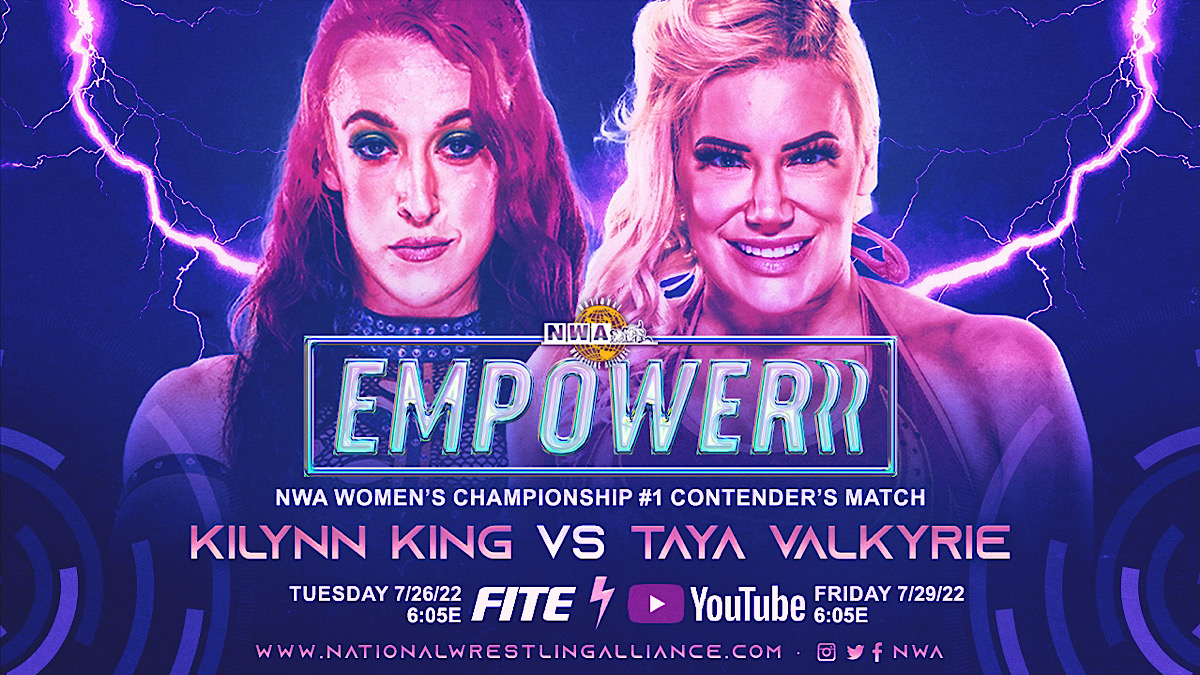 There’s respect between the two combatants before the start of the match, and both women are evenly match hold for hold, with neither giving an inch.  There is a Test of Strength and King looks dominant at the start, but Valkyrie reverses to a painful knuckle lock until the hold is released by King.  From there, King utilizes her power over La Wera Loca with a sitting surfboard to a curb stomp, and then she goes for joint manipulation, and Valkyrie gets her foot to the bottom rope to break the hold.  Valkyrie attempts with the Loca Lock, but King evades to get a big boot to cover for a two count.  King gets in a chinlock to wear down Valkyrie, but she fights back and slams King to the mat and follows with a mini stomp for a two count.  King tried to put her away to no avail, and Valkyrie gets a clothesline for a two count.  She goes for the Road to Valhalla finisher but it is blocked, and King reverses. She goes for the Excali-buster, but Valkyrie reverses back and now cinches in the Loca Lock to tap out King, and that means…

Your Winner via Submission, and Number One Contender for the NWA Women’s Title:  Taya Valkyrie

After the match, both women hug it out, but Valkyrie stays on to bask in the fan’s adoration.

Oh, and in case you missed it last week (and it has been a busy week, right Vince McMahon?), Billy Corgan stripped the Number One Contendership off Nick Aldis.  Tyrus, the current NWA Television champion, will vie for the Ten Pounds of Gold at NWA 74 against Trevor Thecally, the gist of it, according to an audio clip, is that Aldis was putting himself over too much and Corgan felt disrespected by that and thus made this change.

🤯🤯 JUST ANNOUNCED: @Billy has STRIPPED @RealNickAldis as #1 Contender for the Worlds Heavyweight Championship and is replacing him in the main event w/ the undefeated @PlanetTyrus!

Tyrus will battle @TheRealTMurdoch on NIGHT 2 of #NWA74!!!

(Author’s Note:  Whether or not this is a work or a shoot, it is intriguing to make this change just as the NWA is preparing for their signature PPV barely a month away.  But on a scale of one to MJF, there does feel like a kernel of truth to the backstage politics, but it’s hard to say how much or how little.  Either way, Aldis is still part of the NWA roster and this might be a case of cooler heads will prevail once the dust settles.  Should more details arise, we’ll cover the stories in the days leading up to the PPV.)

Valentine is backstage with Madusa and Allysin Kay, and Madusa announces the NWA Women’s TV Title. Kay says it means the competition is getting hot, and it will kick it up a notch, and She asks Madusa if she is competing for the title, and…she kHmmmmum. Hmmmm!

Now for the first of the title matches tonight, and this is for the… 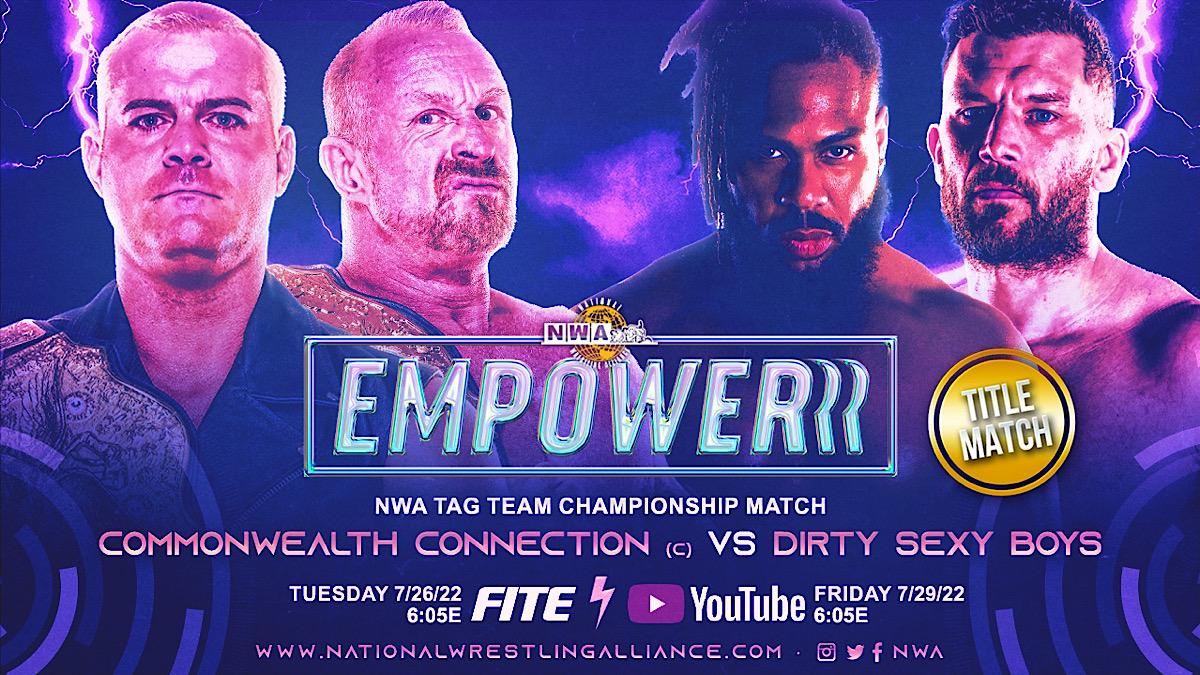 Fans chant “Let’s Get Weird” at the DSG, and Williams starts with Dango, and The Ambassadoputs on a another wrestling clinic that The Dirty One finds, well…weird.  Dango pushes him to his corner and tags in JTG and he goes at Williams, but a tag to Smith, and they take him down with a double team shoulder tackle.  Smith brings the power with a beautiful snap suplex to a bridge for a two count.  Smith utilizes his power, but JTG chop blocks his leg to gain the advantage.  He pushes Smith into his córner and JTG and Dango work him over, making him a Bulldog in Peril.

Dango gets Smith in a grapevine to his leg, and tags back JTG to a shin breaker to cover for a one count.  Dango tags back in and attempts a figure-figure four leglock, but Smith pushes him out to the floor. JTG sends him back in, but Smith tags Williams and he is an Ambassador en Fuego.  Tag back to Smith for a corner clothesline to a powerslam double team maneuver to JTG, and Smith covers for a two count.  It’s not long before the action breaks down and JTG lands his signature belly-to-back suplex/ neckbreaker for a close two count.  JTG goes up the top turnbuckle for a high-risk maneuver, and Williams holds his leg for Smith to grab him for the running powerslam and the pin, which means…

There is a recap of the Kerry Morton and Colby Corino fight from NWA USA but read it here if you want to catch up.

But it’s time for the Main Event, and it’s for… 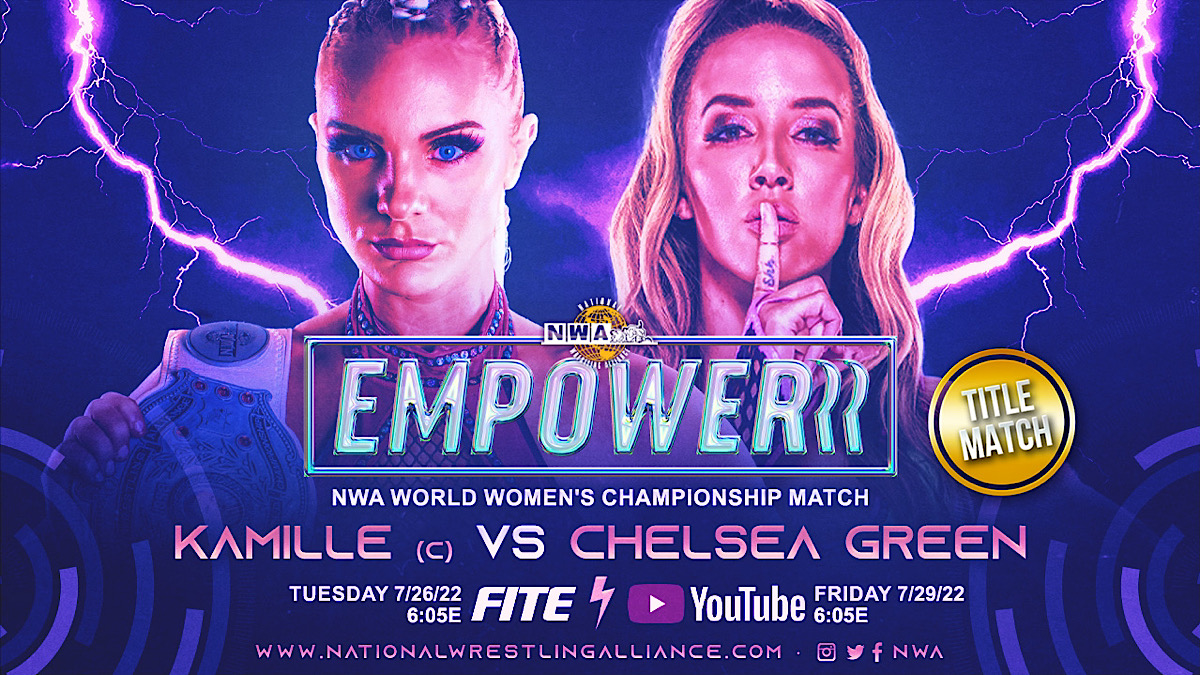 Kyle Davis is in the ring with Boxing style intros, as fans chant “One Time” in support of the champion.  The bell rings, and Green and Kamille tie up in this NWA 73 rematch, and it goes to a standstill.  Kamille is in firm control and she gets a wrist lock to pick her up off her feet, and then she lands a shoulder tackle and Green rolls out to Cardona to reset and rethink her strategy against The Brickhouse.

Kamille goes on the hunt, and Cardona (ever the chivalrous husband *eye roll*) blocks her path.  Green uses the opportunity to rake her eyes and slams her head on the steel steps. She rolls Kamille back to pin, and it’s only a two count.  Green gets Kamille on the ring apron and she dropkicks her to the floor.  Green goes to the outside and works her over adding injury to insult.  She brings back Kamille the hard way into the ring for a cover and gets another two count.  Green gets in from behind with a chinlock, but Kamille fights up but The Hot Mess chokes her with her long legs and then lands an elbow drop for a two count.  Green grabs her hair and whips her down hard on the mat. She attempts another elbow drop but Kamille rolls away, and Green misses the mark. Kamille fights back, but Green pulls her hair down to the mat and sends her again to the outside.  She goes for a tope suicida and Kamille gets an elbow to stop the momentum.

Kamille is on the outside, and Green is inside the ring, rocker to her core.  The ref counts to eight, and Kamille is back in the ring on offense with an Oklahoma Stampede that would make “Dr. Death” Steve Williams proud.  Kamille covers, but only for a two count.  Green kicks her in the sternum and goes for a stomp but misses, and Kamille lands with a big boot for another two count.  Kamille gets her in a powerbomb setup, but Green reverses to a head scissors takedown.  Kamille rushes to the corner but Green stops her and goes up top to deliver a blockbuster followed by a curb stomp for a close two count.  Green goes for the Unprettier finisher but it is reversed to a leg lariat by Kamille. She rushes to the corner and Green evades and gets a lungblower to a stomp into the bottom turnbuckle, and she covers to a pin, with Cardona holding her hand on the outside for leverage, but the ref sees it and stops the count.  Cardona protests on the outside and as the ref tries to deal with his nonsense, it’s enough time for Kamille to set up and deliver the spear to Green and cover for the one, two, and three.

Cardona takes his wife back on his shoulder, and Kamille is still dominant. Who can take down the Brickhouse? That is a question for another day, as the show goes to credits.

As always, the women’s roster of the NWA put on fantastic matches (and the men did okay as well in tag team action)

I kid!  The tag team match was great, and The Dirty Sexy Boys are hot, especially if they make Velvet Sky hot and bothered.

Kamille is just a dominant force, and while she was able to overcome Chelsea Green, one wonders who can take The Burke off The Brickhouse, or is she truly a “One Time” champion?  Either way, she is a pillar of the women’s division and will remain so for a long time.