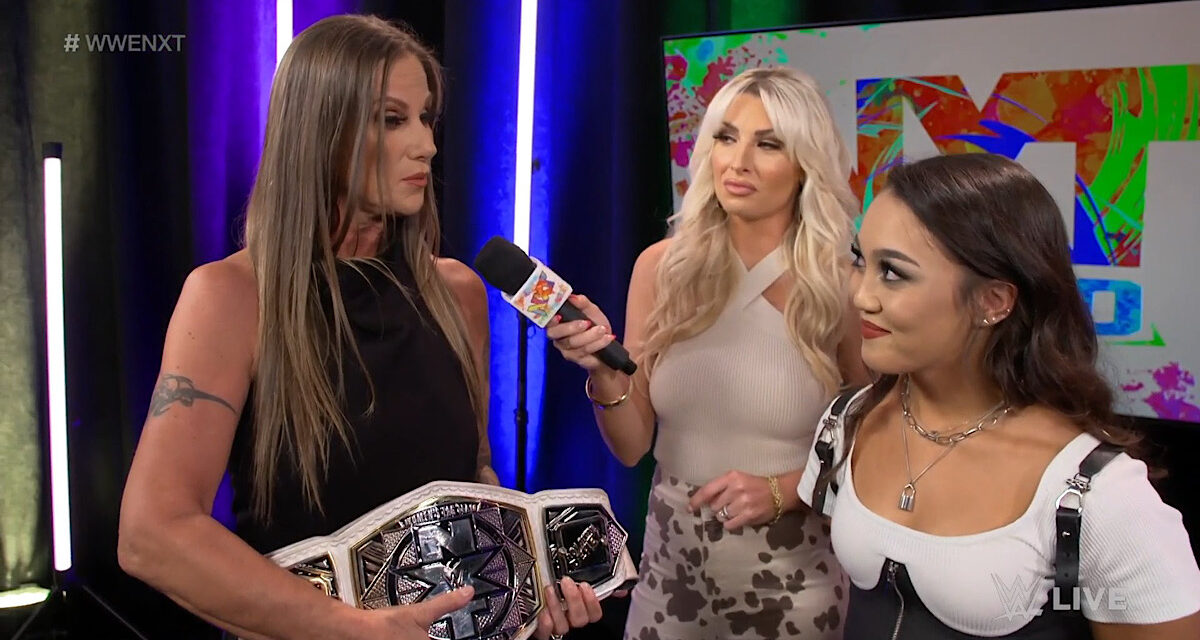 If Monday was the Triple H show, tonight is the Shawn Michaels show. D-Generation X really did get the last laugh from their 2006 feud with the McMahons after all.

After winning last week’s battle royal, Zoey Stark opens the episode to address her return. Her sights are set on NXT Women’s Champion Mandy Rose until Cora Jade interrupts from the ringside podium, who is noticeably more comfortable on the microphone proceeding her turn. Out comes Toxic Attraction of course, and Gigi Dolin makes the in-ring challenge for Stark later on.

In the back, Tony D’Angelo gives props to The Family before sending a message to Diamond Mine: “You can think that this is personal, but it isn’t. It’s just business – ‘Tony D’ business.”

Waller cut a charismatic promo beforehand, and in-ring he’s even with the agile Lee; the Aussie can do it all. His heat is predictably garnered through picture-in-picture, and Lee starts fighting back after hearing some trash talk. Lee is sent to the outside, but a “fan” batters him with a loaded glove; however, Lee beats the count at nine. But Waller capitalizes with his beautiful rolling stunner for the pinfall victory. The fan, Trick Williams, appears in-ring to diss over Lee’s fallen body.

The Schism – Joe Gacy, Rip Fowler and Jagger Reed (formerly known as Grizzled Young Veterans) – is interviewed backstage. Gacy talks about Cameron Grimes and his opportunity to join them. “Life must have gone seriously wrong for anyone who can accept Joe Gacy as a father figure,” says commentary.

Earlier today, Arianna Grace was approached by Indi Hartwell. “This is NXT, this isn’t ballet – or in your case, a beauty pageant,” Hartwell states.

With a generic theme and character now, Crews is back to square one. “Here’s the great thing about Quinn, he finally stopped giving a crap about what the NXT Universe thinks about him. He’s not trying to impress them anymore,” says commentary, and the notion is spot on, because he’s really not impressive. Quinn controls the majority of the bout, but Crews comes back with a backstabber and a slam for three.

Toxic Attraction is back on-screen once again, but they’re interrupted by schoolgirl Sarray. Mandy Rose looks to challenge Sarray for a match next week, but the music hits for Gigi Dolin.

Solo Sikoa hypes up next week’s Falls Count Anywhere match against Von Wagner, who is now missing a big piece considering that Sofia Cromwell is the head of Maximum Male Models over on Smackdown. Wagner probably wouldn’t qualify.

It’s Stark’s first singles match since October, and Dolin wants to put her back on the injury list. After some back-and-forth, Stark delivers some sort of flipping GTS and fends off the proceeding attack from Toxic Attraction. But from behind is Cora Jade with a kendo stick, which prompts the appearance of Roxanne Perez. The moving parts are great, because a standalone Toxic Attraction feud isn’t it anymore.

Wendy Choo has a nightmare about Tiffany Stratton. Why are WWE cameras watching this woman sleep?

JD McDonagh is in the crowd to introduce himself to everyone. He chastises someone for eating popcorn, threatens to use the timekeeper’s hammer, and compliments Alicia Taylor’s “fabulous” voice. He pressure-points Wade Barrett’s hands and Vic Joseph’s collarbone like a schoolyard bully before calling out NXT Champion Bron Breakker. McDonagh delivers a headbutt with his giant Irish skull, but Breakker gives one right back as the downed challenger smiles.

Chase University is met by Nathan Frazer, who asks to be an honorary flag bearer. They’re ridiculous, but these guys are fun.

A package highlights the debut of Axiom last week, one of the most blatant attempts of making WWE’s own comic-book superhero. This doesn’t have legs.

Roxanne Perez is still holding the NXT Women’s Tag Team Championship despite Cora Jade throwing it in the trash last week. Continuity prevails because Alundra Blayze arrives with the bin, removing the belt with Perez. Blayze announces a fatal-four-way elimination match to crown new NXT Women’s Tag Team Champions, although this storyline would’ve been a perfect way to retire the stagnant lineage altogether.

The classy Vinci must be fighting for fashion dignity, because his opponent in Chase is wearing Jordan 1s with slacks and a sweater. Chase gets some decent offense in before Vinci snaps a Chase University flag in half, but the professor makes a comeback following break (no pun intended). Chase is so easy to get behind, and those C-H-A-S-E stomps get the loudest reaction of the night – with help from the student section of course. Some awesome near falls later, Vinci delivers the finishing powerbomb for three. But in defeat, Chase might’ve seriously proven himself to be the heart and soul of NXT 2.0. Nathan Frazer saves him from a post-match assault to run off Vinci.

Diamond Mine is in the training room, and Julius Creed – who towers over everyone – gives the faction a pep talk preceding their main-event match. Afterwards, Valentina Feroz and Yulisa Leon are given words of encouragement by the big, burly, yet wholesome giant in Sanga.

Hartwell is in limbo after losing her faction, best friend, and husband. Her shtick now is that she likes the word “impressive.” In the opposite corner is a very green rookie Grace, who attempted a “vet move” by leveraging herself on the bottom rope. But the referee caught her, allowing Hartwell to capitalize with a big boot for three.

Mr. Stone declines Solo Sikoa’s challenge, but Von Wagner accepts the Falls Count Anywhere match. “If she wants to go be a model, good for her. I don’t give a s-” says Wagner about Maxxine Dupri.

Kiana James gives a slideshow presentation about Nikkita Lyons, complaining about her lack of clothing and vocabulary. Afterwards, a package highlights the ongoing feud between Lash Legend and Alba Fyre.

The Family vs Diamond Mine

Although both teams have experienced some dissension, they’ve come together for tonight’s faction warfare; Joaquin Wilde and Cruz Del Toro have assimilated by wearing black tank tops like leader Tony D’Angelo. The crowd erupts when an eight-man brawl commences, and Brutus Creed takes out The Family with a cannonball preceding picture-in-picture. Rookie Steveson brother Damon Kemp shows out for Diamond Mine, but he’s stifled by Channing Lorenzo and Del Toro. Julius Creed makes the comeback, and Diamond Mine wreaks havoc until Roderick Strong inadvertently hits the former with a jumping knee. D’Angelo capitalizes with Forget About It to emerge victorious in a great main event.

Alundra Blayze is approached by Gigi Dolin and Jacy Jayne in the parking lot, who ask for the NXT Women’s Tag Team Championships. “You want these titles? Next week you will have to fight for these titles,” says Blayze.

NXT was a mixed bag, as per usual, but the good parts were very enjoyable. The main event was chaotic fun, and Andre Chase put on an amazing underdog showcase. There are always gems each Tuesday, but you have to sit through the rest of it – which isn’t very enjoyable.