NWA USA: The Last Bastion takes on The Future Legend 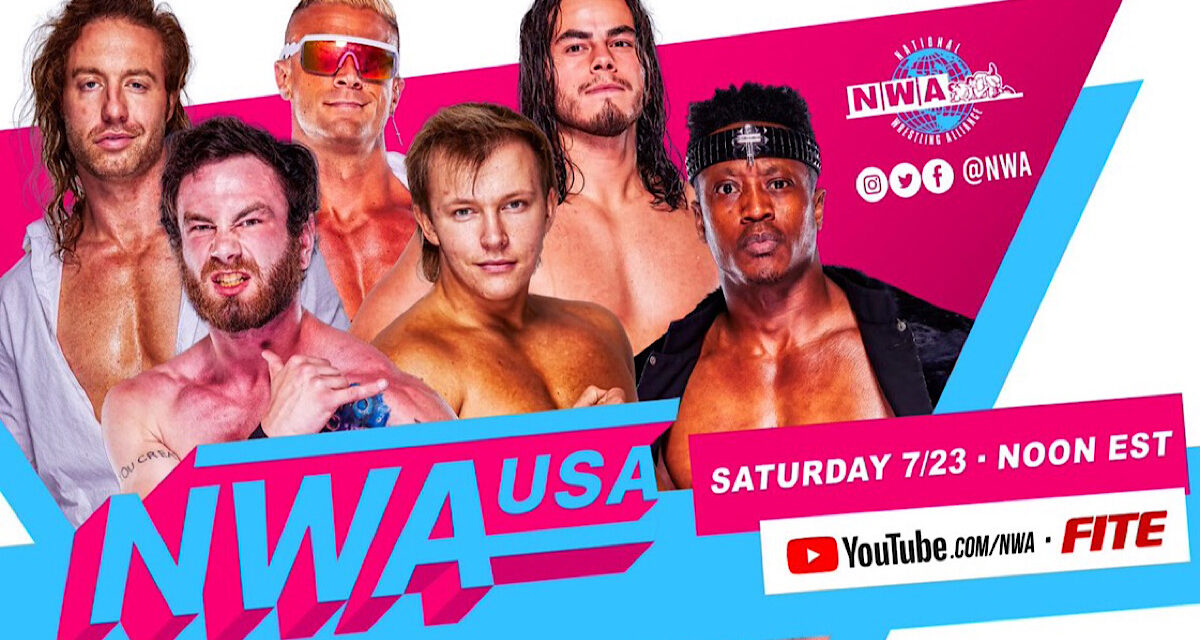 It’s Saturday morning and time to tune in to NWA USA.  The National Wrestling Alliance has a couple of good matches, along with Kerry Morton facing Colby Corino for yet another chance to insert himself into the NWA Junior Heavyweight title picture.  We’ll also hear from other stars of the NWA during the show, as we come to you from the Skyway Studios in Nashville, TN.  Joe Galli, Velvet Sky, and Tim Storm have the call, and we dive right into the First Match. 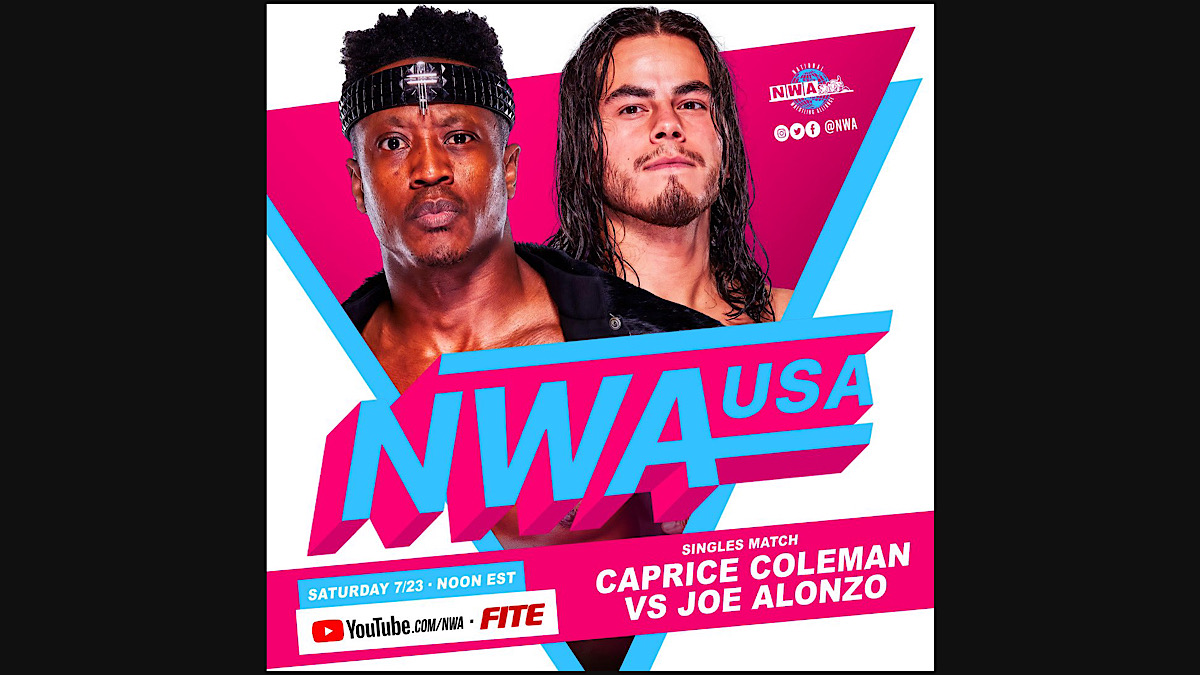 “The Ageless One” Caprice Coleman vs. Joe Alonzo

This is the second time Alonzo is in the ring, after taking Cyon to the limit during PowerrrTrip

The upstart manages to take it to The Ageless One with a backdrop to apron edge and Coleman fights out.  Coleman schools Alonzo with a leaping leg lariat to cover for a two count.  He calls for Trinity time, but Alonzo fights out before he can get the finisher.  Alonzo nails with a wicked neckbreaker to cover, and Coleman rolls to ropes.  He pulls him off and gets the cover,  but it’s a close two count.  Alison sets him up the top turnbuckle, but Coleman monkey flips and gets a leap of faith (leaping huracanrana) to Alonzo, and then follows with The Trinity.  Amen and Hallelujah, he got the pin.

Your Winner via Pinfall:  Caprice Coleman

Coleman is with Kyle Davis at The Podium, and he proved he can do whatever he wants at 45 years.  He promises that nothing,  not even Father Time, can stop him.

May Valentine is backstage wih Ricky Morton and Luke Hawx.  Morton assesses his son’s chances, and he says he’s prepared for moments like this.  Hawx is upset that when he and his son got jumped the Morton’s didn’t check on him.  Morton retorts that in this business you got to be ready at all times, and sometimes you don’t know what going on.  He does offer his hand to squash this, and Hawx walks away.  Something is simmering, folks. 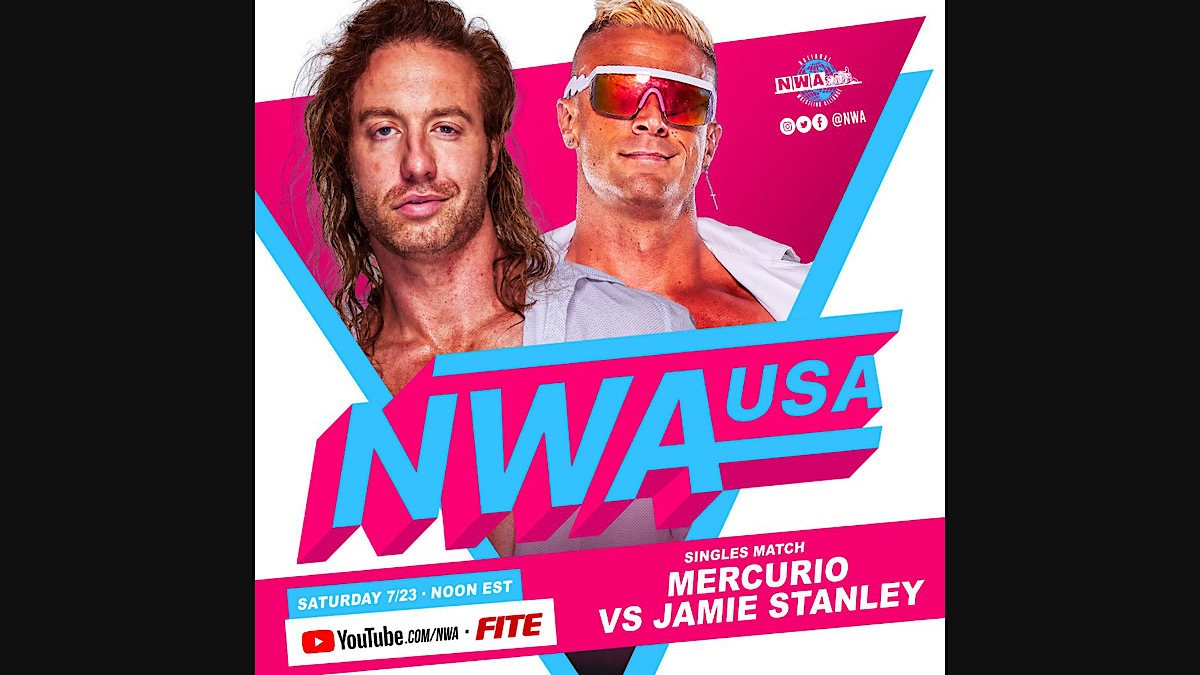 Because I can, I’m calling this a Him-Bo Hossfight™, but really Mercurio dominates throughout the match and trash talks Stanley for “making-a the ugly face.” Stanley fires back and berates him for attacking America’s Jawline.  He rushes in the corner, but Mercurio evades and he gets the ring post.  Mercurio lands his Last Romance finisher (a Killswitch setup to a spinning neckbreaker) to get the pin and the win.

Your Winner via Pinfall:  Mercurio

There’s clips for last week’s NWA POWERRR from the women’s triple threat, but catch up here if you missed out.

Odinson is backstage with May Valentine about his chances against Tyrus.  Odinson is confident that he can beat him, but Valentine not so much.  She inquires the state of his tag team with Parrow and The End, and Odinson says she does not need to be concerned.  Valentine asks why he sprays paint, and Odinson says it’s to prepare when he enters Valhalla “shiny and chrome.”  Valentine looks more confused by that (even though if you’ve seen Max Max: Fury Road, it makes sense).

I’m not sure why, but this backstage segment felt…disjointed.

Now, Jax Dane and Chris Silvio, ESQ are here with Valentine, and the title shot was wasted on Eric Jackson.  Therefore there will be no title shots this season of NWA.  When she asks Dane who his next challenger is for the NWA National title, Dane laughs and says it don’t matter if it’s Cyon, Rodney Mack, or even Jesus himself, because he will be The Dane Event.

But now we get to The Main Event, and it is… 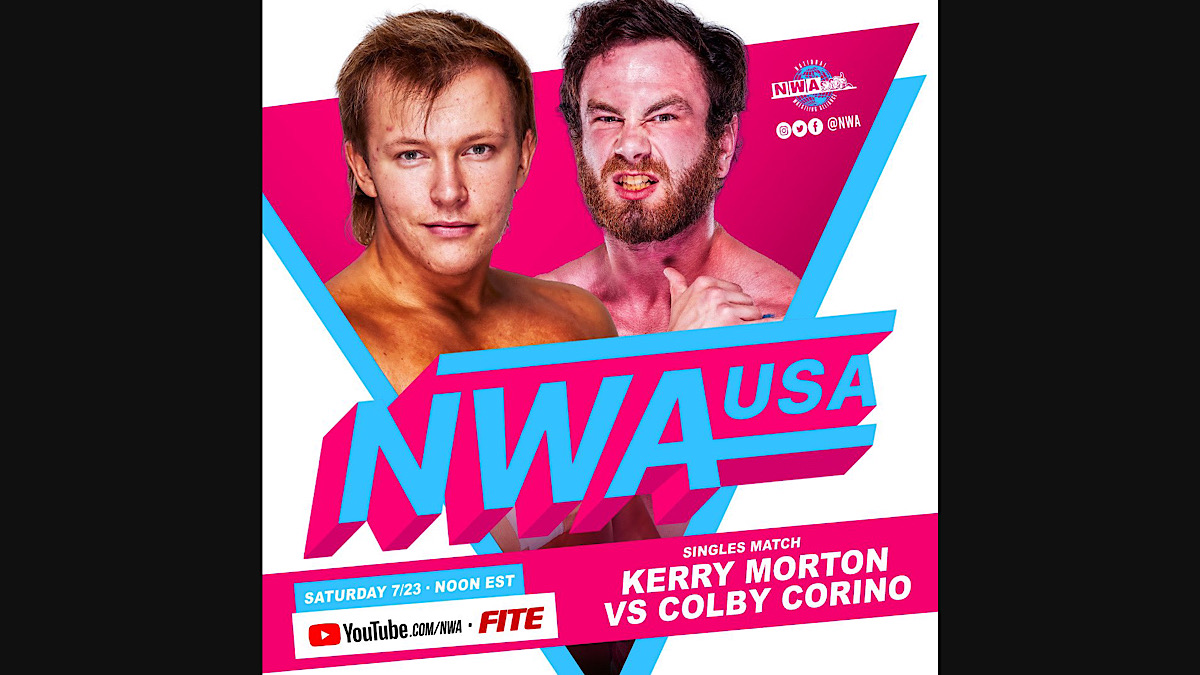 Morton wants the ref to check for a foreign object that Corino might be holding.  The ref makes Corino give up the goods, and he whips out (phrasing) a metal bar.

(Author’s Apology:  Every once in a while, the Archer in my brain yanks something out.  I can’t help it)

Now the match begins, and it’s a fast-paced start, with Morton in full control, and he gets a German suplex to The Last Bastion.  He sets up for a vertical suplex, but Corino reverses to a stunner.  He jaws at the crowd, and Morton recovers to gets a discus lariat to cover for a two count.

They hit the ropes, and Corino cuts him with a spear, and now he’s got the momentum.  They battle to the outside, and Morton manages to land with a sliding dropkick to Corino.  He goes up top and adjusts his knee pads, but Corino takes advantage with an avalanche arm drag to cover for a two count.  Now Corino climbs the top and lands a swanton for another two count.  Back and forth both men go with pin attempts, and Morton hits a neckbreaker and follows up with a steamroller.  The Future Legend attempts the Kiss It Goodbye running knee, but Corino evades and gets a backbreaker.  Corino goes for the Sonsetter, but Morton rolls him up for the one, two, and three.

Corino is in disbelief, but Morton picks up the win and he is still secured with his title shot against Homicide going into NWA 74, as the show goes to credits.

The matches were solid throughout, and Morton and Corino delivered the goods.  Really, though, Corino makes any match better in comparison.

The interview segments felt…off, is the only way I can describe it, but it was still good regardless.

Until then, see ya next Saturday!