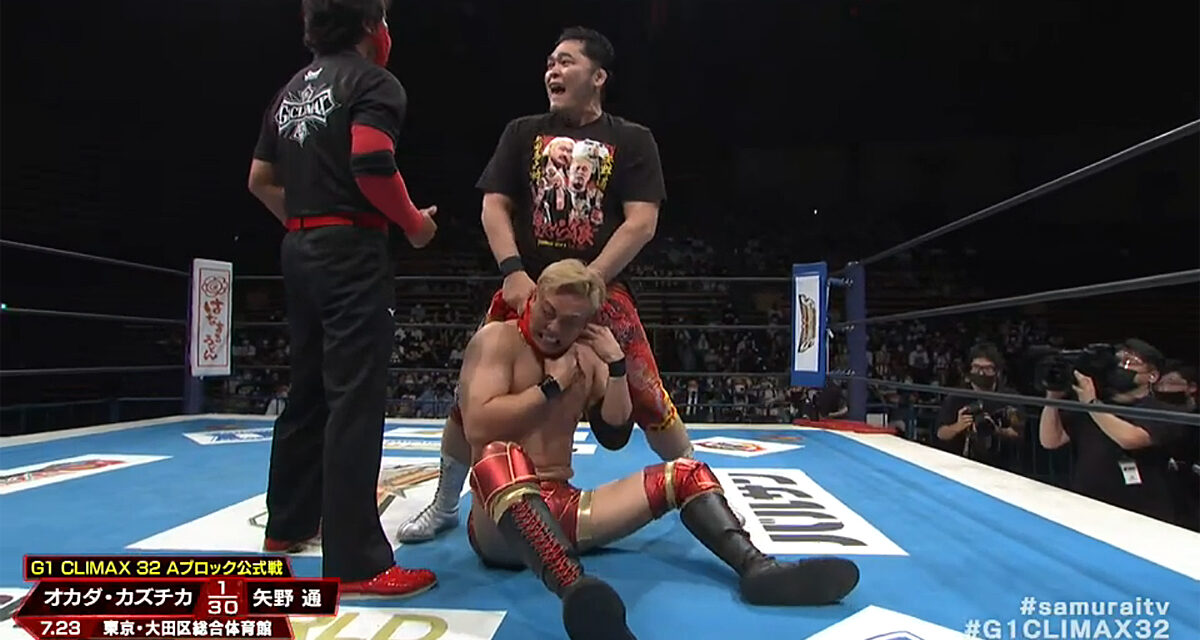 Kazuchika Okada, Zack Sabre Jr. and Jay White are sittign at the top of the NJPW G1 Climax tournament with two wins and four points each.

The most interesting match of night four though was a grudge match of sorts between Chaos members Toru Yano and Kazuchika Okada. Yano made his entrance with no fun and games, sipping from a bottle of sake. It was not the fun-loving Yano that Okada was facing. Yano attacked Okada before the bell rang strangling him with a shirt. Yano threw the shirt at Red Shoes when he admonished him with a four count after calling for the bell to be rung.

On the floor, Yano threw Okada into the ringside barricade. Okada returned the favour. Okada sat Yano in his steel chair, hit him with a forearm barrage and then tried a running clothesline. Yano dropped down sending Okada head-first into the chair with a drop toe-hold. Okada barely beat the count back into the ring.

Back inside the ring Yano smashes Okada’s back into an exposed turnbuckle. Yano loosens some of his wrist tape and strangles Okada with it. The crowd starts clapping Okada’s name as they are still not permitted to cheer due to COVID restrictions. A running elbow smash in a corner along with a DDT has the momentum back with Okada.

Okada lines up Yano for a Rainmaker. Yano hits the official, spits the sake into Okada’s eyes and hits Okada with a chop block. Yano only gets a two count. At the fifteen minute mark Yano submits to the Money Clip. Okada brings the bottle of sake and Yano’s steel chair to him. The two shake hands. The bitter rivals are now friends again. Okada has now beaten Yano and Jeff Cobb.

Shingo put Hashi away with a simple roll-up after absorbing Karma and everything Hashi could throw at him.