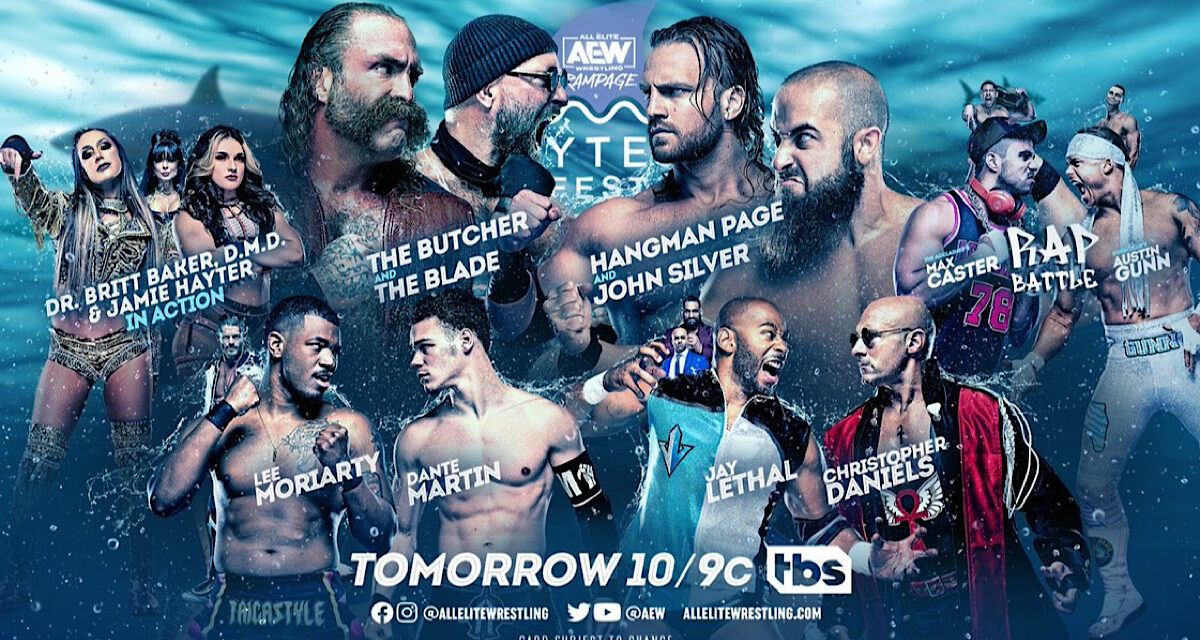 It’s Friday night and…yeah there is a lot going on in the world of wrestling, to say the least.  So let’s get to AEW Rampage for Night two of Fyter Fest, where we make the final push before sting of Honor’s Death Before Dishonor pay-per-view, and we get a battle for the ages…a rap battle between Max Caster of The Acclaimed versus Austin Gunn.

But let’s go to the First Match in progress, and it’s…

John Silver and “Hangman” Adam Page vs. The Butcher and The Blade

“Johnnie Hungee” goes right at Butcher and the Blade, and they work him over in the corner.  Silver manages to reverse with a suplex, and Page gets the hot tag and he gets, as Ross calls it, “all the shiznit.”

(Yeah, that actually happened.  I cannot I hear that)

Page lands with a flying lariat on Blade to cover and gets a two count.  The action spills outside, and Butcher throws him to the guardrails, and then sends him back in ring for more damage during Picture in Picture.  Page gets the hot tag to Silver, and he is a Hungee en Fuego, as Silver nails with an Olympic Slam to cover Blade, but Butcher breaks the count.  He tags back to Page, and he dumps Blade to the floor.  Butcher and Page battle out with dueling forearms, but the Hangman gets Butcher unseated with a discus lariat. Page stun guns Butcher on the ropes, with Silver assisting with a German suplex and Page with the Buckshot Lariat ends the match.

Your Winners via Pinfall:  John Silver and Adam Page

We get plugs for Wheeler Yuta and Daniel Garcia for the ROH PURE title, and each man makes their case.

#ROH Pure Champion @WheeleYuta crossed a line! #JerichoAppreciationSociety's @GarciaWrestling is set on taking Yuta's title, when they go 1-on-1 TOMORROW at #DeathBeforeDishonor LIVE on PPV! Available on @BleacherReport, @ppv_com + more!

Tune in NOW to #AEWRampage on TNT! pic.twitter.com/oQjKxxLwIo

Claudio Castagnoli cuts a promo in the ring plugging his match with Johnathan Gresham for the ROH World title at the Death Before Dishonor PPV.  He says he was the best not because of his ability, but because the fans that were behind.  He then turns his attention to Gresham, and says he is the Foundation but it’s on shaky ground.  Castagnoli emphatically states says no one can hold a candle to him in the ring, before delivering a mic drop.

Again, if Chris Hero is not in Castagnoli’s corner at the PPV, I will be sorely disappointed.

There is a Wardlow video package and him defending the AEW TNT title.  He will beat any one, anywhere.  Even in another promotion.

Tune in NOW to #AEWRampage on TNT pic.twitter.com/yhm868W1WN

But let’s dive into the next match…

This was set up by Matt Sydal to help give Moriarty a chance for a win, after all the losses due to cheating.  This is a Top Flight versus Taiga Style, as both men exchange hold for hold.  It’s got a bit spot-tactic, but Martín gets the upper hand going into Picture in Picture.  Martin is in firm control, but Moriarty gets him in a guillotine choke to a suplex with a bridge.  Moriarty is showing more of a mean streak, and gets real aggressive with Martin grounding him with an armbar and then..

Ads (I can’t.  I just can’t with these terrible ad placements, when you got Picture in Picture to avoid THIS EXACT GODS DAMNED THING!!)

Back in and Martin gets Moriarty with a leaping huracanrana.  Stokley Hathaway comes out backstage  to watch, and Martin lands with a crossbody and gets a two count.  Moriarty  gets a rollup pin out of nowhere, but Martin kicks out at two and Taiga Style transitions seamlessly into a Border City stretch, but Martin gets the bottom ropes to break the submission.  Moriarty stomps on his back, and Martin returns back with a siting slam for a two count.  Martin goes to the top for the Nose Dive and misses, but Moriarty rolls him up and grabs the ropes for leverage.  Referee Aubrey Edwards is not in position to see, but she counts the pin, and…

Sydal gets on the mic, and is hot about how he cheated to win.  Next week, Moriarty will face him one on one, and he lets his protégé know that he’s not ready.  As Moriarty walks up the ramp, Hathaway offers his card for his services, but he shines him on.  Is that the last we’ll see, I wonder.

Speaking of, here some more women’s action with…

The intro lasts longer than the match, and I am in no mood to recap something meant for AEW DARK, so enjoy this Haiku in Review…

Rapper Lil’ Scrappy is in the ring to judge the Rampage Rap Battle between Max Caster and Austin Gunn.

I will say, Austin has some chops, and apparently he can spit some rhymes.  Caster, though, is untouchable and just schools him.  But watch this and see for yourself…

The Acclaimed won but The Gunn Club attacked them after and laid them out.

Again, I will take this over Logan Paul. Every. Single. Gods Damned. Time.

Mark Henry is backstage with Jay Lethal and Christopher Daniels says he doesn’t need to stick up for Samoa Joe, but doesn’t like how it’s being dragged in the mud.  Lethal and Sanjay Dutt aren’t done but they will make an example to send a message to Joe.  ,pDaniels asks Henry to hit his catchphrase because he’s done.

Well, that been enough talk, because it’s time for the Main Event…

I am a bit biased when I state for the record that ROH announcer Bobby Cruise has the best ring introduction of all time.  You may disagree with me, but please know you are wrong.

Caprice Coleman joins on commentary to add some more dimension to these Ring of Honor veterans.  Lethal starts off hot on The Fallen Angel, but he gets back in control with a slingshot elbow drop and then a back elbow to cover, and Daniels gets a two count.  He nails with a leg lariat to dump Lethal outside.  Daniels uses the ropes to slingshot and leap out, to the floor but Lethal gets back in the rings and lands with a basement dropkick followed by a tope suicida to Daniels on the outside of the ring.

During Picture in Picture, Daniels crawls back to the ring,  but Lethal stun guns him off the top rope to send crashing back down to the floor.  He follows with a springboard dropkick on Daniels for he outside and another tope suicida.  Dutt lays in boots to Daniels to soften him up before sending him back in the ring.  Lethal is in full control with a sitting headlock.  Daniels fights back, but Lethal keeps him  grounded, and he lands his signature hip toss to a cartwheel/dropkick combo.

Lethal sets Daniels up the top turnbuckle to do a Muscle Buster to send message to Samoa Joe.  The Fallen Angel fights him off and goes for a splash, but he misses and Lethal gets a basement superkick to the side of his head.  Lethal attempts a suplex, but Daniels nails with a desperation knee to get some space, and now he starts to get momentum on his side.  There’s an STO by Daniels and a Blue Thunder Bomb to Lethal to a cover, but he gets a two count.  Lethal gets his signature Lethal Combination and goes up top for an elbow, but when he comes down Daniels his a foot up and Lethal stops and tries a figure four but Daniels rolls up to a pin, but Lethal escapes.  Daniels attempts the Angel Wings finisher, but Lethal reverses to a back body drop and now he delivers a Lethal Injection to cover for the one, two, and three.

After the match, Dutt and Singh add more injury, with Singh managing a huge gorilla press slam to Daniels.  Lethal cinches in a Kokina Clutch to send a message to Samoa Joe ahead of Death Before Dishonor as the show goes to credits.

Now that is how you get people interested in a PPV; with a tight Main Event.  Daniels and Lethal are at the top of their game, and Lethal having momentum on his side as he prepares for Samoa Joe is going to be a match to see at the PPV.

Overall, a solid show.  I wasn’t event bothered by the rap battle for the simple fact that anything is better than Logan Paul.  I will continue to use that as a benchmark of what not to do in a wrestling ring.

Until then, see ya tomorrow for my Death Before Dishonor PPV recap!