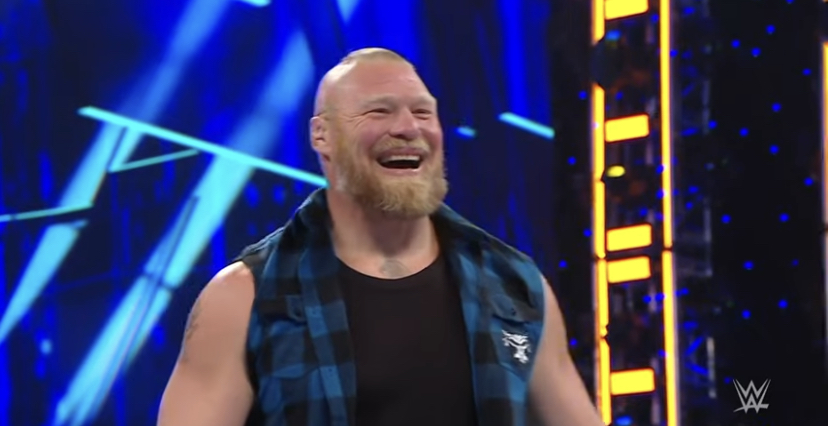 I can’t tell you how excited I am for next week. SummerSlam is going to be a blast, which is a word I don’t usually use; nonetheless, it applies greatly here. I’m excited for the Usos and The Street Profits’ Championship match. Which are you ecstatic for?

Anyway, we are in for an amusing night. Who doesn’t love seeing wrestlers sweat excessively and backtalk? I adore it.

Well, to talk about exciting. Stephanie McMahon is on SmackDown tonight. I haven’t seen her in a while. She’s here with feelings of her father’s, Vince McMahon, retirement. The whole WWE crowd of fans thanks McMahon for decades of entertainment and community.

As we move on from that, The Street Profits make an explosive entrance through the audience. With their long-standing rivalry against the champ twins, the Usos, the Profits are here to remind us that they will be the Undisputed Champions by next week. But who cares, right? Theory doesn’t. He shows up still holding that Money in the Bank briefcase taunting that he will cash it in against the Beast, the Tribal Chief, or Bobby Lashley.

And speaking of sudden appearances, the Usos arrive to intimidating Theory about his tendency to have Roman Reigns’ name spitting out from his mouth. If that wasn’t surprising enough, Madcap Moss shows up too and attacks Theory. Moss and the Profits team up to push out the twins and Theory out the ring by helping Angelo Dawkins fly and land on all three of them beautifully.

Quite the start of the evening.

To hell with Ludwig, honestly. Gunther puts further pressure onto Kaiser for winning this match against Nakamura since last week, Kaiser lost poorly. Hilarious to me, so I don’t care.

Kaiser does start the match with most of the momentum over Nakamura, but I won’t count my chickens yet. Shinsuke retaliates by sending Kaiser against the ropes, he bounces and Nakamura kicks him in the jaw.

I looked away for a moment, just a moment, after hearing a clacking thud when Kaiser does a running knee kick to Shinsuke’s face. Mega ouch!

I’ve never heard someone yelling so much on the sidelines like Gunther does. He’s so loud, but whatever it is he’s saying is getting Ludwig fired up to push Shinsuke shoulder first against the steel stairs.

During the commercial break, Ludwig has been dominating the battle, but due to his need to pay attention to Gunther’s roaring voice, Shinsuke gets back on top kicking him in the back.

Since Gunther doesn’t want his… uh, subordinate to lose, he helps him by distracting Shinsuke outside the ring by bonking Nakamura on the head. Ludwig rolls Shinsuke up for the win.

As Ludwig celebrates his win, we all thought Gunther awarded Kaiser with a simple pat on the back… yet he suddenly chops Kaiser to the ground. That’s a shocking ending, but I’m not complaining.

Next week, Liv goes head-to-head with Ronda at SummerSlam for the SmackDown Woman’s Championship. Although, Morgan is an amazing wrestler, I still believe that Rousey is the ultimate when it comes to this sport. She’s fire, and she will burn you to high heaven. BUT… I won’t underestimate Morgan for one second. I’ll just wait.

I think I love being jumpy because Happy Corbin appears from nowhere to deliver cheap shots to Pat McAfee like the dickhead he is. McAfee chases after him backstage and continues to engage in fisticuffs with Corbin until Adam Pearce breaks up the fight.

This is the second rival McAfee has had, first Theory, now Corbin. That’s what happens when you speak the truth and people like Corbin specifically take it to another level of cheap.

The New Day is sitting at the commentary table with Michael Cole and Pat McAfee tonight. I thought I was watching one of LMFAO’s videos, if you remember him, because Xavier Woods was wearing one of those freaky unicorn masks you would find at Party City.

The match wasn’t interesting at all, so it was hard to watch. The only thing that’s noteworthy would have to be once the Raiders started scowling at the New Day, they manage to have Jinder and Shanky crash into them. Causing the Vikings to win by count out.

I’ve never said this before, but this was the most boring battle I’ve ever seen on WWE since I started watching it at 11-years-old. Blehh!! Distasteful.

You know, for a second, I thought Sheamus had a mystery lisp when he said hello to Boston. As usual, that’s weird of my hearing, but that was the best stimulation I’ve gotten after the previous so-called match.

What’s happening again?… oh right! Sheamus and McIntyre’s rivalry that stunned the planet last week was with Drew’s sword, Angela, cutting through the ring ropes and scared Sheamus so bad, he sh*t his pants or his undies.

Sheamus makes his Good Old Fashioned Irish Donnybrook match official by Adam Pearce, and to end this segment, why not have McIntyre slice Sheamus’ stick with his sword? That was abruptly brutal. I love it.

Backstage in the dressing room, The Usos chat about their temporary alliance with Theory, Paul Heyman comes in to deliver… insightful points to the twins that they should remember that they can use Theory as an in-between during the match. And once the game is over, the twins can sweep Theory out. Ooh, petty.

This is the only time any of you will hear me say that Heyman was “insightful”. Never again. I can’t believe I said that… arg.

Sonya Deville is adamant that due to tonight’s shenanigans with the Viking Raiders and New Day, that Adam Pearce isn’t doing a good job. That there wouldn’t be any anarchy if she’s at the helm. Because Deville always feels the need try and one-up Pearce, he puts her in a match against Rodriguez. A good and sassy way to pound decency into someone is by throwing them into a legal battle with Raquel.

The bell is rang and the battle begins. Rodriguez charges Sonya, she dodges by grabbing hold of Raquel’s waist, yet Deville couldn’t lift her up.

Sonya tries something else as she slings Raquel’s arm and sends her crashing into the corner. She goes to hit Raquel’s face against the top and second turnbuckle rapidly and violently. All the anger she has towards Pearce is redirected to Rodriguez.

While Sonya fights off Raquel’s attempt at pinning her down, Deville has surprisingly gorgeous hair. I kept looking at how flow-y it is. Like tall grass.

Anyway, momentary lapse, Sonya ventures to plant Raquel on the mat head first, but she gets caught mid-attempt. Raquel uses her phenomenal strength and tosses Deville away like a piece of crap.

Deville ‘DDTs’ Raquel, but she fails to pin her. Sonya decides to kick her opponent as she’s on her knees, suddenly as she goes for another kick, Raquel catches Sonya and powerbombs her for the win.

Since Lacey has dipped on both matches against Aliyah for two weeks because she demands respect from the WWE universe, which Evans hasn’t gotten, she’s pissed, can’t blame her. Unfortunately, Aliyah doesn’t see it that way, so she instigates that Evans is afraid to face her, hence this match.

I’ve been hearing Aliyah’s theme song so many times this year, but she doesn’t stick in my mind long enough because of her lack of presence. Except for when she kept getting locked in a closet by Shotzi months back. Funny, though.

What’s still amusing to me, in the worst way possible, is that Lacey takes the mic again to trample the audience like a herd of frightened cows with her further shock on disrespect from the crowd.

Aliyah was getting impatient, so she yanks Lacey by the arm, Evans orders the referee to hold her back till she’s finished, yet she shocks Michael Cole and Pat McAfee with a ‘Woman’s Right’ to Aliyah’s jaw. And… walks out. AGAIN! I understand Lacey’s frustration, but if this happens again, I’m shutting my screen off for five minutes and burning something. Maybe that’s better.

Jeff Jarrett is interviewed by Kayla Braxton backstage for his next week referee gig for the Usos and The Street Profits’ match. He’s honoured to be back here surrounded by the energy he knows he loves and misses.

So, I was confused when I found out that Max Dupri has a sister, Maxxine Dupri. She’s here to tell us that she’s joyful to be the one to present another clothing line by Maximum Male Models to “Titillate our juices”. Uh… mmhm.

Jimmy starts off the battle against Dawkins, yet Angelo is the one on a roll with a jump kick and a few choke holds from behind.

Montez leaps in with a strange spin kick to send Jey flying after Jimmy’s brother tries to help him. Theory gets rammed by Moss out of nowhere as well. I cried with joy when I saw that. Montez goes further by making fun of Theory while using his briefcase as ammunition.

Theory is tagged into the ring to raise some hell to Moss. Theory gut slams Madcap against the turnbuckles multiple times before flipping him over using his neck then stomps on his chest.

Jey comes in to attempt at destroying Madcap, but he charges at Moss at the turnbuckles and nobody is home as he hits the post because Jey jumped too high.

The twins continue with that momentum by throwing Montez into the timekeeper’s area as he laid there like a lump. Unintentionally, of course.

Jimmy looks to tag Theory into this match, and Theory refuses as he takes his briefcase and starts waking away backwards. Luckily, Jey is there to ‘Super kick’ the bastard in the jaw for the rest of us to cackle at.

Montez eliminates everyone by jumping from the ring and land onto the others, yet there’s only Madcap and Theory left. As Moss gains the upper hand, Theory uses the easy way out by slamming his briefcase into Madcap causing the abrupt end of this match. Or so we thought.

Brock ‘Goddamn’ Lesnar is back on SmackDown, and he is raising havoc onto Theory. He had this cocky grin on his face as he stalked Theory outside the ring prior to entering it.

Theory thought his case would protect him from the beast, sadly it was nothing but a hallow shield. Brock descends upon Theory with harsh and hard ‘F-5’ moves, plus the usage of Mr. Money in the Bank’s case that would make a sinner cry. Dominating this entire conclusion of the night.