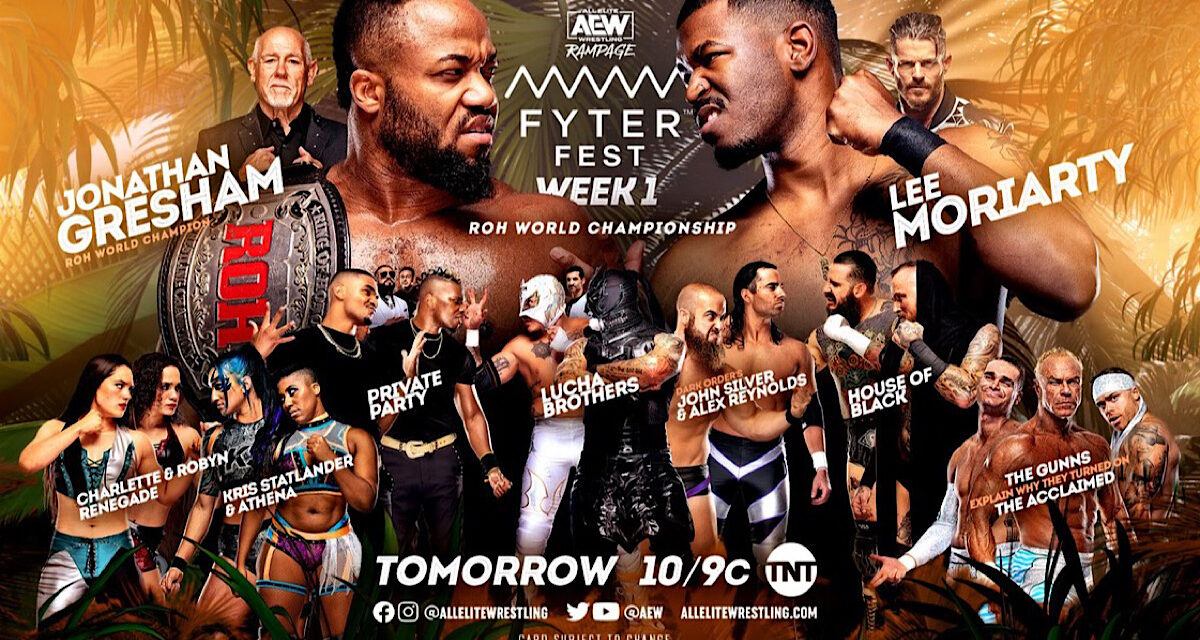 It’s Friday Night, and you know what that means?  No, not to plan a book tour nor Swerve in Our Glory.  It’s AEW Rampage and this show not has the House of Black spreading darkness everywhere, and Ring of Honor returning, there is a Private Party in the Main Event, and the guest are the Lucha Brothers are the guests of honor.

So let continue this night two of Fyter Fest at the EnMarket Arena in Savannah, GA.  It’s a milestone 50th(!) episode as Jim Ross, Excalibur, Chris Jericho, and Tony Schiavone have the call, and we head right to…

Again, remember when The Dark Order was the feared faction in All Elite Wrestling?  Pepperidge Farm remembers.  But this is not the case, as it is a a one side affair with The House on Reynolds, but “Johnny Hungiee” is in and going against the monster King is like watching Puck face off against Sasquatch (read Alpha Flight, ya nerds!).  Reynolds is back in and during Picture in Picture, The House is in control and show no signs of letting up.  Reynolds fights back and hot tags Silver and he is A Dark Order en Hambre (that means hungry in German).  Reynolds is back in But the numbers game catches up and Black and King use a double team combo in the form of a Black Mass/lariat combo to a Reynolds that gets a two count.  The Dark Order return the favor with a superkick/German suplex to King, but Black goes up top to dropkick King with distance to break the cover.  Black gets Silver with the Black Mass heel kick to send him out of the ring, and then feeds Reynolds to King for a gutwrench Piledriver  for the three count.

Your Winners via Pinfall:  The Kings of the Black Road

As the Kings walk back triumphant, Allin jumps King and they brawl to the back.  Meanwhile, Sting and Black have a stare down and neither man flinches.  But you know they’re spoiling for a fight down the road.

Are you there, God?  It’s me, Miro.  He asks if you would send the House of Black to redeem me, or recruit me?

“Should I let the pagans take me, or should I rip off their heads and tear out their spines?”#TheRedeemer Miro poses some important questions, after getting misted by the #HouseOfBlack. Watch #AEWRampage #FyterFest Night 2 on @tntdrama right pic.twitter.com/0bLdynSmbY

Caprice Coleman joins commentary because it’s time to get into a championship match, Taiga Style, for the…

(Authors Note:  You’re probably wondering why Gresham aligned himself with Blanchard and company, eh?  Well go back to Dale Plummer’s recap when I was away trying to start a gimmick as a beach bum in Redondo Beach, CA.)

Anywho, the Code of Honor is observed and Moriarty pounds away at Gresham, but the champ rolls out for a strategy session with Blanchard, and Moriarty follows and sends him to the guardrails.  Moriarty is in the drivers seat but it isn’t long before Gresham starts picking him apart.  Gresham tears some athletic tape off, and as the ref tosses it out, the champ pulls a Jeff Jarrett.  (Get it?  Slaps nuts?  Thenkyew and try the nachos!)

Gresham is back in control, and he is a weaving technical wizardry in the squared circle, but Moriarty fights back in Picture in Picture, but Gresham knocks him outside the ring, and as Sydal check his protégé, Gresham shoves him off and gets in his grill.  As they both argue, Moriarty  tosses him back in but the champ takes over and..

Ads (Just what in the fresh NDA hell?  Is it possible I can watch a match without a damned ad ruining the fun?!  Am I asking too much??!!)

Back to the ring (finally!), Gresham twists up Moriarty like a pretzel but he manages to escape his holds and landsa big kick to the champ’s mush, followed by a side suplex.  Moriarty follows with a Taiga Suplex to cover but that gets a two count.  The action picks up with Gresham nailing with a huracanrana for a two count, and it endgame as he follows wih the Octupus Stretch.  Moriarty tries to fight out but Gresham is relentless as he taps out so he stays on as champ.

Your Winner via Submission:  Jonathan Gresham

After the match, Schiavone gets  in the ring and Gresham confidently states he is the best pound for pound wrestler, and will break down all your favorites.  As Blanchard tries to pump up his man, Claudio Castagnoli came out for a stare down.  Honor Lives, indeed, and Gresham has a dance partner for the Death Before Dishonor PPV coming up this July 23rd

(Note to Tony Khan:  If you don’t reunite Castagnoli with his former Kings of Wrestling tag partner Chris Hero to corner for him, I worry about your priorities for ROH.  No pressure, though.)

Christopher Daniels  speaks about Death before Dishonor, directing his ire towards Jay Lethal, Sonjay Dutt, and Satnam Singh, but I’ll just let The Fallen Angel speak for himself…

And now for a palette cleanser, here’s…

Athena and Kris Statlander vs. Charlotte and Robyn Renegade

The Baddies are at ringside, but no Jade Cargill is in sight.  Where could she be?

As for the match, there’s two things to address:  First, The Renegades are what The Bella Twins would be like if you got them on the Wish app (OK, that may be a bit harsh, but in fairness I pulled up short of saying they’re Craigslist worthy.  So…progress.), and second, this says “squash match”, so enjoy this four ingredient double stuffed butternut squash recipe.

Your Winner via Pinfall:  Athena and Kris Statlander

After the match, a Baddie in Training (a BIT if you will) named Leila Grey get on the ring apron to badmouth Athena.  She and Statlander turn to teach her some manners, and now Cargill and Kiera Hogan sprint from backstage.  They level the playing field, and the TBS champion proves why she is the Head Baddie, while she straightens out the mess that is Grey, while Athena Statlander glare on.

Lexi Nair is with Moriarty and Sydal backstage after the championship loss about his next move.  Before he can respond, Stokey Carmichael pops up to ask what Moriarty needs to get to the next level, and gives him his card to really represent him.  Sydal steps in and tears up the card, and says to his protégé that next week he will face Dante Martin for a straight up competition with no cheating.  Martin comes in and the man himself says it’s about peace, love, and pro wrestling.

Tony Schiavone is with The Gunn Club about why they turned on The Acclaimed.  Billy says simply that “Daddy A$$” had to drop the hammer.

“There just comes a time when Daddy Ass has to drop the hammer”
The #GunnClub and #TheAcclaimed sort out their differences here on #AEWRampage #FyterFest Night 2 on @tntdrama! pic.twitter.com/2gUOGgoMEB

Just as I pondered that sentence, Bowens and Caster come out spoiling for a fight, and Billy tired to make peace to scissor him, but they they just brawl away, and all the Gunns scurry off.  The Acclaimed want a match, and Austin says they’ll grant him one…psyche!  Oh, it’s on @$$ boys (Again, another phrase I thought I’d never utter, but here we are).

Mark Henry is backstage with Private Party and The Lucha Brothers with their final thoughts.  Andrade El Idolo is representing the Party because he is a businessman, but Kassidy and Quen just want to throw down.  Penta and Fenix say (via Alex Abrahantes) they will take them into darkness because they’re just pieces of trash.

Well, looks like there’s been enough talk and it’s time for the Main Event…

The Lucha Brothers (with Alex Abrahantes )vs. Private Party (Marq Quen and Isiah Kassidy, with Andrade El Idolo and José The Assistant)

During the introductions, El Idolo and Jose bring the stolen masks of Penta and Fenix to add fuel to the fire.  As the bell ring, Kassidy starts against Penta to prove he has Cero Miedo, and drives him to the Party corner.  Private Party in control and out lucha the Bros, but Fenix gets a rolling cutter to Quen for a two count.  Quen is double teamed by the Bros, but the Party does their Silly String double team to get back in the ring to plant a DDT to Penta for a two count.

During Picture in Picture, Penta is an Oscuro en Peril, and he gets sent outside for E Idolo to add injury to insult.  Private Party keeps Penta isolated until he gets a sling blade and then a hot tag to Fenix and he is an Animo en Fuego , chopping away at Kassidy.  But Quen sneaks up to Fenix for an electric chair to a crossbody pin that gets a two count.  They keep Fenix grounded in the corner, but he gets back to Penta and he gets a DVD to Kassidy in corner, and then the Made in Japan secures a pin, but the ref counts for two.

It becomes pandemonium as Jose gets on top, and Abrahantes gets him off the apron to a slug fight.  As the ref tried to get control outside, El Idolo is on top and Penta knocks him down.  Now Rush runs out to help his La Facción familia to knock out Penta to feed Quen, but he reverses to a Mexican Destroyer and Fenix tags back in with the BlackFire Driver to Quen as he pins for the one, two, and three.

After all of that, the #LuchaBrothers manage to score the win and #PrivateParty and Andrade El Idolo are visibly frustrated by the outcome here in this main event! What a night of action on #AEWRampage #FyterFest Night 2! pic.twitter.com/0oUAEVd7qF

Your Winners via Pinfall:  The Lucha Bros.

The Lucha Bros are happy to spoil the Party, as they remain triumphant as the show fades to black.

A jam packed episode, with the highlight being the Lucha Bros, showcasing why the tag division in AEW is tops compared to other promotions.  The Gresham/Moriarty match was also fun (and would’ve been better if positioned differently on the card) but it sets the stage with the OG Castagnoli and Gresham for the Death Before Dishonor PPV.

The rest?  Just meh, but for an hour show I won’t complain much.