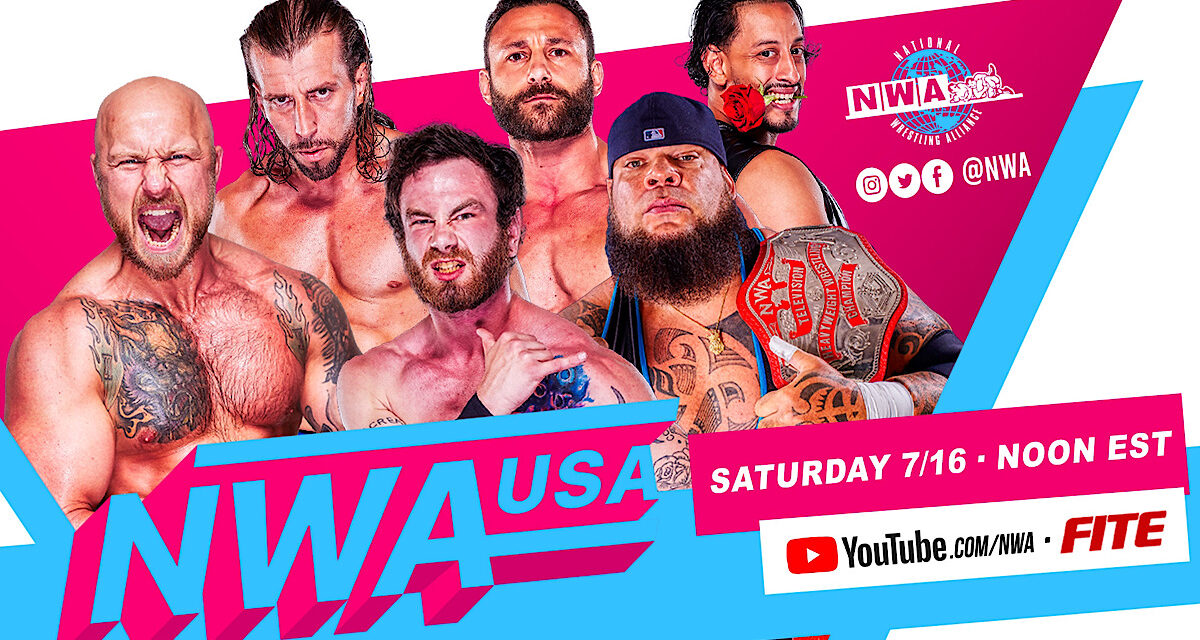 On this episode of NWA USA, Luke Hawx has a mind for revenge, and he wants Colby Corino in the worst way possible.  Also, we have some junior heavyweight action, and reports of Tyrus throwing his weight around .

We go right to the ring at the Skyway Studios in Nashville, TN.  Joe Galli, Velvet Sky, and Austin Idol have the call for triple threat action with… 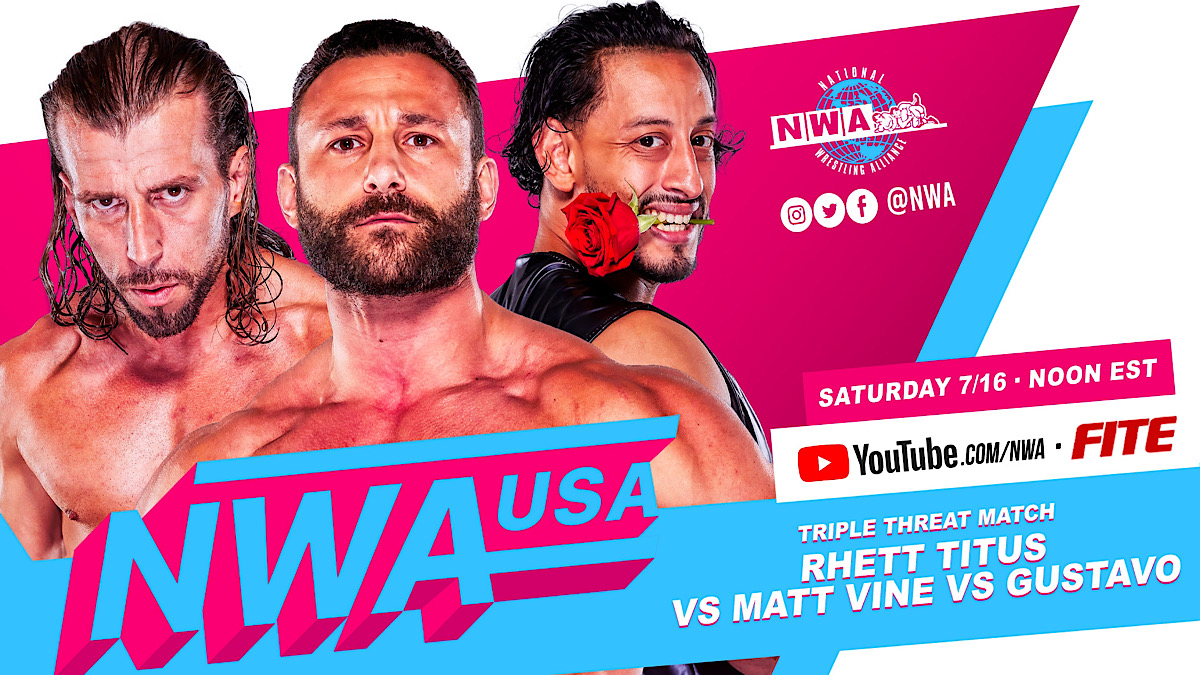 Vine has been on the PowerrrTrip shows and has an shown impressive strength.  Titus and Aguilar are familiar with the NWA fans from before, and this show looks like a barn burner.  The show starts hot with Titus is in control throughout but Vine is making a case for belonging in the Junior Heavyweight division, as he uses Aguilar as a weapon to slam on Titus to pin for a two count.  Vine follows up by getting both Titus and Aguilar in a double chinlock.

The tables are turned as Aguilar and Titus double team with a back suplex, and then an ankle lock by Titus while Aguilar gets a camel clutch.  Titus then gets Aguilar in a dragon sleeper, ending that partnership, but Vine sneaks behind and gets a back suplex and then a superkick to Aguilar knocks him out.  Vine covers but Titus breaks the hold.  Vine shovesThe Professional to the corner, and Titus kicks him away and he skins the cat to climb up top for a crossbody.  Titus goes to pin Vine, but it’s  reverses and Vine gets two count.  The end had Aguilar trying a Sliced Bread , but Titus catches him and he uses Latin Lover’s feet to knock out Vine and he slams Aguilar to the mat.  Titus then props him to a bridge move to get the pin.

May Valentine is backstage with VSK and Chelsea Green.  Valentine addresses VSK’s loss for the Junior Heavyweight title before going to Green.  She acknowledges that Billy Corgan is living up to his word and granting The Cardonas title shots, and when she faces Kamille for The Burke, everyone will know that Green is money.

Jamie Stanley with another Stanley’s Drill and his guest is…Gaagz The Gymp.

Yeah this goes about as well as you expect.  How well, you ask?  Imagine if Orange Cassidy became hellbent for leather.

There you go.  Enjoy the nightmare fuel.

Even Stanley is done with the segment as he walks away. 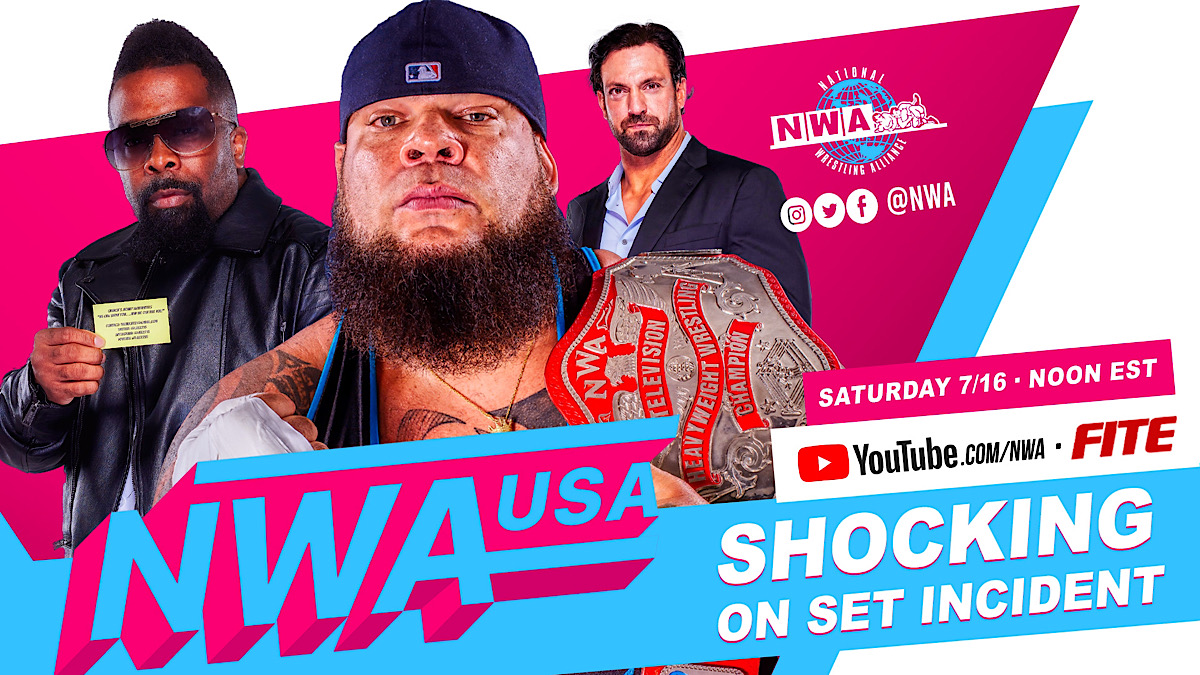 Galli addresses an incident backstage provided by the mother of KC Roxx.  From the camera footage, Tyrus and BLK Jeez come out to Aaron Stevens and KC Roxx training in the ring.  Tyrus comes in goes chest to chest with the diminutive Roxx, and the Man-ster just choke slams The life out of him.  His mom comes in to help her son, and she wants to press charges, and Tyrus and Jeez walk off.

Stevens is…trying to help(?), but Roxx’s mom tell him to head out.

The moral of the story:  maybe Tyrus should avoid camera phones?  I dunno.

Some clips from the fallout of this NWA POWERRR, but read it here to catch up.

May Valentine talks to Jennacide about the dearth of title opportunities.  Natalya Markova and Taya Valkyrie get the shots, but not her.  But she is focuses on getting the Burke one day, and will do it the right way.

But now we head to The Main Event with… 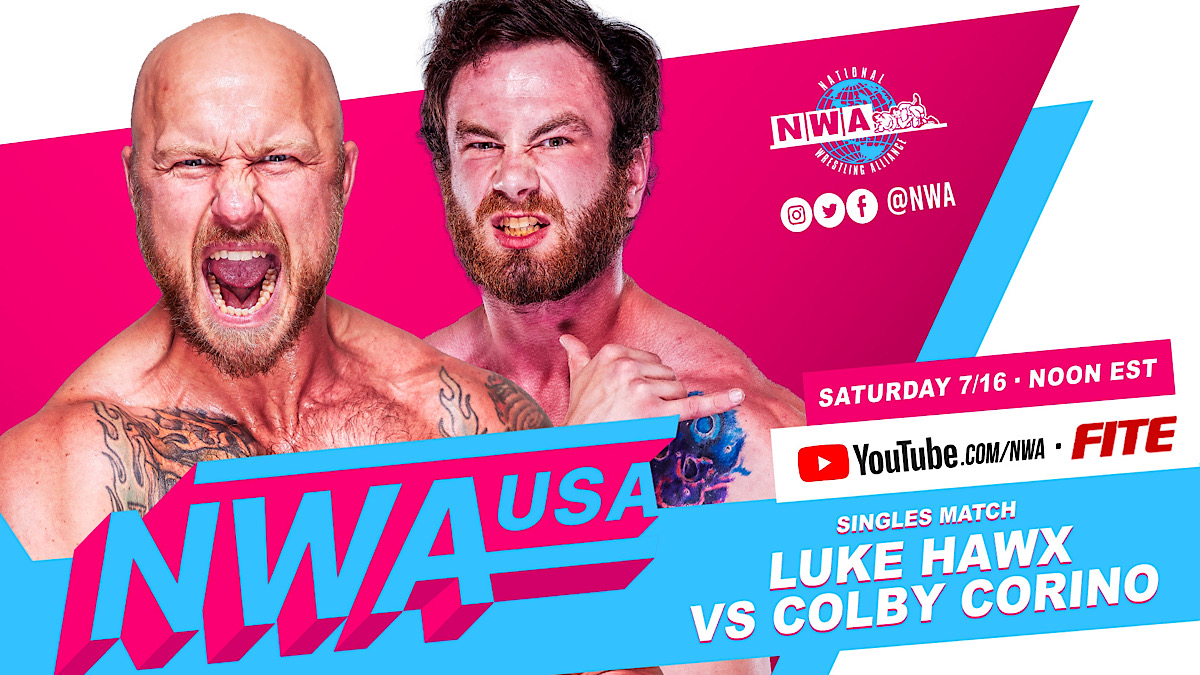 No time for subtlety’s, as Hawx is laser focused once the bell rings and he locks up and shoves Corino to the corner.  Corino scoots out of the ring but Hawx gives chase and catches him in the ring with a flying shoulder tackle, followed by a belly to belly suplex.  Hawx stays on offense but Corino rakes the eyes and gives him a neckbreaker to cover for a two count.

Corino is now in control and gets an Olympic Slam.   He tries to follow with the Corino Crush, but Hawx evades the signature move and Corino eats canvass.  Hawx rains elbow drops and sends to corner.  Hawx follows but eats a back elbow and Hawx returns with a spin kick.  A pump handleslam gets Hawx a two count.  Hetries to put away The Last Bastion but can’t get it done.  Hawx sends him to the corner, but Corino drop toe holds him into the bottom turnbuckle.  He stomps away at Hawx, followed by a cannonball to the corner.  Corino set Hawx in position for a crossbody, but is caught in a backbreaker/shoulderbreaker into a powerslam combo.  Hawx cover, but still gets only a two count.

Now the action spills outside as Corino tries a slingshot spear to the outside, but gets dumped to the concrete floor by Hawx.  They brawl on the outside, and barely get in the ring before the ten count.  Corino backs into the corner, and Hawx is fired up still.  The ref tries to back him up, and Corino uses the time to get a foreign object to clock Hawx in the head behind the ref’s back.  He stashes the evidence and gets Hawx in the Sonsetter finisher to pin for the one, two, and three.

The Last Bastion gets the last laugh as the show goes to credits.

Both matches nicely bookended this NWA USA.  The camera footage segment was…meh.  It didn’t add anything but it didn’t distract either.

Corino was the star of the show, as he escapes his comeuppance…for now.