It’s a Race to the Chase on this NWA POWERRR 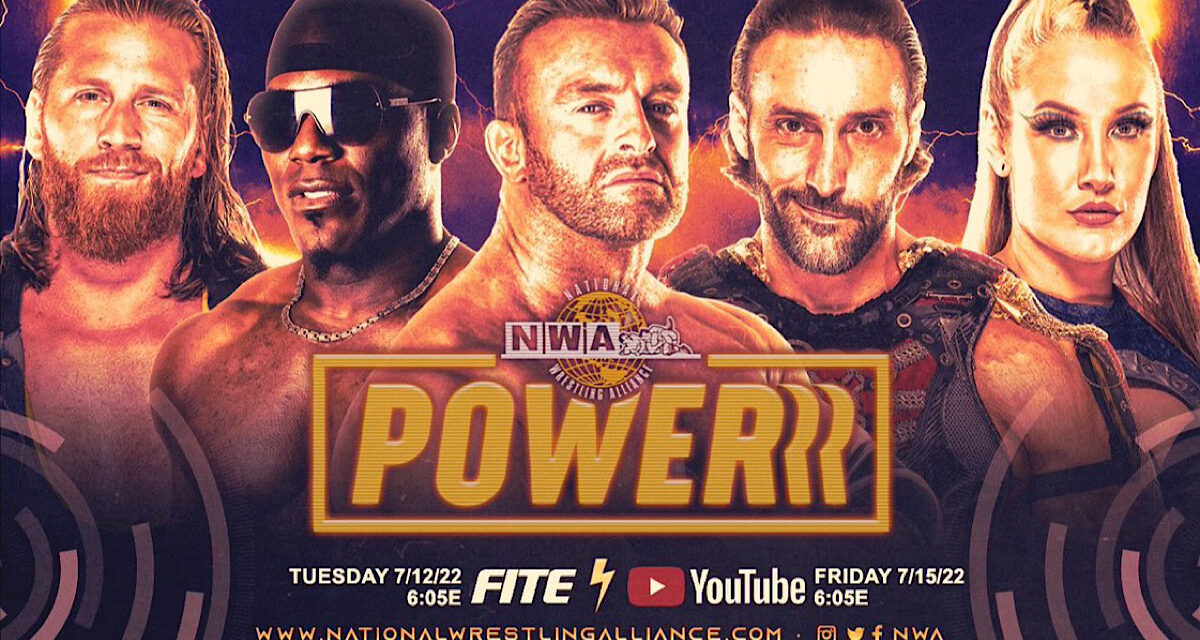 The Race to the Chase begins tonight on a star studded episode of NWA Powerrr, and it’s anyones game on who will vie for the Ten Pounds of Gold.  Four men are battling it out with the winner having the chance to challenge the current NWA Worlds Heavyweight Champion Trevor Murdoch at the NWA 74 pay-per-view.

It’s anybody game in the National Wrestling Alliance, and as we head to the Skyway Studios in Nashville, TN. Where Joe Galli, Velvet Sky, and (yawn) Austin Idol have the call, as we dive headway into the First Match of the Night for the… 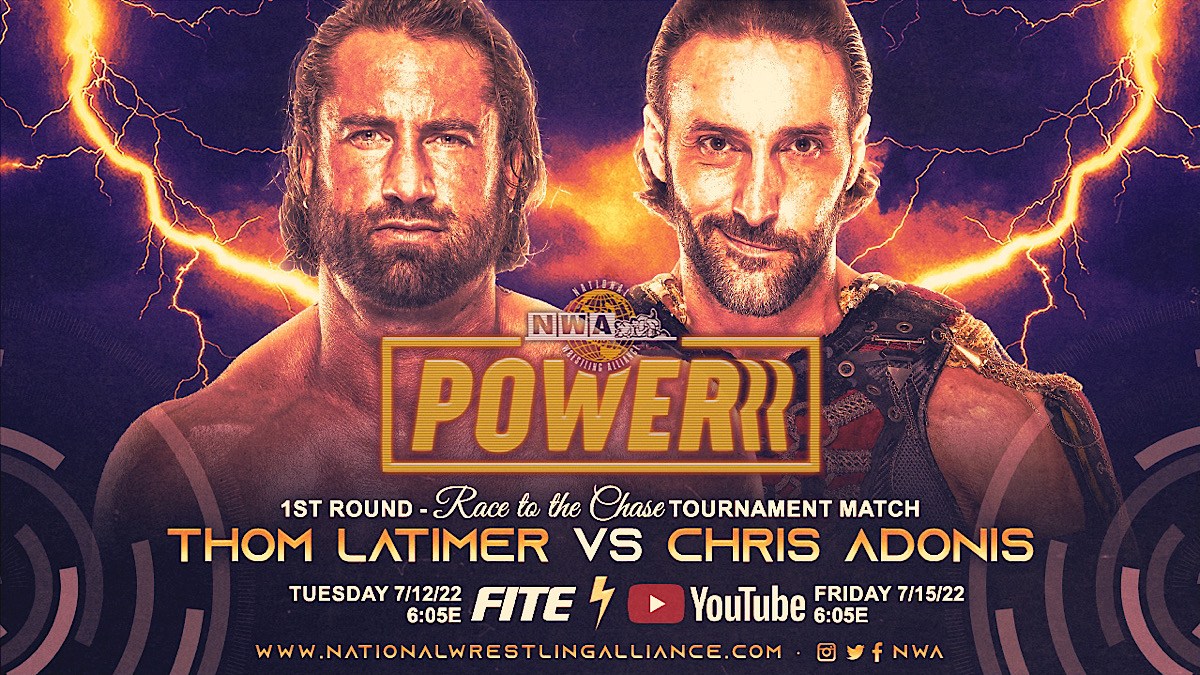 (Author’s Warning:  if you’re new to the show or the recaps, it’s real simple.  Stay for the match breakdown, and eliminate the commentary with Sky/Idol. Jim Ross and Jerry “The King” Lawler, they ain’t!)

As the former Strictly Business stablemates shake hands, the bell rings and then they get straight to business, if you will.  Both men are evenly matched from a power standpoint, and they trade hold for hold with neither having the advantage.  At one point, they exchange pleasantries and then Latimer gets back to business with a shoulder tackle to the corner followed by a European uppercut to a back elbow to cover for a two count.  The King of All Evil keeps up on offense with a back suplex for another two count.  Latimer cinches in with a chinlock, but Adonis fights up to a vertical base and Latimer hits the ropes and is caught in a Samoan drop.  Now Adonis lands with an atomic drop into a shoulder tackle, and he shoots him to the ropes to a spinebuster for another two count.  Latimer nails with a spear, and sets up for a Piledriver, but Adonis reverses to a back body drop but can’t cover right away.  He goes for the Masterlock, but Latimer escapes and gets a pop up powerbomb to punch his ticket to The Chase.

Thom Latimer is now in the tournament and faces Mike Knox next week, as a result of a bye he received

Speaking of, Knox is at The Podium with Kyle Davis and he got in because he got a kink in his back from slamming Bully Ray into a table (dude use your knees).  This is happening because Cardona give up the title, and everyone gets what they want.  As for Bully Ray, he cannot stand him, and he sees him everywhere…like in Kyle Davis.  Before anything can happen, he says he has issues with Bully Ray, and this is not even over.

Okay, message received.  Wonder if Bully Ray got the memo?

Kerry Morton is backstage with May Valentine about Homicide’s offer to face him at NWA 74 to challenge for the NWA Junior Heavyweight title.  Morton talks about how it was a belt his dad held, and he wants to keep up the prestige and earn that opportunity.   The Future Legend is certainly fired up for the opportunity if Homicide can still keep up his winning ways.

And now for Bob Kapur’s Favorite Wrestler™ in another… 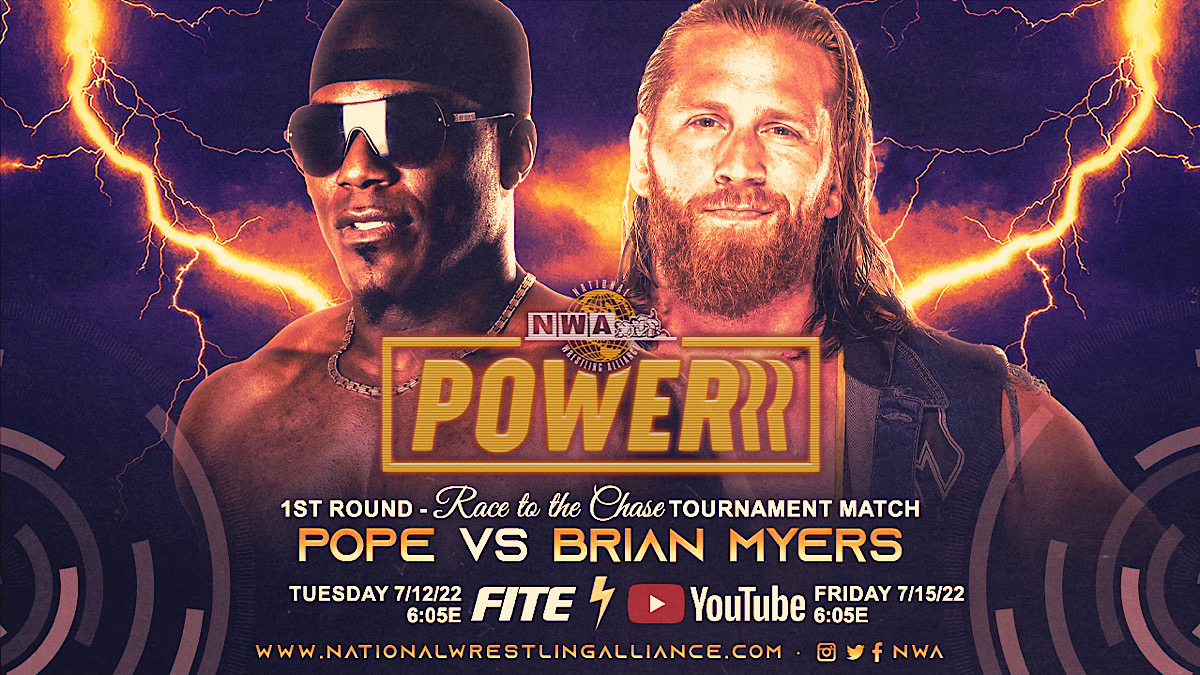 Pope has been out of action for a few weeks, but the fans are solidly behind him because (ugh) Brian Myers.  Pope has the early advantage outwrestling Myers, and he gets a hip toss to a back elbow to an atomic drop to a fist drop for a two count.  Myers sends Pope to the ropes until the ref calls for a break, and then he yanks him hard neck first in the ring and now Myers is in control.  Myers keeps Pope grounded, but he fights up and gets an inside cradle for a two count.  Now Pope gets an atomic drop to a legsweep  to a leg roll up for two count.  Myers gets a step up enzugiri to a flatliner for a two count, and then backs up for a spear but Pope gets a DDT to cover for a close two count, and he’s perplexed that wasn’t three.  Myers back him to a corner and put the badmouth on him and the Golden Gloves boxer works the heavy bag to show some respect to Bob Kapur’s Favorite Wrestler(TM). As Pope backs up, Myers rolls him up and uses the ropes as leverage away from the refs vantage point for the cheap win.

Your Winner via Pinfall:  Brian Myers

May Valentine is with Tyrus and BLK Jeez and Jordan Clearwater, and she butters up Tyrus a bit, but Jeez is all about business and tells him to focus on Odinson.  Tyrus ain’t sweating because he reminds everyone what happened to the last number one contender for his belt.  Clearwater says they’re all about the Gold and gives all the sweat hogs what they’re been clamoring for.

What?  Is that copyrighted?  How Rude, indeed!

But let’s get to the women’s action in … 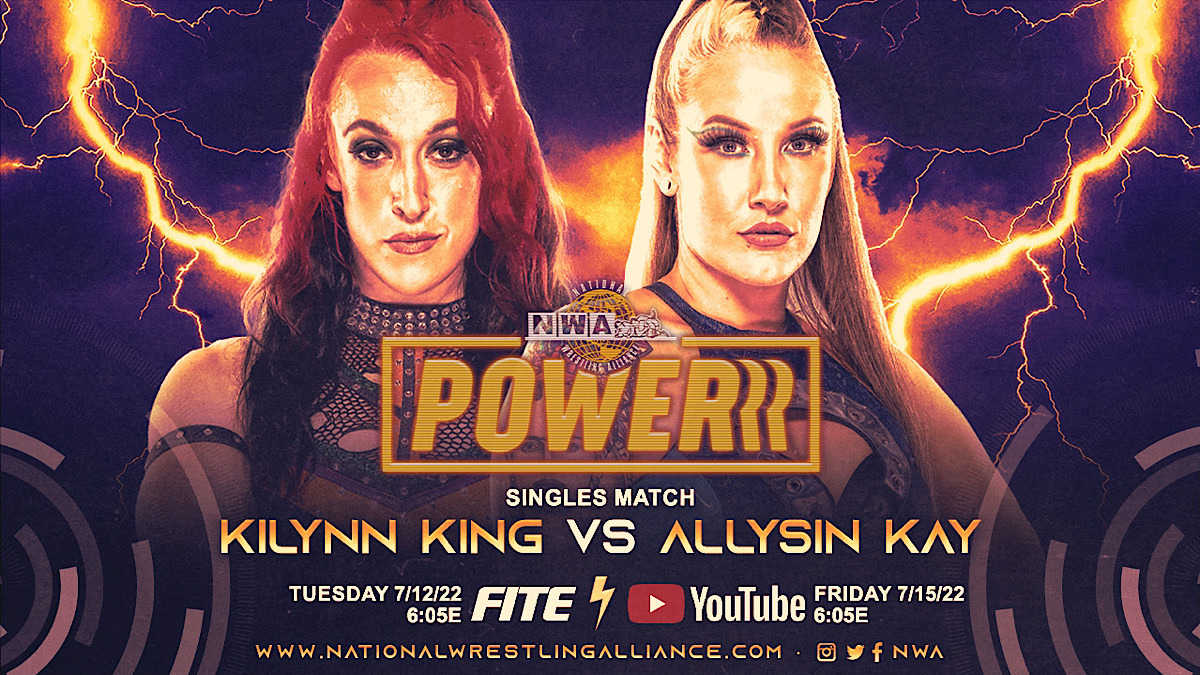 This match came about because both women laid claim to being next in line to The Burke, and kig is the gatekeeper.  Either way, it’s good to see Kay in singles action.

Kay gets the offense early on but King fights back.  The former women’s world champion gets a stun gun to a clothesline on King for a two count.  Kay chops away at the corner, and she gets King in a spinebuster for two count.  She transitions to a single leg crab, but King gets the ropes and Kay stay on top and slugs away.  Kay shoulder tackles in the corner, and then sends to the ropes but both women get a double clothesline and now it’s a race to who gets back up first.

They fire forearms at each other, and Kay gets a roundhouse kick that misses, but connects the second time around.She runs into a back elbow, and slingshots Alayna to a snap German suplex to stack up for a two count.  King keep trying to stack up to a pin but cannot get the job done.  She goes up the top turnbuckle, but Kay catches to an AK47, but King escapes but is caught into a reverse tombstone piledriver, but King kicks out at the last second.  Kay goes for the single leg crab once again, but King fights out and the Excali-buster finisher to get the win.

Your Winner via Pinfall:  KiLynn King

Kyle Davis is at The Podium as King saddles up, and he I nquires why she is the gatekeeper in the NWA, and King reveals she the advice she was given needs to be in striking distance for the title.  King says it’s based on advice she got from the same man that trained Kamille himself:  Bully Ray.  Davis has more question, but is told by the back that they have to go to break.

I have questions, too, but hat will have o be another day.

There’s recaps of the last NWA USA offering, but read the action here to get caught up..

May Valentine is with the champ, Trevor Murdoch.  Murdoch is a man of few words tonight and says he just righted a wrong with Tim Storm’s ban on the shot at the Ten Pounds of Gold, because he knew it was the right thing to do.  But for who he wants to face, it don’t matter, since Murdoch says they’re going to hell and back with the champ.

Now for the Main Event, and it is the final… 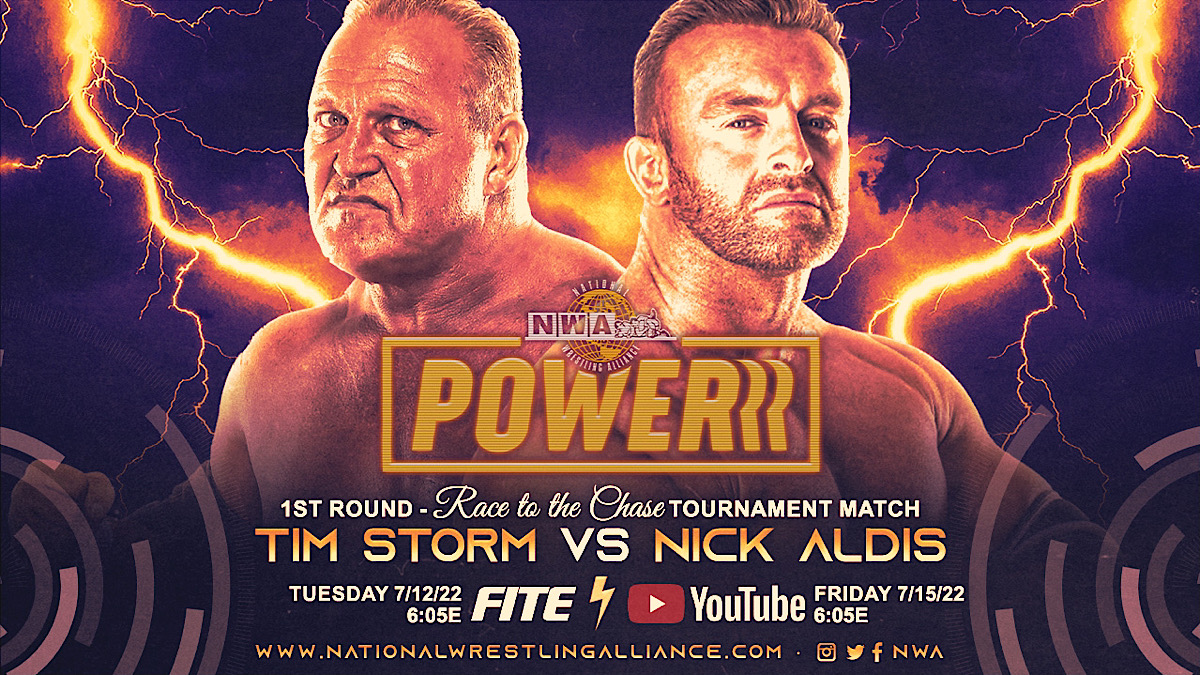 Storm looks motivated in this match, as both men exchange handshakes in the ring and the rivalry for the Ten Pounds of Gold picks up from where it was left off before the pandemic.  There is a feeling-out process, but Storm is able to take it to Aldis with a scoop into a slam and he sends him to the corner, but Aldis escapes and he paintbrushes him.  Storm is hot from that slap, but Aldis offers his hand (in true sportsmanlike conduct in apology), and The National Treasure comes with another slap and now he is living rent-free in Storm’s head.

Storm goes after him, and Aldis whips him to the ring post.  Aldis sends him back to the ring and gets an axe handle to his back and transitions to a suplex for a two count.  Aldis wears down with knees to the back of Momma Storms Barb Boy.  Storm tries to fight back but Aldis gets him in a sleeper but it’s reversed to a back suplex.  Storm is now on offense with a neckbreaker and then a big boot, and Aldis slaps him a third time and he mounts him with punches for the disrespect he’s received throughout the match.  The ref pulls Storm off and he sends The Dealer to the ropes, but Aldis gets a DDT and then goes up top to an elbow drop to the back to add more injury.  He follows up into the Kingslayer cloverleaf, and Storm fights through the pain to get the bottom ropes to break the hold.

Storm gets The Perfect Storm finisher, but takes too long to cover because Aldis kicks out at two.  Storm goes back on offense and whips Aldis to the ropes.  He reverses and Storm accidentally runs into the referee.  Storm gets the Perfect Storm again, but no one is there to count.  Aldis slaps him for the last time, and Storm loses his cool and lays in those haymakers to Aldis until the ref comes to and calls for the bell, because…

Your Winner via Disqualification:  Nick Aldis

The Dealer played a desperate hand that won out in the end.  Storm leaves the ring dejected by the loss, as the show goes to credits.

This was a great show from beginning to end, and well-paced throughout, with a nice cheer on top being the Storm/Aldis rivalry getting renewed for the Main Event.

While it would’ve been nice if they spaced out the matches for the Race to The Chase, I loved everything about this show.