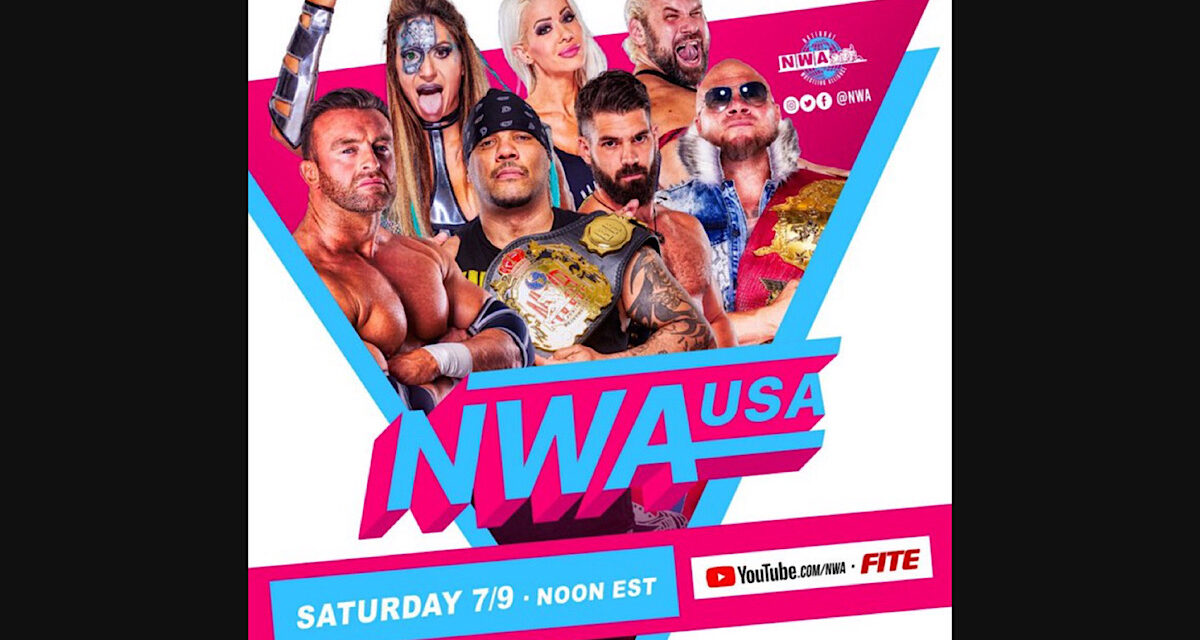 The National Wrestling is gearing up for a Race to the Chase, and not only is Nick Aldis going to talk about his upcoming match, we also have VSK stepping up to face Homicide for the NWA Junior Heavyweight title.  Will the member of The Cardonas make an example, or is The Notorious Legend able to fend off this latest challenge.

We’ll find out later as we jump right to the action at the Skyway Studios. Joe Galli, Tim Storm, and Velvet Sky have the call, and we go right into a non-title match with… 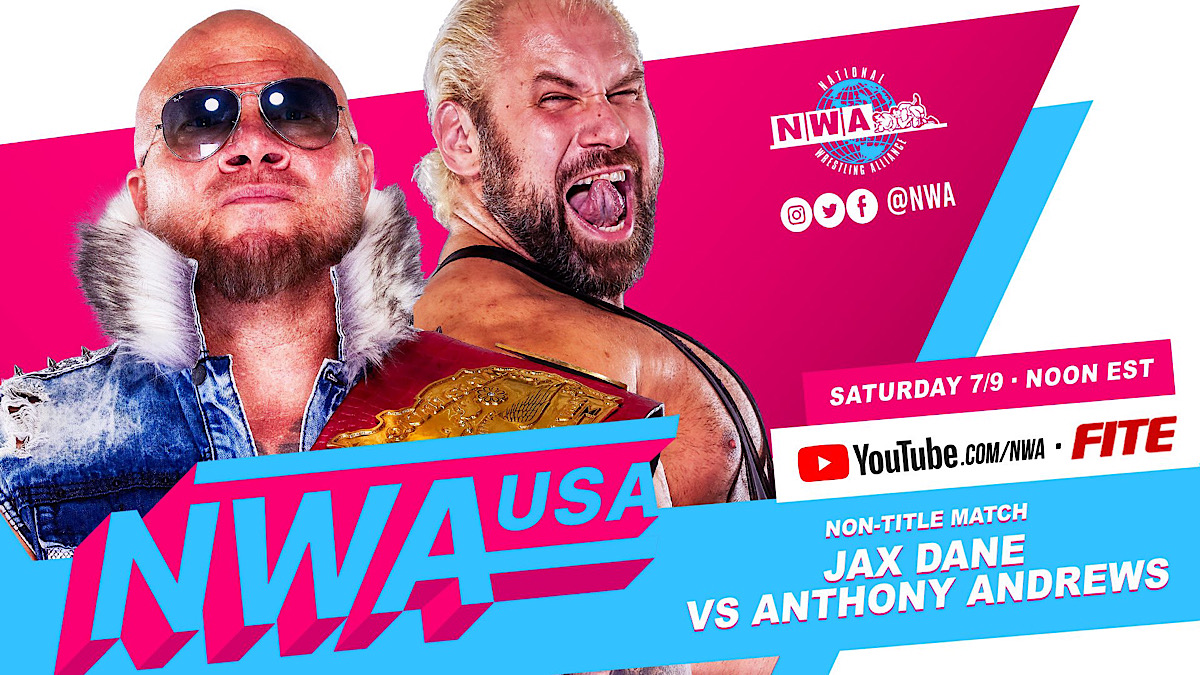 Dane puts the bad mouth to the The Country Gentleman and lays in the boots to Andrews,all without taking off the furry vest.  Andrews tries a splash in the corner but it’s reversed to a belly to back suplex, and gets a cocky cover for a two count.  Dane goes for a boot and Andrews side steps to where the champ gets crotched on the middle rope.  Andrews follows with a shoulder tackle, and Dane backs out of the ring  to take a powder.  The vest is off, and Dane finally gets to business with a Samoan Drop, followed by stomps to his leg.  Andrews fires back with knees to a choke slam but only gets a two count.  He sets up Dane on his shoulder but the champ pushes Andrews off, and he winds up and delivers The Dane Event, and that’s all she wrote.

After the match, Dane stares down Galli, and then he goes to The Podium, gets the vest back on, and walks off.  Okay that was…odd.

Joining at The Podium is Nick Aldis with Kyle Davis, and we’ll…let’s let him talk.

”Well, Kyle, let me start with this:  For the best part of five years, it has been my honor and privilege to represent the National Wrestling Alliance all around the world and to drag it into the 21st century for you fans. To restore the legacy and tradition of the greatest organization in professional wrestling history, the National Wrestling Alliance; to restore the prestige, the legacy, the tradition of the Ten Pounds of Gold, so that Harley Race, Ric Flair, Dory Funk, Jr., Jack Brisco, ‘The American Dream’ Dusty Rhodes could look at where it is today and be proud of what the NWA stands for in 2022.

I did that because I studied those men. I studied the greats that came before me and I try everything I can to embody the qualities of those men and it boils down to one simple thing; whether there’s ten people in the audience or 10,000, whether I’m in China, Australia, Japan, Mexico, Puerto Rico, Canada, England, these United States, even here in Music City…I tried to do everything I can to make sure that you people, make sure you know that when all is said and done, you believe in the NWA, and you believe that you got your money’s worth every single night.

But you’re right.   Lately [there’s] not a lot of time on Powerrr for the old National Treasure. So I did the best I could with NWA USA but you know, making something out of nothing; It’s kind of my thing. Kind of why you’re standing here right now looking very nice in this blazer that I hooked up for you. Kind of why everybody sitting here, right? Now, isn’t it making something out of nothing? And I’ve said it before Kyle, I’ll say it again. There’s a big ol’ roster, a loaded roster back there. A lot of guys filling their face with catering, a lot of guys getting free merch. Right?   A lot of guys back there that wrestle. A lot of guys that can talk.   A lot of guys that can fight.   A lot of guys that can put it all together just like Nick Aldis, and that is not my opinion. That’s a cold hard fact. But I’ll tell you what. There is one thing that I’ve never really been very good at, and there’s a whole lot of guys back there that are really good at it. I mean, really good; like world class. And that’s kissing Billy Corgan’s @$$. These guys are phenomenal at that. And that’s why you might see a little more TV time than you might expect for some of these guys compared to Nick Aldis  but they have to know deep down that whatever the case, I will forever be the measuring stick in the NWA, and I will do everything I can. I will outwrestle, outfight, out-talk and outthink everybody back there until I’m the rightful Real World’s champion. Again.”

Yes, Virginia…his work on the mic is truly a National Treasure.

May Valentine is backstage with “Magic” Jake Dumas and CJ, and he makes magic happen, and he makes money appear like Magic.  As for his relationship with CJ, it’s no one’s business.  As Valentine turns to CJ, the Brazilian Wonder Woman converses in their native language.  I do not know what is said, but I’m imagining it’s gossip about Rio and why Valentine and Stevens missed the fight.  But Dumas is so sick of it, her disappears from the segment.  Just like magic.

But now let’s turn to… 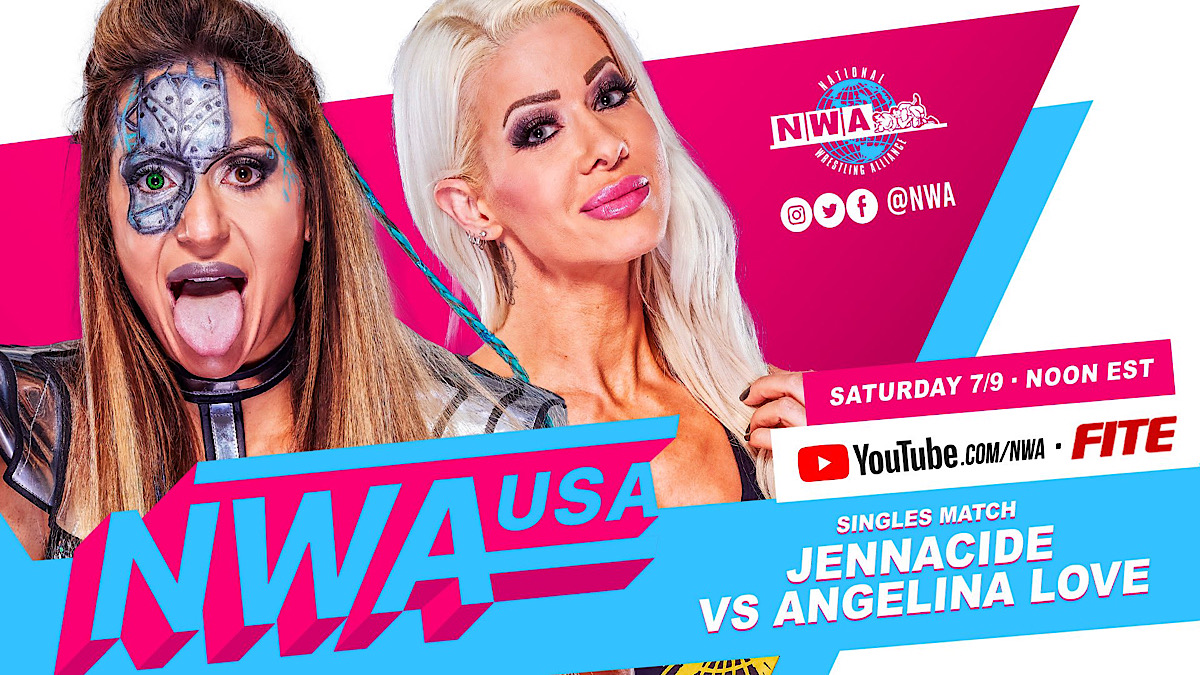 Sky gushes over her former Beautiful People tag partner facing The Bionic Beast.  Right away, this is a straight power versus technical savvy, and power takes the lead with a big Bionic right hand to Love to get a one count.  Jennacide keeps up the offense with an electric chair, but Love goes for a Victory Roll for a two count.  Love goes up top for a crossbody but gets caught by the Cyborg, and Jennacide hits a nice fallaway slam, and Love rolls out.  Love goes to Sky to get help, but Sky. Just tied to pump her up to get back in the ring.  She tries to plead her case, and gets counted out in the process, so therefore…

Your Winner via Countout:  Jennacide

After the match, Rush Freeman and his “big brother “ come to the Podium and calls out Trevor Murdoch because he is insane.  No, really those were his words.  he wants to face Murdoch next week on NWA POWERRR for a match for messing with his “little brother.”

No dispute from me here as it sounds like he made a death wish.  But, hey…family values.

Backstage is Hawx Aerie with May Valentine.  She addresses Luke’s anger on Colby Corino and Homicide, and Luke says like The Hulk, he’s always angry.  He will unleash it the next time he sees Corino for putting the hit out on his son on the Alwayz Ready PPV.  Oh, yeah, I can’t want for that matchup.

That Dude Jamie Stanley is out for Stanley’s Drill (get it?  Like the tool?) for Mercurio.  The question and answer is nothing, but the cuts where Stanley’s expressions have him reacting to Mercurio’s  are priceless.  It’s a himbo hoedown between the two men, and I love it.

There’s a recap of Corgan making an executive decision for the Race to the Chase, and other matches, but really read it here to catch up.

May Valentine is with Kamille, and she asks the holder of The Burke aboutKiLynn Kings accusations of her as a gatekeeper for the Women’s division.  She respects King, but doesn’t need anyones help to gatekeep anyone.  She does have her eye on King as a challenger, and also, there is no breaking down The Brickhouse.  Strong words from the one-time champion.

But let’s get to the Main Event, and it’s for the… 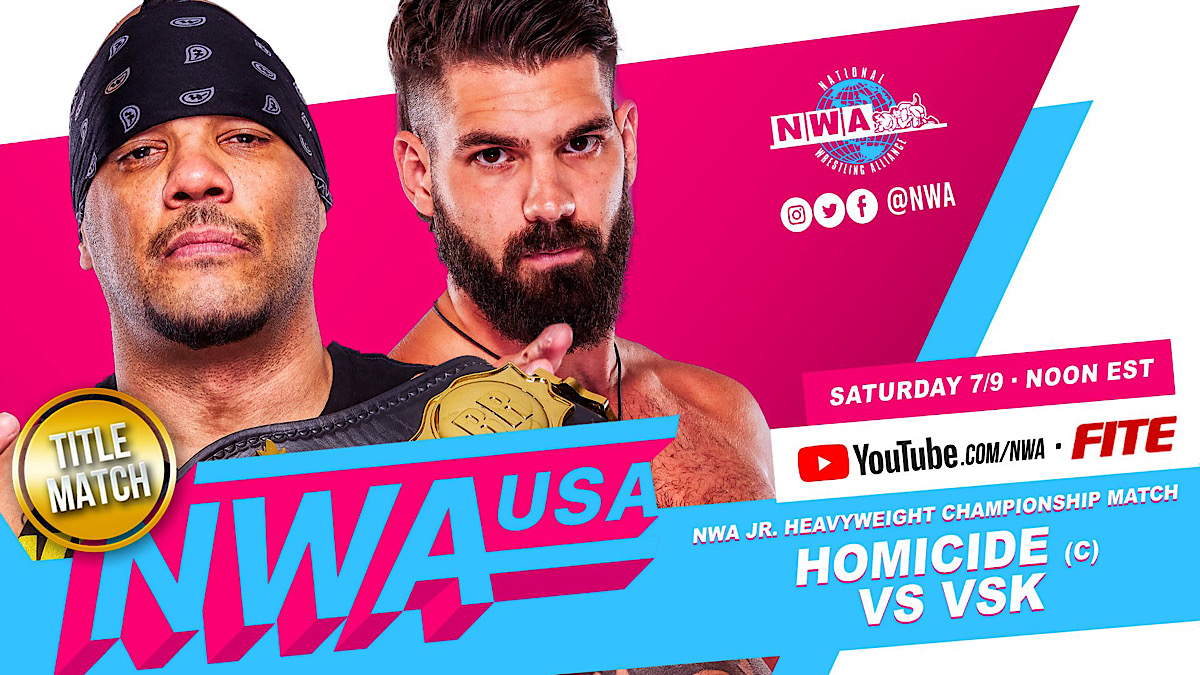 The bell rings, and there is a good back and forth between the two men as they feel each other out in the ring.  VSK backs up Homicide, and the ref breaks up the hold, but VSK clocks him square on the jaw.  VSK wears down the champ, but Homicide gets a step toe hold to a hat trick of atomic drops.  Homicide bends his leg but VSK sends him out of the ring, and gets a dropkick to Homicide on the outside and then a running leg drop to cover for a two count.

Now both men are trading blows and Homicide gets a backslider for a two count, and VSK gets a scoop slam to a mini splash for a two count.  VSK nails the champ with knee drops to the jaw to cover gets another two count, and Homicide says he’s number one…in his own way.  Homicide is caught in a tilt-a-whirl backbreaker and VSK covers for a two count, and he’s starting to get frustrated.  VSK tries another scoop slam to a splash, but Homicide gets his knees up to his sternum, and he follows up with an exploder suplex for a two count.  He set up for a powerbomb, but VSK reverses to a huracanrana into the corner and gets a facewash to the Notorious Legend.  VSK is back in control and he gets Homicide on his shoulders, but the wily veteran claws his eyes and cinches in deep a sleeper hold, but VSK gets a back suplex to escape the submission.  Homicide comes back with a tiger driver gets the one, two…oh, so close.  He sets VSK up top for the Koji Cutter but is pushed off.  Now VSK  goes for a Swanton but misses, and Homicide nails the cutter for the one, two…oh, just barely.  Homicide goes back up top and now delivers the avalanche Koji Cutter to put away the upstart for the one, two, and three.

Homicide looks at the camera and says, “Terry…this is for you!” as the show rolls to credits.

Two things that are gold on this show:  the Main Event with Homicide, and Nick Aldis on the mic.  The NWA USA is becoming quite the show to watch, and if they keep doing this type of show, this will continue to hit it out of the park every time.

Only one gripe:  Dane not defending the NWA National title, but hopefully they’ll rectify that down the road with other viable challengers.