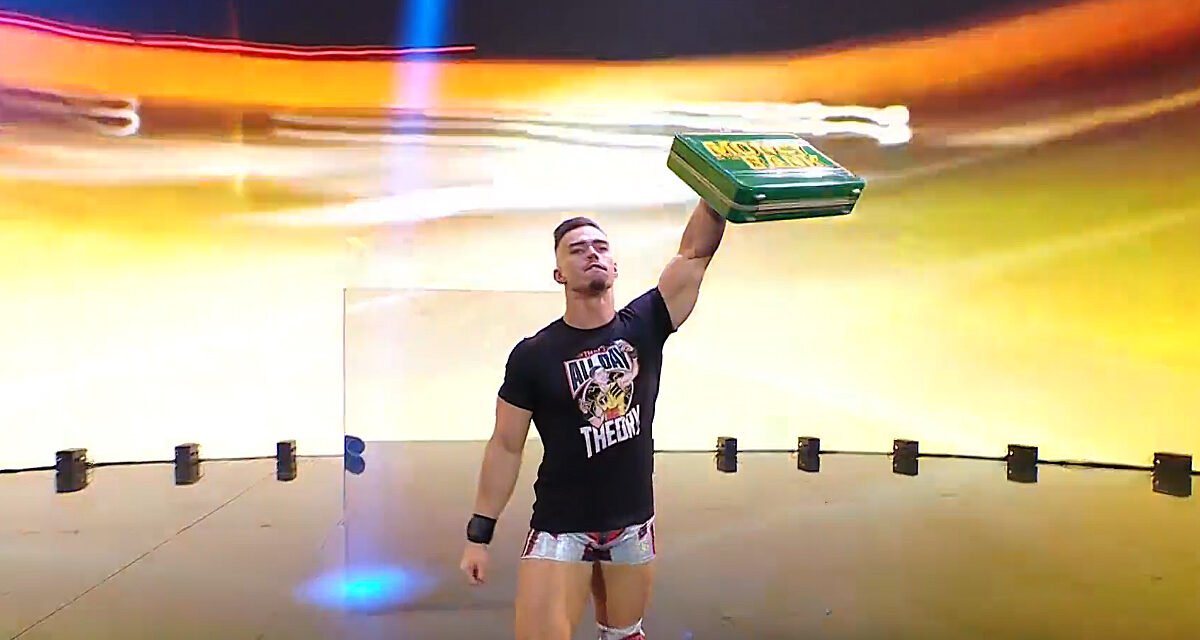 The Bloodline arrive on SmackDown with all the gold still in their possession. Roman Reigns has to defend his championship at SummerSlam against Brock Lesnar. As they bask in the cheers of the audience, The Bloodline haven’t noticed Theory’s presence near the entrance. Since he unfortunately won the men’s Money in the Bank event, I thought he might save his cash-in for Bobby Lashley, who was able to win the U.S. Championship back at Money in the Bank.

Anyway, Reigns is absolutely ecstatic being in Texas yet he notices Paul Heyman sulking. When I see Heyman sad, it makes me laugh so hard. The weasel mentions that he’s scared. Even though Roman is the ultimate wrestling champion, he still has to worry, or be concerned about Brock Lesnar’s return at SummerSlam. He can lose or he could win but both men also have to pay attention to Theory’s potential cash-in. Who is excited for that? I know I am.

Theory runs around the ring to rub his Money in the Bank win in even more. Roman isn’t sure what to make of the kid and his clowning around.

Now on to the brawling!

The Raiders are having their first official match since going dark on us. They truly look like they’ve experienced some shadowy things lately.

Ivar starts the match by pounding Mahal’s head then tags Erik in for a double pounding. Erik is now left inside the ring with Jinder as he attempts to get his opponent to tap out.

Mahal swiftly manages to escape with a kick to Erik’s jaw. He looks over to get Shanky, who is dancing in front of the announcement table. Due to Shanky’s inability to concentrate, Jinder get mauled by Erik and then the Raiders punch Shanky out as well.

The Vikings take Mahal and slam him in the middle of the ring from a noticeable height for the win.

New day appears with ass kicking tickets for the Vikings. They want to avenge the past two beatings they have received. Regrettably, New Day still couldn’t bulldoze the Raiders, instead Kofi and Xavier were crushed far harsher than before.

New Day needs to get their butts back in the game. Honestly. The Raiders “take what they want and give nothing back.” said Michael Cole

Pat McAfee isn’t in attendance tonight due to Happy Corbin’s sudden and brutal attack against him so Corey Graves is taking the helm this evening.

Anyway, Gunther has issued a challenge for the Intercontinental Championship. Anyone in the locker room can accept. Let’s see who it is.

Ludwig Kaiser’s voice is starting to become more infuriating than Heyman. My God. When has that happened? Such an odd shift.

Gunther talks to us for the first. Almost like Lesnar when Paul Heyman was his council. Lesnar never really spoke until he separated himself from the snake. He become more of his own person.

The challenger is none other than Shinsuke Nakamura.

Shinsuke instigates a fight against Kaiser instead.

Nakamura kicks and punches Kaiser into a corner, places him flatly on top the turnbuckles, runs and knees him in the stomach as Gunther watches with an angry look on his face.

Nakamura was dominating this match as he dodges a kick from Ludwig and gives him a kick to the side of the face. Shinsuke executed a Kinshasa and wins.

Michael Cole is in the ring with our champ for an interview. Even though Liv was happy for her win, Rousey could want a rematch.

Morgan worked as a waitress in the past to get to where she is now as a champion sports entertainer. Nattie shows up tonight to remind Morgan that the only way she won was because Nattie injured Rousey. That’s kind of true but it doesn’t make Morgan’s struggles any less important.

This match has been made official during the commercial break. I’m not complaining one bit. I do love abruptness when it comes to wrestling.

Ronda may not be at 100% because of her knee but she’s giving the same amount of hell, maybe more, to Natalya’s knee as well.

According to Michael Cole, it’s smart of Nattie to stay away from Rousey because once she has you, she doesn’t let go.

Ronda focuses her attacks on Natalya’s knee by grabbing her leg and smacking it against the ring apron. Nattie wails in pain while rolling on the mat.

Nattie takes another shot at limping away from this match but Ronda isn’t finished. She goes after her on the entryway and drags her back inside the ring.

Because Natalya said she enjoyed hurting Rousey’s knee last time, Ronda places her into multiple ankle holds to break her. Karma slapped Nattie in so many ways, it was amazing.

Ronda wins by further adding pressure to Nattie’s leg and ankle as she finally taps out.

Backstage, Drew McIntyre is interviewed about his upcoming match tonight against Sheamus. The winner of their match faces The Undisputed Universal Champion at Clash at the Castle.

For some reason, Max Dupri is back for another runway show. This time it is his tennis collection. I thought after last week’s strutting event, it was going to be over. Guess not. Well, at least Michael Cole is enthusiastic about it.

Ma.cé and Mån.sôõr are here to tickle our fancy and walk the runway to mostly boos.

By the way, if you want to become a Maximum Male Model, you can summit full body shots to their official website. Go ahead, have fun.

Theory has a talk with Kayla Braxton about his abrupt appearance when The Bloodline were in the ring.

Madcap Moss also appears saying he wants to shove the briefcase Theory is holding down his throat.

Lacey doesn’t like the response from the crowd even after coming out multiple times. She rips into the audience. They should respect her, her struggles and her story.

She knows she deserves more. She walks out on the match.

Aliyah wants an explanation but she wasn’t ready for Lacey’s Women’s Right to the jaw. Evans almost looked unhinged.

I’m not sure how I feel about that.

I haven’t seen Los Lotharios in a while. I can’t say I missed them.

Anyway, Jimmy starts the match with a chest slap to Humberto, but later gets distracted, so his opponent grabs him, pushes him towards Angel as he delivers a kick to Jimmy’s face.

Jey comes in after Angel has been tagged, yet he manages to get dragged under the ropes and double kicks as he falls off the apron.

After the pleasantries have subsided, Jimmy and Jey work together to slam Humberto.

Jimmy goes after Angel with a super kick to his face. It was a smacking sound so sharp I think I heard glass breaking. The way Jimmy shuffled his way towards Angel then walked away was so hilarious. Even Cory Graves found it amusing.

Angel does wake up in time to stop Jey from pinning Humberto then gives Jimmy a kick to his face. Angel gets another kick to the chest.

Humberto narrowly evaded a maneuver from Jey, but the twins shock us with a ‘One D’ move for the win.

Footage from last week’s match between the Usos and The Street Profits has shown that the win was a mistake as Ford’s shoulders weren’t down for the count. The Profits will have a rematch against the champ twins at SummerSlam.

There is no match as Butch goes right after McIntyre and tried to punch him into a corner but Drew retaliates with a suplex so crazy that it almost seems like Butch was going to fly into the crowd given how strong it looked.

Cole and Graves think it’s part of a plan to corner McIntyre when he least expects by the Brawling Brutes since Sheamus was supposed to be the one in this fight.

Ridge attempts to distract McIntyre then receives hard punch before hitting Butch with a neck breaker.

McIntyre wins by sending Butch on a trip to Claymore Country. That obviously upset Sheamus, so Holland unleashes some minor pain to Drew before he too is knocked out.

The scheme didn’t go as planned. Sheamus even says that McIntyre doesn’t have the guts to use his sword against him. Drew raises his sword and cuts the ropes as Sheamus quickly dodges while looking upon the Celtic warrior as if he were a ghost.