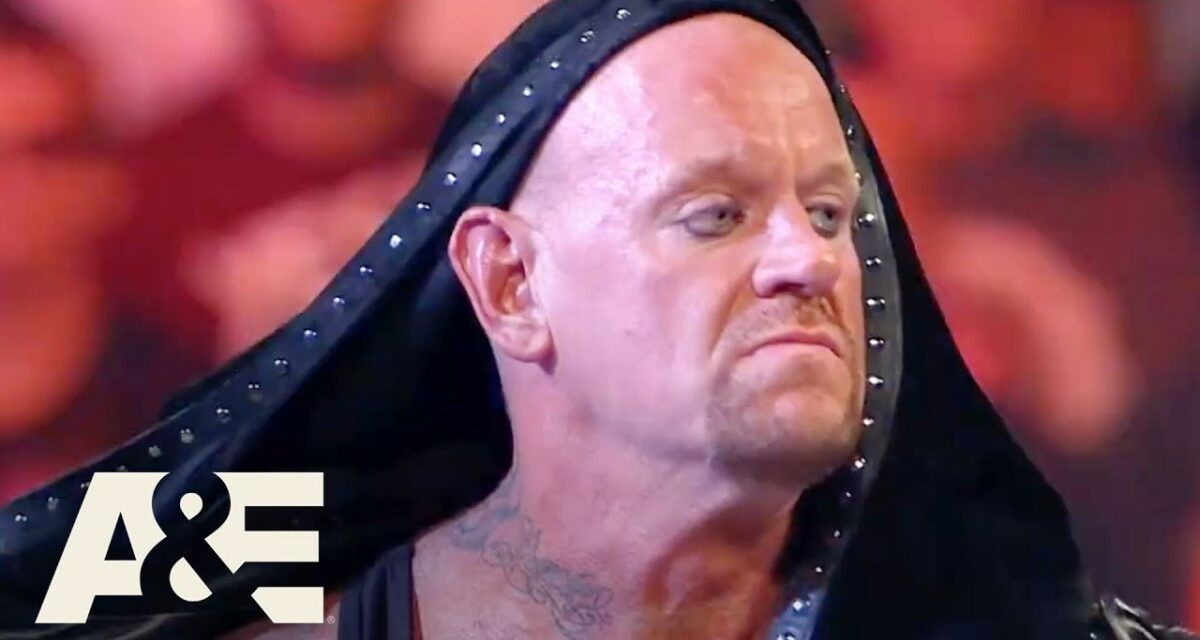 It’s the second season of A&E’s WWE-focused series of Biography episodes, beginning with The Undertaker. You can likely expect exactly what you got in the first season: a loving look at a series of WWE wrestlers whose stories are largely already well-known. This isn’t Dark Side of the Ring, after all.

Still, The Undertaker presents an interesting opportunity because, until the last few years, Mark Calaway has kept his personal life hidden from the fans in the interest of long-play kayfabe. With a recent string of shows and appearances on the WWE Network, Calaway has pulled back the curtain and shared stories of his career and life before wrestling and now Biography looks to see what else can be shared.

Beginning with a visit with his mom Catherine, Mark takes us on a tour of his hometown to see where he played basketball and ate a lot of Pizza Hut. One brand new detail comes from Keith Husky, one of Calaway’s basketball teammates, letting us know that The Undertaker was a big fan of Huey Lewis & The News — go ahead and imagine “Stuck With You” playing during one of his entrances.

On the court, though, Calaway is described as a big bruiser who keeps getting bigger as he worked out. In the gym, he follows someone’s else idea to get trained as a wrestler at Buzz Sawyer’s school. It was old school training, with Sawyer trying to break all the trainees, but Mark sees it through and it got the ball rolling.

He heads to the Sportatorium in Dallas, encountering Fritz Von Erich and getting a booking under the handling of Percy Pringle. He meets South African wrestler Steve Simpson, who takes Calaway back to his home country for some matches, before heading to Memphis and starting to gain traction. By this point, he’s learning how to improve in the business.

Next up is WCW, where Calaway takes the place of the injured Sid Vicious and joins Dan Spivey as one-half of The Skyscrapers under Theodore Long. Spivey talks about how WCW was a mess, and that he left the company to go back to Japan, leaving Calaway hanging. While renegotiating his contract, Calaway recalls Ole Anderson’s jab that nobody was ever going to pay to watch him wrestle.

That leads to the last time Calaway would switch companies. Though Bruce Prichard and Vince McMahon didn’t see eye to eye on Calaway’s potential (Prichard saw something, McMahon didn’t), and though Calaway had an emergency stitch meeting after ripping the back of his pants apart trying to get into Paul Heyman’s small car, he ended up making an impression on McMahon and was soon debuting as The Undertaker at Survivor Series in 1990.

Heyman calls The Undertaker’s WWF debut the failure of WCW, because the one thing they didn’t have was imagination. Well, that’s plainly untrue, but Heyman is in full pro-WWE mode.

Percy Pringle arrives at the WWF and reunites with Calaway, now as Paul Bearer. Re-telling a story that he relayed at his Hall of Fame induction, Calaway and his mother Catherine look back on when Sid was jawing at her in the crowd during a match and she had to be held back from charging the ring.

Next up, Glenn Jacobs joins the party as Kane. It’s a pretty quick ride through their history as adversaries and partners, before another quick ride through Undertaker’s different characters interpretations and how the fans loved each of them in turn. A lot of attention is paid to Undertaker and Mankind ‘s Hell in a Cell match, with the well-told story told once more.

Returning to his personal life, Calaway admits that he had the answer to everything in the wrestling world, but regrets how much he missed of the youth of his eldest children (from previous marriages first to Jodi Lynn, then Sara Frank), and is thankful for another chance at parenting with his children with his current wife Michelle.

The final segment features on how Mark and Michelle started dating (they each talk about how the other chased them down), and then started their family as the bell finally tolled on his career.

So, the first episode of Biography‘s season is run-of-the-mill WWE programming. It looks great with lots of nice clips, and it was pleasant to hear Jim Ross’ voice on some of those clips instead of having his part muted while we works for a rival company.

All in all, though, no Undertaker fan is going to learn anything new (except maybe the Huey Lewis thing) but it’s a fine, easy trip down memory lane.