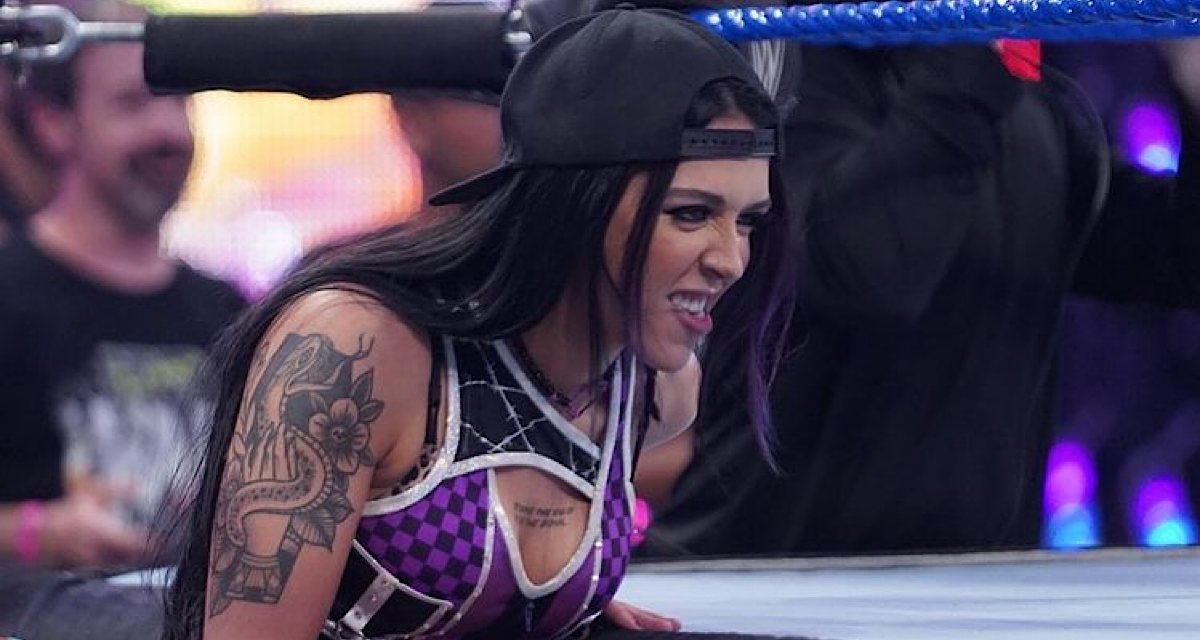 The infamous NXT parking lot struck again as Roxanne Perez was found laid out on the concrete to open tonight’s episode. Correspondent McKenzie Mitchell and commentators Vic Joseph and Wade Barrett presented their questions and thoughts throughout the show, but unlike the mystery of who actually pied Kevin Owens at that Fourth of July party in 2016, this whodunnit was eventually solved.

The most underrated commentator in the game right now, Wade Barrett, poses and smolders in the middle of Vinci’s entrance snapshot. Speaking of smoldering, the two shiny-headed, jacked-up competitors are even in the opening goings until the Italian gains control preceding picture-in-picture. Crews recuperates with an amazing mid-air dropkick to initiate his comeback, but a clothesline knocks him silly. Vinci uses his often-overlooked power to catch Crews into a suplex, and the two trade maneuvers to “this is awesome” chants. Ringside, Vinci slaps a phone away from a fan’s hands as Xyon Quinn attacks Crews, letting the former capitalize with a powerbomb for three. Crews had momentum in his surprise return, but the weeks proceeding have been more uninteresting than Quinn himself.

Earlier today, Tiffany Stratton was getting her nails done while complaining about Wendy Choo.

A dejected Cameron Grimes enters the ring after losing at Great American Bash last week. He speaks genuinely with quick wit until JD McDonagh appears “to kick a guy while he’s down real quick.” With his abnormally large head, McDonagh delivers a headbutt but ultimately retreats from a fired-up Grimes.

Diamond Mine rewatches the tape from last week’s match, but Roderick Strong berates partner Damon Kemp. “I wanna see how you feel after I embarrass you next week one-on-one,” threatens the faction leader.

Grayson Waller is interviewed backstage, aggravated about losing to Carmelo Hayes with the interference of Wes Lee. Meanwhile, Roxanne Perez is examined in the trainer’s room.

“She has been snapping at women in the locker room left, right, and center,” says commentary about Carter – which evidently spawned this matchup. It doesn’t take long for Diamond Mine’s Ivy Nile to oppose Katana Chance on the adjacent side, and Paxley gains the victory with a roll-up.

Joe Gacy interrupts Vic Joseph and Wade Barrett, announcing he and the Dyad as the Schism. “Next week, a cleansing, a purification will take place,” reveals Gacy as the Dyad will finally unmask next week.

Sanga is rewatching his Great American Bash cannonball that caused Duke Hudson to get water in his ear. That’s one way to set a match up.

Big meaty men are slapping meat – specifically “six-foot-five inches of prime, Aussie beef” is Hudson according to Wade Barrett. Hudson claws at Sanga’s mustache and rips away at his chest hair, but the latter catches him with a huge chokeslam for three. He’s a unique babyface big man with potential for sure.

Backstage, Mr. Stone and Sofia Cromwell brag about Von Wagner’s baseball and football skills. But Wagner chimes in, “It doesn’t matter if it’s the streets, the island, or in that ring. We’re about to find out how tough of a fighter you really are.” Solo Sikoa responds, “It’s put up or shut up time for you, and it’s go time for me.”

Toxic Attraction is interviewed backstage, accused of taking out Roxanne Perez in the parking lot.

Sikoa gets a slimy cheapshot in, but both competitors legitimately look pretty badass. Wagner, especially, with Mr. Stone and Sofia Cromwell has found a presentation that really works. He’s in control proceeding commercial break, but with crowd support, Sikoa begins fighting back. He delivers a corner hip attack and brawls ringside until the referee counts to ten, and a pull-apart commences. These are two promising NXT projects, so more from them will be great.

Lash Legend dribbles a basketball and talks trash to opponent Indi Hartwell. The basketball rolls away to a red baseball bat, of course foreshadowing the appearance of Alba Fyre.

Chase University’s Andre Chase, Bodhi Hayward, and Thea Hail went on a field trip to London, England. What follows is a fun montage, much like all Chase University segments are turning out to be.

After a few minutes of methodical offense from Legend, the aforementioned Alba Fyre creates a distraction atop the ringside podium. Hartwell goes to hit her springboard finisher but legitimately slips, but an awkward roll-up goes in her favor anyways. This was definitely one of the matches of all time, and it is absolutely must watch!

The women’s roster is arguing backstage about the attacker of Roxanne Perez until Solo Sikoa and Von Wagner barge in brawling. Next, McKenzie Mitchell questions Elektra Lopez because of Legado del Fantasma’s parking lot abduction history.

Outside, it takes Sofia Cromwell to stop Wagner’s brawling. But meanwhile, Sikoa biels Mr. Stone into a dumpster. Man can’t catch a break.

The “scan here” image leads to a Wordle game with six words filled out: “Quinn, Becky, Crews, Trick, Brock, Toxic.” The “O” in toxic is yellow, and the “C” is green. This is actually awesome and very well played – well not literally, the Wordle game obviously wasn’t won.

Joaquin Wilde and Cruz Del Toro are ringside, and supposedly, tonight’s match will reveal their worth to the Family. Otherwise, they’ll either be hospitalized like Santos Escobar or straight-up murked like Troy “Two Dimes” Donovan. “Tony D” doesn’t play around. After some time, Blade makes a comeback, but D’Angelo shuts him down with his finishing neck breaker. He instructs Wilde and Del Toro to continue the beatdown, and the duo reluctantly obliges.

A vignette talks about comic books and superheroes, and Axiom (presumably A-Kid) reveals himself as a masked man.

Rose takes the microphone to trash talk Roxanne Perez as opposing “shut the hell up” and “let her talk” chants are spewed. Perez’ partner Cora Jade attempts to take her place to suspecting jeers, but the rightful challenger arrives bandaged up. Perez gets little-to-no offense as her injured midsection is targeted throughout the entire opening half, but she makes the miraculous comeback following picture-in-picture. She connects with a suicide dive and takes out Toxic Attraction, taking out Rose ringside with Pop Rox. Jacy Jayne distracts the referee as Jade hits her tag partner and best friend with their NXT Women’s Tag Team Championship belt, ultimately giving Rose the victory.

“You’re selfish,” Jade tells Perez before she attempts to attack her with a skateboard. Except the skateboard is gimmicked and breaks in half before it even makes contact… oops.

Low bar, but this was the best standard NXT weekly show in a while. The whodunnit mystery that spanned the entire show was an interesting angle with a nice payoff – something that’s sporadic for this brand. And while skateboard botches and Lash Legend were here too, tonight’s show featured some effective segments.