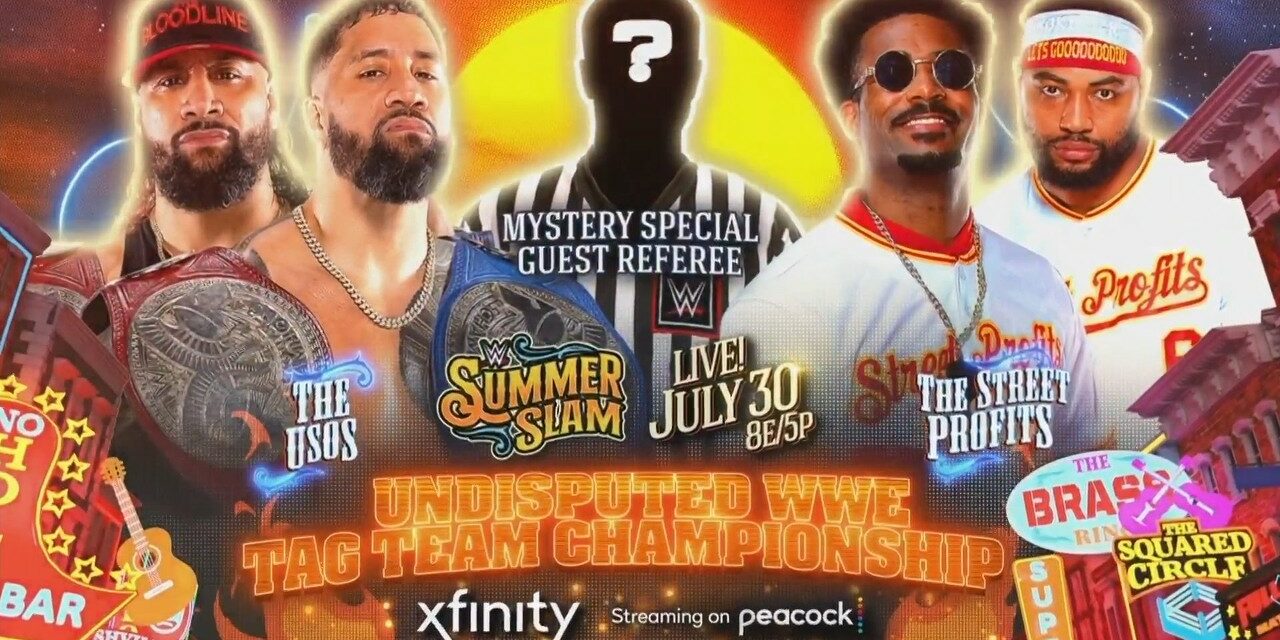 We are 15 days away from SummerSlam! Yay! I’m excited for this.

Micheal Cole is in the ring at the start of the evening as he re-introduces Pat McAfee. He will face his attacker, Happy Corbin, at SummerSlam.

McAfee says he’s ecstatic to be in Orlando tonight.

Well… anyway, Pat tells us how he knew Corbin long before they entered SmackDown. He knew Happy when he had hair, they played football, one bad tattoo and a deflated body. McAfee rants how much he despises Corbin by saying he’s allergic to pretty much being a decent person.

Corbin appears on the TitanTron. He has to stay away from McAfee due to some illness, blotches on his body. McAfee moved the night along by welcoming Liv Morgan, our women’s Money in the Bank winner and new SmackDown Champion to the ring.

Nattie is so sure she was the reason Liv won against Ronda for the championship belt a couple of weeks ago, so yeah, she’s pissed.

As the battle starts, Nattie takes the fight straight to Liv by pounding her in a corner. Morgan resists and fights back with a drop kick to Natalya’s chest.

Natalya places Liv onto the rope then throws Morgan on her ass, hard, in the centre of the ring. Nattie holds the momentum as she walks all over Liv’s back but Morgan retaliates by moving out of the way just in time as Natalya misses a drop kick and lands on her back.

On the apron, Natalya takes hold of Liv’s ankles, swings herself backwards and flings the champ into the ring post leaving Morgan a heap on the floor.

Nattie has been dominating this match.

Liv pulls out ‘Oblivion’ though to win the match.

Theory has an interview backstage or should I call it gloating. That is until Paul Heyman shows up out of nowhere to remind Theory that Heyman is the one responsible for his rise.

I’m sure Heyman was trying to manipulate Theory to not cash in on either Brock Lesnar or Roman Reigns. Of course, Theory used whatever brains he has left and said he will do as he damn pleases. One on his own is bad enough but both of these guys together is torture.

As we continue with the evening, Pat initially thought the Viking Raiders arrived but it was actually New Day dressed as the Raiders just like how Natalya impersonated Ronda Rousey a little while ago.

If I’m being honest, I don’t know what the hell is happening with New Day. They came dressed like poor imitations of Vikings, it’s sad, really. Talking about how they wanted to embody Vikings by watching all the Thor movies. Arg, why?

Even after Ivar and Eric show up New Day continues to mock them. They advance the ring and get ambushed by Shanky and Jinder Mahal out of thin air. Huh?

Moving on. Gunther is interviewed by Kayla Braxton about his punishment of Kaiser last week. The man doesn’t like losing and he doesn’t take it lightly. Ludwig is punished some more with chops as Gunther yells in German. Brutal!

Lacey stops and restarts her entrance like last week because she doesn’t like the crowd’s response. The second time trying was nonexistent since the audience didn’t clap, maybe except for Pat.

Lacey apologizes. The fans boo so she tells them to go to hell for not showing respect. Lacey walks out again, upset and angry. Understandably, I’ve noticed. But, Aliyah deserves a chance to release some pent-up frustration. No?

This match is an opening for either men to battle the Undisputed Champion, Roman Reigns, yet neither seems to be concentrating on their match. Because, once again, Sheamus is still attempting to set a trap.

Butch continues to behave like a rabid animal as he steals and rings the bell. Ridge steps into the match but McIntyre gives him Ten Beats of the Bodhrán. Hey, that’s Sheamus’ move!  McIntyre also hits him with White Noise. After that, Drew brings us to Claymore Country for the win.

When is Sheamus going to take his inevitable match seriously? Just a thought…

Moss is ready to annihilate Theory because he has a big head. Why not? I want that. Paul Heyman shows up again trying to convince or bribe Madcap due to Heyman’s fear of Theory’s potential cash in for the SummerSlam match between Reigns and Lesnar.

In the end, Moss refuses.

Madcap performs a few takedowns to Theory like the lumberjack he is… without the flannel. Theory goes back and forth between the ropes then attempts to jump over Moss but he gets snatched mid-air and thrown backwards by Madcap.

Moss has been superior during the beginning of the match, but unfortunately, we shouldn’t overlook Theory. He does manage to surprise us even though we didn’t ask.

As I mentioned about surprises, Theory momentarily gets back up in this battle until Moss shoulder tackles him.

Theory reaches for his Money in the Bank briefcase and smashes Moss in the head. Theory is disqualified.

As Theory walks away while disrespecting The Bloodline, Sami Zayn appears to reveal that there will be consequences. Theory mocks Zayn’s supposed ties to the Bloodline  but they arrive right on cue for their match, to protect Zayn…or maybe both?

Madcap sends Theory into the ring post then back into the timekeeper’s area with his briefcase in hand.

Sami Zayn has taken a seat at the announce table bringing his opinions along with him. I can barely pay attention to the match with his voice in my ears.

Jimmy delivers a hard kick to Dawkins’ face. Later, Jimmy is sent into the barricade.

During the commercial break Jimmy takes back the momentum…temporarily because he gets kicked in the jaw by Dawkins.

Angelo pins Jimmy but his right shoulder is up. The Usos dispute the win.

Adam Pearce arrives to reveal our mystery referee, who will be unbiased and attentive.

The special referee guest for the Usos and The Street Profits’ SummerSlam rematch is Hall of Famer Jeff Jarrett.