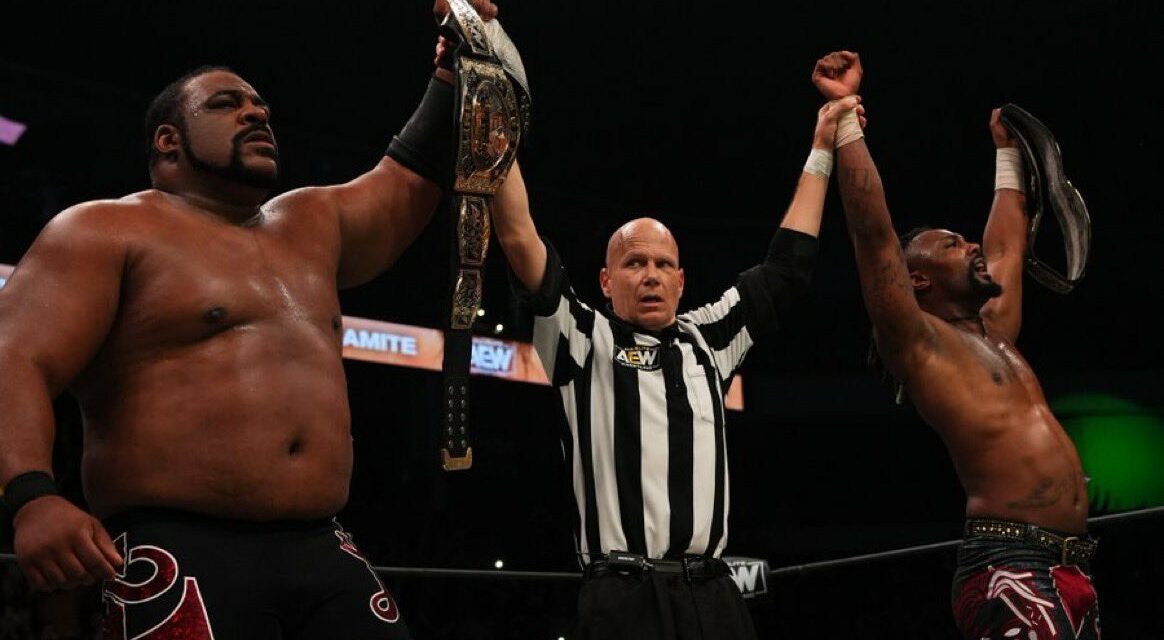 Tonight is the first night of Fyter Fest in AEW, making an ordinary Wednesday night show feel like something special. This isn’t just lip service, either. There are two championship matches on the card. So let’s get right to the action.

Orange wants to start with a knuckle lock, but then puts his hands in his pockets. Wardlow removes Orange’s hands from the pockets and then rips out the pockets. Cassidy responds by placing Wardlow’s hands in his tights. Orange avoids Wardlow’s attacks and hits a hurricanrana, but the champ lands on his feet. The Best Friends come to ringside and Chuck Taylor tries to slip a chainsaw in the ring. He gets caught red handed and the ref ejects them from ring side. Orange plays his games with Wardlow, but is caught on a suicide dive. Wardlow then is able to block getting shoved into the ring post. Wardlow pulls Danhausen out from under the ring; Danhausen decides not to curse him and Wardlow let’s him go. Cassidy takes advantage of the distraction and hits the Orange punch.

Back in the ring, Cassidy looks for another Orange punch, but Wardlow catches him and tosses him out of the ring. Wardlow misses a charge in the corner and Orange smashes him into the turnbuckle. Cassidy gets caught on  flying cross body. Orange with a chop block. Wardlow blocks the Beach Break and looks for a powerbomb. Orange counters with a DDT and follows with second. The champ kicks out at one. Wardlow hits the F-10. Cassidy kicks out. Wardlow sets up a powerbomb. Orange tries to fight his way out. A hurricanrana sends Wardlow to the floor. Cassidy follows with a suicide dive and drive the champ into the ring post. Orange is caught on a DDT, but is able to hit Stundog Millionaire. He connects with the Orange Punch and takes Wardlow down with Beach Break. Wardlow still kicks out at two. Wardlow catches Orange in mid air and drops him with a powerbomb. He covers and gets the pin.

After the match, Wardlow helps Cassidy get up and gives him the fist bump of respect.

Chris Jericho accepts Eddie Kingston’s challenge of a barbed wire death match, but Kingston will be facing the Painmaker.

The two start off by trading holds which then devolves into trading blows in the middle of the ring. Konosuke ducks a lariat, but Mox catches him with a second attempt. He follows with a pile driver; Takeshita kicks out at two. The two fight on the apron. Takeshita with a German suplex on the apron.

After a commercial break, Mox with an overhead suplex and both men are busted open. Takeshita ducks two lariats and hits a flying forearm. Moxley follows Takeshita out of the corner, landing  kick. Konosuke with a brain buster, but only gets a two count. Mox blocks a frog splash but getting his knees up. The champ locks in a cross arm breaker. Takeshita is able to rolls to the ropes and get a break. Takeshita with a hurricanrana and then hits the frog splash. Mox still kicks out. Mox applies a sleeper, but Takeshita counters with a Blue Thunder Bomb. Mox blocks the jumping knee and hits the Paradigm Shift. Takeshita with a rolling elbow strike into a German suplex. Moxley kicks out again. A head butt slows Konosuke down and Mox hits the Death Rider. Mox hammers away at Takeshita and locks in the Bulldog choke. Takeshita taps out.

The House of Black has a warning for Darby Allin.

Christian Cage walks out on stage and is joined by Luchasaurus. Cage finds the Varsity Blondes annoying. He then goes after Brian Pillman Jr., saying Brian Pillman would be appalled by his son. Griff Garrison looks like Jungle Boy and Luchasaurus stomps to the ring.

Luchasaurus hits a German Suplex that sends Griff to the floor. Luchasaurus kicks Garrison into the ring post. He then choke slams him in the middle of the ring. Cage calls for another one. Luchasaurus locks in the Tar Pit and Garrison taps.

Pillman gets between Luchasaurus and Griff after the match, but gets blindsided by Cage. Luchasaurus choke slams Pillman onto a table and then slams Garrison through him and the table.

Tony Schiavone is in the back with the Jericho Appreciation Society and then have some question about the shark cage they will be suspended in above the ring. Daniel Garcia then calls out Wheeler Yuta for the ROH Pure Title.

Tony then gets a word with Hangman Adam Page. He’s disappointed that he didn’t win the Royal Rampage. John Silver and Alex Reynolds then call out the House of Black.

After a commercial break, Hagar misses a short armed clothesline. Claudio launches himself off the ropes and connects with an uppercut. The two trade punches in the middle of the ring. A drop kick sends Jake to the floor. Claudio delivers a running uppercut. A diving cross body isn’t enough to get the three count as Hagar kicks out. Castagnoli takes down Hagar and he goes for a swing. He locks in the Scorpion Death Lock. Hagar is waving the JAS in. Claudio breaks the hold and the distraction allows Hagar to nail a side slam. Castagnoli kicks out. Hagar wants the ankle lock, but Claudio kicks his way out. He hits a suplex and goes for the Death Lock again. He has to take care of the JAS again. He ducks a lariat from Hagar and hits the Ricola Bomb and picks up the win.

When Lexy Nair asks Hook about a possible title shot in his future; he just gives her a smirk.

Tony Schiavone is backstage with Toni Storm and Thunder Rosa, better known as ThunderStorm. Rosa talks about her match in Japan. She was also excited to tag with Toni last week. Britt Baker and Jamie Hayter crash the interview. Baker makes fun of them.

The two lock up to start with neither gaining an advantage. Anna hits a flatliner and looks for the Queen Slayer. Deeb gets to the ropes and hangs up Anna to break the hold. She follows with a neck breaker; Jay kicks out at two.

After a commercial break, Deeb is taken down with a sling blade. Deeb breaks out of the Queen Slayer and twist Anna around. Anna with a back body drop. Deeb locks in a submission. Jay rolls over into a pin. Deeb releases the hold. Serena with a dragon screw off the second rope. Deeb covers, but Anna counters into the Queen Slayer. Deeb breaks the hold with an arm drag. She applies the Serenity Lock and Anna taps out.

Mercedes Martinez runs in to pull Deeb off when she doesn’t release the hold.

Tony Schiavone is backstage with Jade Cargill and her entourage. She says no one is worried about Kris Statlander. Stokely Hathaway wants to address the Baddies situation and tells Statlander that they will be watching her.

Keith Lee and Matt Jackson face off to start. Jackson can’t get the head lock and has to ducking a jumping kick. He bails out, tagging in Matt. Swerve also gets the tag. Swerve cart wheels out of an arm drag. Nick flips to the floor and Swerve follows. The two slip back into the ring and Nick with a deep arm drag. Ricky Starks makes a blind tag. He walks the ropes with Matt as Nick does the same with swerve. They end up getting crotched. Nick hits three northern lights suplexes on Starks. Lee tags in. He sets up Nick for a suplex and Hobbs joins in him to double team him. Lee with a suplex to Starks and Nick. Swerve traps Matt in the corner, allowing Lee to deliver the bear slap. A drop kick knocks Lee out of the ring to the floor. Starks tags himself in, saving Swerve from a superkick. Hobbs whips Swerve into a drop kick from Starks.

After a commercial break, The Bucks get taken out but Strickland. Lee tosses Starks into the champs, clearing the ring. Hobbs and Starks yanks Lee out of the ring. Lee catches Matt in mid air and slams him into Nick. Hobbs and Lee trade shoulder blocks. Hobbs takes Lee down with a cross body, but he pays for it. Lee heads up top with Hobbs in his grip. Head butts send Lee to the mat. Hobbs with a frog splash, but Lee kicks out at two. Nick tries to fight off Hobbs and Starks. Hobbs picks him up on his shoulders as Stark take him for a rope walk. Starks hits a cutter and nearly gets the pin. Nick and Matt hit Swerve and Lee with superkicks. The superkick party drops Lee to a knee. It takes the Bucks and Starks to drop Lee with a superkick. The Bucks then take out Starks with the superkick party. The Bucks grab their belts, but Ricky stops Matt in his tracks with a superkick. Swerve picks up the belt and allows Lee to get to his feet. Swerve drops the belt and gets low blowed by Matt, who then clocks Lee with the belt. Swerve kicks out of the pin. The hit the BTE Trigger on Swerve, but Starks breaks up the pin. Lee catches Nick spring boarding off the ropes and dumps him from the ring. Swerve with the stomp on Matt from off of Lee. The pin is interrupted. Hobbs starts slamming everyone onto each other. Ricky spears Swerve and that pin is broken up. Lee catches a kick from Matt and rips off his shoe. He then suplexes Hobbs over the top rope. Starks punches Lee in the back of the head. Lee with a head butt to Starks, while Swerve takes out everyone else on the floor with a moonsault. Starks runs into tackle from Lee, who then launches himself over the top rope to take out the Bucks and Hobbs. In the ring, Strickland delivers the Swerve Stomp to Starks. He covers and gets the win.

That’s the show see you in seven when Fyter Fest continues.

Fyter Fest night one delivered. AEW always puts on god matches, but they seem to step it up for these special episodes of Dynamite. There were three great matches tonight with Jon Moxley taking on Konosuke Takeshita, Claudio Castagnoli facing Jake Hagar, and the triple threat tag team championship match. The main event is must see.