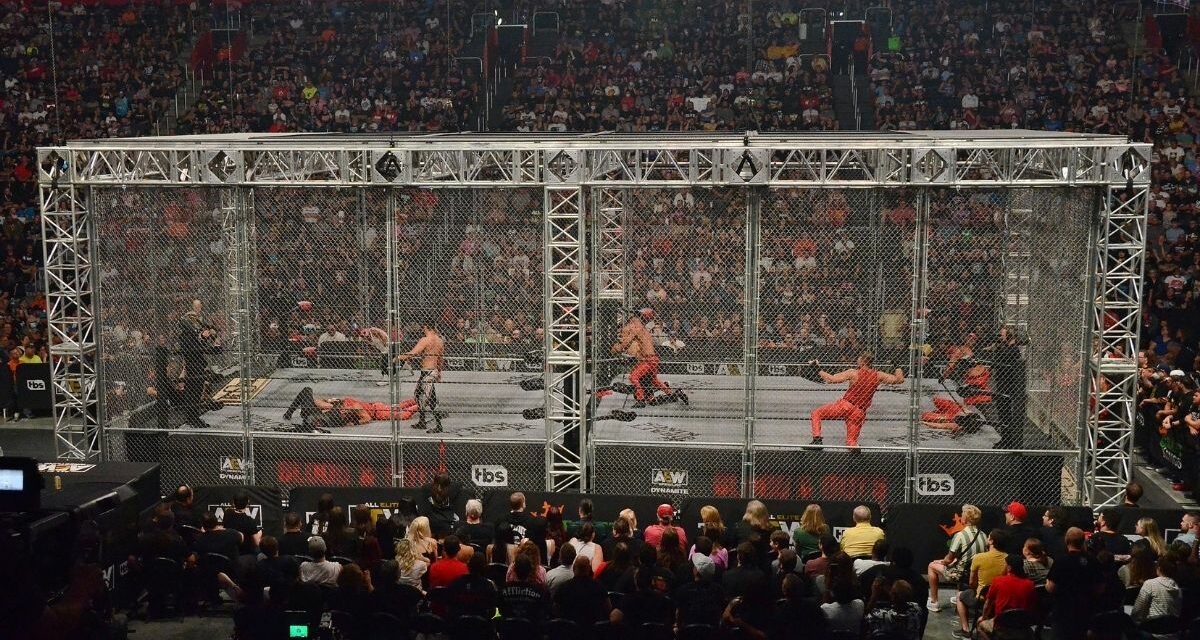 The first time I took my son, Jack, to watch professional wrestling was on December 15, 2014, for Monday Night Raw at the Joe Louis Arena in Detroit, Michigan. He was ten years old, the perfect age for the spectacle of a live professional wrestling event. It was a solid episode of Raw, even if there was nothing particularly notable about the card, other than an unannounced appearance by Brock Lesnar and a steel cage match between John Cena and Seth Rollins. Jack was a fan of Dean Ambrose (who we nicknamed “Jeans” Ambrose) but he picked out a Dolph Ziggler T-shirt from the merchandise stand, since he already had an Ambrose shirt at home, but the best souvenir we received that night was the red “Never Give Up” towel Cena threw into the crowd on his way to the cage, which I snatched from the air and gave to Jack. 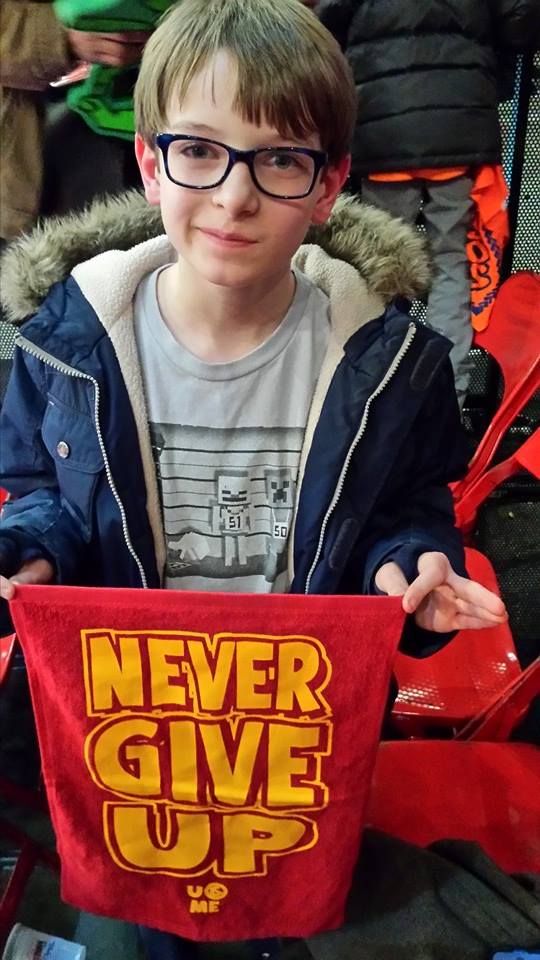 By the time Jack came with me to Evolve 115, when he was 14 years old, he had more or less tired of professional wrestling, so from then on I started to go to wrestling by myself, but I never stopped asking if he wanted to go, in the hopes he’d have a change of heart. He’d always politely decline or offer to go with if I really wanted him to, but I never wanted to pressure him to go to something he didn’t enjoy.

For the past few years, I’ve regularly attended wrestling events by myself, or occasionally with my partner, and I’d come to accept that my son may never willingly choose to watch live wrestling with me ever again. He hasn’t needed me to attend a concert with him since September 2019 (Tyler, the Creator at the Masonic Temple in Detroit), so what could cause him to change his mind about professional wrestling, now that he’s 17 years old and with a driver’s license and his own method of transportation?

On Sunday, June 26, I was watching AEW’s Forbidden Door from our living room couch when Jack walked by, on his way from the kitchen, during the main event between Jon Moxley and Hiroshi Tanahashi.

“That’s a lot of blood!” he said, and then, with surprise, “Is that Jeans (Dean) Ambrose?”

I’ll admit, as much as I’ve watched and discussed AEW in my house, I was a little disappointed he didn’t immediately remember the bleeding man’s name was now Moxley, and not Ambrose, but he quickly corrected himself, and when the post-match melee ensued, he seemed genuinely engaged as he recognized a number of the men sprinting to the ring.

Moxley, Chris Jericho, Jake Hager (who he knew as Swagger), the Young Bucks (remembered from his nights at ROH), and finally Claudio Castagnoli, who he always enjoyed as Cesaro.

An opportunity presented itself, and I eagerly told him that I had two tickets to AEW’s debut event in Detroit on Wednesday, and asked if he wanted to go, and with little to no convincing required he said yes. So, it was official, not only would I be attending AEW’s first-ever event in Michigan, and not only would that event be a special Blood and Guts episode of Dynamite, but I would be going with my son, who hadn’t attended a live wrestling event since Evolve 115, three and a half years ago.

In the days leading up to the show, I half-expected Jack to change his mind about going with me, and I wouldn’t have blamed him. Like I said, he’s 17 years old, has a job and a significant other and an active social life. Why would he want to hang out with his dad for the night? But he’s always been good like that. As far as I can tell, he’s never been embarrassed to be seen with his mom or I, and even seems to enjoy spending time with us. I was looking forward to spending the evening with him, and come the day of the show, he was still willing to go.

This would be Jack’s first time at Little Caesar’s Arena, Detroit’s newest and flashiest venue. I had been to several concerts there since it opened in September 2017, but this would be only my second wrestling event at LCA. Last summer, in August 2021, I attended a WWE “Supershow” in the midst of the Summer of Cena. That was my first live wrestling event since COVID-19 canceled everyone’s plans, and I admittedly became emotional at one point, watching live wrestling after thinking it might never be possible again, and I swear I teared up when, in the main event of the evening, Dominik Mysterio made the hot tag to his partner, John Cena, and the crowd went wild.

Our seats for AEW were good, though not exactly close. We had a full, unobstructed view of the double-ring in the center of the arena floor, with the massive steel cage looming above. I swear, my favorite part of attending any live wrestling event is that first time I walk in and see the ring. No matter how many times I’ve gone, whether it’s an arena like the Joe Louis or a VFW hall, that first sight of the wrestling ring always warms my heart.

The show began at 7 p.m. for AEW Dark. The crowd was consistently hot for AEW’s YouTube undercard program, presumably a result of the excitement of it being AEW’s first time in Detroit. Jack watched the Dark matches, but predictably was more interested in his phone for this part of the show, while I was hyped to finally see the Best Friends (Chuck Taylor and Trent Beretta). AEW kept the action moving, and there was little downtime between matches, and before I knew it, Dark was over, and the ring crew prepared for AEW Dynamite.

Before the Blood and Guts main event, there were multiple components of Dynamite that kept Jack entertained. First, he really enjoyed Tony Khan. Throughout the show, Khan came out to pump up the crowd, and he appeared to feed off the energy of the thousands of rabid Detroit fans. Khan could easily be mistaken for someone my son would hang out or go to school with, and Jack got a kick out of Khan’s hyper, “f-bomb” peppered pep talks. On our way into the LCA, Jack commented that he felt like he was one of the only kids at the show, and I think he quickly realized why. Clearly, this was not a PG event, and I wondered how the few parents of young children I did see felt about the liberal use of profanity, on and off screen, although the dad we were seated next to didn’t seem to mind that he and his kids were all chanting “Shut the f*ck up!” and “F*ck you, Sammy!” at various points in the night. Also, there was lots of pyro and fire and colorful lights and videos. The stagecraft was impeccable, and I saw Jack frequently taking pictures and videos throughout the night, which he wouldn’t have done if it weren’t something worth remembering.

Not unlike the Dark matches, the few Dynamite segments before Blood and Guts kept Jack’s attention, but he reacted more to the promos than the in-ring action. He laughed at the insults of Dan Lambert, “Platinum” Max Caster, Christian Cage, and Stokely Hathaway, but Blood and Guts was the match he was looking forward to. It’s what pulled him into the arena, and it delivered in spades. 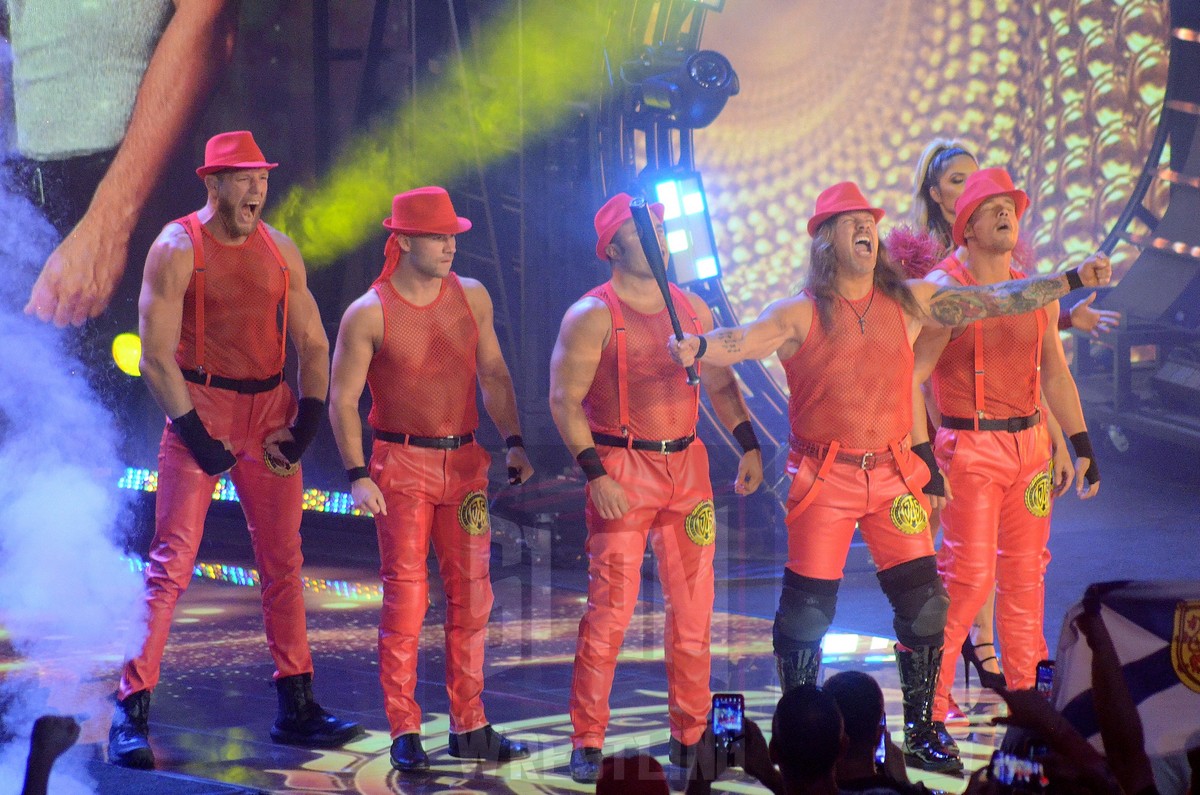 The Jericho Appreciation Society before the Blood and Guts match at AEW Dynamite at the Little Caesars Arena in Detroit on June 29, 2022. Photo by Brad McFarlin

Jack only knew four of the 12 men involved in the main event — Jericho and Hager from the Jericho Appreciation Society and Moxley and Claudio from Blackpool Combat Club, but he still had his phone out to take pictures, record video, and send messages to friends, for nearly the entire match. He laughed and cheered for the wild and violent spots, like the broken glass and thumbtack bumps, and “ooed” with the Detroit crowd when blood began to flow. His favorite moment of the night was when Eddie Kingston sent Sammy Guevara sailing off the top of the cage, which looked even more perilous considering we couldn’t see the crash pad below from the angle we were watching, but a close second favorite was when Claudio gave Jericho the big swing, a move my son fondly remembered from his childhood days of WWE-fandom. Great technical wrestling this was not, but it was compelling storytelling with lots of moving parts, the type of wrestling match to make a teenager come back for more. 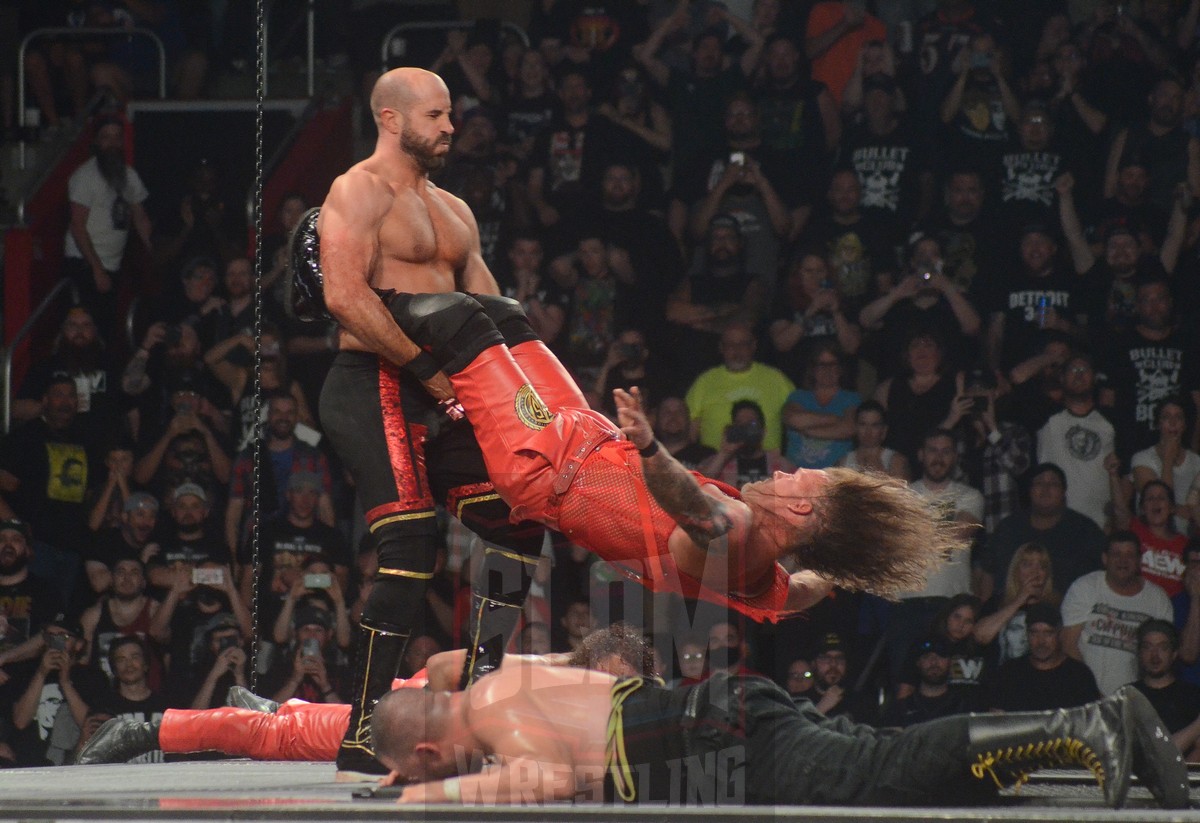 Claudio Castagnoli swings Chris Jericho atop the cage during the Blood and Guts match at AEW Dynamite at the Little Caesars Arena in Detroit on June 29, 2022. Photo by Brad McFarlin

After Blood and Guts concluded, and the blood-soaked yet victorious Blackpool Combat Club celebrated atop the cage and made their lengthy exit, there was a fair amount of cleanup that needed to take place before Rampage could begin, which resulted in the longest break of the night, enough time for visits to the restroom and concessions with time to spare, and I feel the show lost some momentum as a result. By this point, Jack and I were both pretty tired, but we were still excited for Rampage, and especially the inaugural Royal Rampage match, which Khan explained was a match he made up the other night. The Royal Rampage match was very enjoyable, like a sped up Royal Rumble match involving two rings, and once again Jack enjoyed the surprise of seeing wrestlers he watched as a child, like Dustin Rhodes and Matt Hardy. 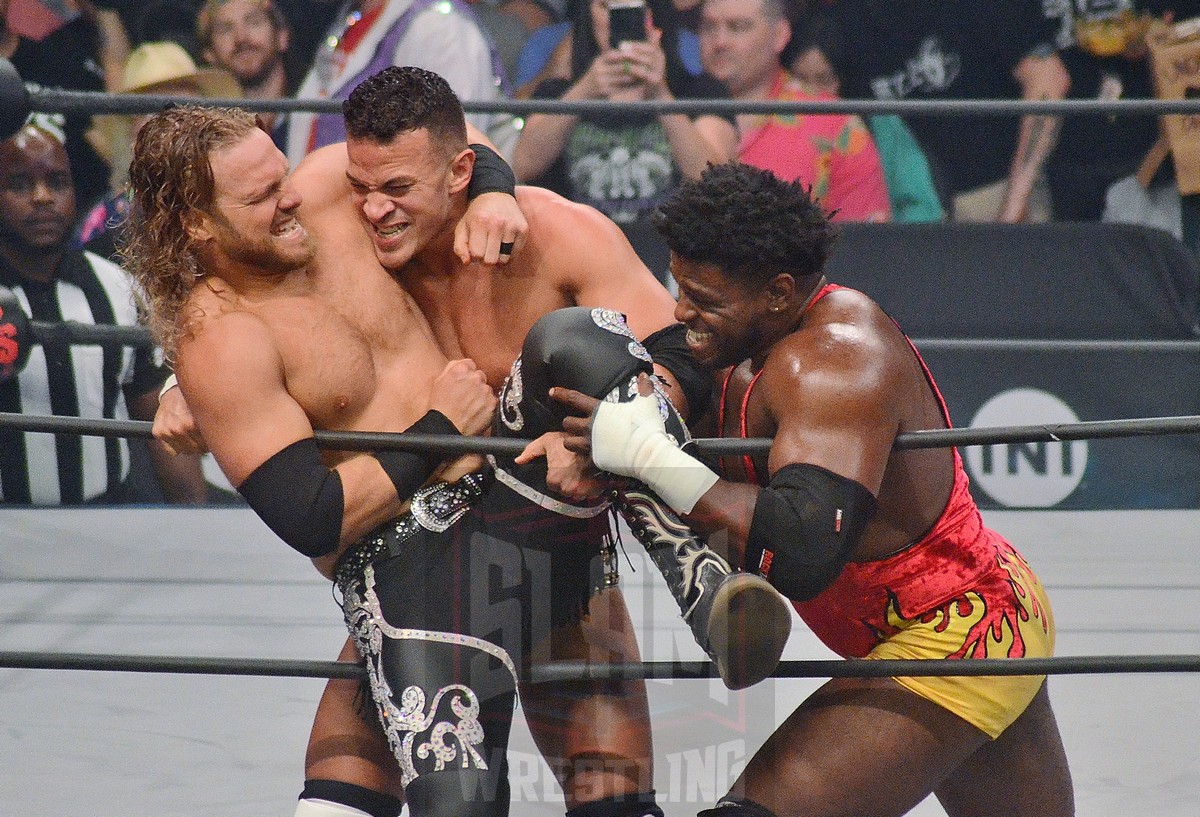 Adam Page, Ricky Starks and Powerhouse Hobbs battle during the Royal Rampage bout at AEW Rampage at the Little Caesars Arena in Detroit on June 29, 2022. Photo by Brad McFarlin

When Adam Page was announced as “Hangman” Adam Page, Jack turned to me and quizzically asked, “Didn’t we see him hang a guy once?” which he remembered from attending Ring of Honor War of the Worlds in May 2016, and I had the pleasure of explaining we were actually there to witness the origin of Page’s nickname, but he’s now one of the more beloved personalities in professional wrestling. 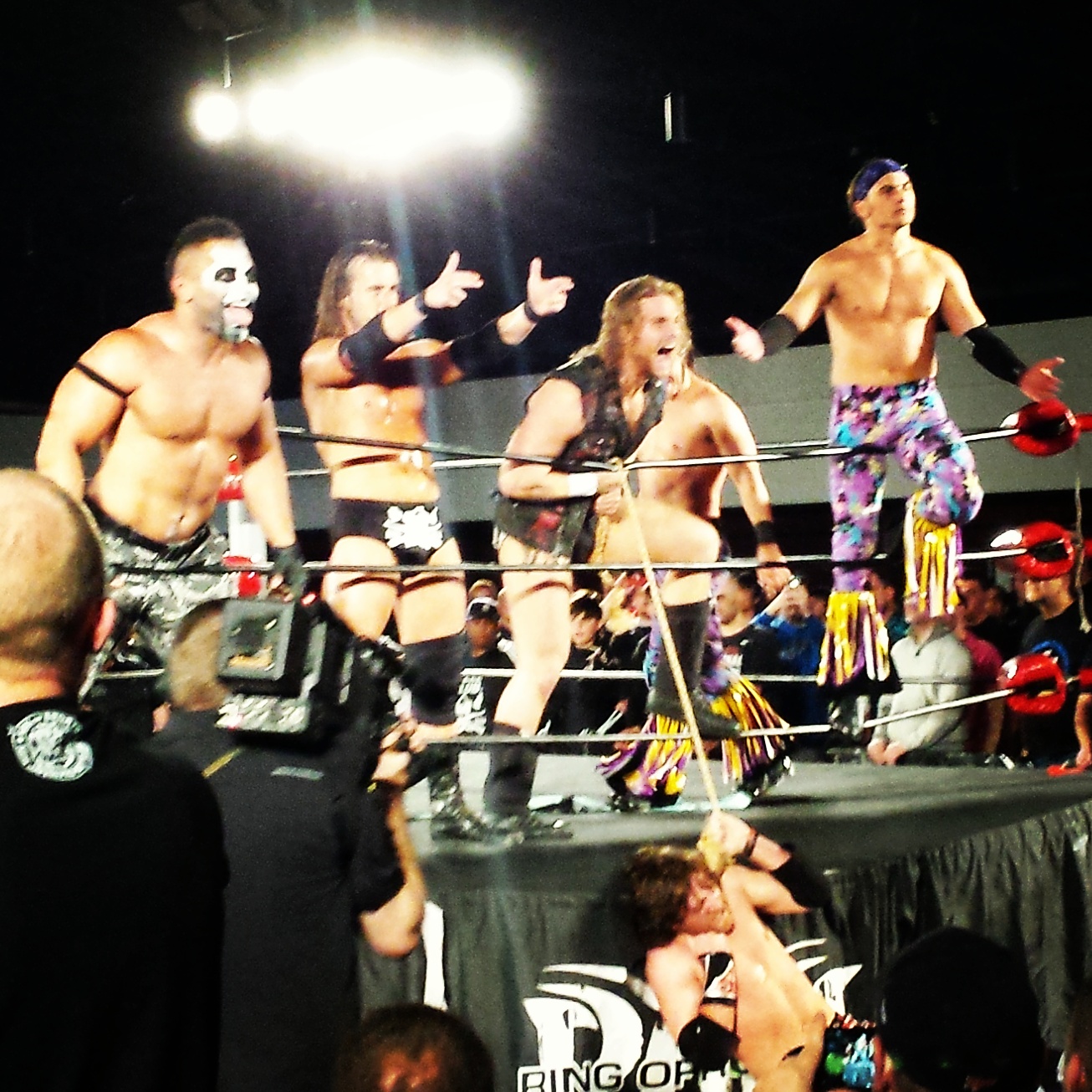 A proud moment when your son remembers a hanging. Photo by Josh Olsen

It was approaching midnight before AEW’s first live event in Michigan was over, and Jack and I were spent. Five hours of action is tiring, no matter how great a show is, and this was a great show, both because of the action in the ring and the company I was with. It had been nearly four years since I watched live wrestling with my son, and he clearly had enjoyed himself, so I hoped this wouldn’t be the last time. I asked if he’d like to come again, next time AEW comes to Detroit, and he said maybe, if they do another match like Blood and Guts, so I’m thinking it’s my parental duty to introduce him to Game Changer Wrestling.