AEW Rampage: A Royal Rampage and a main event between Nyla Rose and Toni Storm 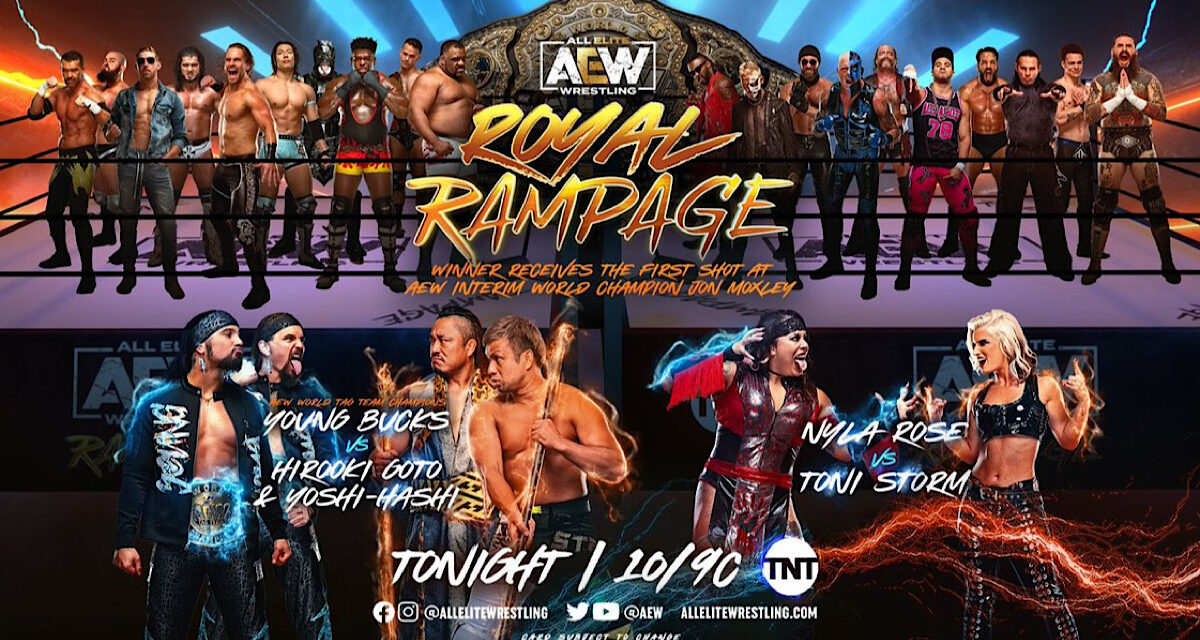 It’s Friday Night and you know what that means?  No, not to find more children in Rocky Johnson’s family tree.  It’s time for AEW Rampage, and not only for we have a Royal Rampage, but Toni Storm will face off against the Native Beast, Nyla Rose, in singles action tonight to settle the score.

From the Little Caesars Arena in Detroit, MI, “Good old JR” Jim Ross, Tony Schiavone, and Excalibur have the call, and we best head straight to the ring for the First Match of the night, and it’s a doozy since this is a… 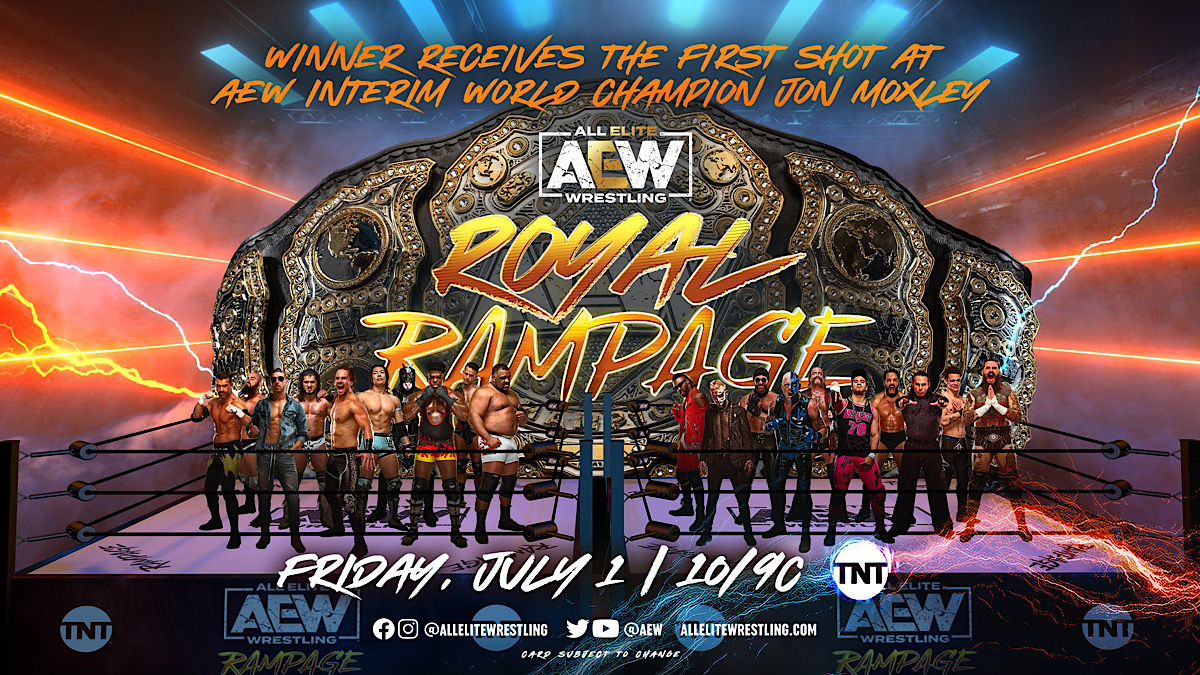 There’s two rings set up, and each entrant is assigned to one ring (designated red and blue).   Each entrant with enter the opposite ring every thirty seconds and they will have simultaneous battle royals by sending a man over the top rope. Whoever is left from each ring with face off to be the last man standing.  Oh yeah,  This is not gonna be fun recapping this, but there are worse things to cover (*cough*WWE*cough).

Must be something in the air, or the stench of Logan Paul.  Either way, I’ll cover who’s in the ring, any big moves, and who gets eliminated to keep it simple.

As the show opens, “Hangman” Adam Page enters the red ring against Powerhouse Hobbs and Darby Allin is in the blue ring versus Tony Nese.  As the timer winds down, Ricky Starks enters the red ring and he and Hobbs team up on Page.  Allin sends out Nese over the top rope, and then does a running tope suicida for good measure.  The Butcher comes out to the blue ring, and he rams Allin on the guardrails before sending him back in the ring.

John Silver is out next, and “Johnny Hungee” evens the odds in the red, but there’s a tense standoff between he and Page.  They both tease sending the other out, but nah…they’re just playing.  Max Caster comes out rapping to the blue ring (with Anthony Bowens saying, “Scissor me, Daddy Ass!”  Again, still won’t get used to it), and Rush heads out for the red ring.  The Blade is out in the blue ring, and he and Butcher team up to work over Allin.

Penta Oscuro is out and heads to the red ring, and Rush comes out to meet him and he gets sling bladed on the ramp.

.@PENTAELZEROM didn't even wait to get to into the ring #AEWRampage pic.twitter.com/muYP79QSuq

Penta goes for a top rope missile kick, but Rush cuts off.  Silver is eliminated as Starks spears him out.  Now Swerve Strickland enters the blue ring and a nails leaping flatliner to Butcher, and cleans house in the blue ring.  Caster is sent over the top rope and eliminated.  Next up is Keith Lee.  As he enters the red ring, he and Swerve acknowledge each other, but Hobbs and Starks blindside Lee.

During Picture in Picture, Matt Hardy enters for the blue ring, and works over his former stables mates The Butcher and The Blade.  Dustin Rhodes comes out for the red ring, but can’t contend with Hobbs’ power.  Penta and Rush are over the top rope and battle it out on the ring apron.  Penta gets behind Rush for a German suplex, but he stops him with a mule kick.  Penta falls backward but drags Rush down for a double elimination.  Frankie Kazarian is in the blue ring and focuses on Allin, but can’t send him over the top rope.  Hardy is sent over by the Butcher and The Blade.   He tries to hang on, but they send their former benefactor crashing to the floor.

Dante Martin gets in the blue ring, and Hobbs and Starks gang up on him right away.  Next is Konosuke Takeshita in the red ring and he is a whirlwind, nailing a blue thunder bomb on Allin.  He follows up with a double suplex to Allin and Swerve in the ring.  Blade clotheslines Kazarian over the top rope to eliminate him.  Brody King enters the red ring, and you got the sense the House of Black member is getting the Diesel push.

Orange Cassidy comes out for the blue ring.  As he made his way, Dante Martin is eliminated.  Takeshita takes it to the King of Sloth Style with a high suplex.  Rhodes gets eliminated, and so does Takeshita in the opposite ring.  Now the eliminations come fast and furious, starting first with Cassidy getting sent out by Swerve.  Next, Hobbs is eliminated, as is Keith Lee and Swerve.

Page is sent over the top rope but hangs on.  Starks rushes at him, but Page pulls down the top rope, as his momentum sends him over.  King clotheslines the Hangman to knock him off the ring apron.

On the opposite side, Allin eliminates in quick fashion Butcher and Blade, and now King and Allin are left.  King makes a beeline and sends Allin forcefully into the red ring.  He gets a cannonball, and sends him up the top rope, but Allin fights out of the high offense King was going for.  Allin  and King are on the ring apron, and King gets him in a sleeper hold.  As Allin fades, King uses his upper body strength and  hangs his limp body over the apron edge before dropping him down to become the last man standing.

Alex Marvez with Hook on what’s next and he says..something.

Huh.  I did not expect that.  Moreover, he’s bust out a little philosophy on Marvez:

So much for punch out Plato.  Let’s head to the ring for some leftover Forbidden Door fun, it’s…

The Young Bucks (Matt and Nick Jackson) vs. Hirooki Goto and YOSHI-HASHI

So, this is a non title elimination match  for a shot at the AEW Tag title held by…The Young Bucks.  Yeah, I can never figure the sense of that, but I’m just gonna enjoy the ride.

Goto and Hashi have the upper hand early on, but it isn’t long before Nick and Matt send the challengers out of the ring and Nick gets a corkscrew crossbody from the top to both men on the floor.  Hashi is isolated by the Bucks for the majority of the match during Picture in Picture, and it’s looks dire as we go to…

Back to the action in the ring, and Hashi reverses a suplex on Matt, and he gets the hot tag to Goto, who delivers a fighting spirit as he cleans house on the Young Bucks.  But Matt and Nick regain momentum with a tandem Sliced Bread #2/punt kick combo.  But Goto and Hashi have tag team moves, too, and they get a legsweep/blockbuster combo on Nick that gets a two count.  Matt takes Hashi out, and as Goto fights Nick, Matt comes back with superkicks aplenty.  Goto gets the signature Ushikoroshi but can’t convert it to a pin.  Now Goto and Hashi hit Matt with a superkick to the Ushikoroshi, but that still gets another two count.  The Bucks get back on offense, and send Goto to the other ring, and Nick trampolines on the top ropes for a splash on Goto.  He leaps back on the ropes  to  deliver the Meltzer Driver for the win.

Your Winners via Pinfal:  The Young Bucks

The Ring of Honor champion, Jonathan Gresham recaps last week on Tully Blanchard’s challenge for he and Lee Moriarty to face his best.  He’s also upset that as ROH Champion he’s not in the same conversations as Bryan Danielson and Claudio Castagnoli, and he wants to be back in the middle conversations to determine the best wrestler.  Next week, Gresham promises to show why he’s the Best in the World.

Mark Henry is with Toni Storm and Nyla Rose, who’s joined by Marina Shafi, for final words.  Rose goes to the weather map, and the wannabe meteorologist says that the upcoming Storm has a and a high pressure of inflated Bull…but wait, kids are involved and she wants to keep it clean.  Rose emphatically says the women’s division all run through her, and if Shafir is The Problem then arose states she is a g**dam catastrophe.  Storm counters that once she’s done with Rose, she will go after the AEW Women’s title once again.

Henry, I agree, that’s been enough talk…because it’s time for the Main Event…

The bell rings, and Storm is able to hang with Rose, but it’s not long before The Native Beast overpowers her.  Storm sends her to the corner, and Rose charges out of the gate and tackles her down to the mat, followed by a suplex to Storm.

This is what @NylaRoseBeast does to the haters in her mentions too #AEWRampage pic.twitter.com/U0qh6YwerO

She attempts to get back on offense and as Storm hits ropes,  Shafir pulls them down to send her tumbling out to the floor.  She gives a big boot to Storm and during Picture in Picture, Rose slams Storm to the steel steps and follows up with a slam to the floor outside the ring.  Rose gets back in the ring and the ref starts to make the ten count, but Rose distracts so Shafir can inflict more damage and be a bigger Problem for Storm.

Rose comes back out to add to the numbers game, but Storm rams her head in to the ring post, and follow up by ramming her to the guardrails.  Storm sends her back in the ring, but Rose still too powerful and manages to get Storm in a modified STF, and wrenches back using her nose.  Storm fights through the pain and reaches the bottom ropes to break the submission.  Rose goes for a cannonball, but Storm dodges and she returns the receipt with a hip attack.  She sends Rose out of the ring and Storm gets a double DDT to her and Shafir on the outside.

Make that a double for Toni please #AEWRampage pic.twitter.com/pQSrNnNA0R

As Storm and Rose slug it out, Storm goes for a suplex but Rose comes back with a roundhouse heel kick for a two count.  Rose drapes Storm on top rope to set up her diving knee.  As she comes down, Storm escapes and gets a German suplex for a two count.  Shafir gets on the ring apron and Storm nails a tornado DDT on Rose and kicks Shafir off the ring. Storm delivers with a pendulum DDT to pin for the one, two, and three.

Your Winner via Pinfall:  Toni Storm

Marina Shafir attacked Storm after the match, and she and Nyla Rose are ready to cause a hurting.   But running from the back, Thunder Rosa made the save and she and Storm send Shafir and Rose packing.  As Rosa and Storm share a moment of respect in the ring, they hold their hands high for the fans as the show closes out.

It’s no Blood and Guts, but it was a good show.  But seriously…a simultaneous double battle royal?!  One word to whoever booked this:  pacing.

Toni Storm and Nyla Rose was a a great main event, and there is nothing The Young Bucks cannot do in tag team action.

I gotta rest up for tomorrow, so see you in seven!