Impact: Josh Alexander goes Against All Odds versus Doering 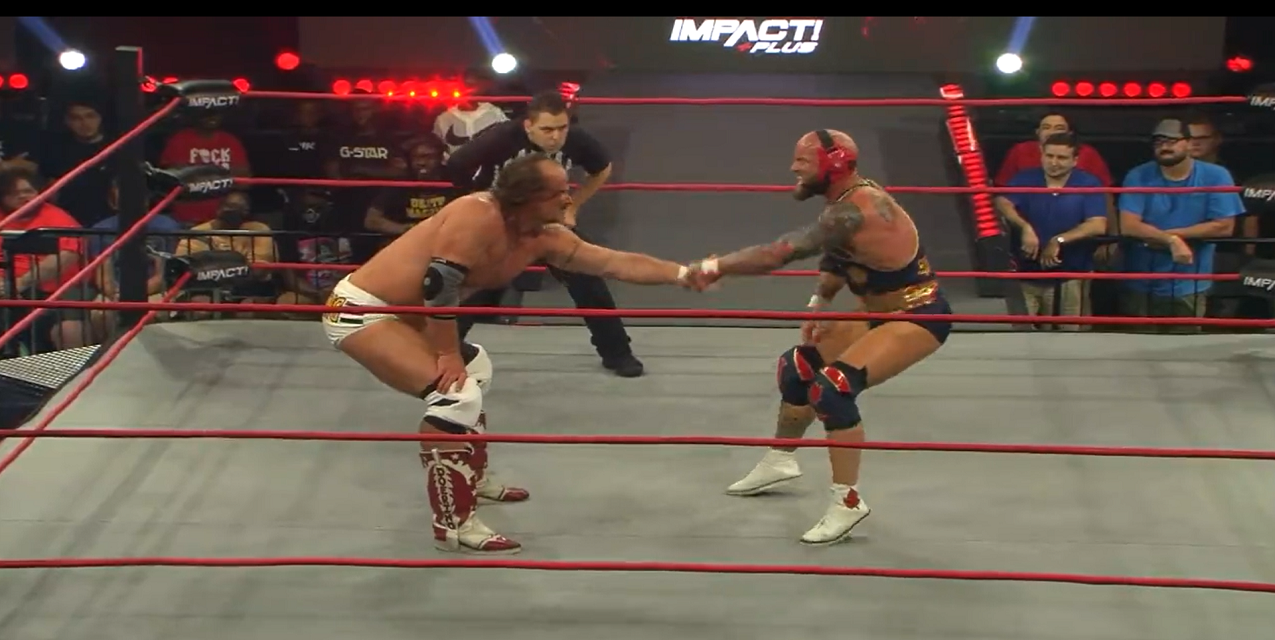 Greeting and salutations, this show had a very quick turn around from Slammiversary but the card looks very strong with your usual championships being defended including the X-Division, Digital Media, Knockouts to name a few. Without further ado lets get to it….

This was quite the mismatch that just worked. The match started with Black Taurus chopping the heck out of Laredo Kid. kid tried to use his speed but Taurus had a counter for all of Kid’s moveset. Kid was able to stun Taurus with a boot to the corner but this was quickly followed up with an uppercut from Taurus.

No matter what Kid tried to bring, Taurus had the answer. Late in the amtch Kid attempted a Spanish Fly but Taurus was able to counter this and slam Kid from the top of the rop. He then did his Powrbull for the win.

Myers tried to attack Swann early in the match with the belt but Swann avoids it and the match turned into a quick brawl. Myers did a tope to Swann on the outside. Myers then grabbed a keyboard and hit Swann with it. Myers then beat up Swann with a mouse.

Later in the match Myers pulls out a Social Media ring light and uses the cord to tie Swann to the ropes to continue an attack. Myers took advantage of Swann at this time. After a bit of time and some more back and forth action, Swann used a Monitor and smashed it to Myers face. Myers hit Swann with a DDT.

The two men then took the match to the outside and brawled up the ramp. Swann was able to get a cutter in and as they fight back intot he ring. Myers hit Swann in the face with a keyboard. Myers with a Roster Cut for the win!

MCMG hit a quick double team to take control after a very 50/50 start between Shelley and Bey. MCMG have a quick in and out offense against the Bullet Club members. Austin hit a superkick on Shelley and then hit a Senton off the top rope. Shelley is being over worked in the middle of the ring and was desperate for a tag to his partner. At one point, Shelley broke free from the Bullet Club attack but there was no one in the corner for Shelley. Shortly thereafter, Shelley is able to make the hot tag to Sabin but Bey pulled Sabin away from the apron and the beating on Shelley continued. Shelley attacked an attack that sent Austin straight into Bey to finally tag Sabin into the match

Sometime later, Shelley hit a double flatliner and Bullet Club came back with a double team attack. Shelley pulled Austin off the top rope and launched Bey off his attack to hit a dropkick. Sabin hit the Cradle Shot but Austin in desperation pushed Sabin into the pin. MCMG hit double kicks to Bey to pick up the win.

Backstage America’s Most Wanted and The Good brothers are interviewed. Luke Gallows was super confident in their abilities and they said that they have a dream team in the ring tonight on their side. Storm said that he and Harris came to TNA together and he is honoured to stand with him.

This match started with all four women brawling in the ring. The heels did heels things throughout the match. Yim hit a double dropkick to tag James in. James charged into both women to take the advantage of the match. Purrazo eventually gained control of the match and stomped on James. Purrazzo applied the bow and arrow to James. Green tagged in and Purrazzo hit Yim off the apron to give the heels another advantage.

Mickie eventually tagged in Yim who took down both Green and Purrazzo. Yim the dodged a step up Enzihguir and dropped Green with a slingshot DDT for a two count. Mickie came in with a flying Lou Thez press and dumped Purrazzo out of the ring. Green dodge an Eat Defeat from Yim but couldnt avoid a Bridging German Suplex for a two count. James was tagged back into the match.

Purrazo sent Yim hard on the outside. Mickie dover over Green and Superkicked her but Green and Purrazzo connect with a SPinebuster/Backstabber double team for the win.

Miguel dodged a Pump Kick and arm dragged Bailey to the outside of the ring. Miguel followed that up with a Suicide Dive. Miguel began working the shoulder of Bailey as he smashed it on the top rope. Bailey hit a Triangle Moonsault. Miguel then hit a dropkcik onto the left knee of Bailey. Miguel continued his attack on Bailey by hitting stomps on Bailey’s left hamstring and followed it up with an elbow. Miguel eventually got a leg lock to continue a focused attack.

Bailey attempted a comeback as he hit a Dragon Screw on Miguel and then trnaisitoned this shortly into an Indian Death Lock. Bailey and Miguel start exchanging kicks to their lower bodies. Miguel eventuall hit a FLying Meteora for a two count. Miguel sweeped Bailey off the middle turnbuckle but Bailey connected with a Flamingo Driver for the win!

Valkyrie and Shaw started the match off. Valkyrie had full control of by taking down Shaw and Rosemary for kicks. Shaw raked the eyes of Valyrie which allowed Dashwood to come into the match. Valkyrie hit a swinging neckbreaker on Shaw to even things up in the ring again. Valkyrie went for a splash in the corner but missed and Dashwood pulled the neck of Valkyrie across the top rope.

Shaw head back into the ring and after a few running uppercuts in the corner, got a two count. Rosemary got into the match and hit Dashwood with an Exploder Suplex. Rosemary then hit an elbow on Dashwood and connected with an upside down submission on the corner. Rosemary then hit a jawbreaker and tagged out but the champs got some double team action in. Rayne pulled the legs of Valyrie to drop her and was looking for Shaw but she wasn’t ready and this gave Rosemary the time to roll up Shae for the quick sneaky win.

After the match Rayne got back into the ring and all three heels attacked the champions. As they are leaving the ring area, Masa Slamovich appeared and gave Dashwood a picture signaling that Dashwood is indeed next.

Mike Bailey was interviewed and said that he strives with competition and will be a fighting champion beginning next Thursday on Impact.

Honor No More vs. American’s Most Wanted, The Good Brothers, & Heath

Anderson and Edwards started off the match and it was incredibly even. The Good brothers double teamed Taven. Heath gave Taven the good ol ten punch in the corner. After some time, Storm was able to get a comeback against HNM. Storm tagged Harris onto the match and they double teamed each member of HNM to some very loud pops from the crowd.

PCO tripped Storm and tossed him onto the floor to a big ovation for himself. PCO teased a dive to the outside to get their opponents but Edwards tagged himself back into the match by hitting the back of PCO. Storm hit a backstabber on King and shortly then hit a HUGE LARIAT on him. He then did a delayed vertical suplex. Bennett came in for the save.

Each member of this match got some moves in. King yelled for PCO to get on the ropes for the PCO-Sault but he actually dove onto everyone on the outside. PCO then short circuited.

In the ring, AMW tried to hit the death sentence on King and were successful. They go for the pin and win the match!

Raven was on commentary and made for an interesting show…..Maclin was also watching this match from afar.

Moose speared Callihan before the match started and then smashed a chair on him on the floor. Callihan used a chair and just up and threw it to Moose but Moose hit Callihan with a pump kick to knock him down. Callihan hit Moose through a table on the outside with a back body drop.

Later on, Moose found a mystery box which was filled with LEGO and dumped it all around. Callihan spilled a  box with broken glass. Callihan hit Moose with two Cactus Drivers onto the LEGO then the glasss. Then someone dressed in all black appeared and gave Callihan a low blow and hit him with a barbed wire bat before leaving the ring. Moose pinned Callihan.

Heath was backstage and was interviewed by Gia Miller, He said that he will be taking out Honor No More one by one.

Steelz attacked Grace before the match started. Grace recovered and ragdolled Steelz inthe ring. Grace with a very hard shoulder block onto Steelz. Evans would eventually get involved and and distracted the champion to give Steelz the chance to take control of the match.

Grace came back and hit more hard shots to Steelz. Grace put Steelz in a torture rack but missed with double knees on the corner after Steelz moved out of the way. Steelz connected with a slingshot bulldog for a close two-count. Grace hit the Muscle Buster but Evans jumped on the apron and distracted the ref to alter the pin. Steelz went to the top rope but Grace hit a jumping palm strike Grace now with a delayed vertical suplex.

Evans tried to get involved again but Grace showed Steelz into Evans and hit a Grace Driver for the win.

It's MAIN EVENT TIME at #AgainstAllOdds!@bigjoedoering goes head to head with @Walking_Weapon for the IMPACT World Championship RIGHT NOW!#IMPACTWRESTLING pic.twitter.com/2TPoLKtiJM

Doering controlled the early part of the match and knocked Alexander out of the ring. Alexander came back in and was ready to take it to Doering. Doring chopped Alexander to the mat and hit an elbow to Alexander after running the ropes.

Later on the match which was Doering mainly getting a lot of offence, Doering went for a Revolution Bomb but Alexander slipped out and put Doering in a standing ankle lock. Doering used his strength to get out of the move and hit Alexander with lariat after lariat. Alexander was now in the corner and Doering was punching his way to victory with Vader like punches and forearms. Alexander timed a perfect duck from an elbow and hit a C4 spike on Doering for the win!

This was a very good show which showcased how diverse the Impact Wrestling roster and booking is. There was no bad match at all and in my most humble opinion, Trey Miguel and Mike Bailey stole the show. Great show!