Blood and Guts violence appreciated at AEW in Detroit 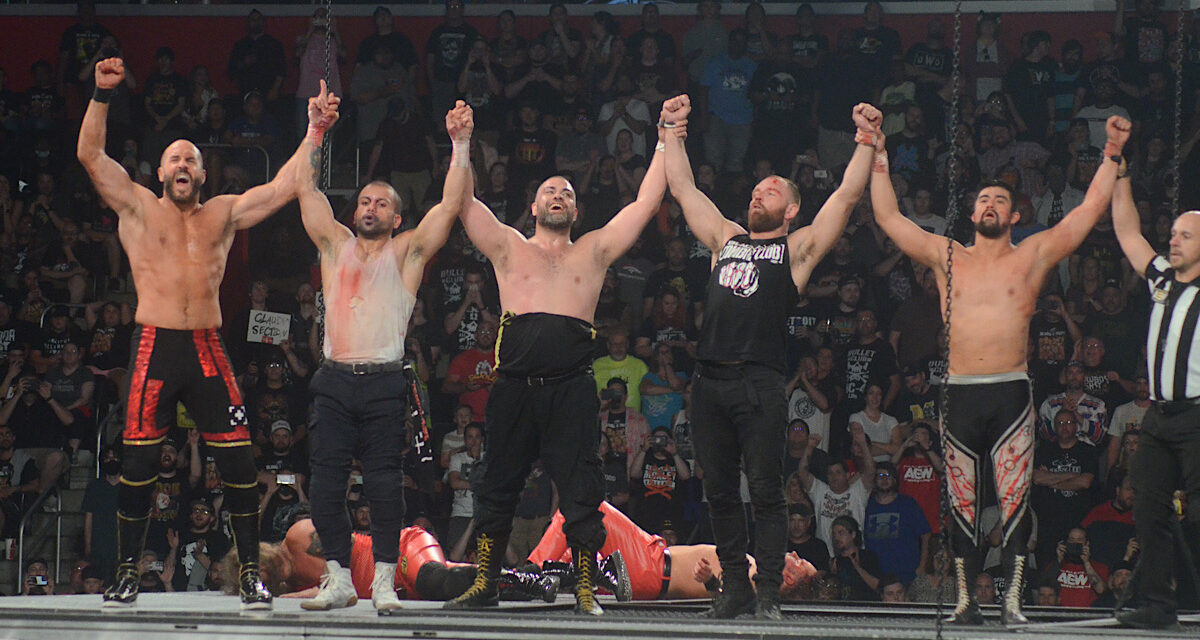 DETROIT – The Midwest has habitually harbored All Elite Wrestling (AEW) shows throughout the promotion’s young three-year tenure – particularly Chicago at an almost upsetting frequency. But following yet another Chicago date, ironically, AEW at last came to Detroit, Michigan with a triple-header Blood and Guts event — a night of wrestling well worth the wait for us Detroiters.

Local WXYZ Detroit news interviewed Eddie Kingston preceding the July 29 show, where he revealed that Detroit was handpicked for Blood and Guts. “They gave us a bunch of dates where we could possibly do it, and I heard Detroit,” said Kingston. “I said Detroit will get it. Detroit will understand the violence, and they’ll appreciate it, and they’ll get it.” 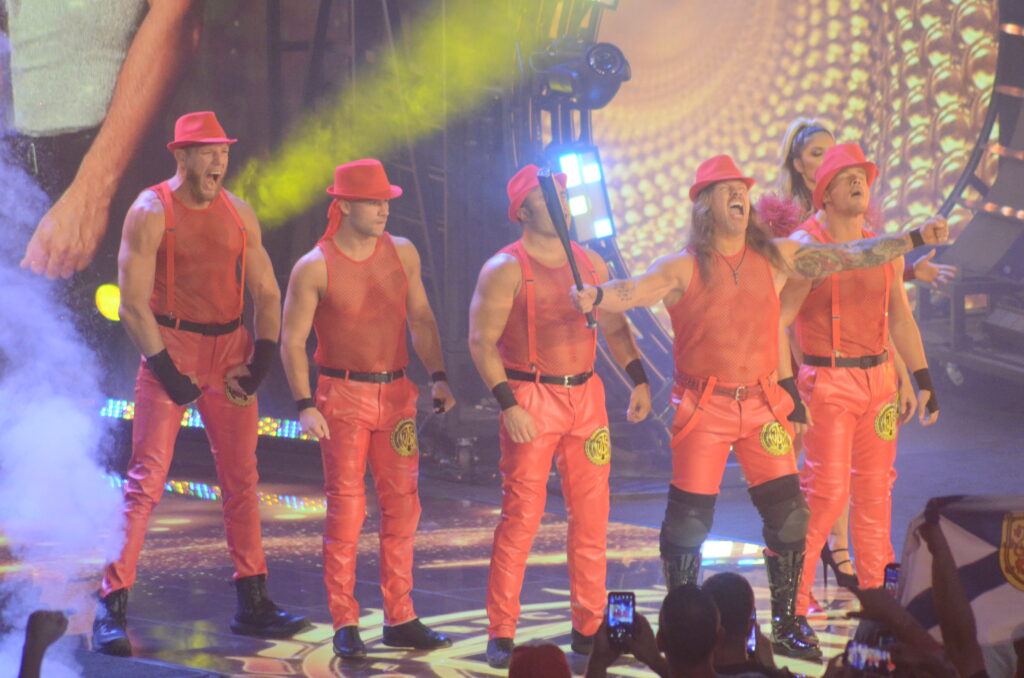 Kingston didn’t cap, because Little Caesars Arena gave AEW perhaps the liveliest and loudest Dynamite yet. Along with the roughly 15,000 in attendance, I blew my lungs out to Chris Jericho’s “Judas” and AEW World Champion Jon Moxley’s “Wild Thing,” so those two interactivities can be checked off the bucket list.

Moxley, Kingston, Satana, Ortiz, Wheeler Yuta, and Claudio Castagnoli took on the Jericho Appreciation Society in a six-on-six double cage match, which was a spectacle to behold. The set-up itself was visually awesome, but the months of buildup and numerous significant moving parts made for an electric atmosphere. The “Mox is God” sign reflected his cult-like reception, Yuta garnered great underdog fanfare, and the newly-signed Castagnoli was treated like a superstar; The Blackpool Combat Club was hot! 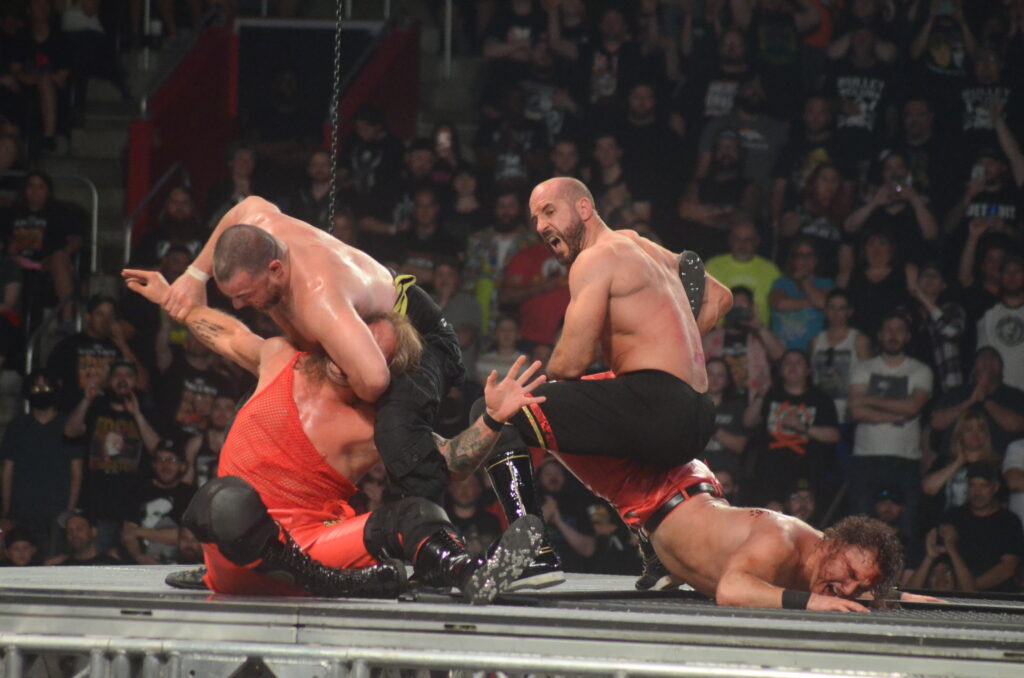 The Blood and Guts match itself spanned about 45 minutes, but I could’ve watched plenty more, because there was never a dull moment. Tables, chairs, kendo sticks, bats, forks, glass shards, and thumbtacks bred Kingston’s aforementioned violence; not to mention Sammy Guevara’s plummet from the cage to the timekeeper’s area, it was an extremely exciting watch. 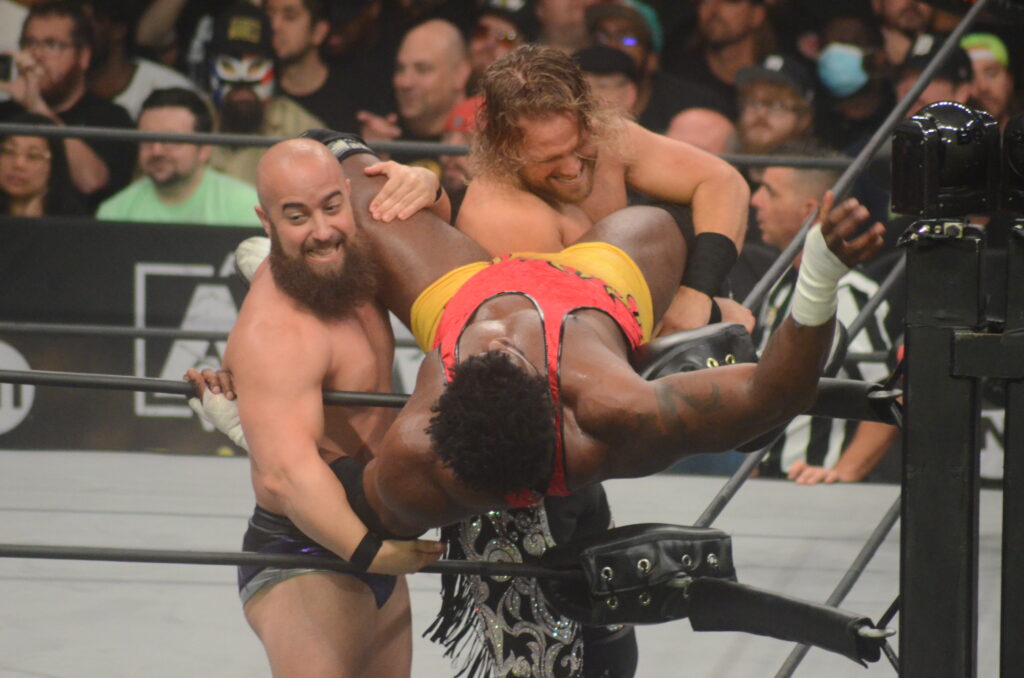 Though impossible to follow Blood and Guts, the triple in triple header – AEW’s taped Friday show, Rampage – was a nice cherry on top. Utilizing the two rings was the inaugural Royal Rampage match, which featured notable names such as “Hangman” Adam Page, Darby Allin, Matt Hardy, Keith Lee, Swerve Strickland, Ricky Starks, Powerhouse Hobbs, and Penta Oscuro. While Dynamite had a frankly underwhelming undercard, the conglomerate of competitors here definitely made up for it. 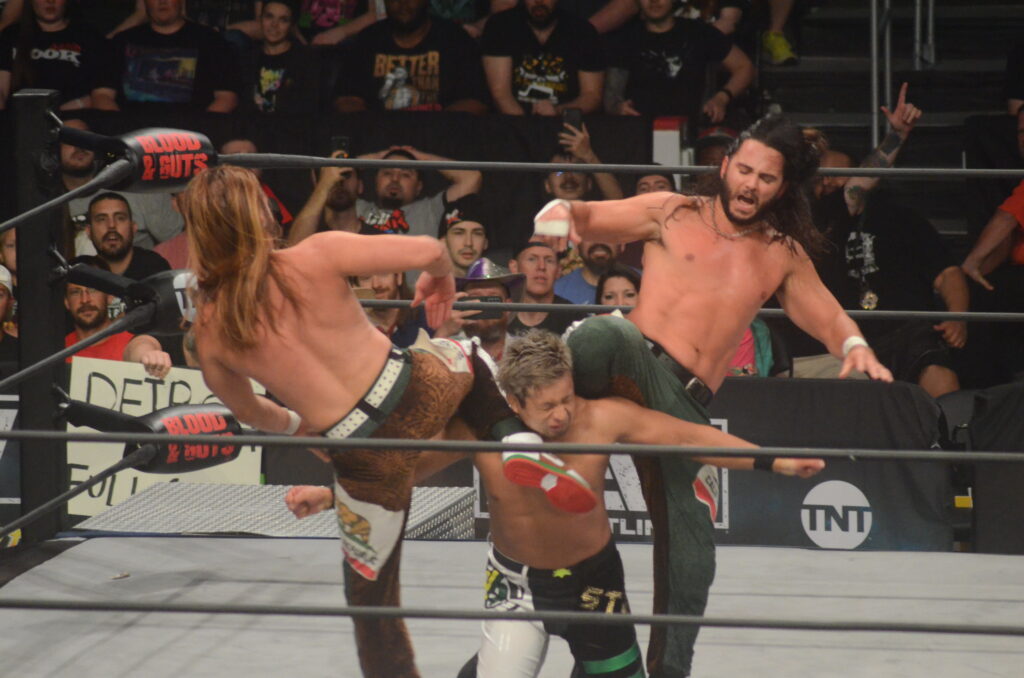 The Young Bucks deliver the BTE Trigger to Yoshi-Hashi. Photo by Brad McFarlin

The tag team bout between AEW World Tag Team Champions the Young Bucks and New Japan Pro Wrestling’s Hirooki Goto and Yoshi-Hashi began well past 11 p.m. Nick and Matt Jackson’s athleticism amazed as always, but unfortunately, I (and safe to say, everybody else) was pretty drained from a long four hours of wrestling, which started with AEW Dark: Elevation at seven. A handful of average matches there, the one outstanding thing worth noting was Jay Lethal and Satnam Singh – the 7’2” giant that could potentially make some waves.

During AEW Dark: Elevation, the crowd was greatly engaged and receptive, which is really attributed to seeing AEW live for the first time. All three shows offered big-time production and a contrastingly personal vibe – a feel different than any wrestling show that’s touring. Expletive chants and rowdiness were almost encouraged, and it’s the interactive experience that had Detroit clamoring for AEW to come to town.

AEW President and CEO Tony Khan, even, dropped a few f-bombs in his few rah-rah speeches between shows, where the notorious foot stomps and spastic personality were on display. Khan was equally as excited about his triple-header Blood and Guts event as we were to watch it, and his enthusiasm was inspiring. Like a mutualistic relationship, it was evident that AEW’s wrestlers and staff were feeding off of the audience’s incredible energy – which hopefully puts Detroit in the running for an upcoming pay-per-view. 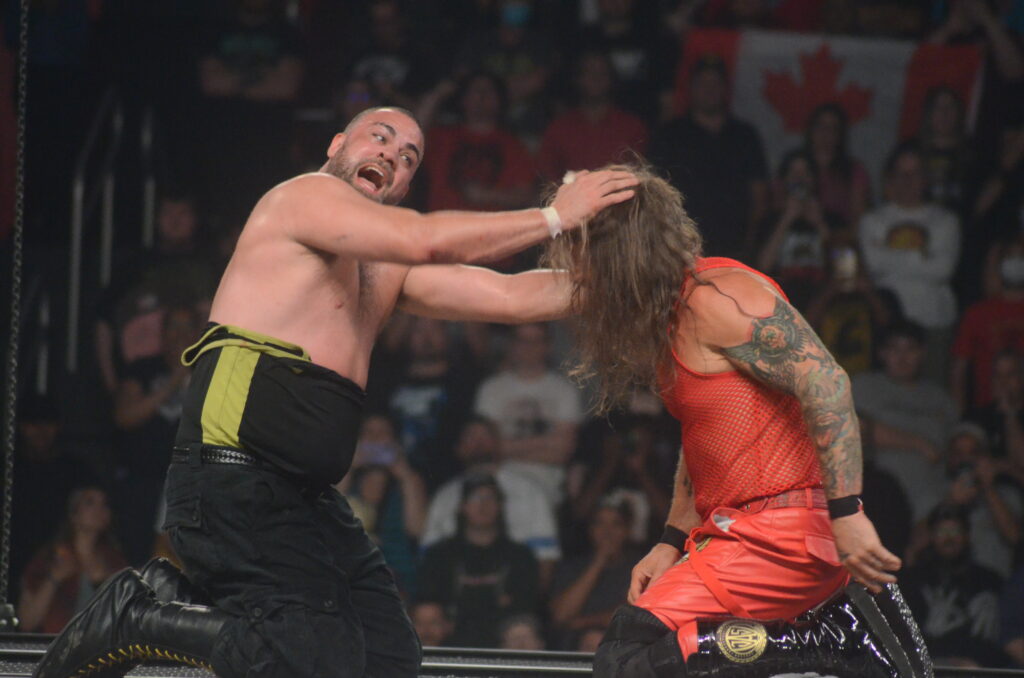 “Thank you, Detroit,” a battered Kingston uttered on the microphone after the Blood and Guts match. We understood the violence, we appreciated it, and we got it!