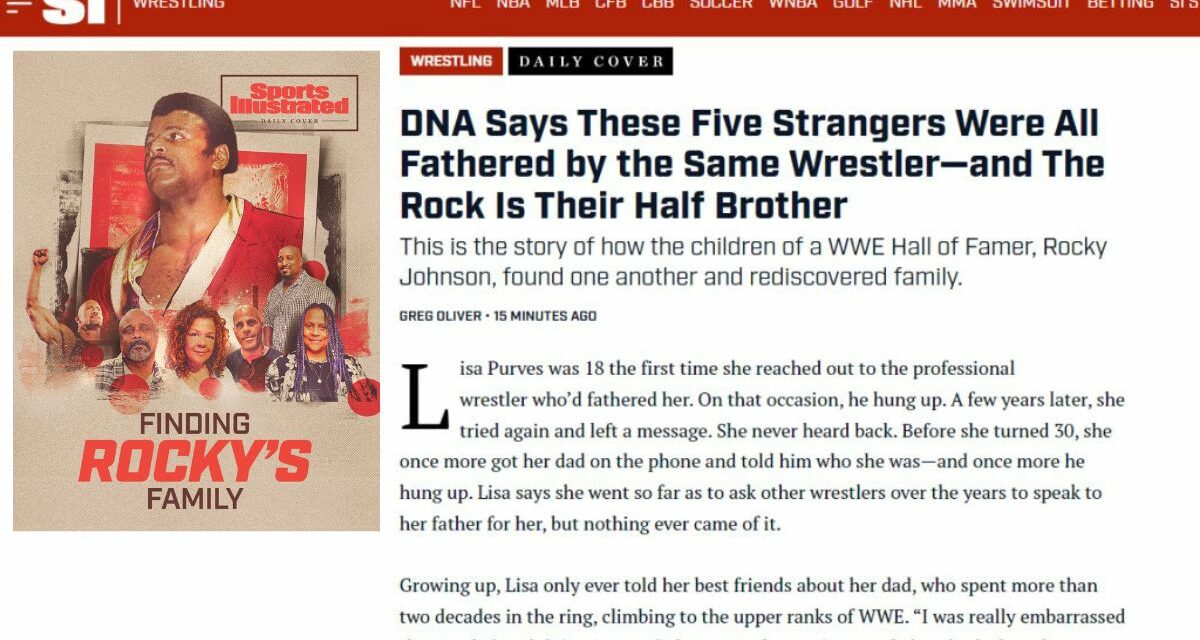 There is a story of mine at SI.com — “Finding Rocky’s Family” — today. It’s an honor to be associated with the Sports Illustrated name for the first time (aside from my name on the mailing label).

The story was uniquely mine, for so many reasons detailed below. And it decisively rewrites much of the hagiography of “Soulman” Rocky Johnson, the man born Wayde Douglas Bowles.

While everyone knows of Rocky’s son, Dwayne “The Rock” Johnson, and some know of his two children from his first marriage, Wanda and Curtis, few know of the trail of broken hearts and lives that Rocky left in his wake during his wrestling career.

He had out of wedlock children with five women, none of whom he ever truly acknowledged before his death on January 15, 2020.

In the SI.com story, you’ll meet Paula, Adrian, Trevor, Lisa and Aaron. Lisa, especially, is adamant that there are still other children out there that Rocky fathered and left behind. They are all remarkable people in their own way, and I am privileged to be able to share their story with the world.

But how was this my story to tell? Life is full of twists and turns.

Rocky’s brother, Jay Bowles, wrestled as Ricky Johnson and was one of the first wrestlers to let me into the inner circles of the closed world of pro wrestling when I was doing my Canadian Wrestling Report as a teenager. We have stayed close since.

Through Ricky, I have gotten to know many wrestlers and had many laughs too. Ricky knew I always wanted to meet Rocky, so when their relationship was on a positive phase — not always the case — we all met, with our wives, for dinner in 2003. What I really remember about that meeting was Rocky’s wife, Sheila, commenting how Rocky had stayed up the whole night reading the just-released book I did, The Pro Wrestling Hall of Fame: The Canadians. Rocky wondered especially about the photo I’d chosen of him, as it was his first publicity photo and he hadn’t seen it in forever. 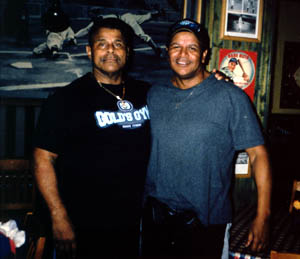 Rocky and Ricky Johnson in 2003. Photo by Greg Oliver

From that point on, Rocky was in my circle too, and we talked here and there, he’s profiled in The Pro Wrestling Hall of Fame: Heroes & Icons, and we even had breakfast at the Toronto hotel where he was staying when one of their brothers, Mervyn, was very ill and on his way out. He came to one of my Titans in Toronto dinners, the last one, where we celebrated the great Sweet Daddy Siki.

Along the way, I did the first wrestling-related interview with Dwayne, who was hiding in the back, out of the way, at a WWF press conference at Toronto’s SkyDome introducing Tiger Ali Singh, the son of Tiger Jeet Singh. How do I know it was the first and that The Rock remembers it? Because his mother, Ata, has told me so, and she has become a friend through our visits to the Cauliflower Alley Club reunions. 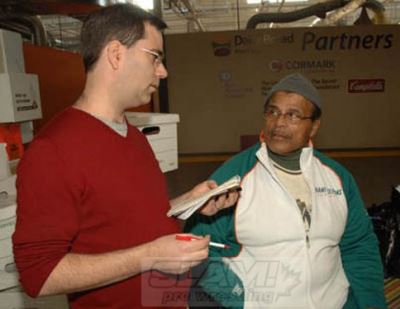 When Rocky Johnson wanted to write his autobiography, we talked, and I knew that on my side were all the connections to his family. He’d started down the road with another writer, and had a film planned too — the man thought big, and thought a lot of himself. We did up a contract with ECW Press to write it, I signed my copy and … nothing. In today’s words, Rocky ghosted me. I suspect part of the issue was that I knew too much. In one of our conversations, I asked about an email I got from Shayla Parsons in 2008: “I’m trying to get in contact with my grandfather Rocky Johnson, when he left Nova Scotia, he left behind his daughter (my mother), if there is any way to get in contact with him please write me back and let me know!”

Scott Teal ended up writing the book, and since Scott is a friend and a respected historian, that was fine with me. The headaches that came with it, like Rocky reneging on paying Scott and the book eventually getting pulled from shelves, well, I dodged a bullet.

That was so Rocky, in retrospect.

The love for him poured in, and those who tried to point out the negatives, like his inappropriate relationship with an underage girl and getting a cushy job through his friendship with the mayor of Davie, Florida, were drowned out by all the praise. 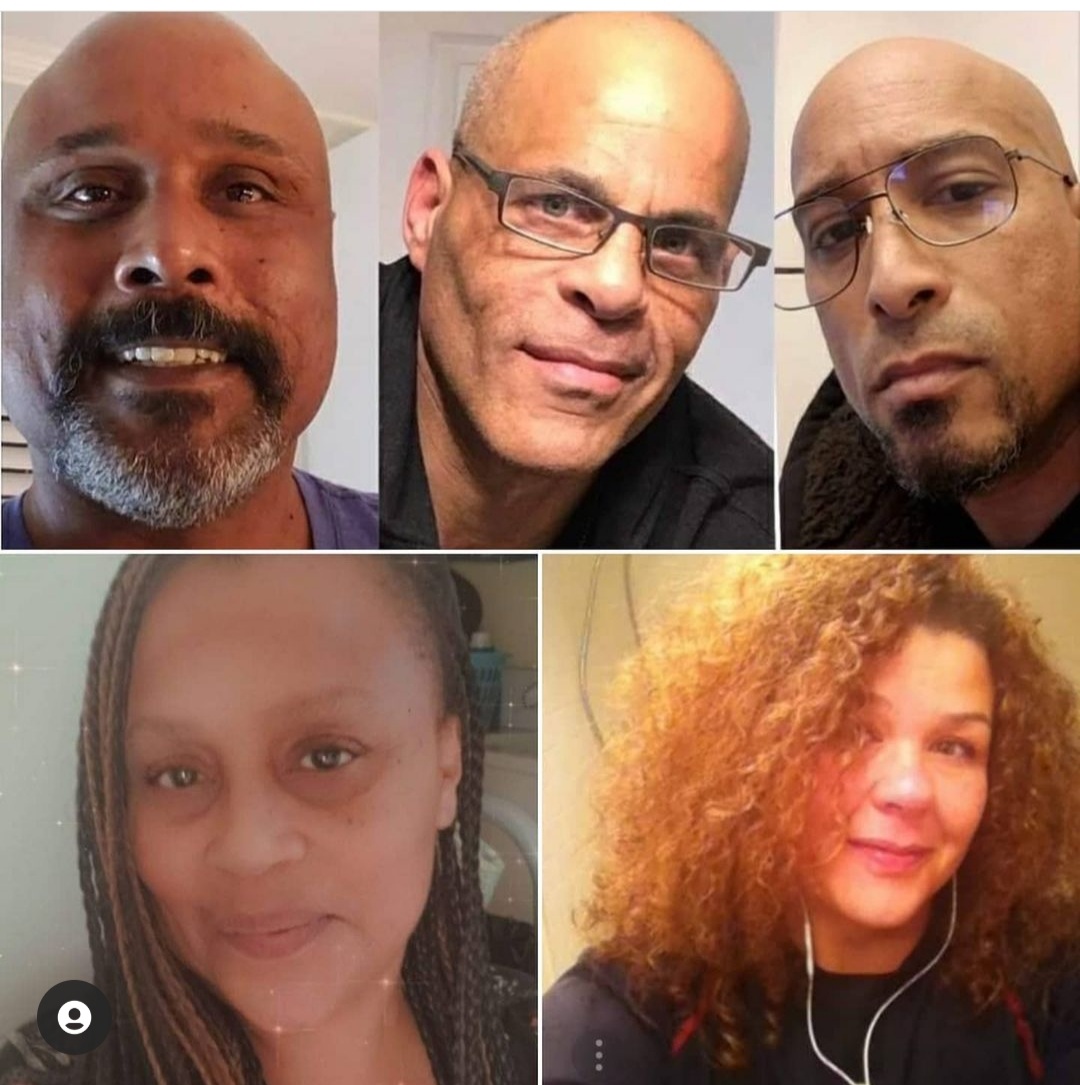 Hey, no debate from me, Rocky Johnson was one of the greatest pro wrestlers ever, and a trailblazing figure in the African-Canadian community, his lineage tracing back to the Book of Negroes, and slaves coming north from the United States. I appreciate that his story is out there, like in the book Amazing Black Atlantic Canadians: Inspiring Stories of Courage and Achievement, by Lindsay Ruck, and in a museum exhibit in his native Nova Scotia.

Thank you to Paula, Adrian, Trevor, Lisa and Aaron for bravely sharing their stories, and their relatives, named and unnamed, for contributing to the piece, and to the wonderful people at Sports Illustrated who saw this piece as worth telling and then worked hand in hand with me to make it a reality. And a gentle lob of a tennis ball to Jon Wertheim for the hook-up.

Go read the Sports Illustrated piece and let me know if your opinion of Rocky Johnson — the man — has changed.