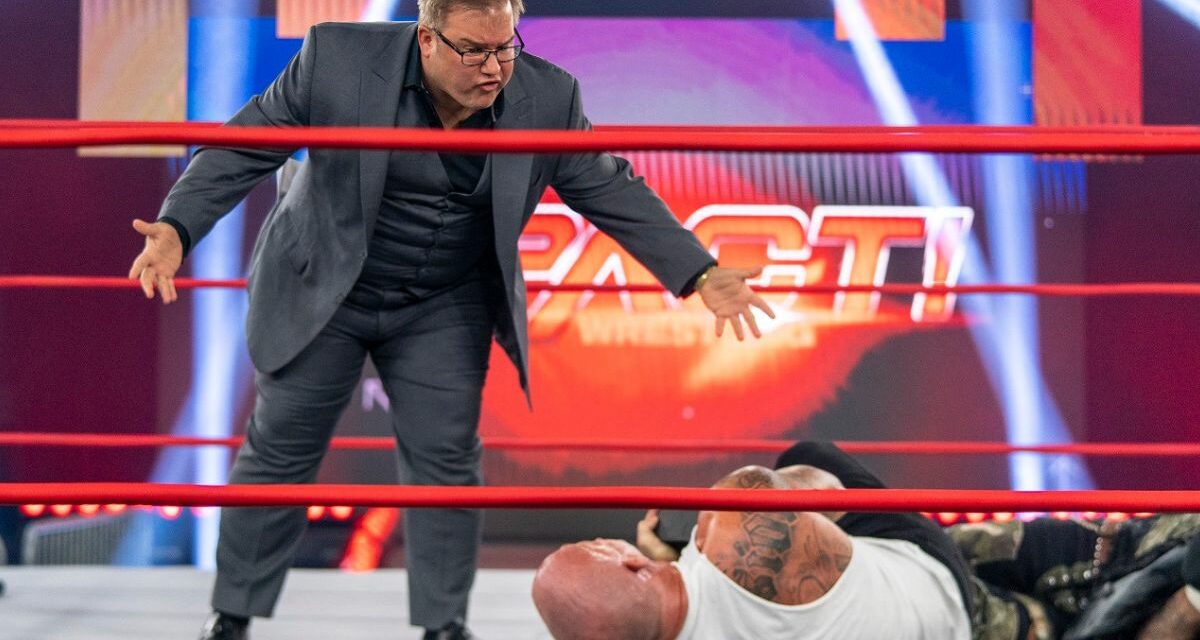 While Scott D’Amore may be the Executive Vice President of IMPACT Wrestling, he still thinks of himself as an educator. And two of his prized pupils, Eric Young and Josh Alexander, are in the main event of Sunday’s Slammiversary pay-per-view in Nashville.

“As a coach, which is what I always am at my core, and as a teacher, I think it’s amazing to be able to give people opportunities, and then it’s up to them,” D’Amore said on an Impact Wrestling Press Pass on Wednesday. “You can task them with going out there and doing it, you can do everything to support them, but ultimately it’s on them. So everybody who goes out there and succeeds, succeeds on their own, just with the support and the opportunity being given to them.”

Young challenging for Alexander’s Impact World Championship “completely” encompasses that philosophy, said D’Amore, adding that they “are two people who personally I’ve been as close to as just about anybody in this industry.”

D’Amore, who has trained students out of his Can-Am Wrestling facility in Windsor for decades, knew both Young and Alexander from the Ontario circuit.

“You’ve got Eric Young, who I’ve known from when he was literally a kid. And to watch him come up in wrestling like seeing him on indies,. ‘Oh, he’s a good indy wrestler.’ ‘Oh, maybe he’ll do something.’ … This guy is a world champion multiple times over and is well rounded, and is as underrated a wrestler as I think there’s ever been,” said D’Amore.

“Then Josh Alexander and I mean, books could be written and movies will be written and produced about Josh’s life and what he’s done. His story’s been documented from an insecure, overweight kid to an aspiring wrestler who had it all ripped out of his hands through injury and circumstance and have to find his way back, not just to being able to do his passion, but to be arguably the very best at it in this sport,” he said, summing up the title bout on Sunday.

“It’s two unbelievable athletes, it’s two people that as great as they are, as athletes, despite Eric Young’s crappy attitude sometimes, and slapping me around once in a while, which I don’t really like. Two people that just have a body of work that shows that they’re the type of individuals that should be in this business and make this industry as great as it is. And I’m excited to watch them take center stage in the 20th anniversary of his company, and go out there and just rock the house like everybody else from top to bottom will.”

Since D’Amore has been around for many, many of the 20 years of Total Non-stop Action/TNA, Global Force Wrestling, and, more recently Impact Wrestling, he is in a unique spot to be able to comment on the changes. For one, he’s not Coach D’Amore on-screen with the Team Canada faction (Young, Bobby Roode, Johnny Devine, Teddy Hart, A-1, Petey Williams and a couple of others at various times) — a team he called as “talented a group as there ever was.”

When TNA started, it was told it was never going to survive, so he sees Slammiversary as a triumph, and told host D’Lo Brown as much. “Slammiversary every year has been a celebration,” D’Amore noted.  “I was there that first year, I think you were as well, D’Lo, at the Asylum, the very grounds we’re returning to now 20 years later.

“This year, uniquely special because it’s not just a celebration of overcoming the odds and being here, like it has been so many years, it’s 20 frickin’ years. It’s one of the longest running national companies in the history of our industry. It’s one of the longest running television shows in the history of television,” he said.

D’Amore has come and gone from the company, but specifically recalled a moment in 2005.

“They proclaimed TNA wrestling in the early days dead before it started, and then after just six weeks, and it was never going to last a year. God bless him, Uncle Dave Meltzer. I remember in 2005, when I was taking over steering the ship the first time, I saw that his headline, the first line was ‘by the time you read this TNA wrestling will be out of business.’ And thankfully him and everybody else was wrong.”

The early weekly pay-per-views were at the Asylum on the Nashville Fairgrounds [read Bert Prentice’s book for great insight into how that came about], and it’s there again, though in a different building.

“Here we are, we return to Nashville to, not the exact same building, because it’s gone. But to the grounds where that Asylum was, where we had so many amazing memories in those early days,” said D’Amore. “And we’re going there 20 years later, still celebrating some of the innovation and some of the history and some of the current as well as future moments — we’re going to be making an impact for a long time to come.”

D’Amore noted some of the things TNA did over the years worked out and some didn’t (and pulled out a photo of him with CM Punk as an example of someone who made it).

“King of the Mountain, for better or worse in some people’s opinions, and they vary, it’s been a huge part of this company. And now it’s our Knockouts’ chance to go out there and work their way through these rules in our first ever Queen of the Mountain,” crowed D’Amore. “We’re having Ultimate X, which is one of the biggest staples of this company. I mean, it’s the one match that exists in Impact Wrestling and really nowhere else. It’s our creation and it’s our baby.”

There’s one match on the card that makes you go, ‘Huh?’ admitted D’Amore.

“Those tough moments are as memorable as those great moments and they all come together to form the rich history of this company.”

EDITOR’S NOTE: Watch for a Countdown to Slammiversary in the coming days.