Young-Alexander have love-in before Slammiversary 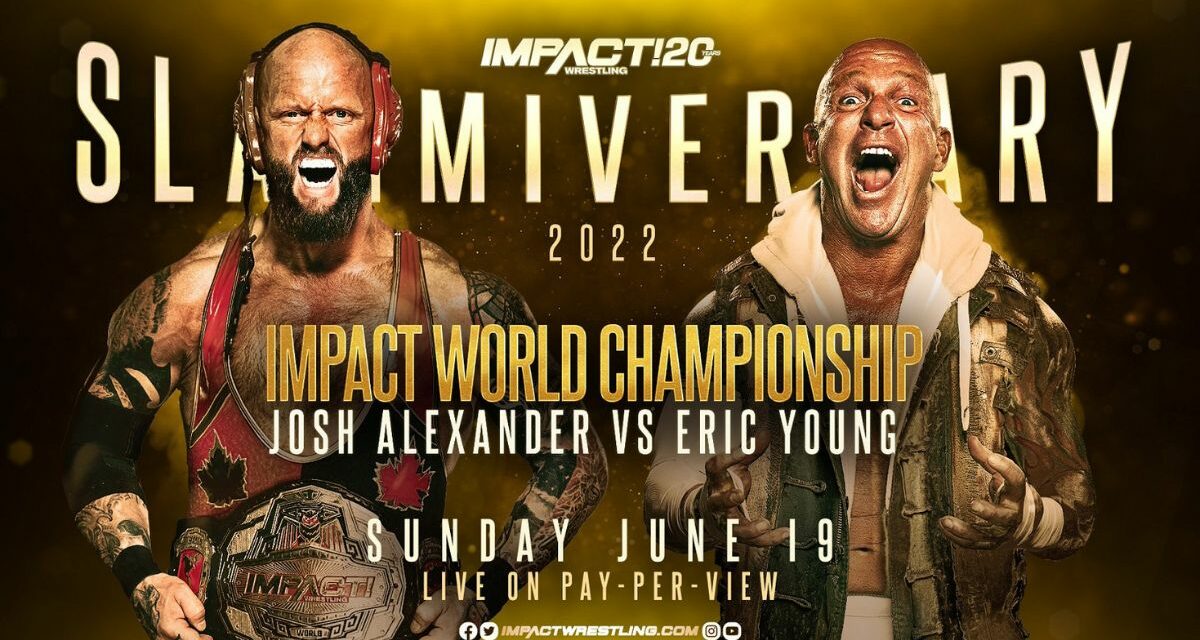 There are times where a main event of a show is contested by people where you know that they don’t like each other. Bret Hart and Shawn Michaels is an excellent example.

On a media call on Wednesday afternoon to promote Slammiversary, Alexander and Young conducted more of a love-in than anything else, praising each other, celebrating the company on its 20th anniversary, and reminiscing about their similar journeys (“Here we are, two short and chubby kids from southwestern Ontario,” quipped EY) — which will see them collide one-on-one for the first time ever, which is definitely surprising given their shared southern Ontario roots.

“Me and Eric Young have traveled different paths but we’re converging for the first time,” said Alexander at one point early in the call.

The 42-year-old Young has done a lot in Impact Wrestling — almost everything, in fact. When he agreed to a contract with the company, then called TNA, in 2004, he didn’t read it. “The thing I remember the most was signing my contract in the dark, on Bobby Roode’s back,” he shared. Roode also signed that day. Young is a two-time TNA World champion, an X Division champion, a four-time tag team champion, and even won the TNA Knockouts tag team titles with ODB. Plus there were the specific TNA events, like the King of the Mountain Championship, the TNA World Beer Drinking Championship, and the TNA World Cup of Wrestling.

Having left Impact, thrived in NXT and disappeared in WWE, Young wants to be back on top. He’ll have his Violent by Design allies, Joe Doering and Cody Deaner, at his side in the bout in Nashville on Sunday.

“For me, it comes down to the power and control of being the World champion. That’s what I crave. This is the reason I got into wrestling. This is the reason I still love it,” said Young. “This is the reason I still push myself at an accelerated age. This is my whole reason for living. I crave the responsibility, I crave the pressure. And I can say this, honestly, without a doubt in my mind, you will regret if you don’t watch this pay-per-view, you will regret if you don’t see this match. You will forget everything else that you know or think about this company” — that was a theme, putting over Impact — “and respect for me, respect for Josh, and respect for Impact is something that we will earn. And I know both for Josh and for myself, there will be no question, at the end of June 19th, that you’ve watched and witnessed something special and something that you have no choice, but you will want to be part of going forward.”

Alexander, as the World champ, said something similar in response.

“I think that both myself and EY have two different things to prove. I have to prove that I belong as a World champion, as a figurehead of a company. I need to do that by going out there against people who have done it all, like EY, people that have recognition around the world as being championship material. That’s the thing that weighs on me. That’s what I have to prove to the world. I think EY, whether you want to admit it or not, you have to prove that you have not peaked in your career, and you’re not on the downside of that other side of the slope. You said you’re at an accelerated age and all this stuff, I’m not taking anything away from you athletically, you’re coming off that knee injury last year, and you definitely have something to prove there. And I know that coming into that, I know what I have to deal with that, because I know you’re as crazy as I am. And both of us collectively, we need to prove in that main event that Impact Wrestling is the very best wrestling on Planet Earth and I don’t doubt we’re going to do that I completely, wholeheartedly agree that everybody will regret not watching this match live, not being a part of it live because it is going to be something special because of those things that we have to prove that fuels us.”

Young was asked how the 2022 version of him is different than his first go-round in TNA. He said he was now “a much more confident version of who I was,” but added that he always had confidence. “I knew that I was good at this, I knew it in my bones.”

Alexander (Josh Lemay) is 36, but has not had the spotlight on him nearly as long as Young has had, in part, because of injuries and a retirement. This will be his fourth Slammiversary, after holding the company’s tag titles with Ethan Page as The North and Impact’s X Division title.

“My whole story has been about adversity, and everything over the years, whether it be injury or circumstance or anything. And then even in big matches, I’ve always been kind of the underdog going into most of these matches, even most recently the one with Moose,” said Alexander. “The thing that always carries me through is my heart and my passion and it’s because of this obsession for pro wrestling — and that’s where the respect between myself and EY is. We both have one of the most insane obsessions for pro wrestling and it shows in our work ethic and the way we carry ourselves as professionals. But when we’re in there in that ring, one on one, the respect doesn’t go out the window, but it certainly doesn’t matter as much, because as much as pro wrestling is what it is, I’m a maniac, and I’m very competitive. And I think that’s one thing that has set me apart my entire career, that’s going to be no different at Slammiversary.”

Young is the one that came closest to saying something mean, and, really, it was a Canadian mean.

“I don’t want this to be lost, me and Josh obviously have a healthy respect. We’ve crossed paths on several occasions, we work at the same company. But I’m not afraid to hurt him to take what I want. And I know that he will do the same,” said Young. “And he’s got a family and kids, and he loves them. I don’t have that. Wrestling is my life. It’s the first thing that I loved, it’s the only thing that I love. And being the World champion is what I desire more than anything in the world. And I am not taking anything from him. I know that it means the world to him. And I would be a fool to think anything different. But my plan, and things usually go the way I want, I will leave June 19 as the world champion, because that’s what I want more than anything on Earth.”

EDITOR’S NOTE: Watch for a Countdown to Slammiversary in the coming days.