NWA POWERRR starts the new season with a KnoxOut 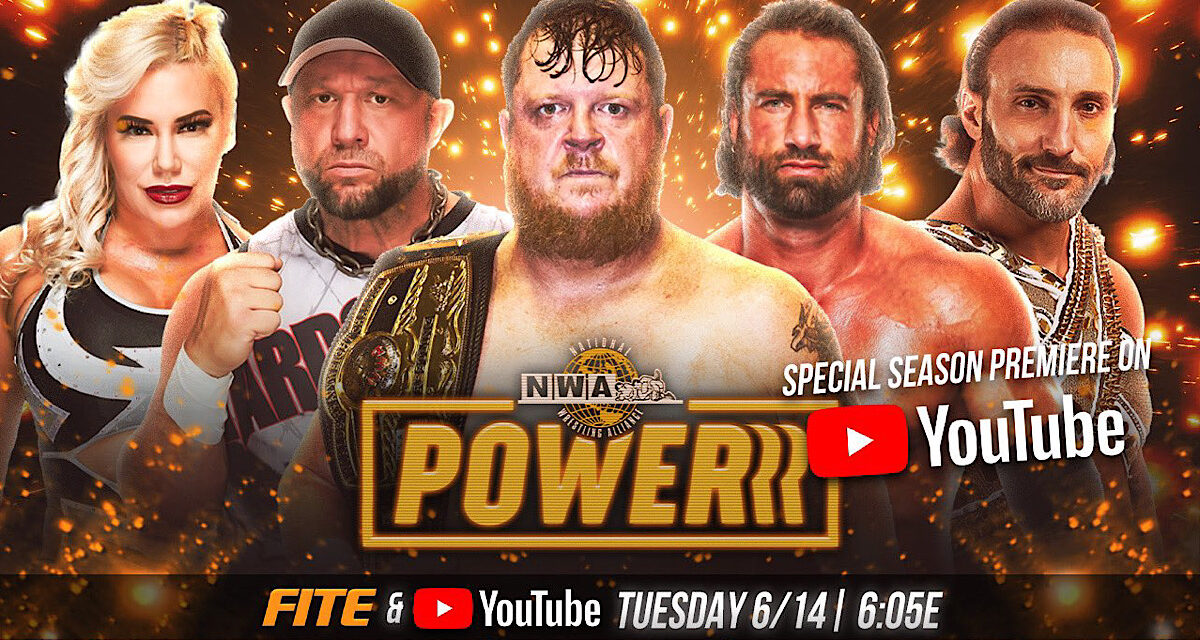 After three days away from the Alwayz Ready pay-per-view event, the National Wrestling Alliance wants to start off NWA Powerrr on a high note with Taya Valkyrie in action against Taryn Terrell and The Cardonas facing Chris Adonis and Thom Latimer for the first time in tag action. If anything, this show looks like it’s getting to Strictly Business.

We’re coming to you from the Knoxville Convention Center in Knoxville, TN. Joe Galli, Tim Storm and Velvet Sky have the call, and welcome to KnoxOut.

The show starts with Kyle Davis in the center of the ring, and he brings out Bully Ray as the master of ceremonies, and he definitely looks a lot slimmer than the last time we saw him. He thanks Billy Corgan and all the fans, asks them to chant “NWA” instead of, “ECW.” It’s a lot of fun for the MC, but then The Cardonas come out and VSK and Mike Knox crash the party. They’re all smiles, and Knox hugs his Aces and Eights brother. Knox remembers the good times…and launches in a tirade by saying Bully Ray was a complete piece of trash, leaving the Aces high and dry all those years ago so he could get a legends contract with WWE. Bully Ray tried to respond, but Knox slaps the mic away, and keeps on saying he will not forgive him for leaving him to starve.

Bully Ray sincerely apologizes for what he did in the past and he’ll shake his hand in forgiveness, but Knox clobbers him to the mat. VSK grabs a table, and Knox choke slams into the table. Gimmick infringement, aside, refs and Tim Storm go to check out Bully Ray, and this is a helluva way to be hosting the show.

As we try to get some semblance of order, Galli show us a taping from earlier today, where Trevor Murdoch calls out fans to support food banks for people still affected by the pandemic. For reasons unknown, Rush Freeman gets in his grill and tells the NWA champion that he started a fight and he and his big brother have a got a problem with him. Murdoch rightly beats Freeman down, and then his “big brother” gets in on the action (so imagine if Freeman was left in the dryer on high, and then shrunk. That was the visual here. A pop up powerbomb later, and “big brother Freeman” was neutralized. Well, that was…yeah.

May Valentine was backstage earlier with Chelsea Green and Matt Cardona. Cardona talks about relinquishing the belt and says Murdoch is keeping the belt warm for him. Never lost the belt, and trusts Billy. Green says they’ll never forget what Billy said in the ring, and boy that felt ominous.

Next up, May Valentine is with Luke Hawx. He’s fired up about The Fixers attacking his boy and Homicide. But, his anger is placed at a Homicide for not checking on him and PJ after the attack. He feels like he was disrespected by Homicide, and he’s got his number. I sense a new challenger for the NWA Junior Heavyweight belt.

There’s been a lot of talking, so let’s get to the action for your First Match of the Night and it’s… 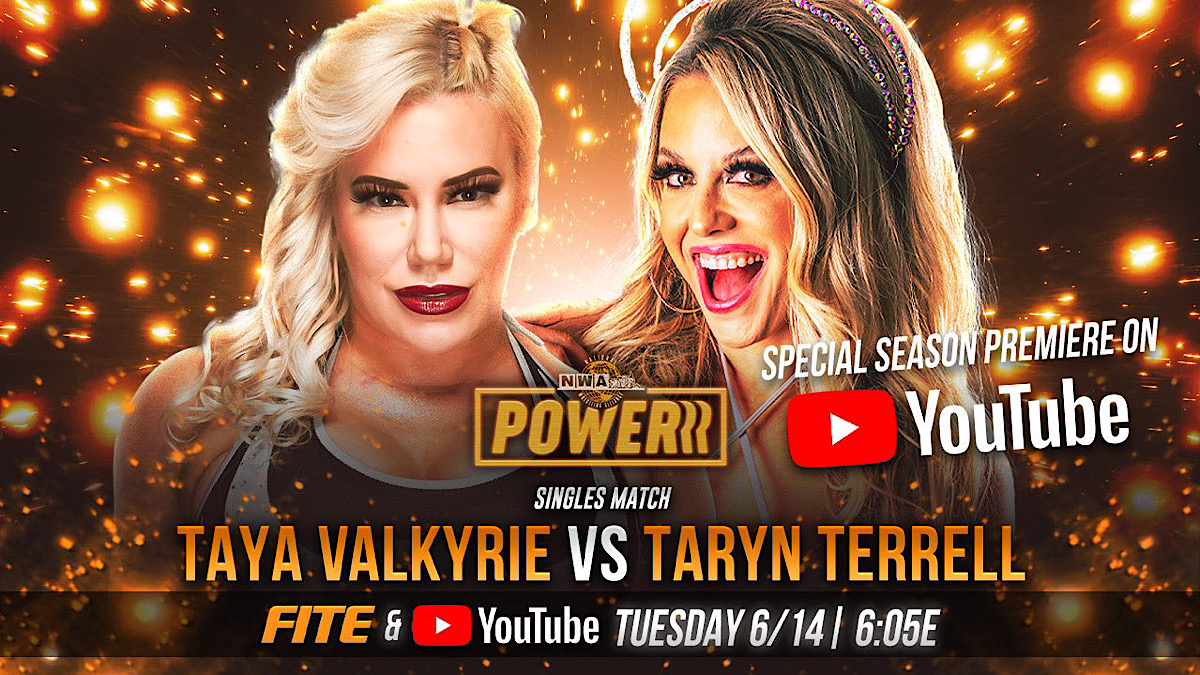 Terrell starts away with mind games, and tossing Valkyrie ring gear, and that dog won’t hunt, as she tries to pull up Terrell’s skirt, hockey-style to give her a beat down. The majority of the match is Valkyrie just going to work chopping away at Terrell’s chest. Valkyrie follows with a hip attack and a Meteora for a two count. Then Valkyrie adds to the abuse with a pandemonium suplex. Terrell tries to blindside her, and rightfully runs away. Valkyrie gives chase, and gets in the ring where Terrell catches her with a stomp and kicks in the corner . Terrell manages to get Valkyrie in the camel clutch, but she is just too powerful and backs into the corner turnbuckles. Valkyrie attempts with a schoolgirl for a two count, and then a double hair bomb knocks both women out silly. Back on offense, Valkyrie lands a wicked a curb stomp and Covers Terrell, who kicks out at two. Terrell fights back with a stunner for a two count, but Valkyrie takes her to the Road to Valhalla for the three count.

Your Winner via Pinfall: Taya Valkyrie

May Valentine is with her favorite person (note the sarcasm, kids), Natalia Markova. The Frush states she thought it was easy to beat Valkyrie, and now she has sights on Kamille. Markova believes she deserves The Burke and she only gets the best. She’ll go through KiLynn King and anyone in her way (and she mangles the words a bit near the end), but says she’ll prove she is the best in the NWA.

May Valentine is with KiLynn King on her match with Kamille for The Burke. King agrees that while she didn’t win, it was the best match of the night. King also notes that after Alwayz Ready, Kamille needs to take her seriously. She’s gonna climb the ranks and prove she deserves another title shot again.

The Knoxville crowd is ready for the Main Event, and it’s … 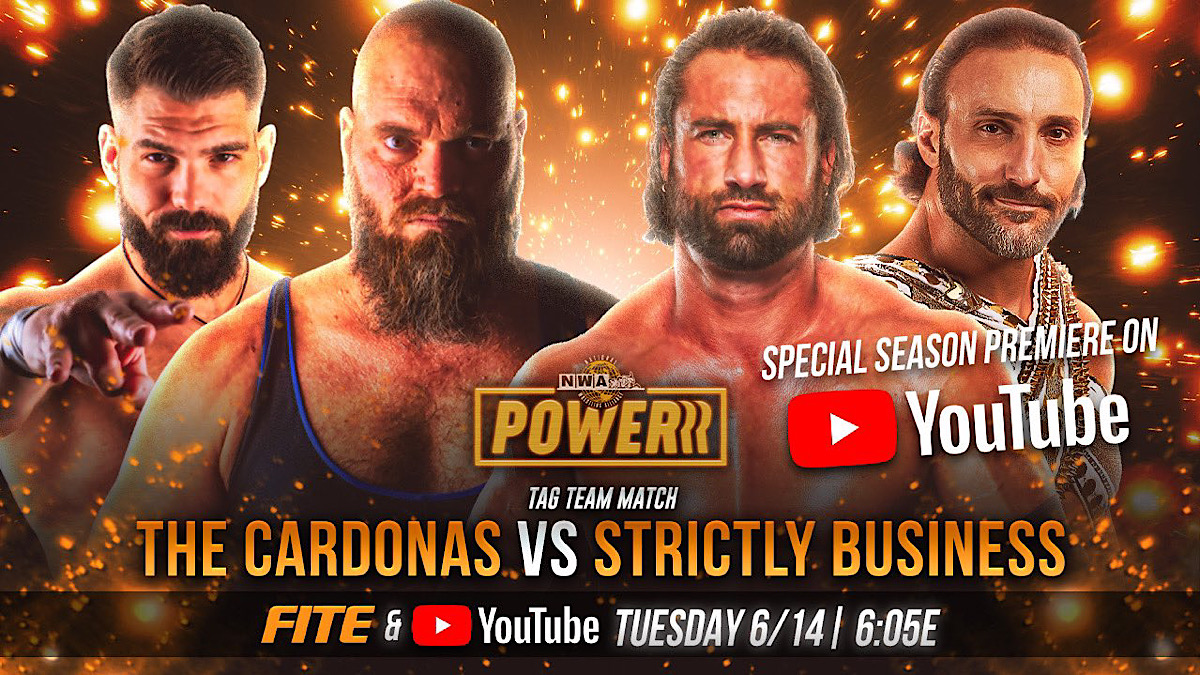 As Galli mentions, this is the first time Latimer and Adonis have teamed since the breakup of the Strictly Business faction, so it’ll be interesting if they can be on the same page.

The bell rings, and Latimer and Knox start off in the middle and neither man cuts any slack. VSK tags in , but Latimer is able to run roughshod over the Cardona member. Now Latimer gets a tag to Adonis and a delayed vertical suplex for a two count. Adonis goes back on the attack, but a thumb to his eye stops the momentum and VSK gets big Knox back in. Adonis is still more than a match, but when a kick to his back on the outside by VSK takes his focus off, a running crossbody by Knox manages to take the wind out of his sails.

The Cardonas with tag team continuity makes Adonis a Masterpiece in Peril? Knox is taking the fight to Adonis, but then both men land a double clothesline that knock them out. Adonis crawls to his corner to get the hot tag, and Latimer is Evil en Fuego, as he cleans up the house. Latimer keeps on VSK, but he gets a schoolboy roll up with a handful of tights, but the ref catches him red handed in the act. From there it turns into a Pier four brawl . Knox sends Latimer tot the outside and sends VSK to a corner splash, but Adonis catches him in the Masterlock. Knox tries to help, but now gets caught in the Masterlock as well. Latimer gets back in the ring and delivers the powerbomb on VSK to send a message to the Cardonas for the one, two, and three.

Your Winners via Pinfall: Thom Latimer and Chris Adonis

Looks like the former stablemates are still all about Strictly Business as the show goes to credits.

Not a bad show, but not anything that would knock my socks off either.  The matches were good, but the talking was a little on the heavy side, for my taste.  We’ll see where this leads to in the weeks ahead.