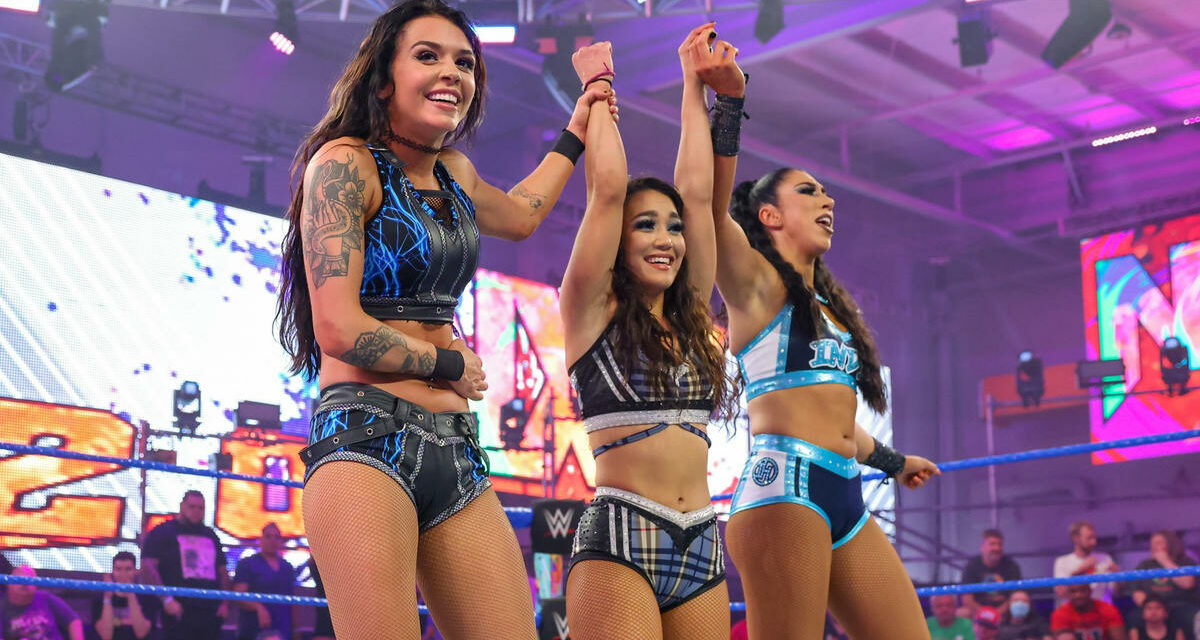 NXT is heading toward the Great American Bash, and I only know that because Vic Joseph told me so. Speaking of the announcers, NXT 2.0 has a much looser dress code than RAW and Smackdown. Vis out here rocking a T-shirt. I haven’t watched NXT since it evolved into 2.0, so let’s just get right to it.

This is the first title defense for the Creed Brothers, but they don’t show any nerves with Brutus nearly getting the pin right after the bell. Wade Barrett points out on commentary that Roderick Strong (I know that name!), the leader of Diamond Mine, isn’t pleased that the Creed’s just handed out this title match. Strong may have a point, as Blade and Eofe put up a solid fight. Julius Creed catches Blade in mid air on a cross body and slams him to the mat. Brutus tags in and hits a sliding clothesline and covers for the win.

After the match, the Creeds show Blade and Eofe respect.

Back in the lockerroom, Cora Jade, Roxanne Perez and Indi Hartwell are preparing for their match. Perez assures Indi that she isn’t a thrid wheel. They all have the same goal; take out Toxic Attraction.

Apollo Crews is beating up unruly customers in diners now? Okay, I can support that.

Straton immediately ducks behind the ropes as Henley chargers her. Fallon wants revenge for getting knocked out of the Breakout tournament. Henley gets her shots in, but Straton over powers the smaller Fallon. Henley keeps throwing punches, knocking Tiffany to the mat. Straton hits a double stomp. Straton gets Henley up on her shoulders and hits a fall away slam. Wendy Choo bounces to the ring and tosses a handful of confetti in Straton’s face. Henley uses the distraction to role Straton up and get the pin.

Cameron Grimes is walking through the back and people are offering sympathy for his loss at In Your House. Cam isn’t interested in that even coming from the champ, Bron Breaker. Duke Hudson tells Bron not to go putting ideas in peoples’ head. This leads to Duke getting a title match, tonight.

Lash Legend is done with Alba Fyre. Legend was quite the athlete in high school and college. Next week she is going to put out the Fyre.

Quinn hangs Lee on the ropes and pummels him. Lee runs into Quinn, hitting him like a brick wall. Lee flips over charging Quinn and catches him with a back heel kick. Lee goes up top and hits Spiral Tap. He covers and gets the three count.

The Dyad w/Joe Gacy vs. Dante Chen and Javier Bernal

Well, Chen and Bernal don’t even get an entrance and we can’t even see the faces of the Dyad. The are wearing full hooded masks.  Despite being developmental talent, Chen and Bernal get their licks in. The Dyad proves too strong, though. They double team Chen, hitting him with an assisted elevated DDT to get the pin. Gacy gives a nod of approval.

Winners via pinfall: The Dyad

After the match, Gacy praises the Dyad. He announces that their is a schism between NXT and the three of them.

In the back, Xyon Quinn isn’t happy that Sanga tried to talk to him, but Sanga has found his next opponent.

Nikkita Lyons is training like crazy to return to the ring.

The D’Angelo family make their way to the ring for a special ceremony. Carmelo Hayes and Trick Williams interrupt. Melo knows that Tony wasn’t talking about his title. Williams and Hayes don’t take kindly to threats. Tony says he calls the shots and next week he will face Hayes for the North American championship next week. This week, Stacks and Two Dimes want to soften them up.

Toxic Attraction will show tonight why they are the most dominate group in NXT.

Hudson attacks Bron before the bell. The ref calls for the bell and Breaker dismantles Hudson. The champ spears Duke into the corner and then picks him up. After a power slam, Bron makes the cover and gets the pin.

After the match, Cameron Grimes makes his way to the ring. The two have a nice conversation that ends with Cam getting a NXT title match at the Great American Bash.

Ivy Nile tells Tatum Paxley to keep up the work. Roddy Strong wants to know what up. He doesn’t want any excuses. He then gives the Creed Brothers a hard time for showing their opponents respect. The Creed’s got Strong a match next week, even if he has a bum ankle. No excuses, though.

Robert Stone calls Brooke Jensen a cheater, even though he beat Von Wagner. Next, week Von will dominate Jensen one on one.

Vinci wins his debut match with a sit out powerbomb to get the pin.

Cameron Grimes isn’t happy that Edris Eofe and Malik Blade aren’t upset over losing their title match. Grimes tries to impart on them that it isn’t ok to leave before the main event and the show ends. Grimes tells them that they aren’t hungry and he is afraid that they will waste their talent.

Lorenzo misses a leg drop, allowing Williams to get the hot tag. He takes out Stacks and hits Williams with a spine buster. The Family tries to intervene, but Williams is taken out by his ally. Carmelo Hayes goes up top and hits a flying leg drop. He covers to get the win.

After the match Tony isn’t pleased, yelling at Escobar, Wilde and Cruz.

Jade and Rose lock up. The ref separates them and Rose retreats to the rope, allowing Jayne to tag in. Jade ducks a couple of haymakers, but runs into a neck breaker. Jade with a chin breaker, but Jayne falls into her corner. Rose tags in along with Hartwell. She applies a top wrist lock. Rose reverses the hold. Hartwell with a hammerlock and then slams Rose to the mat. Mandy rolls to the floor to regroup. All six women slip into the ring and Toxic Attraction is sent to floor.

After the break, Perez is trapped in the corner. Jayne misses a kick but catches Perez with a right. She follows with a senton. The two trade chops in the middle of the ring. Jayne unloads with forearm shots. Hartwell gets the tag and takes down a tagged in Rose. Jade tags in and takes down Rose with a head scissors. Cora with a rising knee strike. Jayne with a cheap shot from the apron, so Jade responds. Rose takes advantage to hit a spine buster. Dolin tags in, keeping the pressure on Jade, not allowing her to tag in a partner. Jade and Rose take each other down with clothesline. Cora makes the tag, but the ref never saw it. Jade gets triple teamed behind the refs back. Dolin with an a bow and arrow. Jade breaks the hold, nearly getting the pin.

Perez gets the hot tag. She takes down Dolin with a Thesz press. She follows with a leg sweep, but Jayne runs in to break the pin. Hartwell takes down Rose with a right and tosses her from the ring. Hartwell follows with a clothesline on the floor. Jade tags in, hitting a senton on Dolin. Perez tags in and quickly covers Dolin. She gets the three count.

The show opened with a very good tag team championship match and ended with a very good six woman tag team match. Everything else in between left something to be desired. Maybe it’s because I don’t watch NXT 2.0, but this show certainly didn’t do anything to make me want to watch week to week. The show was only two hours, but it sure felt longer than that.