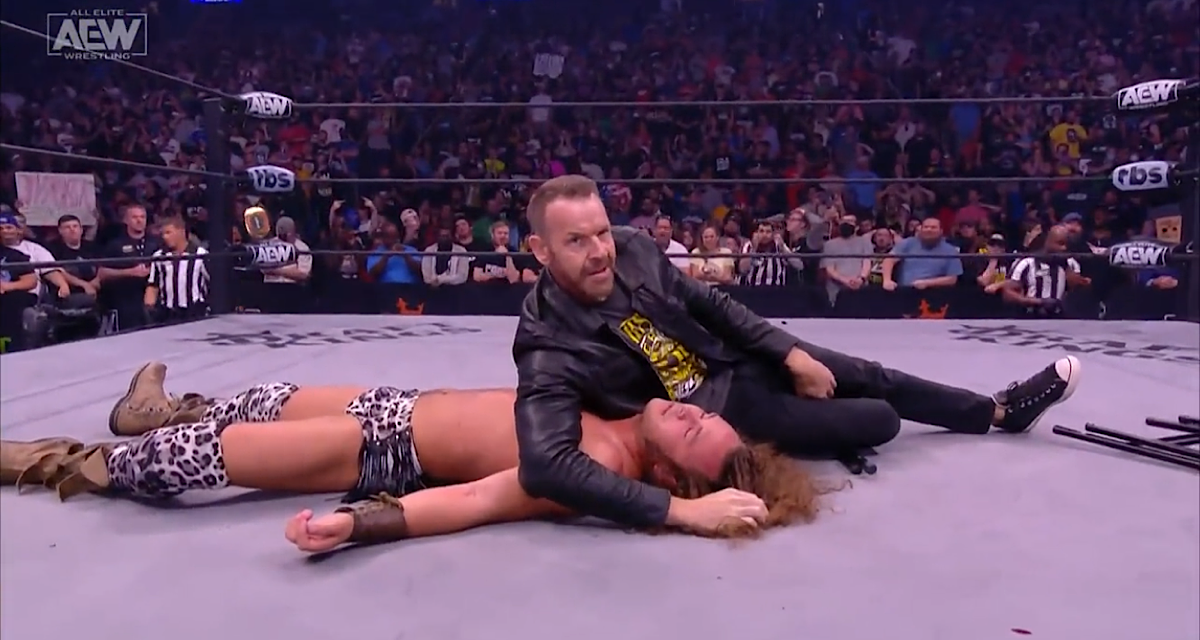 Injuries and suspensions have been plaguing AEW as of late, and cards like Forbidden Door on June 26 continue to be changed on the regular. Apropos, our Tuesday and Wednesday night reporters have switched shows for this week, and I selfishly boast getting the longer stick as AEW Dynamite heads to St. Louis, Missouri for Road Rager!

St. Louis is hot for tonight’s opening hair-versus-hair match, a stipulation that Jericho is undefeated in according to Excalibur. Blackpool Combat Club’s William Regal joins his side as Eddie Kingston and the Jericho Appreciation Society – the recognized symbol of “sports ennerdainers,” are stationed at opposing corners. Following picture-in-picture, Ortiz tears his tank top and fires up the crowd in a fairly even matchup, but Jericho comes back with a Codebreaker for two. “Where the hell have you guys been?” correctly questions Jim Ross when Satana and Wheeler Yuta finally even the odds while Kingston backhands Jericho in-ring. St. Louis loses it when Jericho kicks out but is stunned when Fuego Del Sol attacks Ortiz with a bat. Jericho picks up the win, and while everyone thinks the Jericho Appreciation Society has gained another flunky, the masked man reveals himself as former Inner Circle member Sammy Guevara.

Ortiz takes the clippers from AEW’s hired barber, shaving his own dreads off while repeatedly screaming “Blood and Guts!” Even though aging, balding rockstar Jericho was never losing tonight, the Sammy swerve was a good one.

A tongue-in-cheek package proceeds Wardlow’s entrance, which features a new heavy-metal theme song for “Mr. Mayhem.” The stipulation is messy enough, but announcer Dasha Gonzalez wrongly declares the elimination of four men, which sours the whole deal instantly. Meanwhile, attorney “Smart” Mark Sterling watches his 20 security guards get smashed, stacked, and pinned single-handedly until all have been eliminated. In theory, this was cool, but in reality it was an awkward watch.

Wardlow looks to attack Sterling until Dan Lambert starts talking from his skybox with TNT Champion Scorpio Sky. He brings former UFC stars and St. Louis natives Matt Hughes and Tyron Woodley into the ring, but they instead send poor Sterling into the hands of Wardlow for a powerbomb.

Dax Harwood vs Will Ospreay

Pitting two of the world’s best in a standard weekly television match is an AEW specialty; both men are wearing gold, but funnily enough, neither are for AEW or NJPW. Loud “let’s go Ospreay” and “let’s go Dax” chants accompany the opening goings, but the NJPW competitor gains the advantage preceding picture-in-picture. They trade big maneuvers and close near-falls, and eventually, a Liger Bomb from Harwood brings the audience to its feet. Strikes are exchanged, and Ospreay hits the Oscutter for two, but the Hidden Blade puts it away. “That was a hell of a wrestling match, guys,” says Jim Ross, and it’s as precise a statement as the two outstanding competitors’ wrestling chops.

United Empire’s Jeff Cobb, Great-O-Khan, and Aussie Open surround Harwood, and Cash Wheeler and Roppongi Vice try and fail to make the save. To a great reaction comes the returning “Freshly Squeezed” Orange Cassidy, who stands face-to-face against Ospreay. A lot of AEW wrestlers could fill the dream match scenario with Ospreay at Forbidden Door, and Cassidy would certainly be… a choice.

A nice video package highlights the unlikely circumstance that will finally bring Jon Moxley and Hiroshi Tanahashi together – a match that has legitimately been postponed and brewing for years. Their pre-Forbidden Door meeting comes after the break.

“Holy sh-” chants erupt when Jon Moxley and Hiroshi Tanahashi meet in-ring. “You are going to call me ‘Ace,’” Moxley says after a great promo as per usual. But Chris Jericho interrupts with Sammy Guevara and Tay Conti by his side, saying “Get em, boys!” The Jericho Appreciation Society and Suzuki-gun’s Lance Archer and Desperado destroy Moxley and Tanahashi as Jericho announces his own match at Forbidden Door: Jericho, Guevara, and Minoru Suzuki versus Wheeler Yuta, Shota Umino, and Eddie Kingston. Speaking of which, Kingston, Sanatana, and a bald Ortiz help fend off Jericho’s goons.

A package highlights the continuing feud between Darby Allin and Kyle O’Reilly, two unconventional yet great wrestlers. On Friday’s Rampage, Allin vows to injure Bobby Fish like O’Reilly did to Sting.

Tonight’s winner advances to the four-person match at Forbidden Door for the new All-Atlantic Championship. Jim Ross is insistently high on Page, but his chances aren’t high against the returning Miro. Following picture-in-picture, Page runs Miro into the steel steps as Dan Lambert cheers on – as well as a hidden, masked Kip Sabian sitting ringside. Miro turns the tide when Page mocks his God, takes out Lambert, and makes his opponent submit with Game Over.

In a video package, Dante Martin – with Matt Sydal – has his sights set on Jon Moxley this Friday on Rampage. Good luck with that, kid.

Rebel and Jamie Hayter get involved pretty quickly, but Thunder Rosa at least runs the latter off. How poetic that the AEW Women’s Champion Rosa is in the background of a Baker match. After picture-in-picture, Storm delivers an absolutely brutal-looking hip attack into the corner to audible gasps, and a downed Baker repeatedly pushes her opponent away. St. Louis goes silent, but Baker was apparently playing possum – well done. Storm gets the victory over Baker with Storm Zero as Rosa returns to stare the victor down.

“Hangman” Adam Page heads in-ring to speak his mind, and he too is interrupted. Adam Cole appears and gives congratulations to “Switchblade” Jay White, who defeated Kazuchika Okada for the IWGP World Heavyweight Championship. The man himself blindsides Page and turns down both his and Cole’s offers at Forbidden Door. Bullet Club, evidently, still isn’t fine.

Tonight’s main event is a ladder match with tables and chairs present ringside – Christian Cage’s playhouse that he thrusted onto his champion buddies. That Cage breakup can’t come soon enough, by the way. Jungle Boy immediately impresses with a hurricanrana from the rungs, but Matt Jackson eventually suplexes him into a ladder. He’s powerbombed through a table while Nick Jackson delivers a table 450 Splash to Luchasaurus preceding picture-in-picture. Afterwards, Luchasaurus makes a comeback, but Matt eventually takes him out with a table elbow. The big man recuperates, scales the rungs, but is pushed off the ladder through four stacked tables ringside leaving Jungle Boy to himself. The champion is hit with a BTE Trigger, and both Matt and Nick unlatch the belts to become the first ever two-time AEW World Tag Team Champions.

Doctor Sampson and Cage help a fallen Jungle Boy to his feet, and the long-awaited turn finally materializes. Cage hits the Killswitch, grabs two chairs, and delivers a Conchairto to Jungle Boy with his mother and sister watching ringside.

That Christian turn was so worth the wait – what a fantastic moment to close the show. As for the remainder, even with Forbidden Door nearing by, the issues with AEW Dynamite are always the same. The matches are diverse and exciting, but it’s the in-between angles and segments that fall apart. Tonight was just a lot messier than usual, but a hot crowd helped make it palatable.