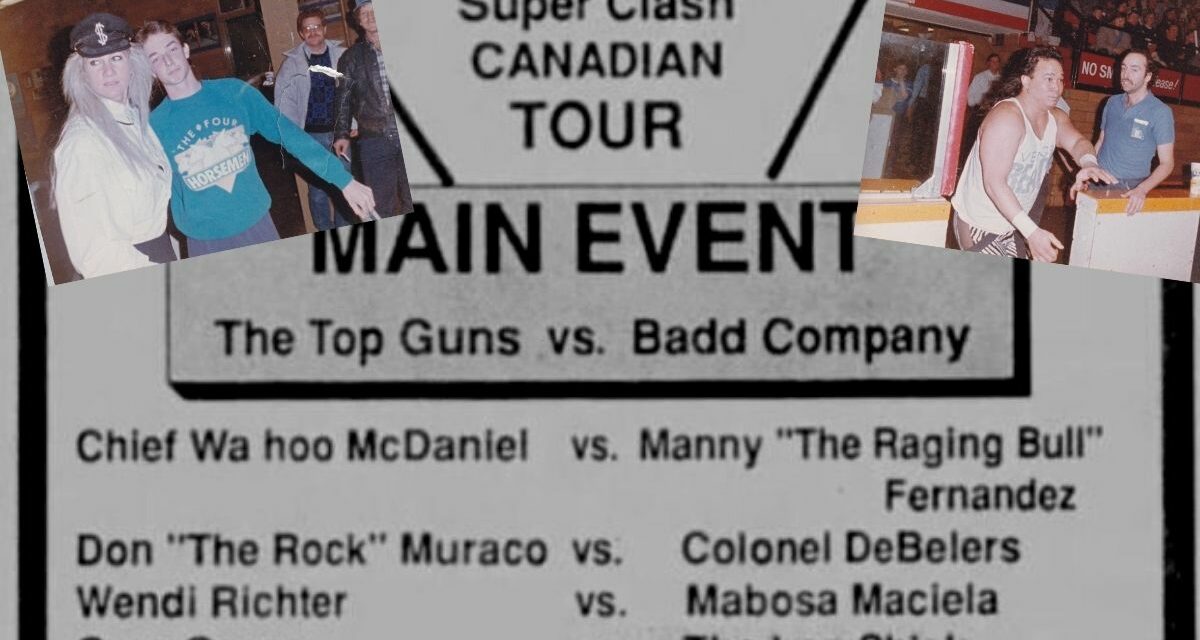 I’m a spelling nerd. You can’t really help but be if you are a writer. When I pick up the newspaper, I see spelling mistakes or grammar errors, or, given my many years laying out both papers and books, I’ll notice the little things too — bad breaks, a spot where the kerning was too much, where the design could have used more white space.

But hey, no one is perfect.

Especially not whoever wrote down this copy for an American Wrestling Alliance show in North Bay, Ontario, on December 28, 1988.

It’s funny because we’ll often get notes about an old article, “Didn’t you fact check this with Google?” Well, SlamWrestling.net predates Google, and many of those living with the riches of the current online world have no idea what life used to be like.

So, putting on my own personal wayback machine, here’s how these horrible spelling mistakes would have happened on the wrestler names.

The promoter, Tony Condello, likely called the local newspaper, and was put through to the ad department. Whoever took his call would have tried to both decipher his Italian accent and whatever he was trying to say about the wrestlers. (I really doubt he used a fax machine, which were around.) Then the newspaper ad people would have mocked up the ad with a rudimentary computer, printed it out, and it would have then been cut out by hand with a slicer and pasted onto a mockup for that particular page of the newspaper. In short, it was before full pagination had arrived. (How do I know? When I started at the Toronto Sun in 1991, even it didn’t have full pagination yet!)

Subsequent variations of the ad for the wrestling show corrected some of the spelling errors … or made them worse! 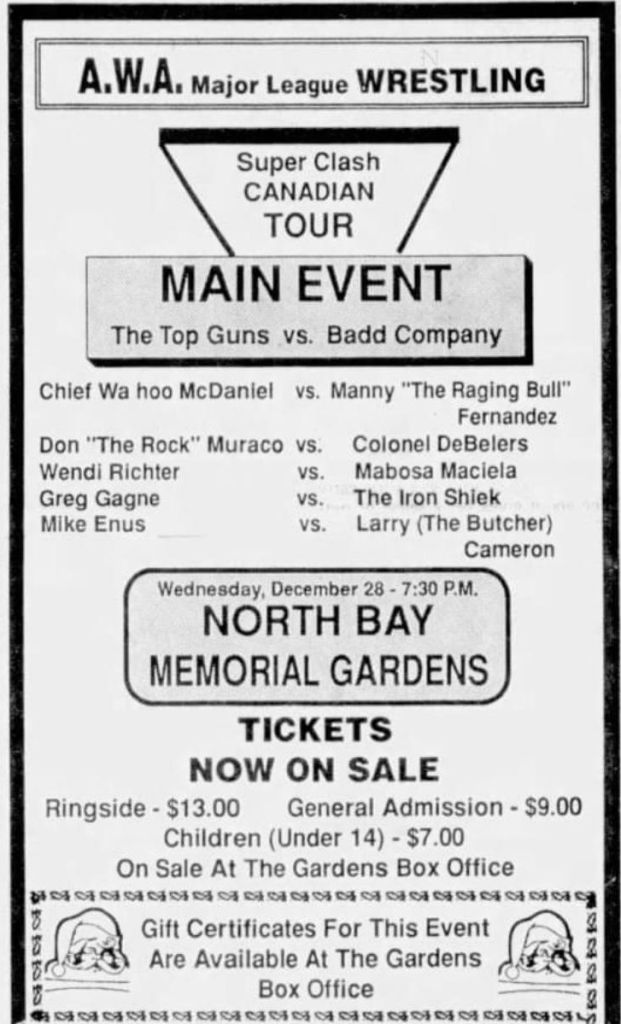 I’m not 100% sure where the above advertisement came from, as it was not in the North Bay Nugget newspaper archives. But I have reproduced some of those further down.

This all comes together rather magically.

Out of the blue, I get an email from Brett Farrell, who sent me some photos from the actual show, as they included Madusa Miceli, who I’m working on a book with. What a great find, and Brett agreed to send me the photos for a mini-photo gallery, which you see below. Brett is in one of the photos, and trained Hart Brothers in Calgary, under Lance Storm and Ed Langley, and wrestled as Big Daddy Hammer.

Then separately, the ad gets send to me … and I have to share the misspellings with both Madusa — who is wildly and dangerously intelligent and had a laugh — and the Colonel himself, DeBeers not “DeBeiers.” Ol’ Ed Wiskoski is a pal, you see.

Farrell shared a DeBeers memory from the show: “Col. DeBeers was a standout as well,” he wrote. “Being the mark I was, I loved having ‘inside information,’ so I asked him if he’d heard of Ed Wiskoski. He told me what a lovely guy he was, all while, more or less, staying in character. As I smartened up over the next few years, then broke into the business, I cherished those interactions more and more as I realized how easily those workers could’ve dismissed me.” 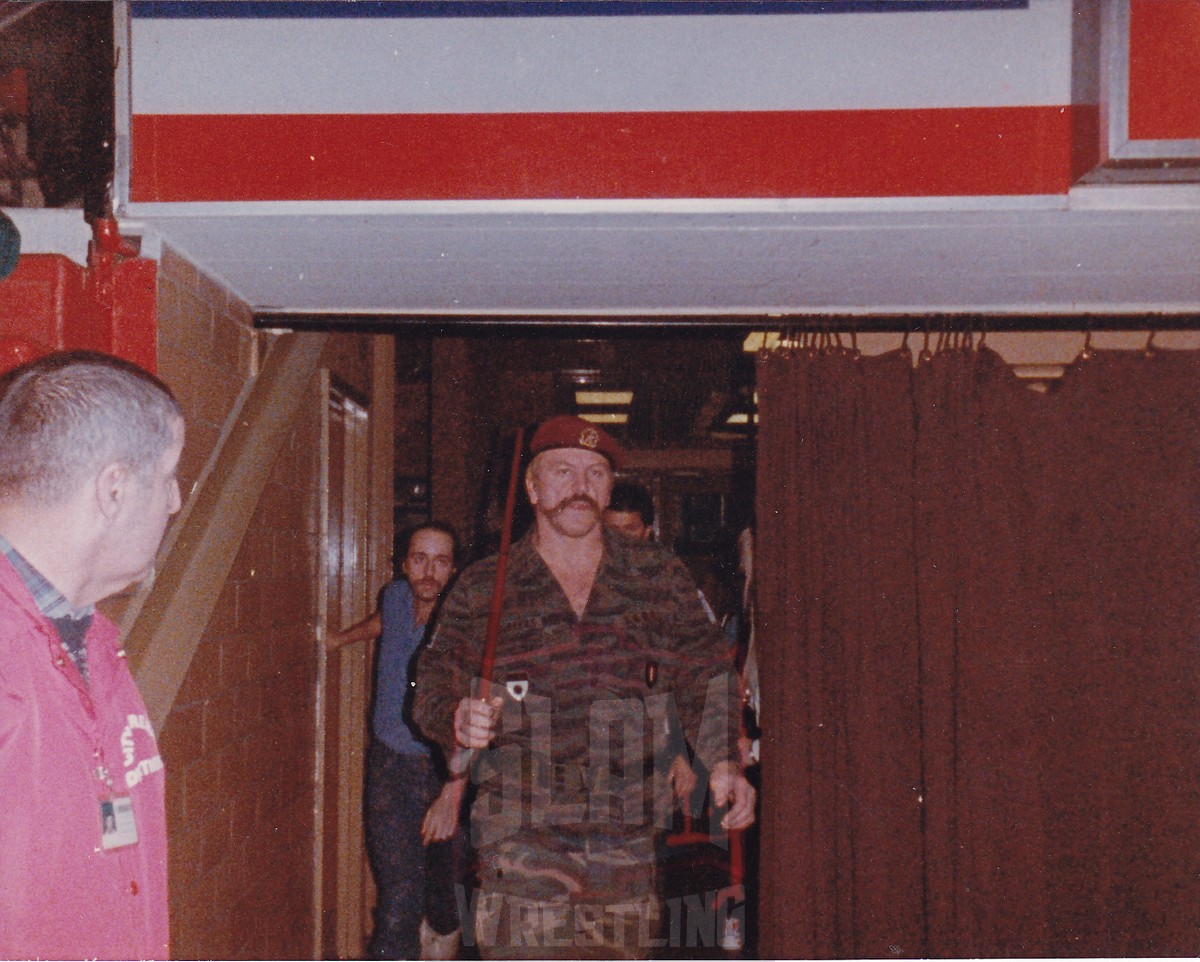 Colonel DeBeers heads to the ring in North Bay. Photo by Brett Farrell

These were the last shows that Condello promoted in conjunction with the AWA. He did a show in Winnipeg, on Boxing Day, that drew poorly. Then the crew drove the 20 hours to North Bay. Condello himself didn’t remember much about this show when asked.

There’s a lot to love about these photos too, from the small-time feel of the arena, which was home to the North Bay Centennials of the Ontario Hockey League from 1982–2002. 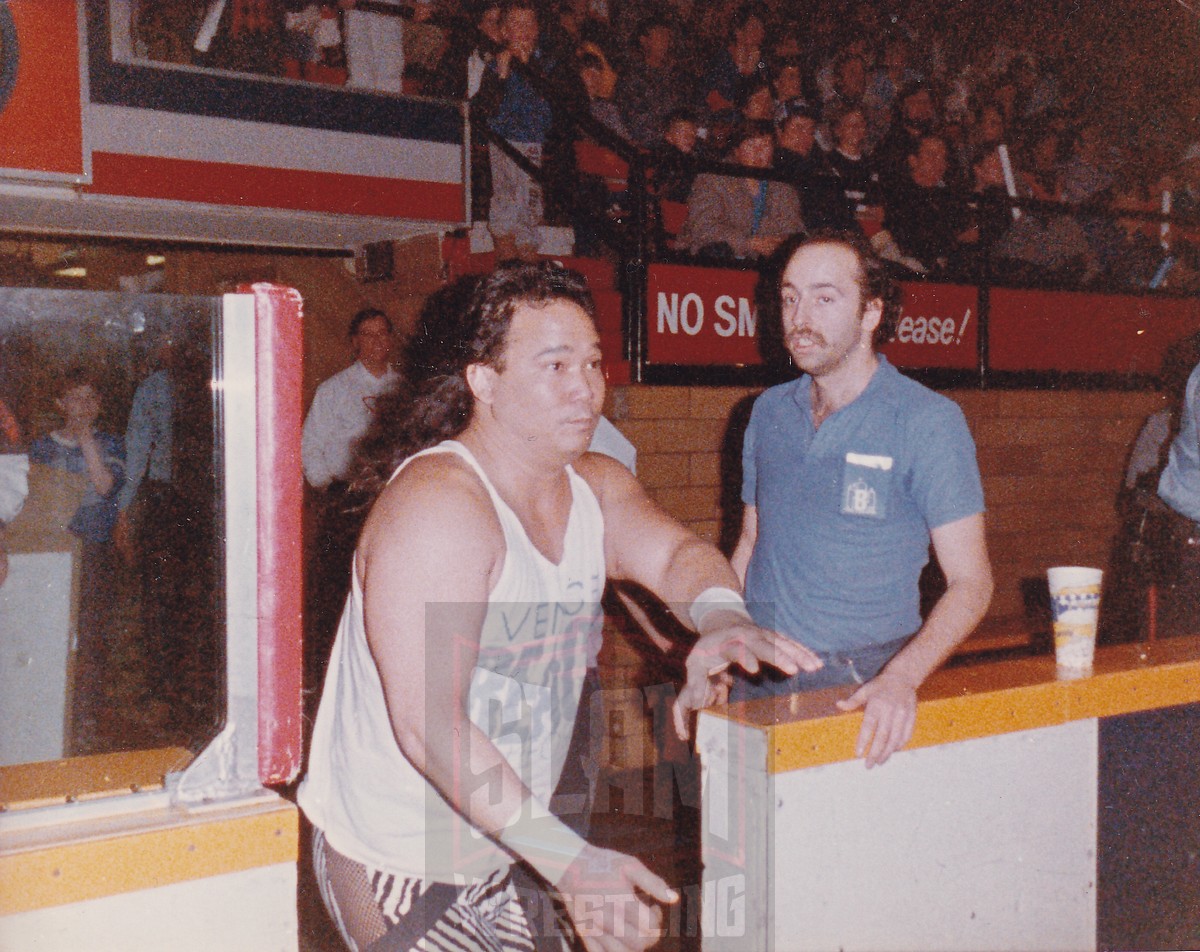 Pat Tanaka of Badd Company heads to the ring via one of the doors on the visiting team’s hockey bench in North Bay. Photo by Brett Farrell 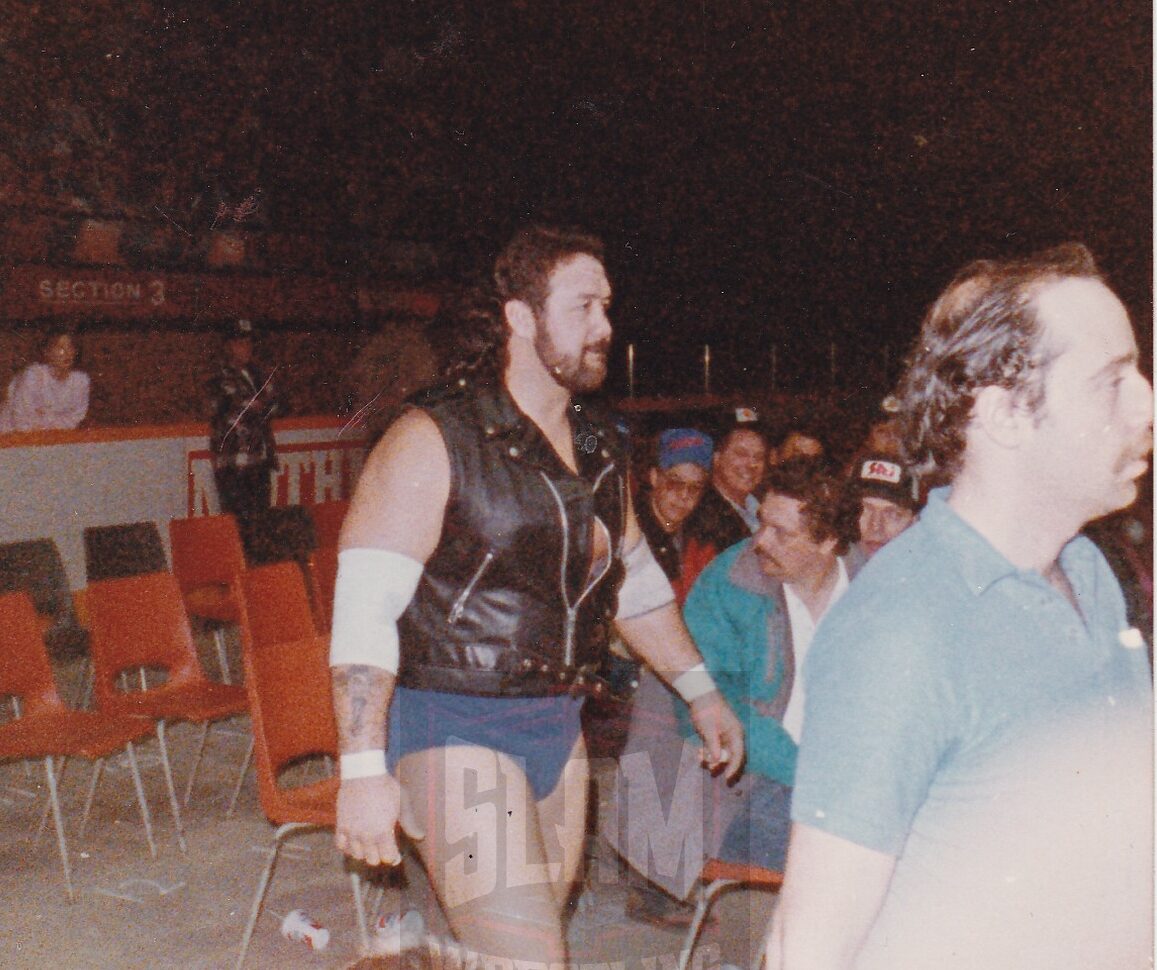 “Raging Bull” Manny Fernandez is all business, heading to the ring to face Wahoo McDaniel in North Bay. Photo by Brett Farrell 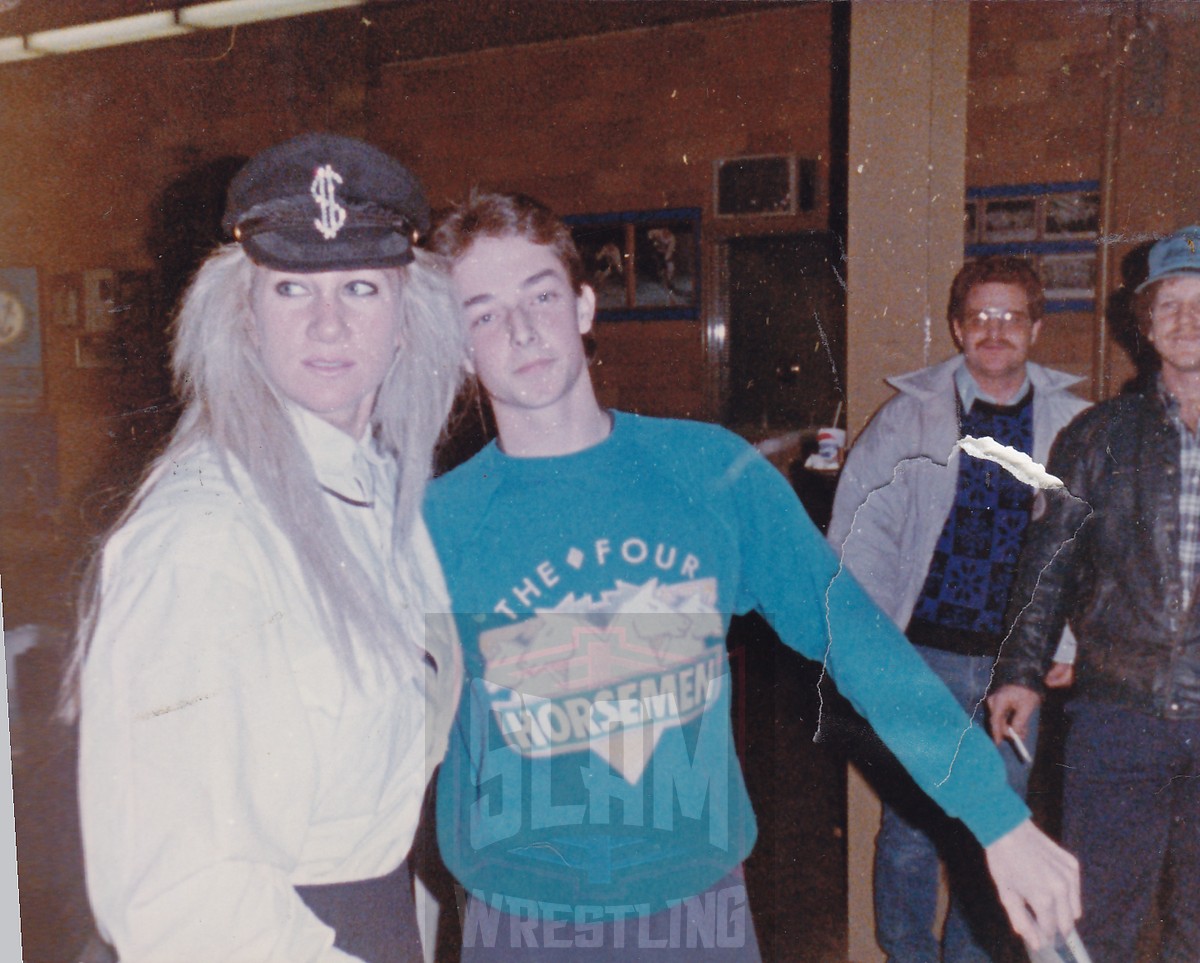 Madusa Miceli with Brett Farrell. “I was the BIGGEST mark on the planet, but she was incredibly sweet. As much as that’s her job, it’s North Bay. No one would ever know if she didn’t give us the time of day,” recalled Farrell. Photo by Brett Farrell

I’d never seen the resemblance between the Iron Sheik and “Mabosa Maciela” before! 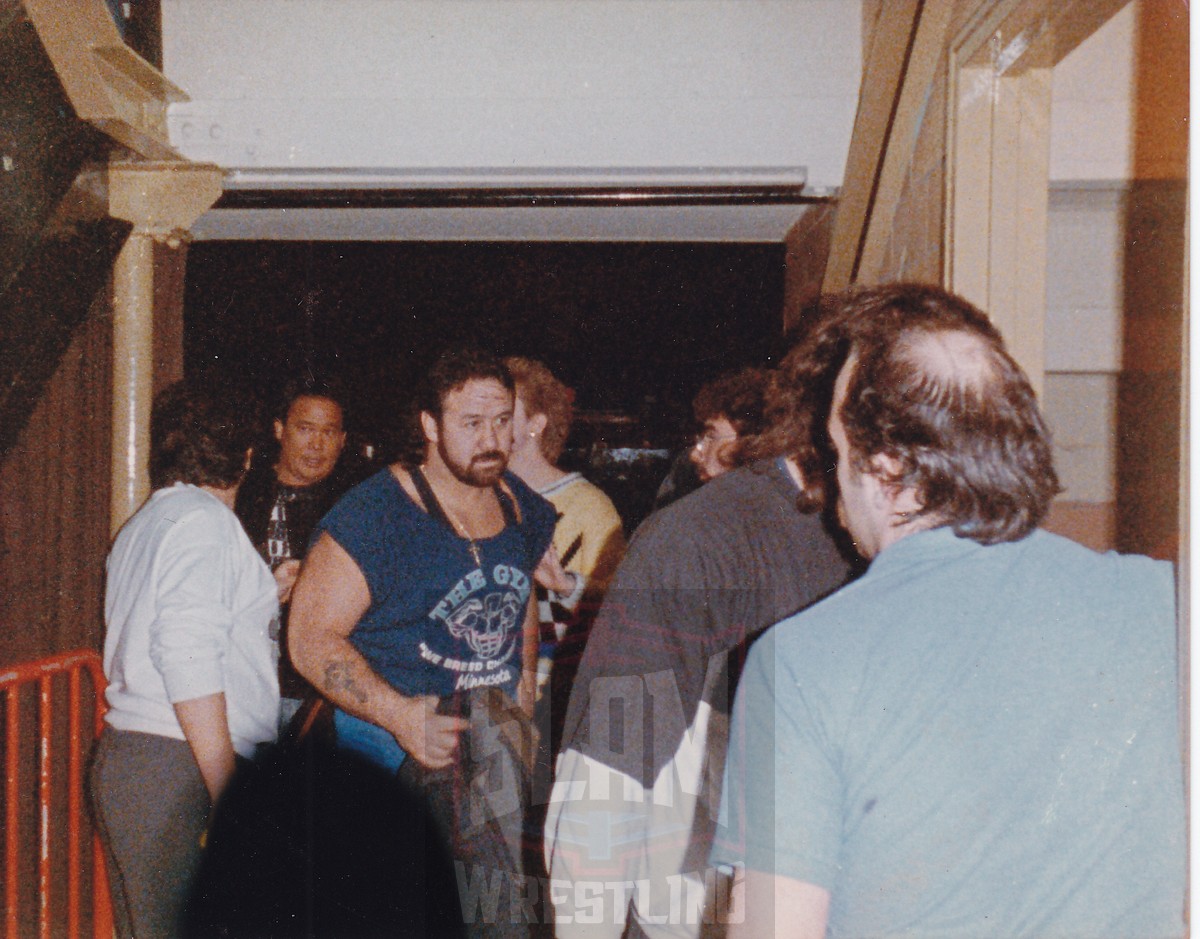 This one looks like the wrestlers are trying to leave — or maybe just arriving. Pat Tanaka is back left, and that’s “Raging Bull” Manny Fernandez carrying his jacket. Photo by Brett Farrell

EDITOR’S NOTE: The initial version of this story had Brett Farrell incorrectly labelled as Brent Farrell.