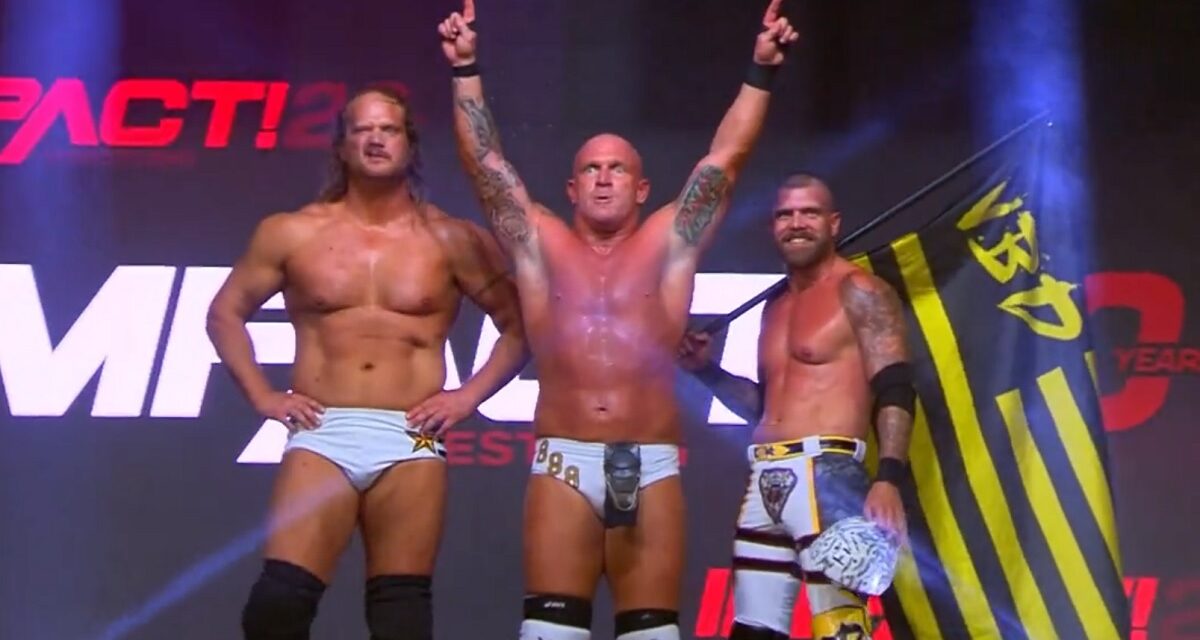 Eric Young insists that the world belongs to his faction, Violent By Design. When he challenges Impact World Champion Josh Alexander at Slammiversary, VBD will undoubtedly be a factor. And if they can successfully employ their cheating ways, just like they did against Alexander and the Briscoe Brothers on Thursday’s episode of Impact, it may turn out that the world title belongs to them as well.

The show kicked off with a new introduction video, paying tribute to the company’s original name, celebrating its 20 years of history. At 20 years, Impact has been around almost three times as long as the original ECW – think about that for a minute.

The two started off with a handshake, and it was noted that Shelley has become a mentor to Trey over the past couple of years. They started off very technically, gradually increasing the intensity level in a game of one-upmanship.

On the floor, Shelley turned things up by shoving Trey into the ring apron, but Miguel retaliated with a big Moonsault off the top to the floor. Then Shelley started working over Trey’s leg, and took control for a while, going for leg-based and other submissions. Miguel refused to surrender, and came back with some strikes and submission attempts of his own. After several minutes of more back-and-forth action, the pace quickened exponentially. Miguel missed a Meteora attempt, and Shelley hit a couple of huge Busters, getting a two-count both times to huge reactions from the crowd. They exchanged more finisher attempts, but in the end it was a roll-up by Trey that ended the match, and earned him a spot in the Ultimate X match for the X-Division Championship at Slammiversary.

This was a really good match, and the crowd was really eating it up by the end. Miguel has always been able to blend his aerial assault with a strong ground game, and he and Shelley had some great chemistry throughout this one.

Backstage, Gia Miller interviewed Josh Alexander and the Briscoe Brothers. They said that tonight’s match against Violent By Design should end the chapter between the Briscoes and VBD, and would show Eric Young how ready Josh Alexander is for their match at Slammiversary. When they were done talking, the Good Brothers approached the Briscoes and threw down the gauntlet, leading to some verbal sparring.

This one lasted a bit longer than most of Slamovich’s matches, and Havok got more offense in than most opponents – but not by much. In the end, Masha chopped down the larger Havok with some big kicks, and then hit the Snow Plow for the pin.

After the match, the rest of Decay – Crazzy Steve and Black Taurus – came to the ring, and they and Rosemary looked stunned by the result of the match.

This was another good showcase for Slamovich, and it’s clear they are pushing her as a juggernaut. Her badass persona is more of a ‘tweener than a clear face or heel, so they could conceivably put her up against any Knockout – including current Knockouts Champion Tasha Steelz – and it would work well.

In the back, Trey Miguel was given props by Alex Shelley, Blake Christian, and a couple of no-names. But Kenny King wasn’t so throw praise Trey’s way. He trash-talked Blake and Trey, leading to a challenge from Blake for a match next week where Kenny would put his spot in the Ultimate X match on the line. King accepted the challenge.

Rich Swann cut a backstage promo calling out Matt Cardona and challenging him for the Digital Media Championship. But before that, Swann challenged Matthew Rehwoldt to a match, so he could get revenge on Rehwoldt for costing him a spot in the Ultimate X match. On commentary, Rehwoldt accepted the challenge.

Early on, Grace simply overpowered Green, bashing and battering her all around the ring, including hitting a brutal Neckbreaker in the corner. But Green fought back and stunned Grace with a Boot to the Head that sent Grace to the floor. Green took over and got in some shots, but Grace fired back with a huge Spinebuster. Grace hit a Spinning Backbreaker for a two-count, but after escaping a Muscle Buster attempt, Chelsea responded with an Elevated Flatliner for a near fall. After some exchanges of strikes and power moves, Grace finally put Green down for good with a Grace Driver.

This was a slobberknocker of a match, though there were a few awkward moments where the cameras caught the two of them talking out their next spot. With both women in the Queen of the Mountain match at Slammiversary, Green’s loss here may be a way to diminish her perceived chances in that match, only to be a swerve and see her win it. Time will tell.

Impact Executive Vice-President Scott D’Amore was talking with a flunky in the back when he was surrounded by Honor No More, minus Maria. HNM accused D’Amore of turning a blind eye to the unsafe work environment that saw the Good Brothers hurt Maria last week. They wanted a rematch against the Good Brothers, but D’Amore confirmed that the Good Brothers would face the Briscoes at Slammiversary. HNM cryptically  warned D’Amore that if they didn’t get what they wanted, then nobody would.

In the back, Gia Miller interviewed Deonna Purrazzo, who will be in the Queen of the Mountain match at Slammiversary. Purrazzo was upset – but not surprised –  that Mia Yim came into Impact and immediately targeted her, as she said she was the top Knockout in the company and would prove it by winning QotM. This brought out Knockouts Champion Tasha Steelz and Savannah Evans. Steelz said she is the one who makes history, which she proved by winning the first Knockouts Ultimate X match. But Steelz acknowledged that Mia Yim is a problem they both shared, so she invited Purrazzo to be at ringside next week when Evans fought Yim, implying that the three of them could team up to take out Yim for good.

They started off by putting on a technical clinic, with a major highlight seeing Kazarian getting dumped over the top rope and hard to the floor in a Sheik Suplex type of throw. On the floor, Sabin took over with a well-placed Running Kick to Frankie’s face – that looked super. Sabin held the advantage for some time, increasing the punishment level of his moves as the match progressed. But Frankie found an opening and mounted a comeback, including hitting Sabin with a nice Springboard Legdrop, and a nice Slingshot DDT. Things got quicker and more impactful with both men hitting power moves for near falls, including a Release Belly-to-Back Superplex by Sabin.

Both men went down after a mid-air collision after simultaneous Cross Body Blocks. As they both struggled to get up, Honor No More ran into the ring and swarmed both men. The referee had no choice but to throw the match out, as both Sabin and Kazarian were laid out by HNM, who celebrated the heinous act they perpetrated.

This was really good before the frustrating finish. Can someone please consider a Best-of-Seven series between these two? Honestly, it’s like these two are timeless. Presumably this will lead to some kind of gang warfare at Slammiversary, assuming Sabin and Kaz can find some partners to help even up the odds.

Backstage, HNM boasted about what they’d done. They badmouthed Impact and said there was no reason for the company to celebrate its 20-year anniversary when it disrespects its top stars (meaning themselves). Heath and Rhino walked up to them and said that HNM were ungrateful to Impact who gave them all chances. They were all ready to brawl but a security team ran in and separated everyone before any punches were thrown.

Gujjar and Morrissey dominated in the early moments, putting the hurt on Singh, both individually and as using some teamwork. Some dirty tactics let Shera and Singh put some punishment onto Gujjar, and they did that for a while. Gujjar finally got the tag to a fresh Morrissey and he was on fire, leading to him dispatching Shera and then planting Singh with a huge Chokeslam.

Though Morrissey could likely have pinned Singh, he tagged in Gujjar to put Singh away with a Gargoyle Spear.

This was a good, basic tag team match. The crowd really likes Morrissey, and that should help give the rub to Gujjar if they keep this team going.

In the back, Gia Miller interviewed Moose who will be teaming with Steve Maclin next week against W. Morrissey and PCO in what might be the most random two pairings since the original WCW Battle Bowl. Gia asked Moose if he is worried about the fact that Sami Callihan has targeted him; Moose is not. Moose was issuing a threat to Sami, but then Maclin walked in and said Moose better clear his head of Sami-related thoughts next week and focus on their match. Moose said he was focused and wouldn’t let Sami be a distraction, but his reaction to a quick video hack – presumably by Sami – suggested otherwise.

Match 6: Josh Alexander and the Briscoes vs. Violent By Design

Alexander out-wrestled Deaner early on, and then the Briscoes just plain beat him up, though Deaner got in some licks in a chop exchange with Mark. He used an eye claw to drag Mark into VBD’s corner, but he regrouped and then it was Eric Young’s turn to get a beating from Dem Boys. Then all six men got into it, leading to a hard Low Cross Body by Alexander that sent Doering to the floor, followed by a Somersault Dive by Jay onto all of VBD on the floor, with Mark putting the icing on the cake with a Twisting Moonsault off the top to the floor, crushing all of VBD, to take us into a commercial.

After the break, they teased the Slammiversary main event when Alexander and Young went at it in the centre of the ring for a short spell, with Alexander getting the edge until some VBD cheating stopped his momentum. VBD isolated Alexander, allowing Young to get in some cheap shots, even busting up Josh’s nose at some point.

Alexander fought his way out of danger, leading to some more exchanges between the teams. A great sequence saw Young escape the C-4 Spike and dump Alexander to the floor where he was flattened by a massive Flying Press by Doering – that looked tremendous. Mark went for a Superplex on Deaner, but Deaner clocked him with Young’s hockey mask. Young hit a Piledriver on Mark and that was all she wrote.

After the match, VBD posed victoriously on the entrance ramp to end the show.

This was a really good match. Some people may question why the Tag Team Champions took the loss, but the way it was done was fine and doesn’t hurt them in the least. Indeed, the way that VBD’s cheating ways helped Young get the pin is very effective in building up Young as a threat to Alexander’s title reign, even if it’s only because of the numbers game.

With some really good matches throughout the show – and in particular the two matches that bookended the episode – this week’s Impact was very strong. Heading into Slammiversary in a few weeks, this one was very effective in setting the table for that event, while also setting up some big matches for next week. Impact continues to deliver some quality TV every week, and it’s a shame that more people aren’t watching the quality shows they’re putting on.