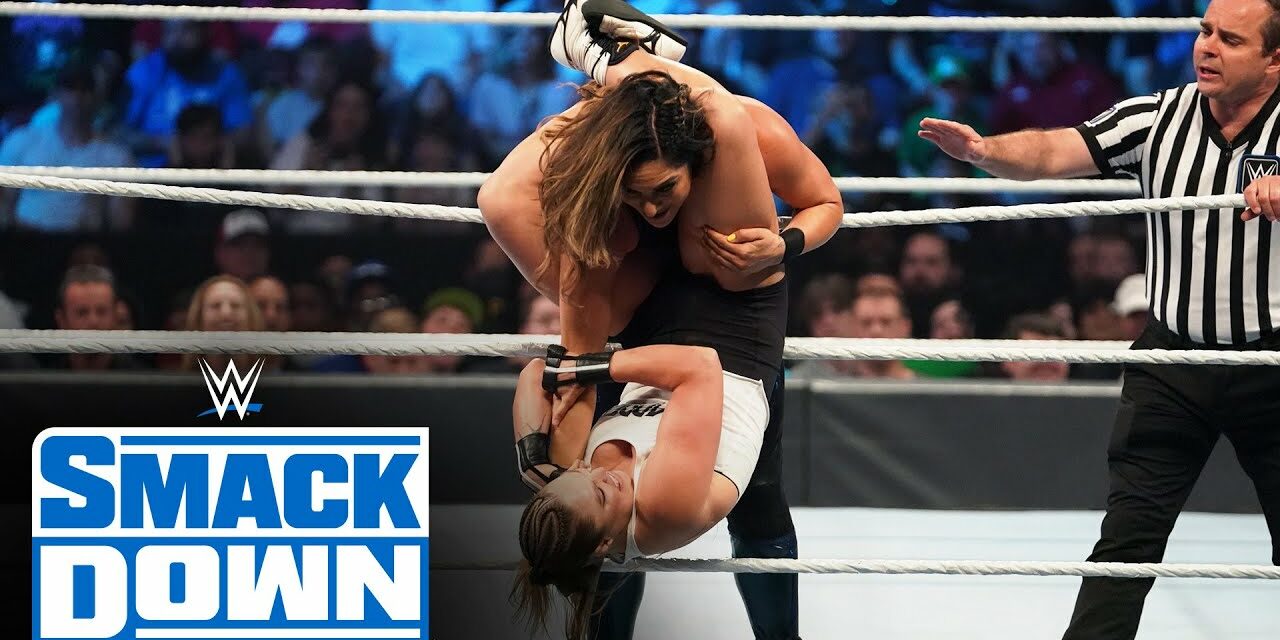 Last week’s match to unify the Tag Team Championships was the kind of mayhem I adored to see. I’m still thinking about those crying and confused children in the crowd. I laughed way too much.

I watched replays over and over. Because I knew the Usos would come out as bigger champs that I had nothing to complain about.

There was a moment I saw Randy Orton attempting to get up from outside the ring as if he just woke up from a nap as Jey claims the win. I felt like telling you guys how amazing it was being Randy’s inner voice for a minute.

Anyway, moving on from my insane tendency to mimic people’s inside voices, let’s get on to the brawling.

Shinsuke Nakamura shows up tonight challenging the Usos for their Tag Team Championships, literally a week after they won, with a new partner, Riddle.

I caught a guy wearing what I believe was a banana costume of some sorts waving a sign saying: “Put Cody in WWE 2022”. As in Cody Rhodes. Doi.

Nakamura welcomes his partner; Riddle’s music entrance’s first words are “bro”. What in the name of John Cena? I would rather go down a damn waterfall than hearing that again. Is he wearing shoes this time? No, he isn’t.

During RK-Bro and the Usos’ rivalry, Riddle has been the one on the brawling forefront while Orton felt absent to me. I’m wondering if anyone else felt like that.

Regardless of what tag team I see, the Usos seem to be the few who work as one with them being two people. Something Riddle and Nakamura will have to bring if they hope to win a prize.

Rodriguez appears tonight for another opportunity against Rousey for the SmackDown Women’s Championship. Every time she shows up on stage, Raquel shocks me like lightning to a street-post.

Backstage, Shotzi is seen getting Shayna Baszler and Natalya riled up to intercept Rousey and Rodriguez’ fight before they exit the changing room leaving Aliyah to lock Shotzi in. Again. How does this keep happening to her? The shade.

As we skip away from that, Rousey delivers multiple punches to Rodriguez’ mid-section, but in vain since Raquel uses her admirable strength to push Ronda back.

Ronda attempts to do another roll up move like last week, but Raquel kicks out in time. As Rodriguez places Ronda on her shoulder and stretches Rousey’s arms out for her to tap out, Baszler and Natalya show up to beat Raquel’s ass into a corner. Which turns into a tag match.

Baszler tries to further break Raquel’s leg by attempting to land on it using the ropes, but gets thrown outside the ring. Natalya taps in and so does Ronda. As Rousey enters the fight, the crowd starts screaming in excitement, but to me, they sound like squealing mice strapped to a fire resistant plate and shoved into a heating oven. It sounded more like terror.

Rousey drags Nattie by the arm like a whip before Natalya places Ronda into her ‘Sharpshooter’ move. Marvellous!

Raquel painfully seeks out to lift Baszler up, yet her knee gives way leaving Shayna to kick the back of her leg. Luckily, Rodriguez headbutt Baszler, goes for the second rope and ‘Corkscrew elbow drops’ on top of Shayna for a count. Unfortunately for the Quadruple Rs, that’s what I’m calling Rousey and Rodriguez, Nattie interrupts.

Raquel secures a win by plummeting Shayna with what Pat McAfee called the ‘Tahana bomb’. Michael Cole was confused.

Ah, Tinder is back. I thought after their little battle of the egos because of their lost against Ricochet, Shanky and Mahal weren’t going to be partners. Hm.

Humberto swings back and forth between the ropes before Shanky could land a boot to his face. Michael Cole thinks it’s as good as decapitation. I have to agree as I relished in the impact.

Later when Humberto jumps Mahal with Angel’s help, they both deliver slap chops to Jinder’s chest. Clap. Clap. Clap. Pain is all you hear. Angel has Mahal into a choke hold as Humberto tags himself in. Jinder manages to wiggle his way out of a tight grip, kicks Angel in face before throwing Humberto over his head leaving him to land on his back. Crack.

While watching this match, I was perplexed. After Angel kicks Mahal into the announcement table then brings him back into the ring, he proceeds to strut his hips and dick for this girl sitting on the sidelines. Shanky shadows him from behind and gives him a big kick to the jaw.

While such nonsense was happening outside the ring, Humberto take the win by knocking Mahal out. Wow.

Mahal and Shanky get into another pissy party, yet Shanky doesn’t seem phased by the loss as he starts dancing in front of the same girl Angel was strutting for earlier.

Adam Pearce opens his doors for Max Dupri, the male model from last week. Dupri really likes being close when he talks to Pearce about finding his first Maximum Male Models. The man doesn’t know what personal boundaries are. Damn.

Enough about that, it’s time for the KO Show with Kevin Owens as he welcomes Sami Zayn of all people where they debate amongst each other who is the liar and who is the moron. Zayn comes out wearing The Bloodline t-shirt and praising them, but apparently, that makes him a moron according to Owens. Ha! Is that it? A moron?

Zayn says that Ezekiel and his brother, Elias, aren’t the same person because of photographic proof while Owens says they are the same. Then he continues to call Zayn a moron and pretty much a pity addition to The Bloodline.

Zayn: “Liar, liar, pants on fire!” I cannot believe he mentally brought us all to a Kindergarten playground for a hot minute. I coughed and choked.

Since The Bloodline left Sami like dry chicken on Monday Night Raw, Owens wanted to prove that they don’t care about Zayn by calling the twins and Reigns out. And look at that. No one showed up.

I’m waiting for a creative, emphasis on “creative” way to end a KO Show without people getting knocked out by Kevin like he usually does. Something new won’t hurt, Owens.

When I said last week that I saw a future match where Ricochet teams up with Gulak to fight Gunther, I was just saying things and ended up being right. My vision came true.

Kaiser, Gunther’s mouthpiece, was an unexpected addition to this battle. I didn’t think he’d be as good as he is, but I stand corrected, or sit. Ludwig grabs Gulak into multiple choke holds before being told off by the referee, which gave Gunther ammunition to put a boot to Drew’s face.

Rico enters the ring and throws Ludwig using his legs then runs onto the second rope for a cross body. That enrages Gunther to enter as well, yet he immediately backs off as a distraction to roll Ricochet for a failed submission.

Ricochet gives a hard knee kick to Kaiser’s jaw, which sounds like broken teeth as Pat McAfee mispronounces Ricochet’s name for “Rico-stray” thinking no one would notice. Classic.

Ludwig grips Gulak’s hair, runs against the ropes and hard kicks him in the chest for the win. Even with Rico’s help, Gulak still manages to be the one who gets annihilated in the end. Kaiser fought this entire brawl on his own, but he still remains a side piece.

The New Day & Drew McIntyre vs. The Brawling Brutes

Basic. The Brawling Brutes is a basic name. If you don’t know who they are, the group is consisted of Sheamus, Ridge Holland and the rabid-infested animal, Butch.

Sheamus is the pimp of the group, Holland is the protégé while Butch is the mascot. I’m not sure which animal though. Stumping around like he’s been injected with some sort of serum.

Drew McIntyre is partnering with Kofi Kingston and Xavier Woods as their mystery guy. Pat McAfee was hoping for Moby Dick to show up for some reason while I was praying for Shaggy from Scooby-Doo.

As the fight begins, Butch pushes Woods and Kofi then tries to hit McIntyre, but he dodges with a look on face that says “the f*ck you doing” as Butch rushes back to Xavier.

Good teamwork between Xavier and Kofi as they perform fist loads of back-to-back hits towards Butch, yet fails to submit him. McIntyre gets tapped in to fight Holland, and the fans squeal like mice, again.

McIntyre backs Holland into a corner for a belly-to-belly throw over his shoulder. Out of nowhere, Butch seeks out to jump Drew from the top rope, gets caught, backed into the turnbuckles and thrown over Drew’s shoulder.

Drew prepares to slap Ridge into ‘Claymore Country’ for the win. McAfee called them “The Drew Day”.